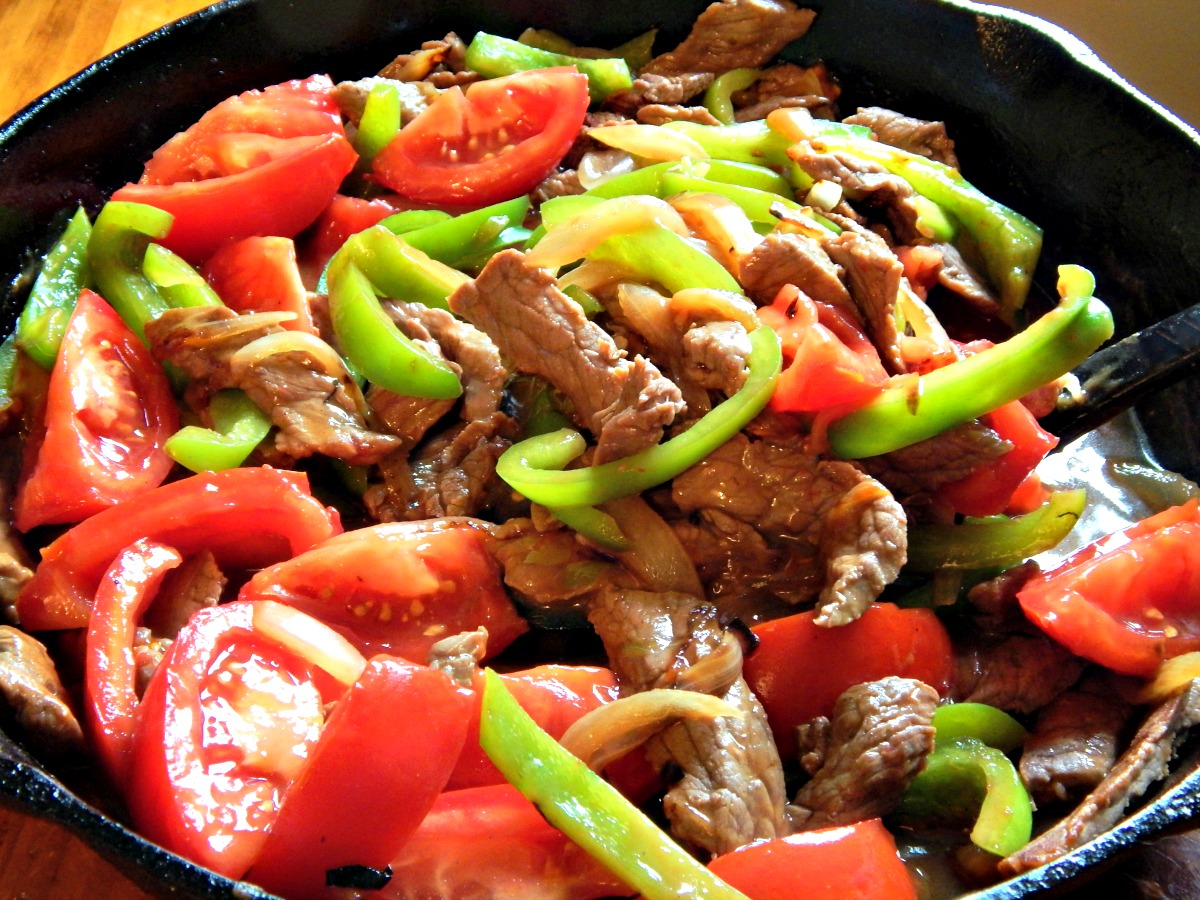 A light hand transforms this often ordinary and rather lackluster buffet staple into a gorgeous dish of flavorful beef, tender/crisp peppers and glistening tomatoes. Minutes to make, Beef with Bell Peppers and Tomatoes has long been one of our family’s go to dishes in mid to late summer when the tomatoes and peppers are in season.

Growing up in Iowa, lots of beef was simply a matter of fact in our household – we just didn’t know any different or better. Having a garden meant we’d run out and pick the peppers and tomatoes. But where and how my Irish/German mom got the idea or the recipe for this classic dish remains to this day a mystery.

Regardless, this became a favorite recipe, passed on to me by my Mom, and then to my kids by me. One problem I noticed, though, as an adult I had a chance to sample this dish in restaurants…even though many versions I tasted were overly salty, overly intense or overly cooked, there seemed to be a “dimension” in my recipe that was missing.

Browsing the Asian Grandmother’s blog (one of my favorites – you may recall that Pat taught me how to turn out a fantastic Fried Rice) I came across Pat’s post on her Beef, Tomato and Green Pepper Stir Fry in which she remarks, “2 teaspoons fermented black beans or “dow see,” rinsed and drained (optional but highly recommended.)” Her recipe also has Oyster Sauce. I had my “aha” moment. Adding both to my Mom’s recipe transformed a wonderful dish into one that surpasses any restaurant version I’ve ever had.

Although lacking a few ingredients, it seems Mom had a good grasp on the fundamentals of how to cook this dish – she knew to keep the vegetables fresh and vibrant, crisp and tender, and to make certain the meat was just cooked through. While my Mom often used a cut of sirloin and others often use flank, I use a simple, inexpensive round steak, a cut that really brings the flavor but once over cooked turns tough, dry and tasteless. You’ll need to watch it carefully – make sure it’s still pink when you add the cornstarch slurry.

Thanks Mom – and thanks Pat! And to all who are reading this, the recipe below is my family’s version with the additions I learned of from Pat Tanumihardja. To see Pat’s version, please visit (and browse her blog) at The Asian Grandmother’s Cookbook blog. Her stories are wonderful and her recipes just as good! I have a long list in my head of what one’s I want to try next! With the additions from Pat, my recipe comes dangerously close to her own…I hope she’ll forgive me as I wanted to get this post out on my blog for my sister and daughter.

Be sure to read my strategies, below, to see how I bring this recipe in on a budget and buy the round steak at a bargain price! Serve with rice, pass the soy sauce and enjoy! Cost for the Beef, Bell Pepper and Tomatoes, about $4.60, the rice 28 cents. I estimated about 20 cents for the sauces and sherry.

Freeze beef for about 30 minutes until stiff, but not frozen. Slice into sections about 2 inches wide, then slice strips from the sections by holding your knife at an angle and cutting across the grain into 1/8″ slices. Place in bowl with marinade and toss together. Cover and refrigerate for 30 minutes to overnight.

Heat oil in a large skillet or wok (I like to use my large cast iron pan) until hot. Add onion and cook until nearly soft, stirring often. Add garlic, green pepper and dow see, and stirring often, cook until green pepper is slightly softened, but still crisp. Remove from pan and set aside.

Add remaining oil heat briefly. Add meat (cook in batches if using a wok) and cook, stirring often, until the meat is mostly cooked but still pink. Watch carefully as this takes just a moment, and if overcooked, meat will be dry and tasteless. While meat is cooking, mix a slurry of cornstarch by adding the tablespoon of cornstarch to a small cup and adding the 1/2 cup of cool water, a bit at first until it is mixed, then the remainder of the water. As soon as the meat is pink, add the cornstarch slurry, stirring until it comes to a boil.

Quickly add the vegetables back in along with the tomatoes and cook for a moment longer until the tomatoes are heated through. Remove from heat.