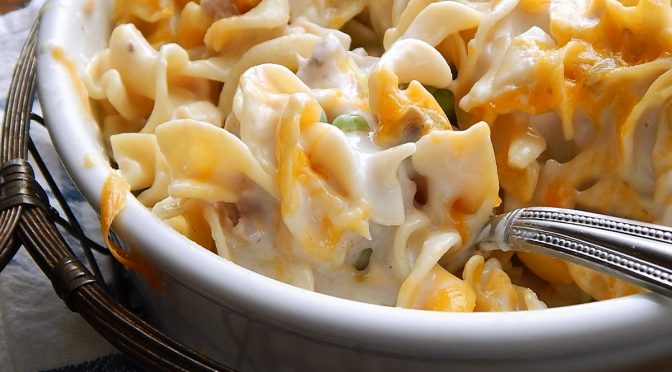 While we probably all know or at least have had a brush of some sort with Meta Givens Tuna Noodle Casserole Supreme, like many recipes made by so many people, it kind of morphed in the passing. And so what had the potential to actually be a pretty decent dish so often turned into, sorry guys, but I gotta be truthful, a hot mess.

When I pulled out Mother’s worn copy of Meta Given’s Modern Encyclopedia of Cooking it was fun to see the original Tuna Noodle Casserole Supreme. Not only was there the familiar potato chip topping, but a cheese topping, too.

Never being one to ruin a good potato chip, I’ve used the cheese topping. Besides chips are pricey! If I’m buying them, I’m having them with dip while watching a movie! I know many won’t agree with me, and a lot of people think the potato chips are the best part, so I’ll leave the topping up to you. Cheese or Potato Chips – or maybe even both?

The biggest surprise about the recipe was there were hard-boiled eggs. I’m a child of the 60s and had never heard of it. It took me a beat to wrap my head around that! But I was all about going back to the original and took the leap. They actually turned out to be the best part. I suppose they are kind of like Creamed Eggs. If you haven’t made the casserole with the hard-boiled eggs, you might want to take that leap, too!

I had too many casseroles as a kid that looked like this!!

How to Make Any Tuna Noodle Casserole Better:

As I revisited the recipe (It’s been at least 40 years since I’ve had or made Tuna Noodle Casserole) I found several things that put this casserole a cut above those I’d had in the past:

My recipe, below, reflects Meta’s actual recipe for Tuna Noodle Casserole, but sometimes I like to change things up:

First of all, if you want to avoid canned soup, check out my recipe for just the right amount of white sauce to replace any canned soup. Start with fresh mushrooms, sauteed, then add in the flour, and maybe just a hint of thyme. A pinch of nutmeg in that sauce would never be wrong. Just sayin’. The link is at the bottom of this page.

I can’t resist adding just a little splash of Sherry to this casserole if I think of it at the time I’m making it. It works whether you’re using canned soup or making your own sauce. Just a teaspoon. 🙂

So make the recipe exactly or riff a bit, but make it! I think you’re gonna love it!

Saving Money on this Recipe:

While it’s easy to think of food as seasonal and know that usually, the prices can be lower, the seasons aren’t the only “cyclic event” that drives the price of food. Twice a year you’ll usually see all kinds of fish and seafood drop to a low and that includes the canned stuff, both tuna, and salmon.

Those time periods are around Christmas, starting with Advent and leading up to New Years (the Winter Holidays) and the Easter/Lent season, which varies every year by a few weeks and starts in the Spring. To be using sales priced tuna you should literally be watching for the low and buying it for the year during those time periods. Figure out how many cans you use a week or a month and multiply out how many you should buy. You might see a surprise sale here and there but it’s rare to find a lower price than during Lent. Those links will take you to my posts on what to stock up on around those holidays.

Canned soup and noodles are basic pantry items. Stock up on sales (and the sales are often fabullous on canned soup around any holiday – see my post Winning at the Grocers.) If you’re interested in making your own canned soup substitute, see my Cream of Anything Soup. Freeze anything containing flour for three days when you bring it into the house to avoid any “peskies.”

Of course, you can’t really stock up on dairy products or eggs, but I often find when I have the room if I buy more when they’re at a low, again often around holidays, but usually Mother’s Day, Christmas, Easter…”brunchy” holidays, I can be eating those sales priced eggs for awhile. The cheese I do watch for on special and stock up at sale prices. It lasts for weeks in the fridge and in a pinch can be frozen; it gets a little crumbly one frozen and isn’t good for slicing or eating out of hand but works for casseroles like this.

This is the definitive tuna noodle casserole so many of us grew up on; you might be surprised by just how good it can be!

Drain well in a colander and rinse with hot water. Peel and slice eggs. Meanwhile, drain oil from tuna and discard.

Arrange layers of noodles, sliced egg, flaked tuna and peas in a greased 6 cup casserole, beginning and ending with noodles. Heat mushroom soup (in same pan used to cook noodles) and add enough liquid from peas (or milk) to fill mushroom soup can.

Stir to keep smooth and heat to boiling. (My note:  in the old days, it was always recommended to cook anything from a can to boiling – it’s not necessary today; just warm it up, on the stove or in the microwave.)

Pour over the tuna noodle mixture in the casserole, pushing mixture very gently aside with a fork to allow liquid to run down to bottom. Top with grated cheese and bake in a moderately hot oven (375 degrees) for 15 to 20 minutes or until mixture is hot through and cheese is a temptingly brown color. (my note: temptingly brown? Just cook till cheese is melted and casserole is hot and bubbly.)

Let sit for several minutes and serve directly from casserole.

Meta’s Note: One cup of crumbled potato chips may be substituted for the grated cheese for an unusually flavorsome topping.

If casserole is not heated until bubbly, the sauce will be thin.

Many recipes change up the amount of liquid. For the best casserole follow the 1:1 ratio of soup to milk and you’ll be rewarded with a casserole that has a lovely, creamy sauciness to it.

How much and what kind of Tuna is safe to eat? Check out this handy calculator by Colin Dunn of Planet Green. Hint: light tuna has much lower levels of mercury than Albacore.