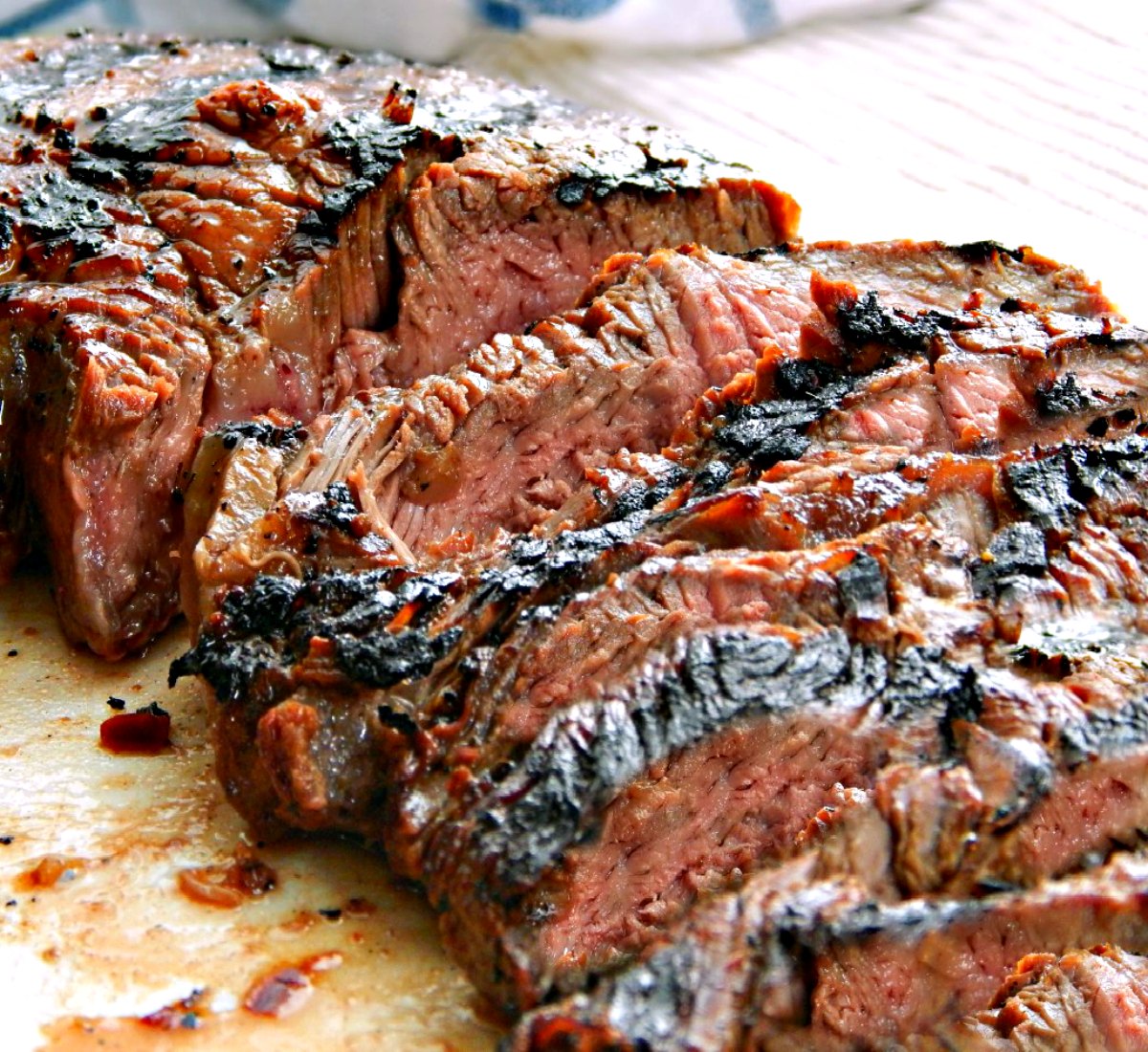 When it comes to summer grilling, there’s one recipe that’s stood the test of time, been around forever and has kind of a cult following, even today. It’s Teriyaki Marinated Steak. You might just know it as London Broil. And it IS an American classic in spite of the name London Broil and that scrumptious Asiany marinade. More on that, below. I know I’m not alone in this memory, when way back in the 70s, on a pretty regular basis, my Mom would marinate up this Teriyaki Steak and Dad would cook it up outside on the grill.

My Dad was pretty much a master griller back in the day on his old Weber, and once finished, he’d proudly bring in this marinated London Broil in, all seared over a hot fire, dark and crusty on the outside, tender, and rare in the center. And that, folks, is just how you want it. As a matter of fact, Dad and I cooked this one up today! And the smell alone brought me right back in time…um where are those bell bottoms?!

It’s really the marinade AND the grilling that makes this steak so absolutely delectable. I never knew where Mom got her recipe until  Yinzerella (I just love her – she’s a hoot!) wrote a post from the Williamsburg Cookbook on her blog, Dinner is Served 1972. I recognized it as the exact same recipe my Mother made; Mom picked up that cookbook on a vacation in the early ’70s and I still have it today. Obs, I didn’t look at it too closely or I might have seen it, so thanks Yinz for posting and reminding me of this wonderful recipe!

I did up the game on that marinade, it’s still a classic, just a bit “extra” because we have so many more ingredients available! So why not use Mirin instead of Sherry? Why not add in a few red pepper flakes and a dash of sesame oil…well you have the idea, and it’s all in the recipe, below. I need to note, no matter how good any marinade is, how much flavor it adds, scientifically it’s been proven that marinades don’t tenderize! It’s not overcooking this cut of beef, resting it and slicing across the grain that’s so important to keep it tender.

But before I go on, I gotta tell ya about that vacation – it was sheer h e double hockey sticks. Excuse my French. Three surly teenagers and the folks stuck in conversion van (which I seem to remember as being a goldy beige with an airbrushed figure of a Native American woman, could be wrong there, and hope I am, with shag carpet everywhere, walls, maybe on the ceiling and an abundance of pleather) for hours and hours at a time. 10, 12, 15, 97 (ok the last was an exaggeration) hours.

About the Cut London Broil:

“Up until the last few years, London broil meant just one thing — broiled flank steak. … London broil, which is very lean and therefore much favored by dieters, has become increasingly popular of late, and the demand for flank steak has risen accordingly. So now supermarkets and butchers are beginning to market all sorts of different cuts under the name of London broil — sirloin butt or rump steak, rib-eye steak, even top round. It is the thin, fibrous flank steak that makes the best and most authentic London broil, provided it is cooked and carved correctly.

Things can get even a bit more confusing: London Broil (which is American, not British) may not refer to the type of beef at all! London Broil, over the years, has come to refer to the method so often used with flank steak or any of the other cuts masquerading as it, that is marinating and then grilling it hot. I asked my Aunt Mary, long after Mom passed away what cut they used for this recipe. She said something like a large sirloin (she means a top sirloin) or a top round.

So here’s what you need to know about making the best Teriyaki Marinated Steak – London Broil:

The best way to save money on this recipe is to watch the summer sales, especially around any summer holiday and time your big beef-eating urges around those sales rather than thinking, “Beef sounds good” and buying it then. It’s going to make a huge difference as stores can get very competitive with the sales and specials around any summer holiday. They want to get you in the door.

The next is to use a couple of little strategies when it comes to steak. The first, you’re going to do anyway, slice it and serve a few slices per person. Either serve it up on plates or just bring part of it to the table. Serve lots of sides, which will make everyone full without them scarfing down every scrap of this delicious beef. Lastly, plan for leftovers, a little strategy I call “divide and conquer.” While the beef is the star of the show the first night, it comes back another time or two in recipes where it plays a secondary role. You get to average the cost of that beef over several fantastic meals.

But the best thing about saving a little of this Teriyaki Marinated Steak back? I’m going to show you how to rework that steak. No-one will ever know it’s leftovers! The first is my Simple Steak Tacos and my other is California Steak Salad. They’re both shown above. And my favorite side with this steak? Mom always served these with her Foil Pouch Potatoes and salad. I love this with my Grilled Vegetables with Tonkatsu Sauce. No tonkatsu? You’re not alone! There’s an only minutes to whip up, easy version in the recipe if you can’t buy it.

In a small bowl, combine all the ingredients except steak and green onion. Add steak to a large resealable plastic bag. Add marinade ingredients. Seal and turn to coat; refrigerate for several hours or overnight, turning now & then.

Drain and discard marinade from steak and lightly pat dry, leaving as much garlic and ginger as possible on steak. Let sit at room temperature for 30 minutes.

Preheat grill to high, turn down to medium and add steak. Cook, turning once, over medium heat three to five minutes on the first side (until fairly charred) and two to three minutes on the second or until desired temperature is reached.

Let stand for 15 minutes and slice thinly across the grain. Sprinkle with green onion if desired.

Today, of course, I’ll be linking to our very own Throwback Thursday Link Party, hosted by Quinn of Dad What’s for Dinner, Meaghan of 4 Sons are Us, Alli of Tornadough, Carlee from Cooking with Carlee and Moi! That’s right – me!

Click over to our latest Throwback Thursday post for links to their blogs and social media, rules and more info or, as always, to see all the links or add your own, click on the little blue frog, below.

And, as I do almost every Friday, I’ll be linking up to Angie’s Fiesta Friday Number 129! Many of my fave bloggers hang out there every weekend and this week’s co=hosts are co-hosts this week are Jhuls @ The Not So Creative Cook and Colleen @ Faith, Hope, Love & Luck.