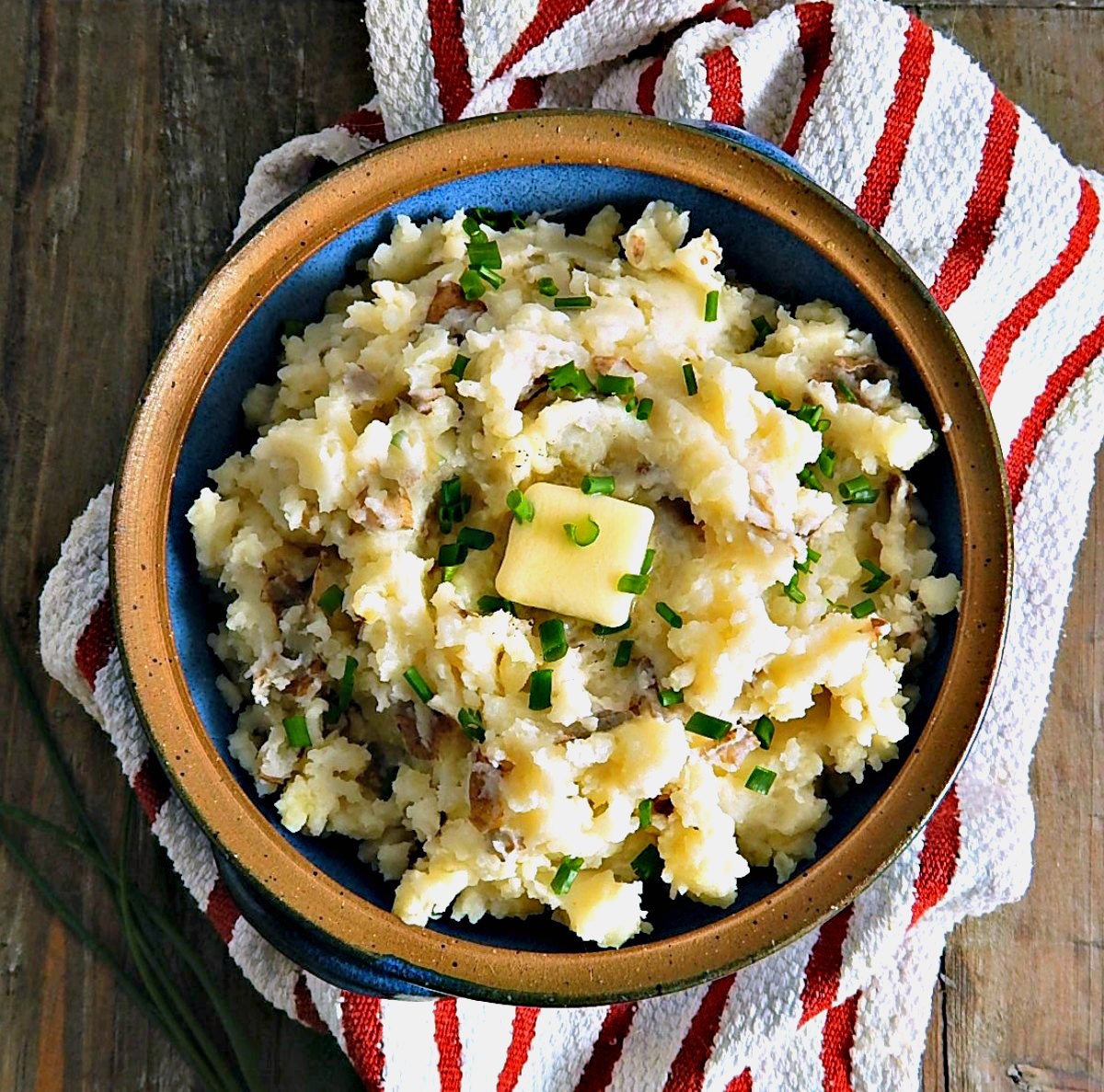 Mashed potatoes have to be my ultimate comfort food – if I were stranded on a desert island and had a choice of only one thing to eat, potatoes would probably be my first choice. And if I were watching what I eat but still wanted hearty potato flavor? I’d choose to make Simple Rustic Mashed Potatoes. Umm. wait! I need a little milk and a smidge of butter, too. And salt, please? Dang, maybe I should have just chosen ice-cream after all!

In the last decade or so the potato has fallen from the rank of “superfood” to near vilification as the sweet potato has risen to the ranks of stardom. The truth is somewhere in the middle; both our plain old potato and the sweet potato bring something to the table; each has its own blend of important nutrients. And in both potatoes, the majority of the nutrients is right under the skin.

The potato, like many foods, isn’t necessarily bad by itself, but the problem with the potato is the same one that’s plagued those who live on a budget for centuries: Potatoes are downright delicious and it doesn’t hurt that they’re cheap, filling and keep the navel from touching the spine as they say. It’s easy to serve up huge servings of the cheaper items in the meal.

If you’re serving potatoes, they’re taking up space on your plate and in your diet that could potentially be taken by more nutritious items. Potatoes are fat, sodium and cholesterol free and do bring more potassium than a banana to the table as well as quite a bit of vitamin C, but pale in comparison to some of the other vegetables.

And we can’t forget that potatoes are a perfect foil for almost anything fattening you want to throw at them: butter, cream, sour cream, cream cheese, bacon, cheese, and so on. It’s easy to load your potatoes up with all kinds of stuff that’s really not so hot for ya. So while I might go all out for company, a special dinner or a holiday, I like to make these Simple Rustic Mashed Potatoes for every day. They have just smidge of butter and a whisper of salt and the potato flavor just shines through.

If you are looking for something even healthier than my Simple, Rustic Mashed Potatoes, think about this Parmesan Cauliflower Mash.

Back in the day, I learned by trial and error how to make mashed potatoes. No one had a “recipe” and I’m sure most people would have shaken their heads at such an idea. There’s an Irish saying “A potato per person and one for the pot,” and that’s pretty darned close. A medium sized potato is about 5.3 ounces. For this rustic recipe with the skin on, I like to choose smaller potatoes – that maximizes the good nutrients (and fiber) and the flavor, too. Small russets are just fine, but this works incredibly well with baby potatoes, too,

Boil the potatoes in their jacket, whole if they’re small but just cut in half if they’re larger. Potatoes cook faster when they’re cut in small pieces, but taste better if they’re cooked whole or in larger pieces. And the more flavorful the potatoes, the less likely you are to want to add a lot of “stuff” to make them taste good, right?

When you’re making Simple Rustic Mashed Potatoes, the more you smash and mash them, the starchier they’ll get and the more milk you need. These are meant to be rustic and chunky and drop-dead simple, so watch it and hold yourself back a bit.

Mashed potatoes are pretty cheap to make, especially this healthier version that has very little butter and just plain old milk. I kind of try to trick the eye. I always make sure that I have at least a little pat of butter right on top and I swear it makes me think there that there is more butter and more richness in the potatoes than there is. And I know better!

Since I like to NOT have any leftover mashed potatoes, I try to get as close to the mark as possible. In my family, it seems that no matter how many I make, they’ll get gobbled up, so I try to minimize gluttony by making “just enough.” If you have a kitchen scale, you can weigh your potatoes until you get the idea of what a medium-sized potato looks like or you can judge by the bag: check the pounds in the bag, and visualize how many are a pound, then add another to make the 21 ounces (approximately) you’ll need for the recipe. If you do have leftover mashed potatoes, think Potato Cakes.

Potatoes are always cheapest in the larger bags and keep well in a cool dark place (like a loosely closed paper bag) away from onions. Since the large bags often have odd sized potatoes, I go through and pick out the larger uniform ones for baking or other recipes where size matters and use the smaller or oddly shaped ones in recipes like these Simple Rustic Mashed Potatoes where it doesn’t make a difference.

Add potatoes to a large pot along with salt and water to cover. Bring to a boil, turn down to a good, hard simmer and cook for 20 to 25 minutes until tender. Cook until easily pierced with a fork or knife. Drain and return potatoes to pot to keep warm. Mash by hand with a potato masher to desired consistency. Add the three teaspoons butter and milk, buttermilk or broth and stir until combined. Add salt and pepper if desired. Add the last teaspoon of butter to the top and garnish as desired. Keep covered to keep warm.

Note: The proportions work well for a rustic, rough mash. For a very smooth mash, more liquid may be needed.