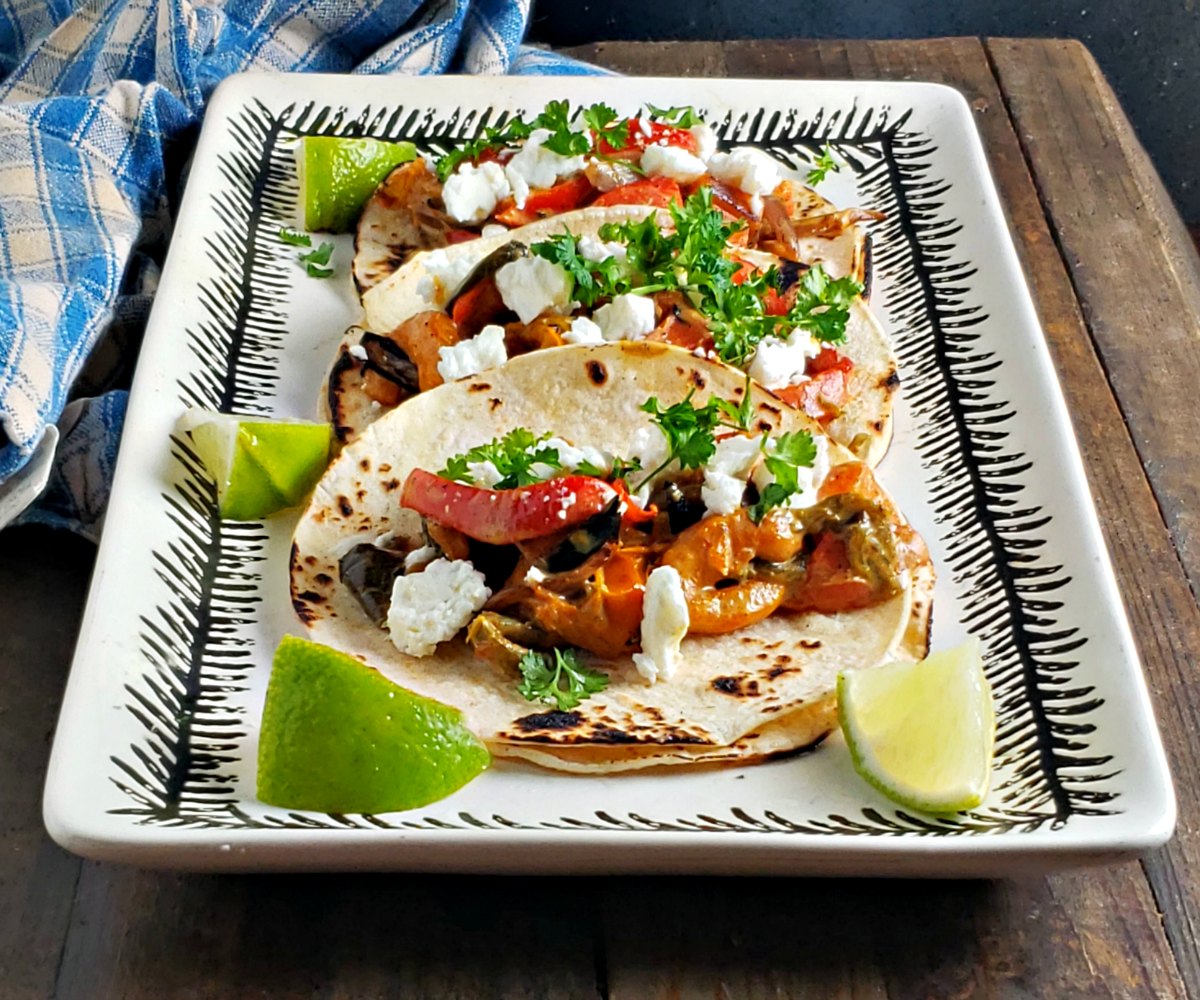 One of my all-time favorite Mexican foods is Rajas. They’re mild Poblano peppers, roasted, cut in strips, and in the case of Rajas con Crema, they’re simmered for a few minutes with a little cream. They’re fabulous and rich and if you can imagine the mild, smoky poblanos simmered in cream, you’ll start to wrap your mind around Rajas. The dish is traditional in Central and Southern Mexico, although I have a few fun twists for this version.

Rajas seem to just ask to be riffed on! Here I’ve used a mix of poblanos and colorful bell peppers and a bit of sweet potato (with just a touch of jalapeno for a little spice) and served them street taco style. Just a little lime, a little cilantro and a touch of Queso Fresco takes them over the top.

Don’t think you have to stop there, though. Rajas can be a filling, a topping, or used as a condiment. Rajas are a fabulous vegetarian or meatless option for a taco, but you’ll often see them in restaurants as a topping for flank steak. They’re beautiful used as a garnish for chicken, pork or beef tacos or bowls or tucked into burritos as a part of the filling.

Rajas can be finished in many ways, too. Whether you make tacos like I did (highly recommended, by the way) or serve them in some other fashion, you’ll want lime. It really plays off the creamy richness. In addition, you can sprinkle with pepitas or pumpkin seeds for a little crunch. (Want to know the difference? Check out this article from Cookful on that pressing issue.) And a little cheese never hurts, but since the mixture is already creamy, I love to use a little Queso fresco (or Feta as a sub) since it stays a little distinct rather than melting in as a shredded cheese does but you do you!

Tradition dictates poblano peppers, but many other additions can be made to this dish: it’s not uncommon to hear of Rajas with corn, squash, or plain old potatoes rather than the sweet potatoes I like to use. Red onion adds pizazz; white is more traditional. And me? I gotta have a jalapeno or two. I sometimes sneak in a little smoked paprika or a touch of chipotle powder to the sweet potatoes as I cook them up for a little oomph, def NOT a traditional variation!

Speaking of variations, Rajas are a great way to use up a few leftovers from the fridge; maybe a smidge of corn or leftover potato…or something more inspiring.

Or you could combine them with something leftover when used as a filling for a burrito. Rice or grains, or just about any protein that needs to be used from meats to beans, chickpeas, and so on. It’s a great time saver to build off what’s already in your fridge (and prevents waste, too, of course!)

Rajas con Crema – I like to get some good color on the onions & sweet potatoes.

Be careful not to over char or over steam your poblanos and peppers; they’re heated a second time in the cream and if they’re too well done they could fall apart. The timing is going to vary depending on your broiler. If you don’t want to use the broiler, you can char on the grill, on the burner of a gas stove, or with a torch, too, although I’d only use a torch as a last result. They are fussy and leave a taste behind from the propane or whatever fuel is used.

When cleaning the peppers, try to get as much of the skin off as possible, but don’t sweat small bits. And don’t rinse them! Rinsing IS easier but you’re rinsing off some of the flavor if you do! Just be patient.

When cooking the onions, do try to get a little char! You can see I’m not using my best skillet!! The potatoes go in (and that’s when I like to sprinkle on a little smoked paprika or chipotle powder, optional) and I keep the heat pretty high, add a little extra oil and again, try to get a little color on them.

Poblanos might look pricey per pound but they aren’t super heavy so the total often isn’t as bad as it might look. They’ll be lower in season and in areas where they’re grown, obviously much cheaper! Where I live in Minnesota, there really aren’t sales but the farmer’s markets sometimes carry them. It does pay to have an idea of the pricing at the store when shopping the markets. Sometimes the prices are fabulous, but sometimes not. The same pretty much applies to jalapenos, though the price at Aldi is outstanding.

As far as bells, there are two types of sales, per pound or per pepper. I usually look for the per pepper pricing; in my area, it’s generally cheaper – I’ll then buy the biggest, most gorgeous ones I can find. The peppers are often bagged and sold by a unit price, too. Again, an Aldi price for a three-pack may be better than any grocery store sale.

When I work with any pepper I like to roast, Bells, Poblanos, Serranos & Jalapenos if the price is great I pick up extra and roast them, then portion into Ziplocs and freeze. It makes future meals so much easier to have a stash and the mess is over.

I’ll sound like a broken record but cream is always less expensive at Aldi than anywhere else. The every day Aldi price beats out the buyer’s club and the best grocery store holiday sales price. Cream literally keeps for weeks (high-fat content) so if you need to shop at your standard supermarket get in the habit of picking it up during holiday sales. If you’d like to see what items might be on sale during any particular holiday, check out my post Win at the Grocers. It has a link to each holiday.

Preheat the broiler. Place the peppers on a baking sheet covered with foil and broil until the skin is blistered and just charred, turning to cook on all sides as needed and removing them as they are finished. Place the charred peppers in a bowl and cover to steam for 10 minutes.

Open peppers, removing stems, seeds, and ribs. Turn the peppers over and flatten them out, peel the blistered skin off the peppers. Slice into 1/4 inch strips, lengthwise.

In the meantime, place the sweet potatoes in a microwave-safe bowl. Add about 1/4 cup water, cover with plastic wrap, and cook for about 5 minutes on high until potatoes are soft but still slightly firm.

Heat oil in a large skillet, add onion and saute until over medium-high heat until softened. Add potatoes and continue to cook until the onions are slightly browned and the potatoes pick up a bit of color. Optional, but add a little smoked paprika or chipotle powder to the potatoes if you wish. Add peppers, oregano, and cream and cook for a moment or two longer until the cream has thickened and coats the rest of the ingredients. Salt and pepper to taste.

Garnish as desired. A little cilantro, some sour cream or crema, and lime are fabulous.

Note: To prepare tortillas, if using flour they can be heated in a towel, a small stack at a time in the microwave for about 1 minute. If using corn, heat over a burner or in a dry skillet until slightly toasted but still soft and wrap in a towel to keep warm. A great time to do that is while the onions and sweet potato are being sauteed..