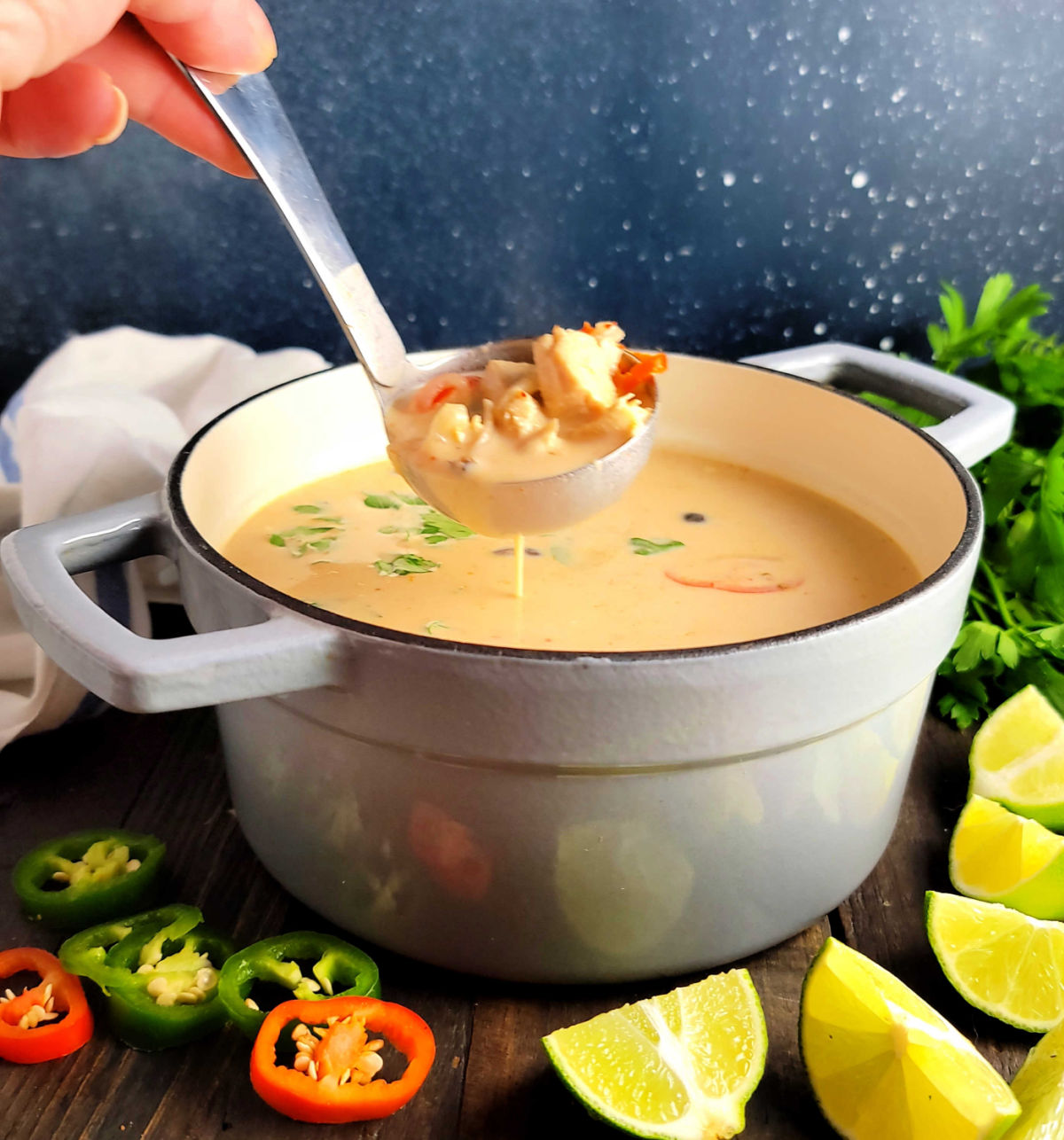 I’ve been kind of holding out on you guys. I started making this wonderful Thai leaning Coconut Curry Chicken Soup a while back and neglected to share it. But maybe that’s a good thing, now that fall is on the horizon!

There’s something about a fun new soup in the fall, and this one has a hint of heat (or more if you’d like) tempered with rich coconut milk. Add in some bright notes, a little sour, a touch of sweet with a balance of salty and you’re on your way to wrapping your tastebuds around the elements of Thai flavor prevalent in this soup.

This is a downright crave-worthy soup that doubles for comfort food. It’s tasty and creamy (but know it doesn’t really taste like coconut if you’re worried about it!) and It’s perfect for any crisp night. Now, I hate to go there but I gotta say, it’s the perfect thing if you’ve got a little cold or something going on. When my daughter was sick last year, she even spread it on FB I was making this for her!

And although this Coconut Curry Chicken Soup has a Thai leaning flavor, I’m making no claims of authenticity. I’m more about figuring out how to get delicious soup from what you might be able to pick up at most grocery stores, depending on where you live. I’ll give you some substitutions, below, to guide you through.

An assortment of curry paste. Thai Kitchen is often at grocery stores. An Asian friend recommends Mae Ploy. No one is paying me, lol

How Spicy is the Soup?

The spiciness is in your control and this soup has two elements of spicy. In my version, the spiciness comes from a spoonful or three of a red Thai curry paste, a few hot peppers in the soup and a floating of some hot chiles towards the end of the cooking; those last are more of a garnish than anything.

As I mentioned above, this soup does not taste like coconut but there is coconut milk in the soup (some people use coconut cream.) The cream is much thicker, so you’ll need less of it than you will the milk.

For the creamiest soup, look for a good coconut milk that has only coconut and water and possibly something added as a preservative. They may be a little pricier than coconut milk thickened with something else, usually guar gum or a modified starch of some sort. Those seem to separate more; you can see the difference in my soup made last year (right below) that has a lot of red floating on the top (cheaper milk) and my newest batch which is far more cohesive (and a little pink!) Either tastes great, though.

Some Thai coconut soups rely on all coconut milk. I like the combo of the coconut milk and broth or stock; it’s so delish and a bit lighter tasting. Here’s my stock recipe (I use this recipe) if you don’t have a favorite. You can use canned or boxed stock, too, just watch the salt content.

What about the other Ingredients?

In an “authentic” Thai version of this soup, you might see particular ingredients unique to Asian cooking that might harder to find here in the States, depending on where you live. Like so many soups around the world, every family and every region (and every restaurant) has variations, which also makes it very forgiving.

There’s no shame in your game if you sub out ingredients to suit what’s available where you live or to your personal tastes. I’ll give you some common substitutions below so you’ll never have to miss out on this delicious soup just in case you can’t find every ingredient.

I do quite a bit of cooking that calls for lemongrass so I started growing my own. (Forgive my shameless bragging, lol!) It’s like a weed and requires little care. Now I sometimes see it at my store, but not always. if you use lemongrass, cut off the grassy leaves and pound the stem to release the flavor. A back of knife does well or a meat mallet would work, too. You’ll need to remove the stalks from the soup after it simmers for a while as it’s inedible.

Lemongrass in my garden box

Lemongrass stalks. Lay them out on your cutting board and really pound them to release the flavor. Discard the long grassy tops.

But back to this soup! I’m just crazy wild about it and love that it’s easy AND so tasty. And while the recipe test should be 4 to 6 servings, my daughter and I pretty much polished it off in an evening. It’s one of those make it, have a little more coz it’s so good, then pull it out and finish it off before bed kind of meals. So fair warning, you might want to make more if you have any kind of self-control issues with food like we do, lol!

You’ll start out using just a bit of the thick fat that accumulates on top of the canned coconut milk. Saute the onions in that, then add in the chili paste (the flavors wake up in the heat) and then just dump in the chicken broth, the galangal or ginger and the lemongrass. Simmer for about 15 minutes then remove the lemongrass stalks and the chunks of galangal or ginger before moving on.

The chicken only needs a few minutes to cook through in the broth and the same with the mushrooms, and I add a sliced jalapeno along with them. Once the chicken is cooked through, lower the heat and add the coconut milk and your finishing flavors, a little sugar, some fish sauce, and lime juice. Taste and adjust those flavorings! You’ll want some zing and when everything is balanced, you’ll know it! Now’s the time to add more curry paste if you want.

Serve with garnishes, because that’s always the fun part of any soup! Lime, cilantro, parsley, or maybe some thinly sliced green onion and more chiles.

You can use either white or dark meat in this recipe; we just prefer breast. Breast is a little pricier, but either way, make sure to buy your chicken at a rock bottom price and freeze until needed.

The Asian ingredients are all common enough to find in a well-stocked grocery store. You’re much more likely to find them cheaper at an Asian market if you have one nearby. In a city, even at the same chain, you may find pricing differs depending on demographics. It’s well worth checking, especially for items like coconut milk. When I shopped for coconut milk, the grocery down the street was selling it for $3.49 a can. The Asian market I stopped at? $1.29 a can, Target had a price of $1.99 a can.

You’re likely to find sales on Asian ingredients at your grocery store, often unadvertised, during the Lunar New Year. If you do find great pricing and will use the items, be sure to stock up.

(Since you won’t use all your chile paste, know it keeps well for weeks in the fridge and can be frozen, just like you might freeze tomato paste. I like to use a small Ziploc.)

In a soup or stockpot, heat the coconut fat over medium heat. Add the onion and cook until softened, but not colored. Add the curry paste and cook for a minute or two, stirring constantly, then add chicken stock, the galangal or ginger, and the lemongrass stalks.

Simmer for about 10 to 15  minutes to infuse the stock with flavor, remove the chunks of ginger and the lemongrass stalks and discard. Add in the chicken, mushrooms, and sliced jalapeno or chile; cook at a low simmer until the chicken is just cooked through, five to six minutes.

Turn down to a bare simmer and add in coconut milk, then sugar, fish sauce, and lime juice. Simmer a minute or two to heat everything through. Taste and adjust flavors, adding a little more of any of the elements to achieve your perfect balance; sugar fo sweet, fish sauce for salty, and lime for sour. If you want more heat, consider stirring in more curry paste.