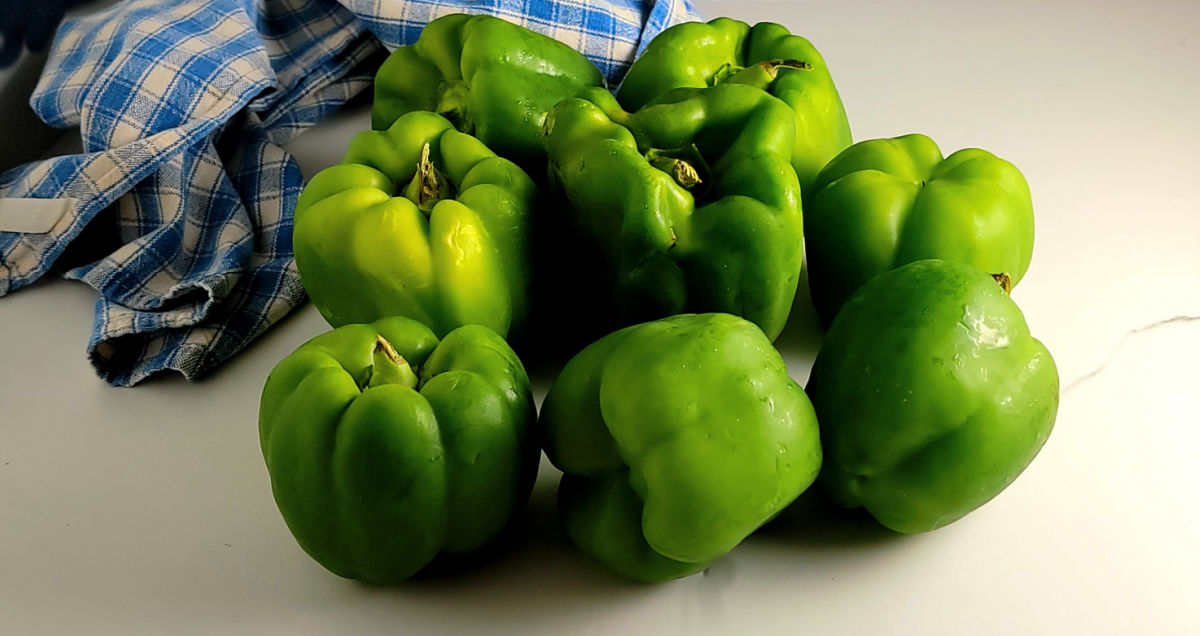 First of all, when deciding what to do with too many green peppers, I guess we need to define how many green peppers are too many! Here, I’m talking about a few, like the windfall of about a dozen green bell peppers (plus a few more the following week) we got in our veggie box.

What To Do With Too Many Green Peppers

And of course, I don’t want to let a single one go to waste! I’m focusing in particular on green bell peppers because I think they’re a little trickier to work with than some of the colored bells, the yellow, orange or red. The same principles apply to those peppers.

Now, of course, I’ve used some fresh, some in recipes (and love them for stuffed bell peppers – but the grandkids and my daughter, Jessi, don’t care for them) but I still have an overabundance! So my other solution is to freeze. And I’ve done that several ways, both on their own and in recipe “kits.”

It’s worth noting that Bell Peppers can be pressure canned, and Bell Pepper Pickles can be canned in a water bath. I’m leaving those projects to the National Center for Home Preservation for now. Bell Peppers can also be roasted and then skinned and frozen but typically you’ll find that method used mostly for the red bell peppers or various hot peppers.

Veggies prepped for fajitas; use fresh as is or freeze.

What To Do With Too Many Green Peppers?  Use Fresh:

What To Do With Too Many Green Peppers? Find Recipes that Use a Lot of Them:

Several recipes come to mind right away that use a good amount of Green Bell Peppers. These days, the colored peppers (yellow, orange, and red) are readily available, but they’re a little sweeter than the green peppers.

While you can usually sub in a green bell pepper for a colored in many recipes, there are some recipes that just shine with Green Bell Peppers. Here are some of the faves on my site:

Bell Peppers, Raw. Freeze as is or Saute and then freeze.

These peppers were sauteed. Simply place in a Ziploc and freeze.

What To Do With Too Many Green Peppers? Freeze Them!

Green Bell Peppers freeze very well and can be frozen in several ways. They are one of the few vegetables that can be frozen “as is” with little preparation or they can be blanched or cooked. Each method has advantages and disadvantages.

No matter what method you use, wash the Green Peppers first, remove the “innards”: the stem, seeds, and any ribs. They should then be diced, sliced into strips or rings, or cut to your specifications.

How to Make Shortcut “Kits” for Recipes:

Making kits to toss into recipes so you can shortcut whatever you wish to make does require a little planning and some time. Take a look at your favorite recipes and figure out how many bell peppers and other veggies you’ll need for each.

Cook as directed in your recipe, cool the mixture, divide if needed, and place into labeled Ziplocs. At our house, we freeze Ziplocs flat, then stand them up in bins, envelope style. To use, simply thaw and continue with the recipe, same as if you had started with the fresh veggies.

Above are the pics for vegetables prepared for the following recipes, and note on the Ziplocs I labeled exactly what was in each and what recipe it was for:

Save veggies in freezer for stock; keep adding.

If you make homemade stock, save the veggie scraps from any onion, celery, carrots. Keep a Ziploc in your freezer and keep adding as you have scraps until full. The bell pepper scraps are not good in stock.

16 thoughts on “Too Many Green Peppers”