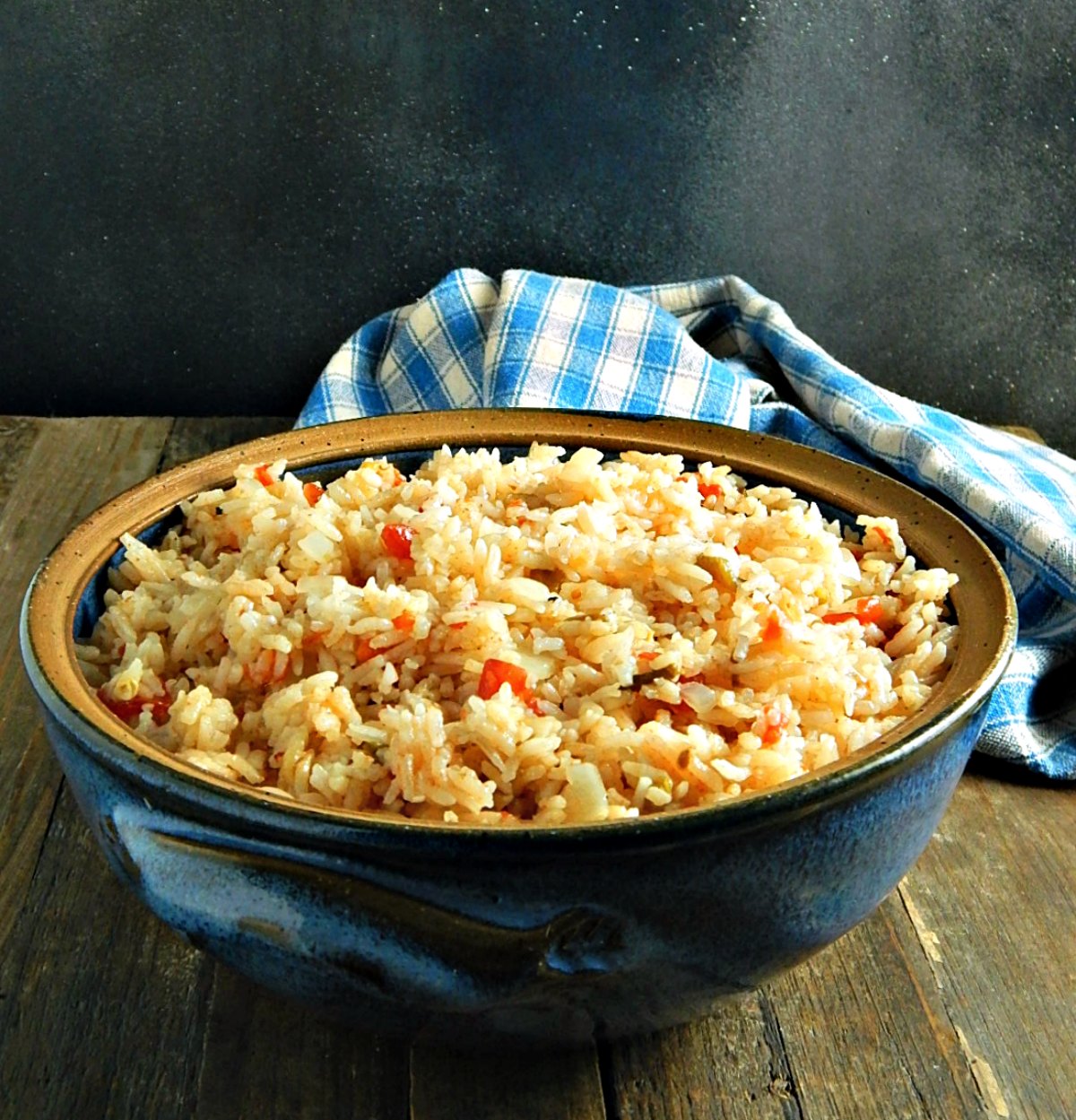 So maybe this is just the week for Mexican basics done in the Instant Pot. The other day it was my Instant Pot Refried Beans, and today it’s Instant Pot Mexican Rice. Which makes me wonder, do people from Mexico call their Mexican Rice “Mexican Rice?” I’m from Iowa and I call my Ham Balls “Iowa Ham Balls” on my site (because that recipe really IS made a lot in Iowa, probably a nod to the German settlers and it has that hallmark Sweet n’ Sour flavor) but if I’m just talking to someone, I just say Ham Balls. Just saying it makes me want to snicker, btw. Here’s the recipe for Iowa Ham Balls with Sweet Sour Glaze, now that I mentioned them.

And now you know why I could never solve the world’s problems. I just think too much about weird things and have a total streak of immaturity at inopportune moments. And I def think too much about food! But I do have one problem solved and that’s how to use the Instant Pot to turn out absolutely delish, light and fluffy Mexican Rice.

And while I’m thinking about things, I guess I should qualify and say not all Mexican Rice is red. It comes in all the colors of the flag, I heard once. This recipe is for red rice and has an American twist. I have a more traditional Mexican Red Rice using a standard cooking method if you don’t have an Instant Pot, btw. And I have green rice, too, on my site that’s perfect this time of year when all the different peppers that are coming into the stores and farmer’s markets, Arroz Verde, Mexican Green Rice. And of course, I have Cilantro Lime Rice, in the Instant Pot or Not. I don’t know many bloggers that don’t have a recipe for that – and that might not even be Mexican at all. Who knows? That’s rhetorical.

But back to this Instant Pot Mexican Rice. The little twist that takes this out of the realm of traditional is a can of Rotel. There’s something magical about Rotel. I don’t know what they put in it, but it’s sooo good in this rice, which as you can see is on the lighter side of the color spectrum. But it’s not light on flavor.

It’s just a bit more subtle, a little cleaner tasting and less tomato-ey than some. That’s because I wanted to serve it especially with a meal I’ve been working on, which is a Colorado Green Chili recipe for the Instant Pot, and I didn’t want the flavor of the rice to compete.

But speaking of green, I had the weirdest thing happen the other night. I walked around my bed and in the dim light, I saw a strange, dark lump on the floor. My mind immediately seized on “frog.” It was far too small to have me think “dog” if you know what I mean. We’ve had a lot of frogs and toads outside; it’s been wet this year. I told myself “no way” as I poked at it and jumped back immediately.

Turns out it was just a piece of plastic Chance, my deplorable labradorable chewed up. It was actually one of the little black plastic cups I used in my post on 50 Easy Prep Ahead After School Snacks. Bad dog! And bad dog mom for leaving it within reach!

As I rounded the bed thinking how crazy I was that I even momentarily entertained the idea it could have been a frog, that there was no way a frog could be in my second-story bedroom, that’s when I saw something jump up my closet door! In the most bizarre turn of events, it was a tiny tree frog! No bigger than my thumbnail and covered in dog/cat hair/carpet fibers! How it got in my bedroom, how it survived both Homer (the cat) and Chance will always be a mystery.

I had to cut some of the tangled hair off, which wasn’t easy, nor was that little sucker cooperative! My hands were shaking as I did so, he/she was so tiny and one wrong move and a limb could be lost. Then I used a tiny bit of wet sponge to clean him? her? Luckily, once wet, the rest of the hair just slid right off. I rinsed the sponge off, wet it again and put it in with the tiny frog, & placed him/her in a dark, quiet place. When I checked later, it looked quite recovered, so out it went, into the night. Godspeed, tiny frog!

This is how tiny the piece of sponge was!

It was really dim! And it DID look like a toad or frog, honest!

But back to the food! And I hope I didn’t gross you out by showing a pics of a frog on the same page as my Instant Pot Mexican Rice! First of all, Mexican rice is pretty simple to make and turns out just beautifully! It is imperative the recipe be followed closely for best results, both the instructions and the measurements.

The real key to light, fluffy rice rather than heavy, sticky, starchy rice in the Instant Pot is to rinse and rinse the rice! I give you the method, below, in the recipe. The next is to saute that rice for a few minutes. Just like when you make a pilaf, it helps to firm up the rice so it won’t turn to mush.

Then make certain that you leave no residue from sauteeing the veggies and the rice on the bottom of the pan – that way you won’t get the dreaded “burn” notice. Make sure, though, that you don’t stir the rice too much in your quest to leave the bottom of the pan clean. Excessive stirring will almost always result in sticky rice, not gorgeous, fluffy, rice.

Mess with the seasonings if you wish. Add in extras like tiny bits of carrot sauteed with the onion or peas sprinkled over the top at the end, before you seal the pot. Leave out the drained tomatoes if you’d like. Whatever you do, don’t mess with the ratio of rice to liquid (which includes liquid picked up by the rice in rinsing, the blended canned tomatoes and juice along with the broth/water). Follow the simple formula and you’ll be turning out perfect Mexican Rice in the Instant Pot every time.

This recipe is really inexpensive to make. Buy your rice in larger bags; it keeps practically forever and is almost always cheaper that way. If your store has rice in several areas (in the man grocery aisles, usually near the boxed dinners, in an “ethnic” aisle or in the Asian and/or Mexican aisles, compare prices.

Rotel (or a store brand if it’s available) is usually a little higher in price than plain old canned tomatoes, but not nearly as high as buying a can of tomatoes and a can of green peppers! Watch for Rotel on sale (often it isn’t advertised) and often it’s on sale around Cinco de Mayo. If you use it, stock up!

The key to light, fluffy rice is to rinse thoroughly and watch the measurements closely.

Measure out one cup of the tomatoes and juice. Add to a blender and puree. Drain the remaining tomatoes and set aside both the pureed and drained tomatoes.

Add oil to Instant Pot and set to Saute setting. When hot and oil is shimmering, add the onion and cook, stirring, until it starts to look translucent. Add the garlic and sit for a minute or two more until it smells fragrant. Add the well rinsed and drained rice and stir around until some of the rice begins to look a little white around the edges, three to four minutes. Turn off pot and immediately add the salt, chicken stock or water or combination. Add the blended and the reserved tomatoes and stir minimally, but do make sure there is no coloring on the bottom of the pan, which could cause a “burn” notice. Add peppers if using.

Seal Instant Pot and set for High Pressure, 4 minutes. Allow to release for 12 minutes, then turn Instant Pot off. Fluff with a large fork. If any rice seems less than tender, cover for a few more minutes.

Rinse rice well. The easiest way is to place rice in a metal strainer and place the strainer in a mixing bowl or pot just a bit larger than the strainer. Run tepipd water over stirring the rice around with your fingers as the bowl fills up. Empty bowl and repeat five more times for a total of six times, or until water in bowl is clear.

I’ll be sharing Instant Pot Mexican Rice at Fiesta Friday #290 this week. I’m “hosting” this week, along with Angie of Fiesta Friday, so be sure to stop by and check out all the posts from all the bloggers! I’m seeing great things so far!