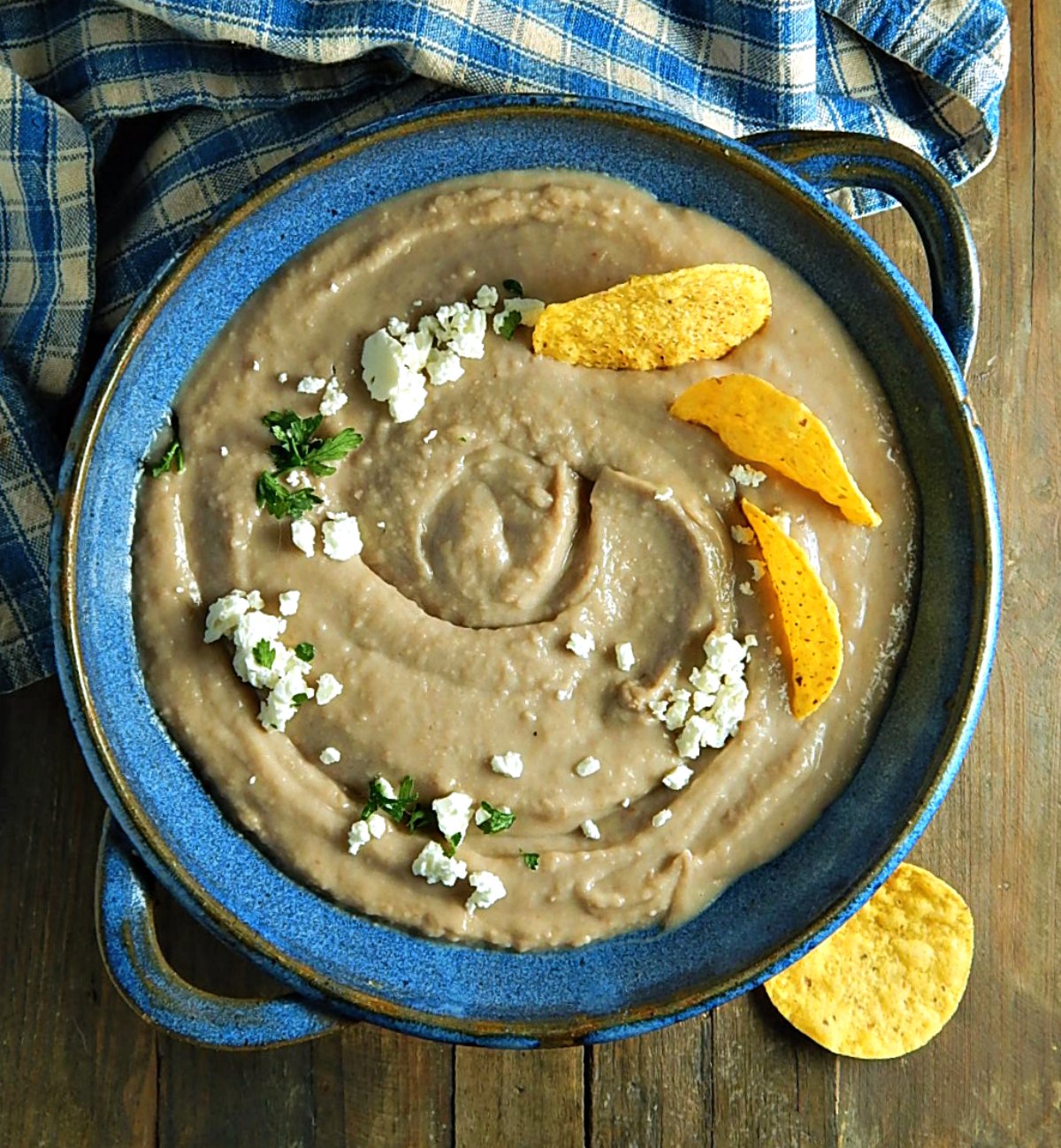 One of my favorite things to make in my Instant Pot has to be beans and bean-based dishes, and Instant Pot Refried Beans are absolutely no exception. They turn out beautifully and they’re drop-dead simple. Toss your beans in the pot with an onion, an herb or two, a little spice if you like, and go & do whatever it is you’re doing. There’s no babysitting and there are no worries about precise timing or being johnny on the spot at the end of the cooking period.

Once your beans are done, the keep-warm function on the Instant Pot will take over and they’ll just sit there, all warm and soft, waiting to be turned into lovely frijoles refritos whenever you’re ready. Easy peasy!

Instant Pot Refried Beans are lovely, with no effort at all. Back in the day, I used to soak the beans (I still do, but more on that later) then cook the beans for who knows how long on the stove, might be an hour, but it might be several, simmering, stirring, tending, checking. And then, just as I was taught by a friend from Mexico, I’d transfer the beans (at that point, they’re referred to as “pot beans” or Frijoles de la Olla) to another pan with a little lard or another type of fat (sometimes bacon drippings) that I had sauteed a diced onion in and mash the beans, adding back in the cooking liquid as needed. They were/are wonderful.

But so much easier is making the Instant Pot Refried Beans. Add everything to the pot, push the button and walk away. When finished, drain off some of the liquid (Save it;  you might need to add more back in) then mash right in the pot with traditional bean masher (a machacadora), or a potato masher, the kind with the little round holes in it, an immersion blender or a mixer. You can also add them to a blender (that makes the smoothest beans) or your food processor if you want. As you mash or blend, add more liquid until the beans at your perfect texture. Thick and chunky, smooth or creamy – make them however you like them.

The best part of Instant Pot Refried Beans (besides how easy they are) is that they have tons of flavor (you don’t need a lot of water to cook them) and you can flavor them any way you want! Make them traditional with a little onion, epazote & a touch of your preferred fat (it adds flavor, richness and keeps the pot from sputtering so much). They’re my fave just like that. Or add in a little spice (like my Homemade Mexican Pinto Bean Spice) or some green chile or chipotle or whatever is your fave flavoring. Once the beans are cooked, hit the saute function, taste, and adjust your seasonings. Simmering will take away the raw flavor of any spices you might want to add at that point.

If you’re a fan of Rosarita Refried Beans in a can try a little of my Pinto Bean Spice and a tablespoon or two of vinegar. then drain and mash by your chosen method. If you really like creamy refried beans, after they’re finished and mashed, try a little sour cream or crema.

I thought I’d take a break and show you a few flower pics. Years ago, towards the back of my garden, I planted white phlox to fill in and brighten up the bare area around my ancient lilac. When my garden was mostly destroyed this last year by marauding rabbits and squirrels, I encouraged the phlox to fill in and take up some of the space. I’m still missing my flowers (just last week the squirrels tore up a Siberian Iris I transplanted into a new space, my new clematis I planted (to replace the old 20-year-old one the squirrels tore out) a coneflower, a sunflower, and a lipstick plant all given to me by a neighbor, along with a few bites of my tomatoes) but I’m enjoying the phlox in all the different variations.

That’s a little like saying you’re enjoying the junkers you’ve replaced your fleet of collector cars with, but I’m trying to remain positive!! These all started from a few white phlox the OG Phlox as I call them. They’re a rather wild tangle. Phlox is an inexpensive way to fill up space, comes back and reproduces easily and the butterflies and hummingbirds seem to like it.

And back to the Instant Pot Refried Beans! I pretty much already took you through the process already. There’s one thing that I absolutely do, whether cooking beans on the stove or in the Instant Pot. I brine my beans. That means I presoak them, and in the case of brining, I do that with added salt. It makes such a difference in the taste and how quickly & evenly the beans cook, and there are a lot of advantages to either soaking or brining. I have a post all about Brining Beans to look over if you want.

Many people cook their beans or bean dishes in the Instant Pot without soaking. I’ve tried many times and never had great results. Beans do not cook evenly in the Instant Pot if they aren’t soaked: When the majority of beans are done, some are too firm and/or crunchy. Cook them longer until they’re all soft and some will have disintegrated. I don’t know what to say to those who say you don’t need to soak. I’m flabbergasted – either I’m too picky or they aren’t picky enough – or both. I highly encourage you to pre-soak, and especially to brine. Life is too short for mediocre beans.

I also mentioned an herb called Epazote. If you love refried beans and have found yours seem to lack the subtle flavor of refried beans you’ve had while out or maybe at someone else’s house, it might be that you’re lacking that flavor that comes from Epazote. It’s also said to be carminative (helps with digestion. The soaking helps with that, too.) I grew my own last year, and it was only after doing so that I recognized it as a weed I’d come across before! And this spring, there was epazote springing forth throughout my yard! Too bad all those rabbits and squirrels didn’t eat that instead of all my flowers! Refried beans are perfectly fine w/o epazote, but if you have access to a Mexican market, give it a try.

Instant Pot Refried Beans = not too pretty but darned tasty!

Let’s face it – canned beans are not a huge budget breaker, but homemade Pintos beat them out in flavor and price! I love to buy my Pintos at Aldi and I believe that the last time I took notice of the price there it was for a three-pound package for $2.49. If you’re curious, that makes the beans about 83 cents a pound. A pound of pintos is usually about 5 1/2 to 6 cups cooked, and just a little less if mashed into refried beans. The cost of my refried beans (not counting spices, etc.) counting on 6 cups is about 15 cents a cup. Since a can of refried pinto beans is usually about 1 1/2 cups worth, the price of the dried beans at 1 1/2 cups for comparison is about 23 cents.

I honestly don’t know what the price of a can of refried beans is, probably around a buck these days? So there are some savings. Unless you eat a LOT of beans it’s not probably not going to affect your budget that much (but dried is def the way to go if serving a crowd!) but the difference in quality between homemade and canned is reason enough to pull out the Instant Pot!

Anytime I make pinto beans or refried beans, even if it’s just for myself, I make a pound and freeze any extra in 1 1/2 cup portions. They reheat beautifully, although a little liquid may need to be added. Then they’re at the ready to use for a burrito or a side dish.

The best Homemade Refried Beans, customized to your taste!

Add all ingredients to Instant Pot. Seal and set to High Pressure, 20 minutes. Allow to go to Keep Warm Function for 10 minutes then release pressure in small spurts, stopping and letting the pot sit for 30 seconds if anything other than pure steam comes out. (If timing isn’t an issue, the pressure may be released naturally for longer or until the pot is completely depressurized.)

Remove sprigs of Epazote and discard. Remove onion and slice off the hard stem end, then return to the pot. If desired, bring to a simmer, taste and adjust seasonings.

Drain the liquid from the beans, reserving it. Mash in pot as desired, adding liquid as needed, until desired texture and thickness is reached. Do not discard the remainder of the cooking liquid yet, as beans will thicken as they sit and may need additional thinning.

Alternatively, remove the beans from the pot to a blender or food processor and pulse, adding liquid as needed to achieve desired texture.

I’ll be sharing Instant Pot Refried Beans at Fiesta Friday #290 this week. I’m “hosting” this week, along with Angie of Fiesta Friday, so be sure to stop by and check out all the posts from all the bloggers! I’m seeing great things so far!