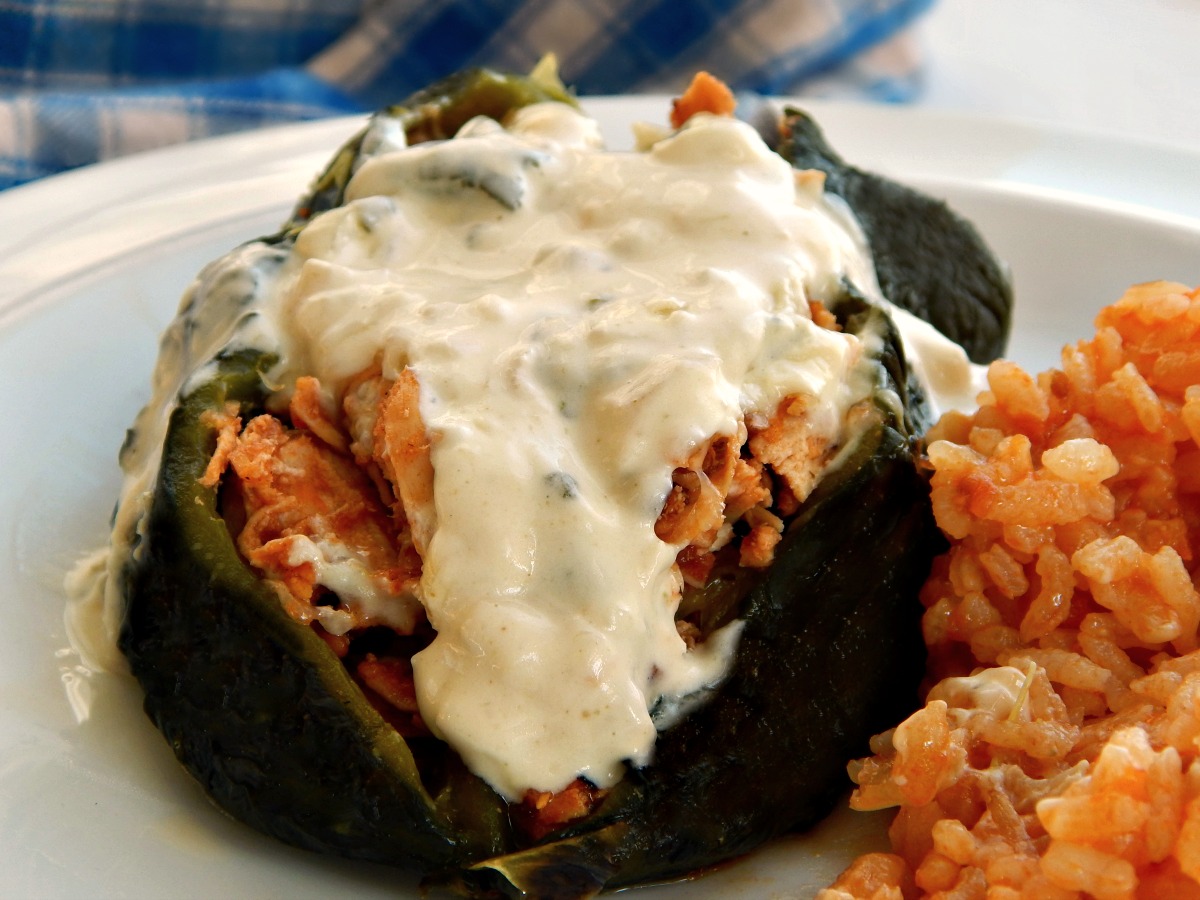 With Cinco de Mayo fast approaching I can’t help but think of Mexican cuisine. One of my favorite Mexican meals is a Chili Relleno, but today I wanted to go with somethig fresher.  And so my Chipotle Chicken Stuffed Poblanos with Rajas Sauce were born.

You can’t get much better than a roasted Poblano; they’re mild by nature but have a wonderful flavor. Add in this Chipotle spiked Chicken filling (I used three for just a little heat, a slight zing; feel free to taste and add more if you’d like) and top it all off with a creamy, cheesy sauce (Rajas sauce) that has a little more Poblano and you have an outstanding dish!

I’d call this restaurant quality dish for sure. It’s not only fantastic, it’s a bit unusual and very impressive on the plate.

While there’s no denying that roasting the peppers, peeling them and stuffing them is a bit of a pain, I think you’ll love this so much you’ll forget all that. My Dad, in particular, who like me, is a huge lover of Mexican food, couldn’t stop commenting on it…it will be interesting to see if the one pepper, leftover, is still in the fridge tomorrow!!

There’s enough sauce and filling for six generously stuffed peppers, but today I just stuffed four, giving me enough leftover Chipotle Chicken filling and Rajas sauce for tostadas or soft tacos for lunch later in the week. It’s just a little cheat to make it easier on myself. These are perfect with a side of Mexican rice and perhaps beans or refried beans of your choice.

Under the broiler on a foil lined pan, roast poblano peppers, onion, garlic and fresh tomatoes (if using fresh) until skins on the peppers are bubbly and charred in places, onion skin is charred and garlic is softened. The fresh tomatoes, if using, should be slightly browned and softened. Turn often, as necessary, and remove each piece to a bowl covered with a kitchen towel as it is finished. Allow to steam for several minutes in the bowl.

Remove the skins from the peppers, and when cool, cut a slit from the stem end to the bottom and remove seeds. Set the six best aside and use the other in the rajas sauce, below.

Remove the skins from the onion, squeeze or open garlic to remove pulp, and deseed tomatoes if using fresh.

Place tomatoes (fresh or canned) in the food processor along with garlic, onion and chipotle peppers. If there are juices on the broiler pan or in the bowl the vegetables were steamed in, add them as well. Pulse until nearly smooth.

In the meantime, cook chicken breasts in simmering water until done. Remove, reserving about 1/2 cup of the liquid, and shred the chicken. Discard or reserve the rest of the broth for another use.

Place chicken back in pan with the pureed tomato mixture. Add 1 teaspoon salt, 3/4 teaspoon cumin, and a few grinds of pepper along with the reserved 1/2 cup chicken broth. Cook gently, stirring now and then, until the chicken is nearly dry. Add the teaspoon vinegar. Taste for seasoning.

Keep warm while making the Rajas Sauce, below, then gently heat the peppers in the microwave for a minute until hot, stuff with the warm filling and top with Rajas Sauce. Serve immediately with lime to squeeze over the stuffed peppers at the table.

Add chiles and cream and bring to a simmer. Simmer several minutes, stirring often, until the cream is slightly reduced, the onions and peppers softened.

Remove from heat and add in cheese. Stir well. If the mixture becomes too thick (it should be a sauce like consistency and will thicken a bit upon standing or as it cools) it may be thinned with water or additional cream, a tablespoon at a time. Taste and adjust seasoning.

This is a special week for me: I’m still cohosting Throwback Thursday with Quinn, Carlee, Meaghan & Alli (click on the link) of course, but I’m also a cohost on Angie’s Fiesta Friday! Scarlett from the Unwed Housewife is my cohost, so stop by and check out her blog, too. 🙂