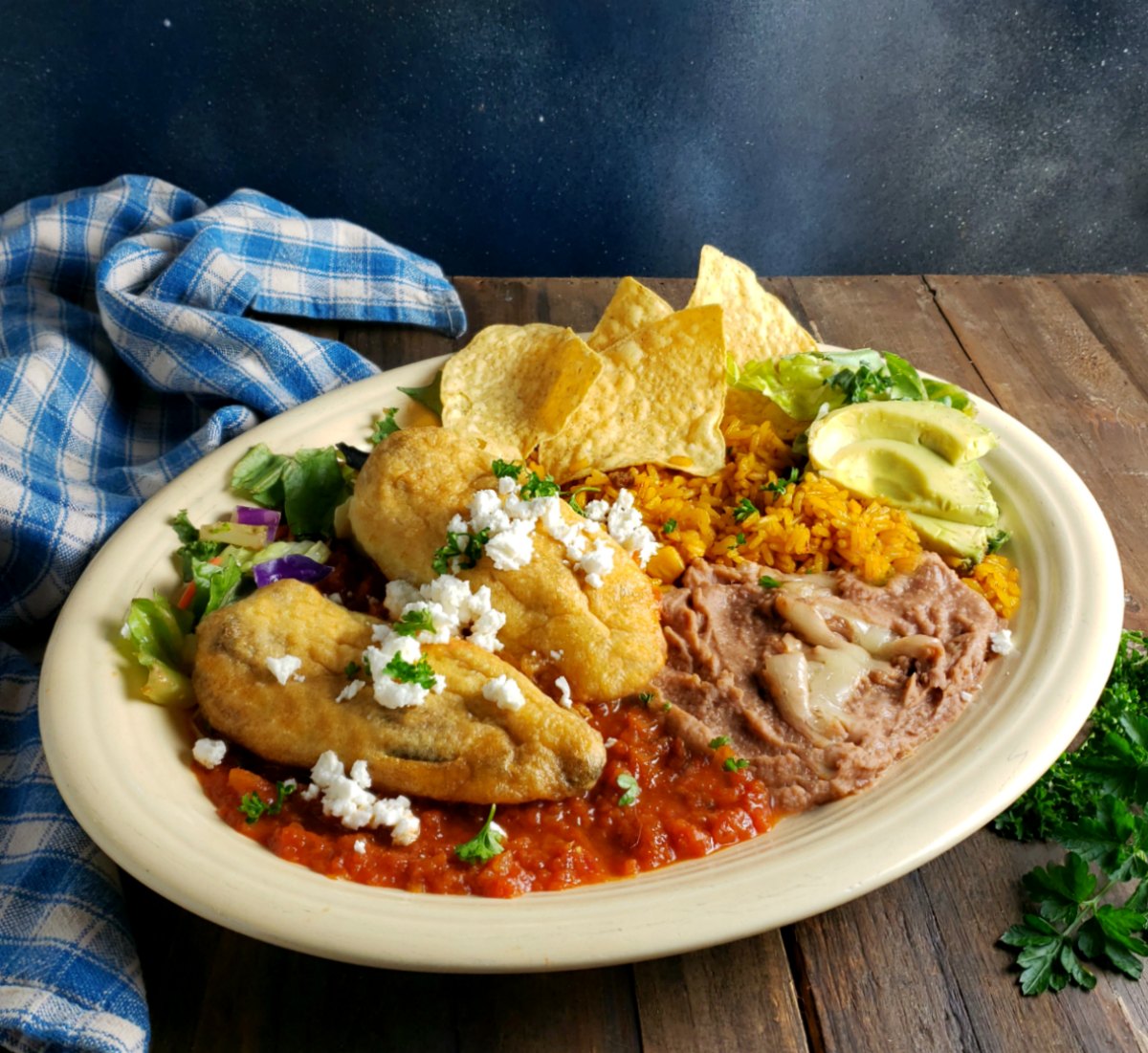 After moving away from the Southwest, I had to find a way to get my fix. Sweet, sour, salty, spicy is always a combination to fire the taste buds and get the cravings going, and that’s just the sauce! Add in that gorgeous smoky Poblano stuffed with melty cheese in that light airy batter and we’re talking heaven. And of course, anything fried is going to send me over the moon, although it has to be a pretty special recipe for me to deep fry anything.

So obviously there’s a bit of work in making my Old Fashioned Chile Rellenos Recipe – so why attempt a meal that even restaurants in the Southwest knock off with strange, contrived shortcuts? I’m talking egg roll wrappers and casseroles rather than the traditional egg white batter?

In the pics here you can see that I like my Rancheros Sauce just a little chunky, but if you’d like, you can blend it so it’s perfectly smooth. I’ve had it served both ways at different restaurants. On the side, I’ve served my Rellenos with my Doctored up Canned Refried Beans, Restaurant Style and my Restaurant Style Mexican Rice, a little avocado, a few chips, lettuce and a sprinkle of cheese.

There are ways to kind of “organize” your cooking for the Old Fashioned Chile Rellenos Recipe that’s going to make it all a bit more doable. For one, the Rancheros Sauce can be made ahead, and the Poblanos, themselves, can be stuffed (and hold together better later when they’re dipped and fried) ahead. Do yourself a favor and do both ahead, then its short work to throw together the batter, put on some rice to simmer and heat up some refried beans for dinner.

When you char you peppers, be careful not to over char your peppers or they will be overcooked and easily fall apart. The timing is going to vary depending on your broiler and the size of the peppers, so watch carefully and turn as needed. Don’t leave the roasted poblanos too long covered, as they will still continue to cook as they steam and you’ll have the same problem. You can char poblanos in the oven on the grill, or on the burner of a gas stove. I find it easiest to use the oven. Line them up, just touching, down the center of a sheet tray and broil them, turning as needed; they’ll support each other so it’s easy to char all sides.

Once they’re charred, toss them in a bowl, cover with a plate and let them sit just until they’re cool enough to easily handle. It’s a messy business removing that charred skin. Be patient, be gentle and don’t worry about every little speck. If a bit won’t come off, leave it rather than damage the pepper. Don’t peel under water or rinse your peppers; you’ll be washing off the flavor. Any juices the peppers leave behind in the bowl can be tossed into the sauce.

When you open the chiles, make a small slit from the stem end to about 3/4’s of the way down the pepper and remove the majority of the seeds. A small spoon helps. Just be patient and don’t worry about being perfect. They’ll stick to everything. It helps to have a clean, damp dishcloth to wipe your fingers on.

When you fry, hold the stem end and slowly place in the oil so the batter has a chance to firm before you let go. Take a large spoon and toss the oil several times over each of the peppers, which firms the top up, so they’ll be ready to turn.

Serve the Rellenos with budget sides like Mexican Rice, Refried Beans and maybe a few homemade chips (you’ll have the oil already hot) helps to keep the cost of the meal under control. My meal of Chile Rellenos for four ran around $8.00, less than my son spends on one trip to Taco Bell! If you have leftover Rancheros sauce, make classic Huevos Rancheros or use over scrambled eggs or an omelet!

Now when you’re at the store and look at the per pound pricing of the Poblanos, don’t be afraid! Yes, it’s high (unless you live in an area where they are grown and can get them in season) but they really don’t weigh that much, which keeps the total output at a minimum.

Always buy your cheese on sale; it lasts quite a while in the fridge, unopened, weeks, really and if you’re afraid it will go bad, chuck it in the freezer. You won’t be able to eat it out of hand because it gets crumbly, but it’s fine for recipes like this.

Never discount how much money can be saved on the everyday pantry items you use often, like the tomatoes and chicken broth (even better, make your own broth) by buying them at a low and stocking up; we tend to discount the bit of savings here and there, but multiply that bit of savings and it will probably add up to more savings than the more expensive items you buy less often & shop carefully for. Any stocks and broths, btw, should be stocked up on over the winter holidays like Thanksgiving and Christmas.

Preheat the broiler. Place the peppers lined up and just touching on a baking sheet covered with foil and broil until the skin is blistered and just charred, turning to cook on all sides, 1 to 2 minutes per side. Place the charred peppers in a bowl and cover with a plate until cool enough to handle. Remove the skin and set aside to thoroughly cool.

Cut the cheese into rectangles roughly the size of your thumb, being aware of the size of the peppers; make sure they’re not too large to fit inside each.

Slice about two-thirds the length of the pepper, just long enough to remove the seeds with a small spoon. Be patient. Stuff the peppers with the cheese and close the pepper back up. Use a little of the egg batter on one edge of the pepper to help it stick to the other side. If needed, thread in a toothpick. to help them hold together.

Heat 1 1/2 inches of oil in a large saucepan over medium-high heat. Gently roll the peppers in the flour. (If the cheese and peppers are too warm and are falling apart, place in the freezer for 10 minutes). Coat the peppers in the egg batter by dunking and spooning the batter all around. Lift the pepper, and gently spoon off any excess batter hanging from the bottom. Make sure the seam is well coated with batter.  If the batter comes off, just spoon on a little more.  It will likely be clumpy, but that’s ok.

Gently place in the hot oil and fry until golden, about 3 minutes per side. Best results will be had by placing them in, one at a time, seam side down; the seam will seal before the cheese begins to get oozy. Generally, using tongs and holding them in the oil until the batter firms up a bit before gently dropping them helps them to hold together. Before turning, spoon hot oil over the topside of the peppers, repeatedly, just to firm the egg batter a bit before turning.

Place on paper towels to absorb the excess oil. If you need to hold them for a bit, place on a rack in a warm 200 degree F. oven.  Serve with the Ranchero (Tomato) Sauce.

Add the olive oil to a medium saute pan over medium heat. Then add the onions and cook until softened, about fve to six minutes. Add the cumin, cayenne, and garlic, and cook until fragrant, 1 minute longer. Add the chicken stock, sugar and the tomatoes with their juice and bring to a boil and simmer about 10 minutes to a sauce-like consistency. Remove from the heat and add vinegar. Salt and pepper to taste. The sauce may be blended to completely smooth if desired and reheated gently.