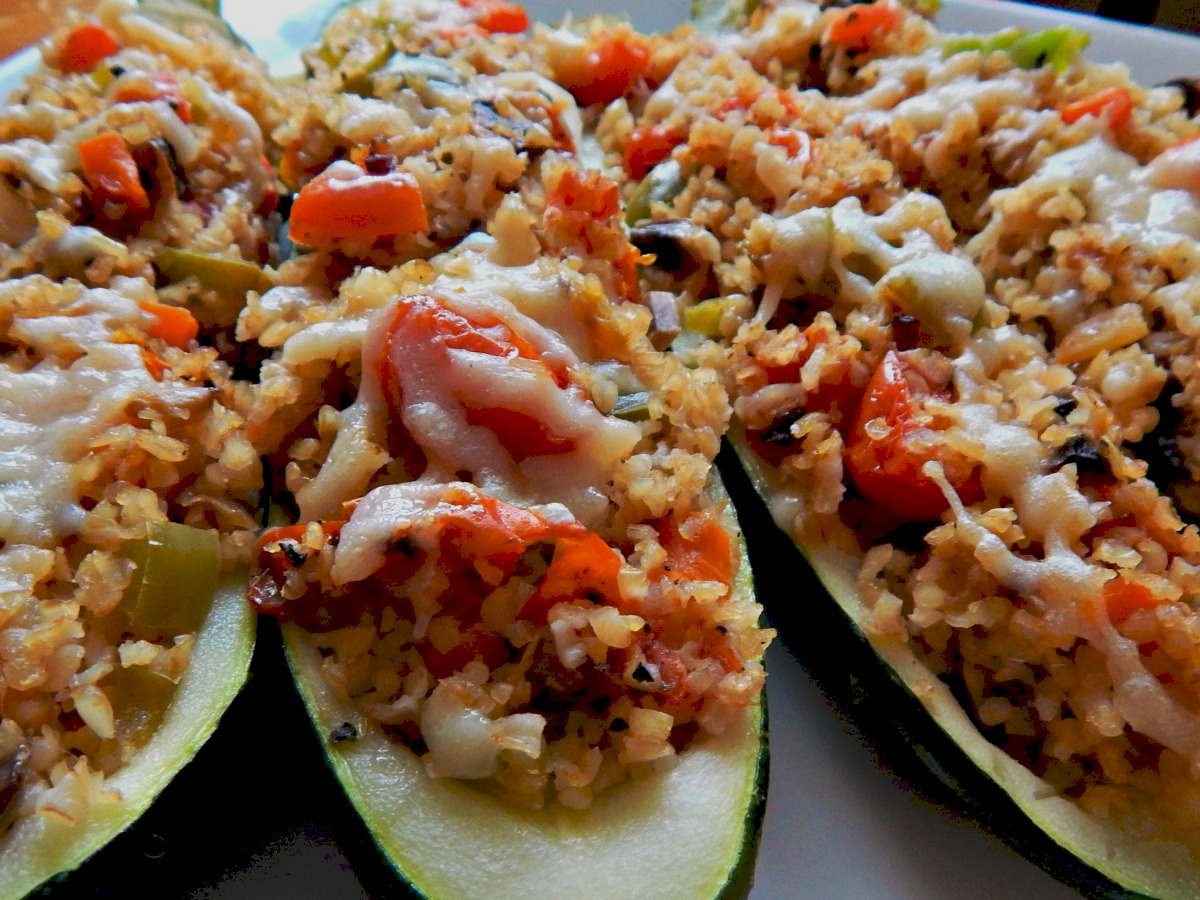 Ya’ll know I love the idea of eating locally and seasonally, but I do live in Minnesota, you betcha, and I’d be eating nothing but turnips and rutabagas all winter long if I did that. Not that I don’t like Rutabagas, especially. But sometimes ya just gotta have something meatless, fresh and fun. So when I need a meatless option I often think of these Stuffed Vegetables with Bulgar.

This recipe for Stuffed Vegetables with Bulgar is going to stretch your dollar and help fill out the veggies to make a meal, all while making even the most lackluster of winter vegetables shine. And of course, it can only get better during the summer months when the bounty comes in.

About Stuffed Vegetables with Bulgar:

By the way, these are not your Mother’s stuffed vegetables (at least not if you’re as old as me!) These are slightly cannibalistic veggies…vegetables stuffed with vegetables. Usually, the vegetables I stuff are either zucchini, summer squash or tomatoes. The Bulgar wheat filling, flavored with broth, aromatics and mushrooms complements the veggies and makes for a slightly chewy, nutty taste, and that nuttiness is echoed by the shavings of Parmesan sprinkled on top.

If you haven’t used Bulgar Wheat before, it’s common in Middle East & Meditteranean countries; it’s a “cereal” made from cracked parboiled wheat groats (it’s just starting to sound better and better, isn’t it, lol!) so it’s considered to be a whole grain. It doesn’t even technically need cooking but it is usually soaked. The World’s Healthiest Foods has a lot to say about the Health Benefits of Bulgar Wheat, even in today’s carb-conscious world.

To complete the meal, I love a little garlic bread or toast, and I like to make our Family’s Parmesan Toast – it’s great on Italian bread but absolutely fantastic with any old leftover hoagie, hot dog, hamburger buns, etc. I just think the garlicky Parmesan component goes so well with the stuffed veggies. These Parmesan Crostini are great, too, with Stuffed Vegetables with Bulgar.

First of all, for a totally vegetarian meal, use vegetable stock or water instead of chicken stock, although stock of some kind is preferred; bulgar can always use a little help in the flavor department.

While buying seasonally and locally is often how we get the freshest food at the best cost; in winter the veggies can be few and far between, pricey and not at their best. Your best bet is to look for fresh vegetables on sale. Sale priced items are often shipped in large quantities, they tend to travel quickly and arrive in the best shape.

Bulgar is likely not popular enough in most areas to go on sale. Check in the bulk, health food and cereal aisles and compare prices. If you have a health food store nearby with great prices, it’s worth a peek.

When ready to cook, preheat the oven to 350 degrees F.

Place the bulgur in a heatproof bowl. In a saucepan or microwave, bring the broth/water up to a boil, then pour over the bulgar. Let the bulgar sit for about 20 minutes to absorb the liquid. Drain off any excess liquid – save the liquid to add to the bottom of the baking dish.

To prepare vegetables for stuffing:

In a large saute pan, heat the oil over medium heat. Add the carrot and chopped onion and sweat about five minutes. Add the chopped mushrooms, and the reserved zucchini or squash if using, reserved bell pepper bits if using and either diced tomato or if stuffing tomatoes, the reserved diced tomato portions, along with the garlic to the pan. Season the vegetables with salt and pepper. Cook until the vegetables are nearly tender, about five minutes; they’ll cook more inside the stuffed vegetables.

If the vegetables start to stick or dry out too much, add a bit of water to the pan. Add the bulgar to the sautéed vegetables. Stir in the chopped tarragon or oregano. Taste for salt and pepper at this point and add if necessary.

Stuff the vegetables with the bulgur mixture, mounding well. Place all vegetables in a shallow baking dish.

Add about 1/2 an inch or so of liquid (saved from draining the Bulgar) supplemented with water or broth ) to the bottom of the dish. Cover tightly and bake until the vegetables are tender but still intact, 35 to 45 minutes or so, depending on how crisp/tender you wish your vegetables to be. (If baking tomatoes, they’ll take less time; check after 25 minutes or so.)