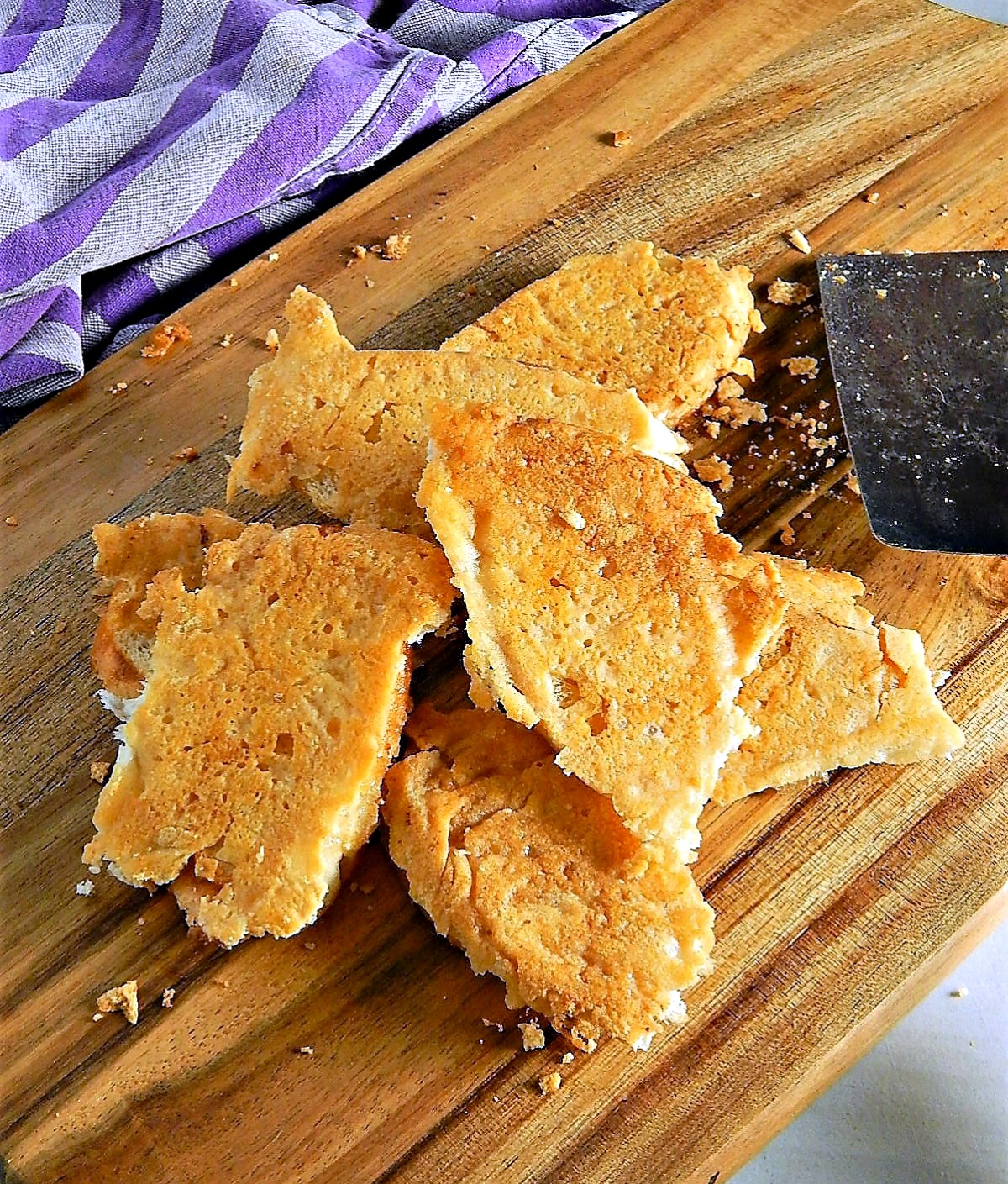 I gotta tell you, I did get sidetracked with posting my Chocolate Meringue Brownie Cake in the meantime, but who could blame, me, lol!! That dessert is an absolute showstopper (and easy, too) and I got so excited about it I had to post it right away. But anyhoo, here are the Parmesan Crusted Crostini, and they’re a showstopper, too, in their own way.

Our family has always made our “Garlic Bread” a bit different than most. We take bread, slather one side with garlic butter, sprinkle with cheese (preferably from the can, lol) and broil it. It’s divine. And it’s actually better with the canned cheese, believe it or not. It’s like a strange little miracle, that!

Parmesan Crusted Crostini, though, is going to make me change my ways. Basically, it’s a Parmesan Frico made in a skillet. The little crostini is pushed down into the hot, melty, golden brown and delish cheese. Then the whole thing is turned upside down and released from the pan.

What you’re left with is toasted bread with a toasted, cheesy, crunchy delicious topping. The cheesy, nutty flavor is going to be great with all kinds of food. Yes to Tomato Soup, but yes to salads and Italian foods. And maybe yes, if you’re like me, and have any leftover, for breakfast. But you probably won’t have any leftover and you might just want to double the recipe because you people will go NUTS over these!

These crunchy little cheesy toasts are super easy to make. If you want your bread toasted on both sides, start out with a bit of butter in your pan, toast the bread and remove it. Honestly, if you don’t mind your bread soft on one side, you can skip that step. The recipe works just fine either way.

Then coat your skillet with butter, sprinkle with grated (a large grate is best) Parmesan cheese (or another hard grated cheese if you’d rather) and let it heat. As it starts to brown a bit around the edges, push the toasted bread, toasty side up, right into the melty cheese.

You’ll kind of peek between the toasts and around the edges and when that cheese looks just the right color, take it off the heat, loosen up the cheese from the skillet and dump the whole works out of the pan, cheese side up. Then break/cut it all apart. It’s a bit messy, but bonus for the cook, who can just nibble on any little pieces of cheese that falls off. Shhhh…don’t tell!

This is a great recipe to use up a loaf of bread like a baguette or Italian loaf – the drier bread makes for a better toast. But if you’re shopping specifically for the bread, do watch for sales.

The cheese is the pricier item, here. I have a strategy for what I call “Near Deli” cheese, just because it’s usually near the deli in the store. My store often has hang tags, which are coupons that are just hanging there that you peel off, sometimes with expiration dates that are months out. I always grab a couple (or look on the producer’s website) and wait for a sale, preferably a buy one get one free or get one half off. Hard Cheeses like Parmesan last a good long time. Check Aldi, too, if you have one – they have great prices. A wedge of cheese is almost ALWAYS going to be less than a package of grated cheese and will last longer in the fridge.

You can be flexible in the amount of cheese and what kind of cheese you use here. You can make the cheesy layer less dense and more lacy or go with a thicker layer. You can also decide how much cheese is going to go with each toast by placing the bread closer together or farther apart. Obviously, less cheese with the closer bread placement will be the less expensive way to make Parmesan Crusted Crostini. (I did once make a giant frico with one piece of toast, but that’s not a great cheese stretching strategy for all that it was totally awesome!)

I also love Romano over Parmesan. Romano is usually a bit stronger than Parm and usually costs less. A little goes a long way so it’s a great way to get more “bang for your buck” flavor-wise. Asiago works very well in this recipe, too, but doesn’t get quite as crunchy as Parmesan or Romano.

Working in batches if needed, heat skillet over medium-high heat. Brush with butter and place bread in a single layer. Cook until golden brown on one side, then remove from skillet.

Brush a little additional butter on skillet and sprinkle the bottom of the skillet with a layer of Parmesan cheese. When the edges have begun to brown, press the bread into the cheese, toasted side up. Continue to heat for a minute or two longer until the cheese is golden brown.

Remove skillet from heat, loosen the edges of the cheese and turn over onto a plate, platter or cutting board. Let cool until easy to handle then cut between the toasts to separate them.

I’ll be sharing Parmesan Crusted Crostini at Fiesta Friday #230 Our co-host this week is Diann @ Of Goats and Greens.