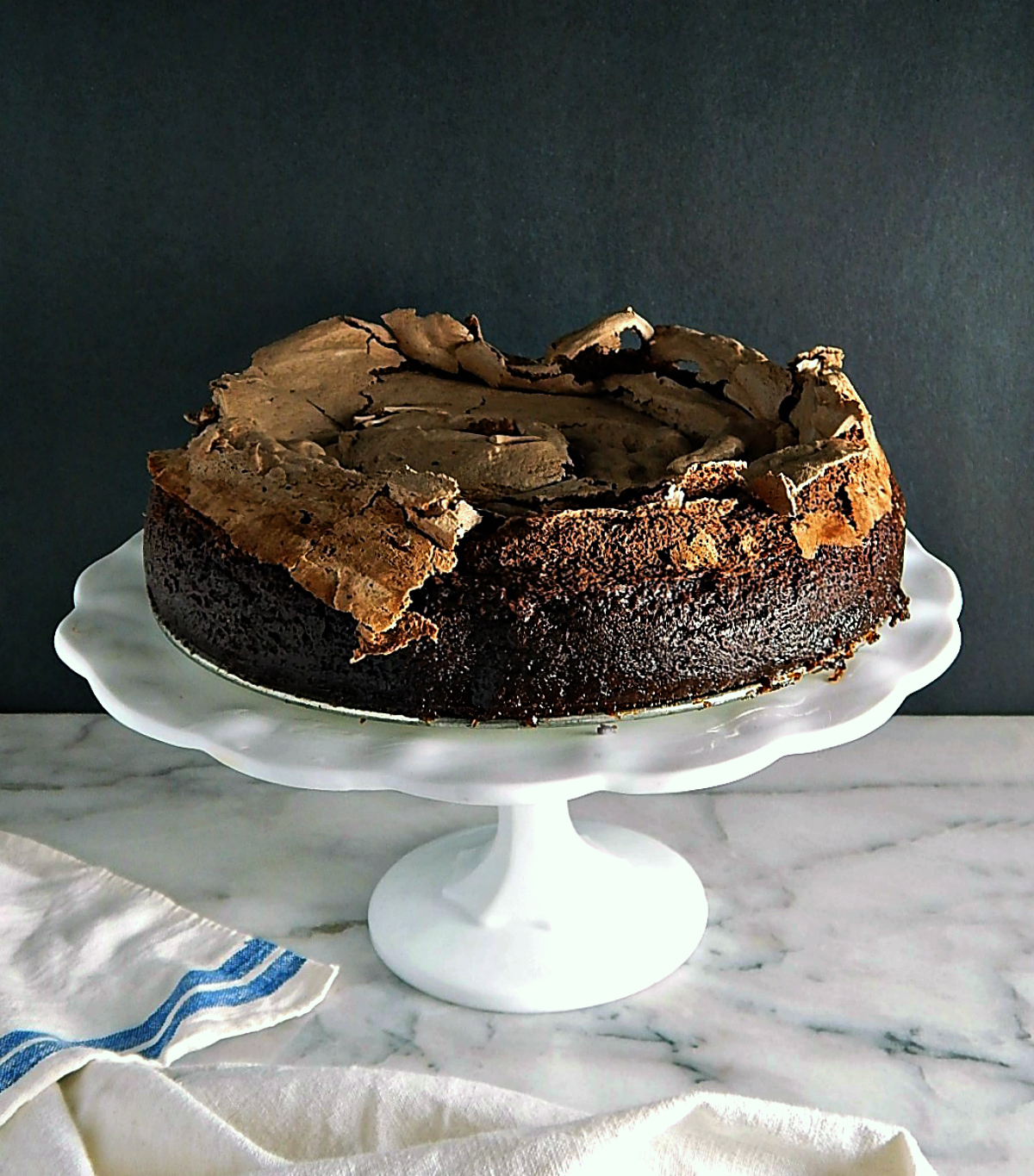 If you haven’t had a Chocolate Meringue Brownie Cake, imagine the outside of the brownie all chocolaty and chewy, the center, ooey, gooey deliciousness and then imagine that soft, marshmallowy chocolate meringue with that certain crispiness that only meringue has. And then imagine all those different chocolate flavors and textures, all combined in one bite. That’s a Chocolate Meringue Brownie Cake.

I just love this dessert. It’s packed with flavor from the chocolate and the cocoa and the range of textures is fantastic. If you’ve been following along with me, you know I love these Chocolate Meringue Cookies I made last Christmas and you might know I have the best brownie recipe, ever Hershey’s Ultimate Brownies, already. (They are why I don’t have many brownie recipes here. It takes a LOT to get me to “cheat” on MY brownies!)

But combining those two loves into one dessert? I’m on it! The only reason I haven’t made Chocolate Meringue Brownie Cake sooner is I had to adapt the recipe for American cooks (measurements & ingredients & I was lazy) and I was waiting for an occasion. Any occasion, though, would be great for this delicious, rustic treat. I just love the looks of Chocolate Meringue Brownie Cake, all cracked and freeform. It can go casual or fancy. If you’re feeling dramatic, bring it to the table on a cake stand still wrapped in parchment and unveil it in front of your guests. It’ll be messy and wonderful and shards of meringue will fly about that your people will probably find themselves pouncing on. Just don’t do that if you’re using a white tablecloth!

Of course, being a meringue, it’s made ahead! Bonus, right? Chocolate Meringue Brownie Cake is supposed to be served room temp, according to the recipe I adapted from Eric Lanlard, and it’s firmer, more cake/brownie-like, but still gooey. If you can time it just right (It takes about four to five hours to cool down to room temp) so the meringue is cool and brownie still slightly warm you and your guests (or family) are going to literally go into a dessert delirium – it’s like warm chocolate pudding cake. You may want whipped cream or vanilla ice-cream or creme fraiche as the original recipe from Chef Eric Lanlard suggests. You might just want tall glasses of milk!!

For all that this is a layered dessert and a meringue, this is a pretty easy dessert to make. You’ve gotta line the pan with parchment, which I always think is a bit of a pain, but really, it’s not that big of a deal. Just cut the pieces (trace around the bottom of the pan and make about a five-inch strip for a collar) spray the pan, press in the parchment and spray it again.

The chocolate base is made by hand with the exception of the egg whites which you’ll whip and fold in. Start out melting the chocolate and butter in a big glass bowl in the microwave, then add the sugar and egg yolks. Then fold in the egg whites. Then set aside the bowl and beaters for the meringue.

Yep. You heard me. After beating the egg whites to fold in the brownie part, you’re going to make meringue, then fold in the cocoa/cornstarch mixture and top the mostly baked chocolate layer and finish it all off with another 25 minutes in the oven. I wanted to break it down because when I first read the directions, it seemed a lot more complicated than it is.

This isn’t really a hugely expensive dessert to make. I just used chocolate chips because it seemed I was all out of any other chocolate. How that happened, I don’t know! I probably ate it and forgot, lol! Your choice of ice cream, whipped cream or creme fraiche to go alongside are going to cost more than the Chocolate Meringue Brownie Cake.

The recipe is going to need 9 eggs – five for the brownie layer and four egg whites for the meringue, so plan ahead for a use for the additional yolks or freeze so they don’t go to waste. Maybe you’d like to make a custard (why don’t I have creme brulee here?) or a Hollandaise Sauce like my Fail-Proof Blender Hollandaise Sauce. Put your yolks in a small container, cover with a tablespoon of water, lid and keep for 3 to 4 days in the fridge.

This is a great recipe to make if you happen to have extra egg whites building up in your freezer. I’ll be adding it to my collection of Over 75 ways to use up Extra Egg Whites.

For the brownie layer:

For the chocolate meringue

For the brownie layer:

To make the brownie, melt the butter and chocolate together in a heatproof bowl set over a saucepan of barely simmering water, making sure the surface of the water does not touch the bowl or using a large microwave proof bowl, melt in the microwave on defrost setting for two 2 minute intervals stirring between and after. Add the sugar, stirring until it has completely dissolved. Stir in the egg yolks.

In a clean, dry bowl, whip egg whites to soft peaks. Fold a few tablespoons of the egg whites into the chocolate mixture to lighten, then fold in the remaining whites using a rubber spatula. Spoon the mixture into the prepared tin and bake in the oven for 40 minutes. Set aside beaters and bowl.

For the meringue layer:

At about 30 minutes of time (10 minutes before the 40 is up), make the meringue topping. Whip egg whites to stiff peaks, adding the sugar a little at a time when the whites reach soft peaks, then add the vanilla extract. Sift the cornflour and cocoa powder together, then fold into the meringue by hand until the mixture is even and glossy.

Remove the chocolate brownie from the oven and very gently top with the meringue in small dollops. Smooth, making sure meringue reaches to the parchment around the edges. Return to the oven for a further 25 minutes, or until the meringue puffs up and a crust forms on the top but the centre is still quite soft. Leave to cool in the tin. The centre will collapse slightly.

Note: this is 9 eggs total. Five for the brownie layer and 4 egg whites for the meringue layer. Have another recipe in mind for those four extra egg yolks.

I’ll be sharing Chocolate Meringue Brownie Cake at Fiesta Friday #230 Our co-host this week is Diann @ Of Goats and Greens.