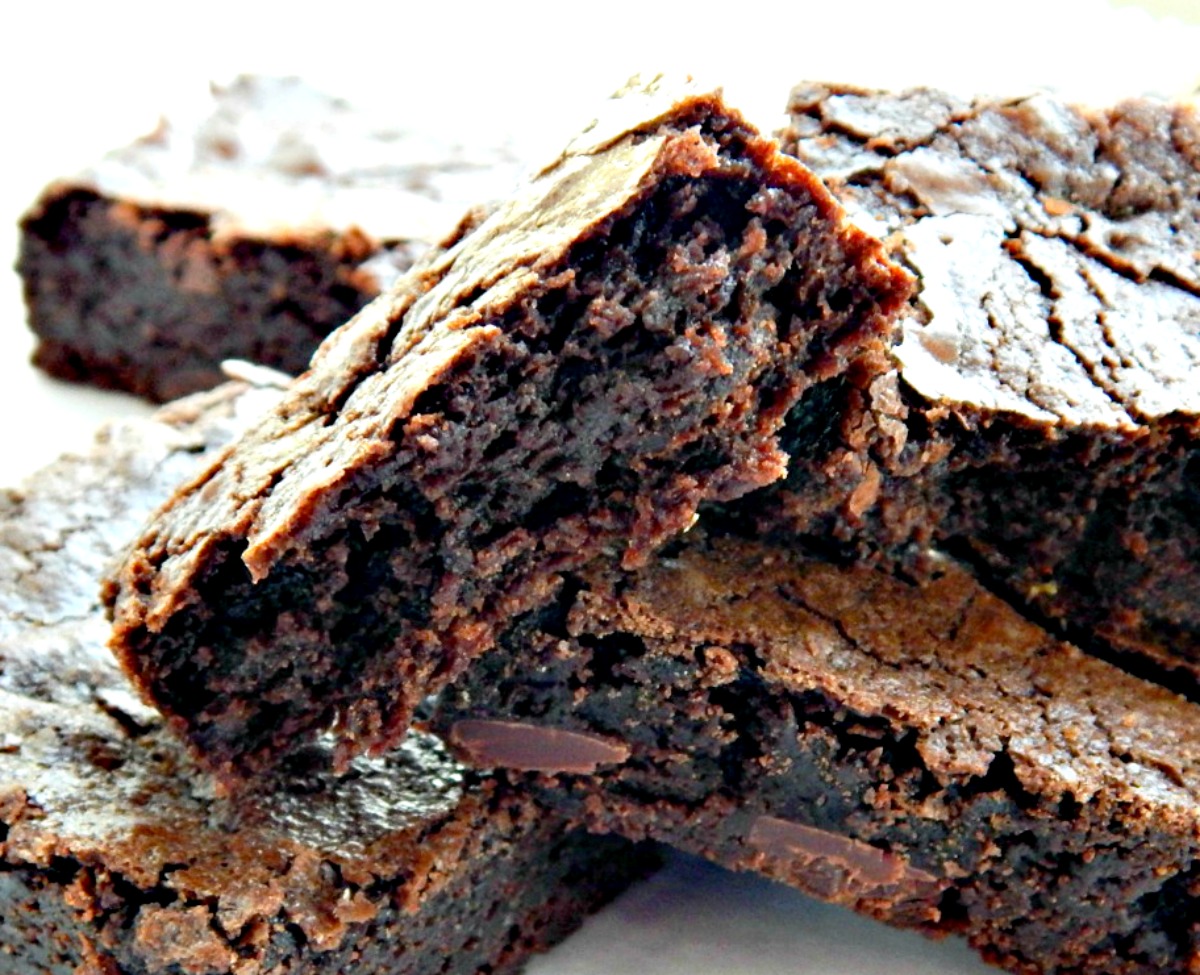 Hersheys Ultimate Double Chocolate Brownies are an unabashed brownie, a bit forward, maybe even impertinent in their rich, chocolate taste. If these brownies were a person, they’d be Melissa McCarthy in Identity Crisis. A bit loud; bordering on obnoxious and a little messy around the edges.

Not a pretty, refined, well-behaved brownie, Hersheys Ultimate Double Chocolate Brownie are deeply chocolate, heavy in the hand, and a bit chewy, with that classic, shiny top that’s the hallmark of a really great brownie. They are my dream of the perfect brownie, and I hope you’ll like them, too.

When you eat Hersheys Ultimate Double Chocolate Brownie, you’ll want to have milk on hand. Lots of milk. They are just that rich. Deep, dark, luscious and rich. There’s a story behind these brownies, but first a warning: Be careful to whom you serve these; a gentleman once proposed to me after one of these. (disclaimer: Your results may vary.)

When I was just a youngster, I found this recipe on the back of a Hersheys cocoa can (yes, cocoa used to come in actual cans) and they became my one and only brownie. My true love. One day I picked up a can and the recipe was no longer there, replaced by another. Every time I bought cocoa I’d search through all the cans to no avail. For years I searched.

Fast forward to when the internet became available. The search began, anew, but in vain. I kept hoping some cook would put the recipe online, but it never happened. (I knew I would recognize it because the technique is so unusual.)

Finally, I was rewarded in my diligence! Hershey’s published an archive of recipes and I found my brownie – and it did not disappoint. The only thing I wonder about, to this day? What if I had accepted that proposal? Would the gentleman in question have felt cheated in not having those brownies for all those years? I know I did.

Like most brownies, this recipe for Hershey’s Ultimate Double Chocolate Brownies is pretty easy, but it does have a couple of extra steps. One is that it uses melted butter and the other, boiling water. See, the cocoa is bloomed in boiling water, and ever since I first made these brownies, whenever I see a recipe that calls for boiling water
(or hot coffee) and cocoa, I know it’s going to have great flavor.

And of course, as you look through the ingredients, it’s easy to see that this recipe is double chocolate. First, there is the cocoa powder, and a good amount of it, then there are the chocolate chips, just for good measure. The chocolate chips pretty much melt in, which is a good thing. If you do chop any chocolate pieces for your brownies, you won’t want to add any dust or slivers; it’s just too much of a good thing. It melts right in and can make the brownie seem oily.

It’s funny but while most homemade items are always more inexpensive to make, brownies are a bit of an exception. That is if you buy one of the basic boxes, especially on sale, and especially with a coupon. Of course, for some mixes, you need to add oil and butter. I’d def compare Hersheys Ultimate Double Chocolate Brownies with the premium brownies that have chocolate chips just like this recipe does. Then, if you’re a good shopper you’ll be better off with homemade.

Do shop well for your baking items. If you like name brands, shop the Holiday sales and stock up. If you can’t do that for some reason, check both Aldi or Costco (everything will be in larger bags at Costco) to pick up at prices that rival grocery store sales prices and beat out everyday store prices.

Stir cocoa and soda together in large bowl. Add 1/3 cup of the melted butter and stir in. Add 1/2 cup boiling water and stir until thickened.

Stir in sugar, eggs, and the remaining butter until smooth. Add flour, vanilla, and salt. Fold in chocolate chips.

Makes about 24 brownies if cut three across the short side, eight along the length.

Did you know that if you bake in a glass pan when the recipe doesn’t specify to do so, that the oven temperature should be turned down by 25 degrees?

I hate to simply publish a recipe put out by a company like Hershey’s, when it’s now so easily found on their site, but over the years it has become such an “expected” recipe for me to bring places, I know my friends and family will love seeing it here. It was my go-to recipe in the 1970s through the 1990s and now is again!