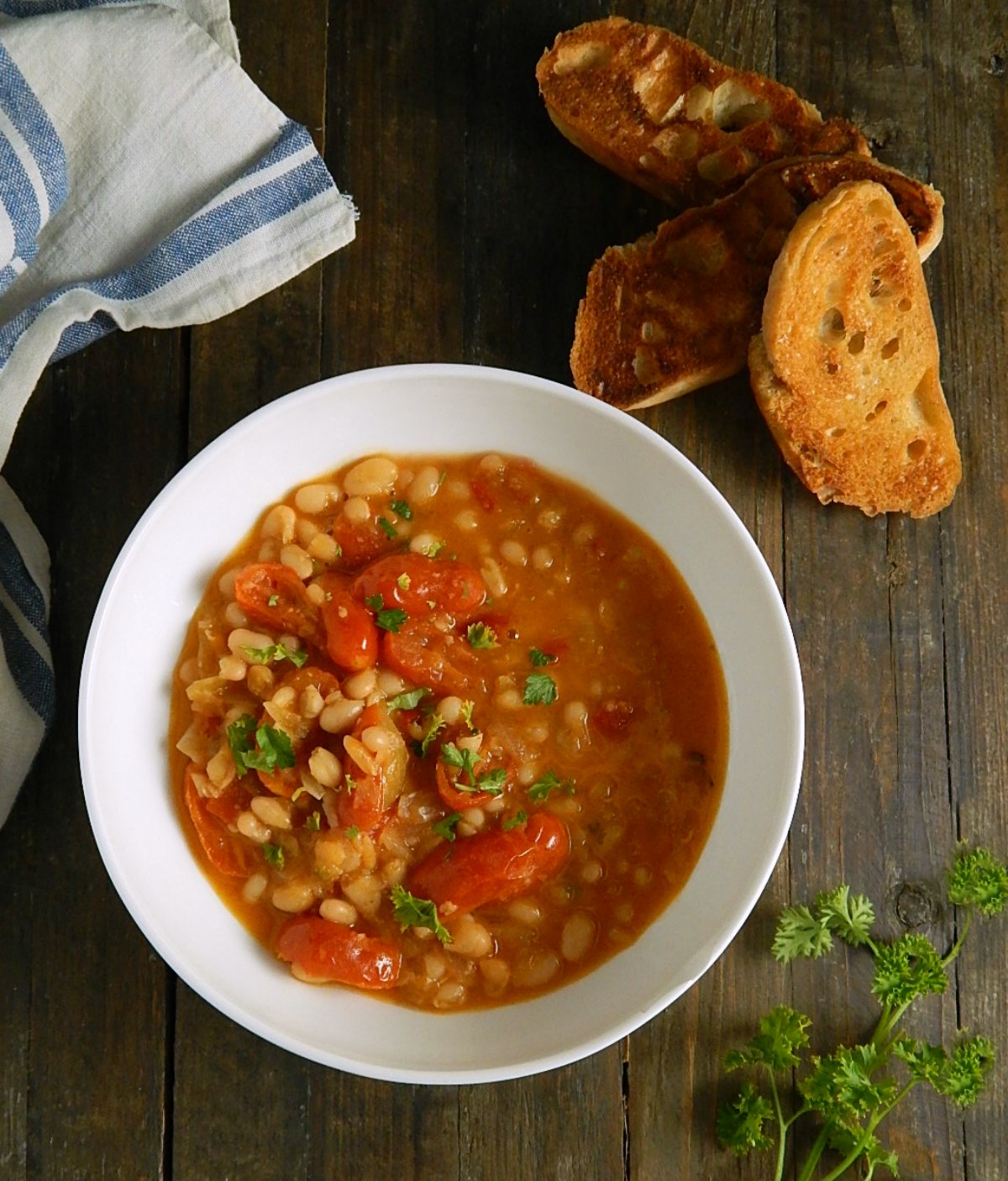 I’m always excited when I see a major food magazine put out a simple recipe using wholesome ingredients like this White Bean Ragout with Garlic Toasts. The world of cooking is changing, especially as far as major food magazines are concerned. More and more I’m seeing magazines like Bon Appetit paying more attention and recognizing simple flavors and everyday ingredients that stand on their own and have their own integrity.

So you might recognize White Bean Ragout with Garlic Toasts as a simple, everyday Italian recipe, but like many recipes like this, it’s not that far of a leap to find similar recipes in many cultures – even back in the day in the States when beans and toasts were a mainstay during the Depression. I guarantee, though, that this recipe is much more fabulous than that, and probably a lot more fabulous than you can imagine. This is a recipe I’d urge you to try!

This recipe is really kind of like a cross between a soup and a stew; it’s hearty and filling and unbelievably good with the little garlic toasts that are served either under it to soften as they sit there or on the side (that’s how I like it) to scoop up and act as a vehicle to get the ragout to your mouth!

It’s a marvelous play on textures. The soft, comforting beans (assuming that you like beans) the tomatoes that have burst and helped, along with the touch of Parmesan cheese, to form the sauce and those marvelous, crispy garlicky toasts. You might notice that the flavors are simple; this recipe relies on a Sofrito (more on that, below) for flavor, a little garlic and the slightest touch of red wine vinegar.

There’s nothing that you might expect in an Italian recipe as far as herbs or spices; there’s no basil, oregano, fennel and so on. In a way, that makes this recipe seem almost light and it’s a refreshing change. It’s really that simplicity that “makes” this dish.

So let’s talk about the word “Sofrito” since that might (or might not) be new to you. You’ll find Sofritos from all over the world and every place has its own touches. In this case, it’s a mixture of olive oil, peppers, and onions slowly cooked to an almost jammy consistency. A good sofrito takes a fair bit of time to make.

Bon Appetit did something you don’t see much in a food magazine like this: They took a part of the recipe, a sofrito, and rather than cooking up just enough for the recipe, instructed you to make a larger amount, use part of it in the recipe and freeze the rest  for another batch or another recipe. It makes sense to maximize your time and sofrito can be used in many ways, to shortcut all kinds of dishes.

This resonated with me because I like to make batches of Sofrito in the fall when the ingredients come from my garden, or maybe from the store when they are at a low, and freeze portions in packets to use through the year. You can see my recipe, Sofrito – A concentration of Summer’s flavors. And on that post, I give you a few more ways to use the sofrito, too.

A trough won’t fill in when Sofrito is done.

While it might be smart to make a bunch of Sofrito, divvy it up and then use it for this and other recipes, I get that not everyone is going to be up for a project like that – maybe you just want dinner?! So I give instructions to use the Sofrito, but I also reworked this recipe so it can just be made as a stand-alone dinner. So now you have two options.

When I make this White Bean Ragout as a stand-alone recipe like that, I might use red bell pepper but I like to use Roasted Red Bell Pepper even more, for just a little extra touch of flavor. Either works.

Now, there is a surprising amount of olive oil in the recipe, at least to those of us that are used to starting out recipes with 1 tablespoon of oil; in the first place, you almost always need to add more oil to recipes like that anyway, and in the second place, the olive oil is an essential part of the broth in this recipe; it’s an actual ingredient that’s key to the flavor and texture. Besides, olive oil is so good for you! Don’t’ shy away from it and use the best olive oil you can for this, especially for the drizzling.

For the Garlic Toast in the recipe, you can buy or use a take and bake bread, or if you plan ahead, you can’t go wrong with this easy, overnight no-knead Crusty Bread. It can seriously be made for about a quarter! That’s counted from buying a jar of yeast and just pricing out the ingredients for this loaf.

Beans are always going to be less if you buy them dried and cook your own. Canned are usually three to four times the price of dried, Watch for dried to be on sale around any holiday where ham is featured and they will often be unadvertised. Canned beans are usually on sale sporadically throughout the year, though some of the best sales are in late summer to early fall when the warehouses are full and producers want to move their product.

While there’s no doubt that the cherry tomatoes are absolutely lovely in this dish, they’re a little pricier than full-sized ones. You can use a couple of whole tomatoes, seeded and chunked and it’s still totally delish – and maybe even truer to the original old school recipes. That being said, look for cherry tomatoes or grape tomatoes, etc., on sale and check Aldi, too.

Bell Peppers can be pricy, too, especially the colored ones. Buy them on sale, and when they are at a great price, buy some for the current week and for the next; they do keep very well for a week or two. If the price is really great, you can’t go wrong with roasting off a bunch and stocking your freezer in Ziplocs with amounts that make sense for your family. If you have a good homemade vegetable or chicken stock (see my recipe for Chicken Stock if you want) a recipe like this is particularly inexpensive.

Sometimes when I talk about ingredients, I feel like the Little Red Hen. Do you know the story? She wants to make bread (sometimes a cake) and everyone is psyched. She says “Who will help me?” for each stage of the making from growing the wheat through the eating! But making/doing yourself has a huge payoff. If this recipe is made with all sales priced homemade items it can be brought to the table for under three bucks! Just buying nilly willy, and using all the convenience products ups the price considerably. Just the chicken stock will run about $2.50. You could potentially spend 10 to 12 bucks, maybe more.

For the White Bean Ragout:

For the Garlic Toast:

Heat 3 tablespoons olive oil in a large heavy skillet over medium heat. Add onion and bell peppers and season with salt and pepper. Simmer slowly, stirring often, until vegetables are completely softened, about 20 to 25 minutes. Add finely grated garlic and cook for a minute until fragrant. Push aside the vegetable mixture, add and tomato paste and cook, stirring often, until tomato paste begins to turn deep red, about 2 to 3 minutes.

Stir in 3 cups broth; bring to a boil. Simmer briskly, scraping up browned bits, until liquid is slightly thickened, three to four minutes. Add tomatoes simmer until tomatoes are tender, another three to four minutes. Add the beans and heat through. Stir in two tablespoons Parmesan. Add in the vinegar. Taste and adjust salt and pepper. If you’d like a thicker sauce, mash a few of the beans and gently stir.

If desired, divide bread among shallow bowls. Top with some bean mixture and broth. Garnish with remaining 2 tablespoons Parmesan and parsley. Drizzle with the remaining olive oil. Alternatively, serve the toasts on the side.

To make the recipe with Sofrito:

Instead, add about two tablespoons of olive oil to a large skillet or Dutch oven. Add one cup of sofrito and heat through over low heat. Turn the heat up to medium-high and cook several minutes, allowing some of the Sofrito to color just a bit. Proceed with the rest of the recipe.

Meanwhile, as the recipe simmers, make garlic toasts. Rub 1″ slices of bread with a crushed garlic clove. Using a brush, spread with a little olive oil. Preheat broiler and broil several inches away from flame for several minutes until browned. This is best done on a rack so the bottoms of the bread stay dry.

Timing of 45 minutes is with sauteing the vegetables; this is considerably quicker if using a sofrito; the timing does not include cooking the beans if not buying in a can.

Yes, beans can be fabulous! Case in point this marvelous White Bean Ragout with Garlic Toasts, a blend of tomatoes, peppers, and Parmesan form the broth. #WhiteBeanRagout #WhiteBeansTomatoes #ItalianWhiteBeans

One thought on “White Bean Ragout with Garlic Toasts”