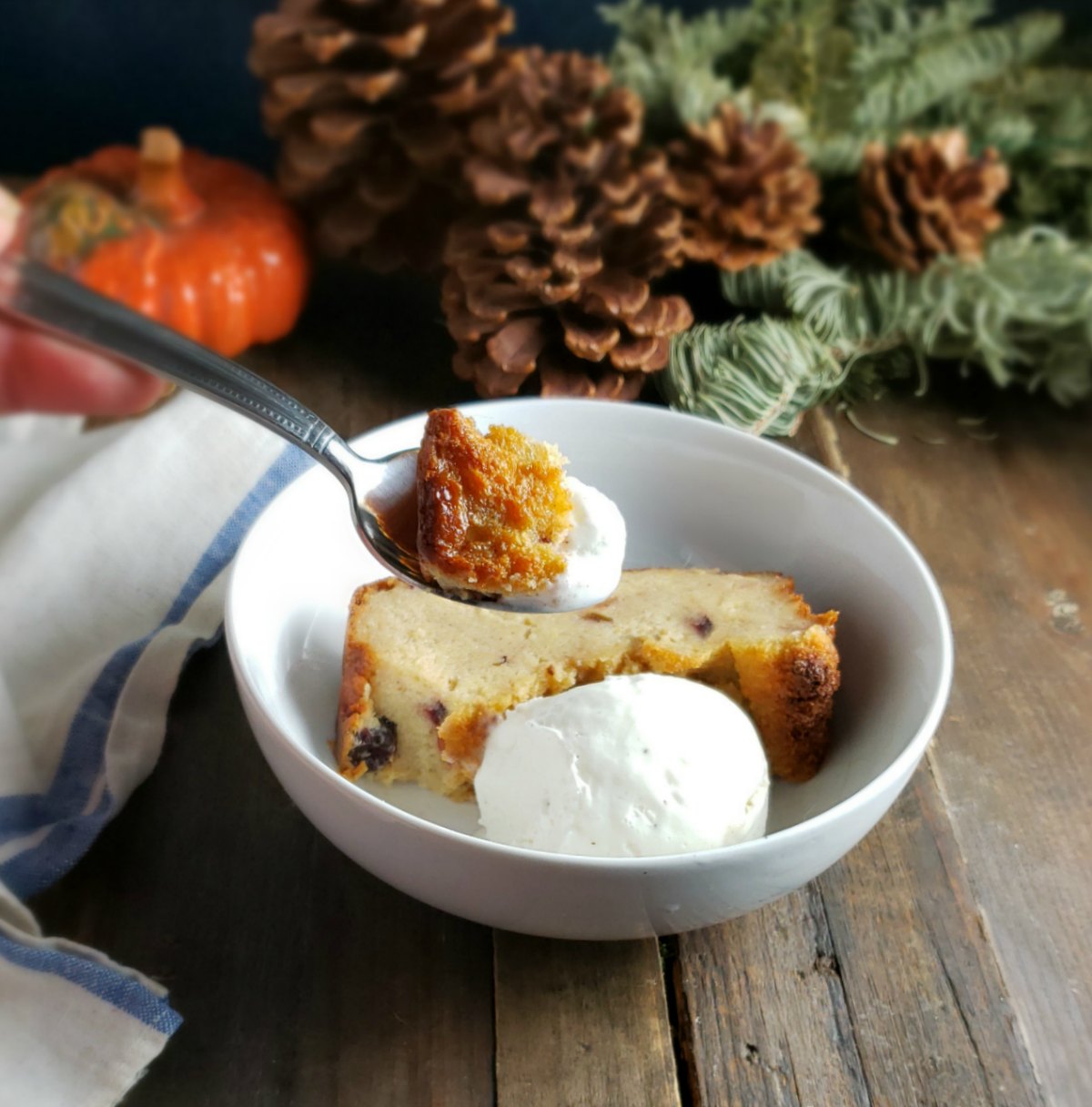 This Cranberry Bread Pudding is a great little bread pudding recipe that I’ve been making for years and years! Oh gosh, at least a dozen or so. I feel sad that I have neglected to post it before, thereby depriving y’all of this recipe! 🙂 Seriously, it’s good, very, very good. I almost want to say yummy, but there are lines I won’t cross! 🙂 In case it’s not coming across with the written word, I do like to tease a bit.

I originally lifted this recipe off of Emeril LaGasse as a way to use up a little leftover cranberry sauce. And I’ve kept making it because I love it so much. Besides that it’s delicious, this isn’t as humungous as some bread puddings, it’s easy to make and doesn’t require a water bath, and for bread pudding, has a short soak time & bakes up fairly quickly. Those are huge plusses for me. If there’s a downside, it might be that it’s not as impressive looking as some bread puddings, so I’d classify this as more for the family rather than for “company” or “entertaining.”

I decided on a whim tonight to whip this up & and pop it in the oven (I told you it was fast & easy) but the folks (my favorite octogenarians) went to bed early. I snuck upstairs, being as quiet and stealthy as I could be when it was done. I was concentrating so hard on not making any noise…

I pulled it from the oven, turned and BAM! (See that Emeril reference!) There was my Stepmom! Right there a foot away as I turned with the screaming hot pan! Scared the living you know what out of me and it was only by luck I didn’t drop it! So we did the only sensible thing and dug in, with a little vanilla ice-cream on top of that warm, soft bread pudding. Best midnight snack, evah!!

Which brings me to how to serve this bread pudding (now that I’ve wasted that minute of your life). Emeril served his with Bourbon Whipped Cream & mint & his signature powdered sugar. I just think Whipped Cream is too light for good, solid bread pudding, hence the ice cream or even a Vanilla Custard Sauce. If you’d like to see his original recipe, you can find it at his site.

What Kind & How Cranberry Sauce to Use:

First of all, you need a whole berry cranberry sauce not the jellied kind. This recipe works well with a whole cranberry sauce that’s homemade or one that’s store-bought.

How Much Cranberry Sauce to Use:

Emeril uses two cups of a whole berry cranberry sauce in his bread pudding but this is my go to recipe for leftover cranberry sauce. I’ve only made this with what I have on hand. I know it works well with 3/4’s a cup up to about a cup and a half of cranberry sauce, but obviously, more sauce equals more cranberry flavor.

Even with a cup and a half, it comes dangerously close to the top of the bread pan called for when it’s filled and rises up over the top of the pan by about an inch when it bakes. Any more, I think, would be a pretty close call. If you use the full amount, maybe put it in another pan and def put some foil underneath to catch any drips. I do that anyway, just in case.

The recipe calls for stale, day-old bread. And sliced sandwich bread (a decent, heavy one) is just fine. So bonus for readily available and cheap! Since bread slices vary in size, especially if the crust is removed, Emeril gives a measurement of 4 cups. But he slices his into 1/2″ cubes, which are tiny. I usually try to cut mine into 3/4″ cubes, but a lot are probably more like an inch, and measure about 5 cups. The recipe always seems to work out well. Most of the liquid should be absorbed after the 30 minute soak. If it’s not, add a little more bread and let it sit awhile longer.

The amount of cranberry sauce in the ratio doesn’t seem to make that much difference in the bread pudding although I’ve noticed if the sauce is very liquidy, the pudding needs to cook much longer, part of the reason I don’t use a really “saucy” sauce. In that case, a shallow pan rather than a bread pan would help to make sure it cooks through.

The custard is simple. Mix it up in a big bowl and then add the bread cubes and soak for 30 minutes. Emeril says to stir once or twice, which basically makes the bread pudding one cohesive mass. I like to just gently press down on the bread, which I think gives it a better texture, especially on the top after it bakes.

Butter that pan very generously! If you use a glass pan, you might need a few more minutes in the oven. And of course, keep in mind that bread pudding will be soft right out of the oven but it shouldn’t be liquidy squishy. The top should be as golden brown as a pinkish bread pudding can get! If the top looks like it will get too dark before the bread pudding is finished, place a piece of foil over the top.

Of course, any bread pudding, especially if it’s not too rich with lots of cream and loaded with “fancy” or expensive ingredients, is a reasonable dessert to bring in at a budget. Especially if you’re using stale bread and giving it new life. There are lots of Ways to Use Stale Bread, but bread pudding is high on my list. Although honestly, the majority of my stale bread ends up as much less glamourous bread crumbs!

Cranberries are very seasonal and almost always at a great price around Thanksgiving. If you use them year ’round like we do for things like muffins (see Big Beautiful Muffins) and quickbread or maybe other recipes, stock up on them and chuck them in your freezer when they are at a low. Put them in a Ziploc if the package is punched full of holes. The fall pricing is competitive and at 89 to 99 cents for a bag (a pound) that means this tart fruit is something that you might consider using more often. Cranberries – not just for Thanksgiving anymore! I gotta give a shout out to my Pork Tenderloin with Caramelized Onion & Cranberry Compote!

Both cream and half and half vary wildly in price depending on when and where you buy it. If you have an Aldi nearby it’s a great place to pick it up. Generally, the buyer’s club prices are close to the Aldi price but you’ll need to buy larger containers. If you’re buying at your grocery store, stock up during holiday sales; it can be up to half off. With it’s higher fat content, either cream or half and half keeps for weeks in the fridge, unopened. The cost of half and half should be roughly half the price of a container of whipping cream; if it’s more, you’re better off buying cream and cutting it with milk, which runs about 8 cents a cup in most areas.

Whisk together eggs, sugar, cinnamon, nutmeg, vanilla, and cranberry sauce until very smooth. Stir in half-and-half (or milk & cream mixture) and then add bread. Let the mixture sit for 30 minutes, pressing down on the bread occasionally.

Pour the mixture into the prepared pan. Bake until the pudding is set in the center, about 55 minutes minutes to an hour 10 minutes. Cover top loosely with foil if it is browning too fast. When finised, let cool for 5 minutes.

To serve, cut the pudding into 1-inch thick slices.

If you wish to cut the pudding into very clean slices, refrigerate until cool, slice and rewarm in the microwave for a moment or two. Larger slices are fine but will serve fewer people.

I’m also taking this to Fiesta Friday 102, hosted by Angie of the Novice Gardener! Thanks, Angie, for all you do! She’s backed up by two fantastic bloggers,  Elaine @ foodbod and Julie @ Hostess at Heart.