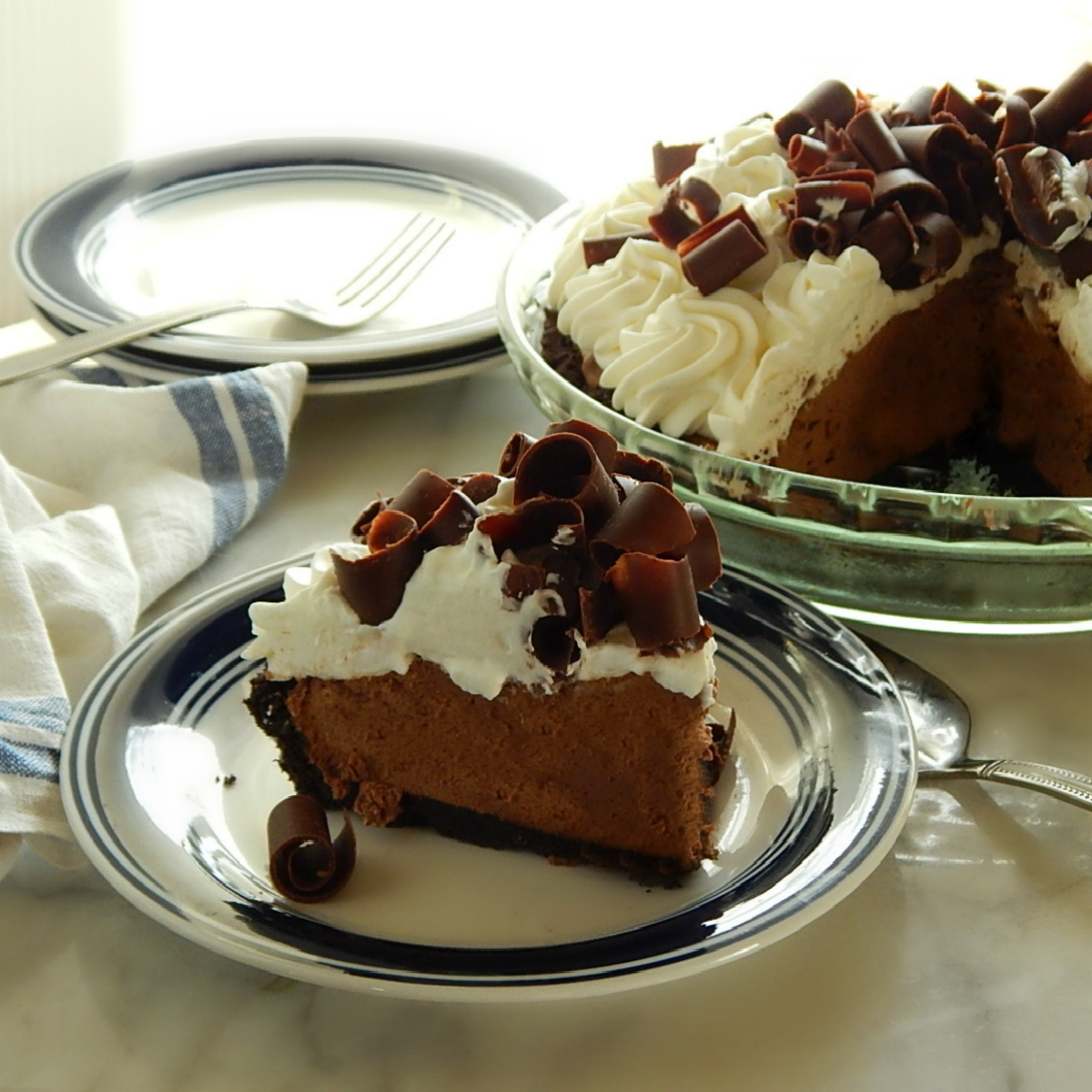 French Silk Pie! The End. Seriously, that should be all that needs to be said. Just say French Silk Pie and most people will come running! This has got to be my son’s very favorite pie of all time…and I have a hard time turning down a piece, too. Rich, chocolate, creamy and airy deliciousness.

For years, my Cafe Latte Turtle Cake was my family’s go-to Birthday Cake, but at some point, Kraig (my son) started requesting French Silk for his birthday instead. He reminded me that for a little while, the old Better than Sex Cake (which my Mom used to call better than Robert Redford because she didn’t say the “S” word) was a favorite, but that’s a post for another time.

But French Silk for a birthday – that’s more than ok with me. It’s not only delish, but it’s also gorgeous and it doesn’t require much effort. Heck, as long as you have a mixer, just about anyone at any skill level can pull off this show stopper.

About this French Silk Pie:

I have no idea where I got the original recipe, it’s been passed around so much, but my recipe card says to use a pastry crust. Over the years, I changed it up with a graham cracker crust, which is nice, and finally settled on an Oreo crust. Because chocolate on chocolate! You can use any kind of crust you’d like, though, homemade or storebought. Not everyone is a chocoholic like I am.

I also put a smidge more chocolate in my French Silk Pie. Just a smidge because too much will ruin the glorious melt in your mouth silkiness that the French Silk Pie has. I guess that’s how it got its name, that silkiness. Garnishing can depend on how ambitious you are feeling and what kind of crust you’re using.

If you’d like to use an oreo crust, check out my post on Mastering Oreo Crust Like a Boss. Just make sure to use a deep-dish pie plate and enough crust to fit.

What’s so nice about this pie is that it’s all no-bake. Super easy. It IS important that the butter is at the right temperature; it should be able to bend and hold its shape and not break. Beat the filling exactly like instructed after each egg. If you are using a hand mixer, beat after every egg just a little bit longer, a minute or two. All that beating is what makes the sugar dissolve so the pie is silky and makes this pie so light and fluffy. The mixing can’t be “cheated.” Take your time with it.

If you’re making the Stabilized Whipped Cream option, you need gelatin. The most popular (and the only one I’ve ever seen although there are others) is Knox gelatine. It’s usually right by the puddings and jellos, which are in the baking aisle, in a tiny box and almost always on one of the top shelves.

What you need to know about Knox Gelatin

There are several options for topping a French Silk Pie, so choose what suits you.

When making French Silk Pie, there are a lot of variables depending on the options you choose. Homemade is always going to be more cost-effective in all the options.

As far as the shell of the pie, generally, a graham cracker crust is least expensive, pastry next and an oreo shell the highest. This can change with sale prices. Garnishing with crumbs as opposed to chocolate curls will be a savings.

Always buy baking goods during holiday sales or check Aldi or Costco/Sam’s Club for the best savings. The whipping cream and butter are some of the priciest items in French Silk Pie. Shop well for them. Sale prices can be half of the regular store prices.

For the French Silk Pie:

In a small microwave-safe bowl, melt chocolate, using 30-second increments in the microwave, stirring after each. Set aside to cool to room temperature.

In a large bowl, beat with electric mixer, preferably in a stand mixer with a whisk attachment, the butter until light and fluffy. Gradually add the sugar while beating, then the vanilla. Add the melted and cooled chocolate and blend well.

Add eggs, one at a time, beating for a full three minutes after each egg if using a stand mixer, stopping to scrape the bowl before adding each additional egg. If using a hand mixer, beat 4 – 5 minutes. Time this. It’s important for a light fluffy pie with dissolved sugar.

Scrape into prepared pie shell, mounding in the center to a nice dome and refrigerate for at least two hours before serving.

Serve topped with whipped cream, stabilized whipped cream or other topping of choice and chocolate curls or garnish of choice. For the presentation shown, use the Stabilized Whipped Cream Option. Spread a thin layer of the stabilized whipped cream over the entire pie. Using a large star tip, pipe mounds of the topping around the outer edge and then go around the second time closer to the center. Mound chocolate curls in the center of the pie and scatter a few over the piped mounds.

For the Whipped Cream:

Add cold whipping cream to a mixing bowl. Whip until soft peaks form, then turn to low and add the powdered sugar and then the vanilla. Turn mixer back to high and beat until stiff peaks form.

For the Stabilized Whipped Cream:

Place water in a small pan, sprinkle with gelatin. Allow to sit for several minutes to soften, and in the meantime, start whipping the cream.

Add all but 3 tablespoons cream to mixing bowl and beat until soft peaks form. Pause and turn your attention to the gelatin. Stir the gelatin mixture and heat over very low heat until the edges turn clear which takes literally seconds, remove from heat and gently stir until dissolved. It will turn clear. Add the reserved three tablespoons of cream to the gelatin mixture and gently mix in. (Don’t make the gelatin mixture ahead and let it sit; it will gel up and have to be gently remelted to a liquid state.) Turn the mixer with the softly whipped cream on to low, add the gelatin/cream mixture and beat for about a minute until gelatin is incorporated. Add powdered sugar and vanilla and mix in on low speed, scraping as necessary. Turn mixer to high and beat until stiff peaks form.

You know I’ll be bringing this to our Throwback Thursday #21 Link Party, hosted by Quinn of Dad What’s for Dinner, Meaghan of 4 Sons are Us, Alli of Tornadough, and Moi! That’s right – me! Click on the blue leapfrog, below, to view all the posts!

I’m also taking this to Fiesta Friday 102, hosted by Angie of the Novice Gardener! Thanks Angie, for all you do! She’s backed up by two fantastic bloggers,  Elaine @ foodbod and Julie @ Hostess at Heart. Thanks, ladies!!