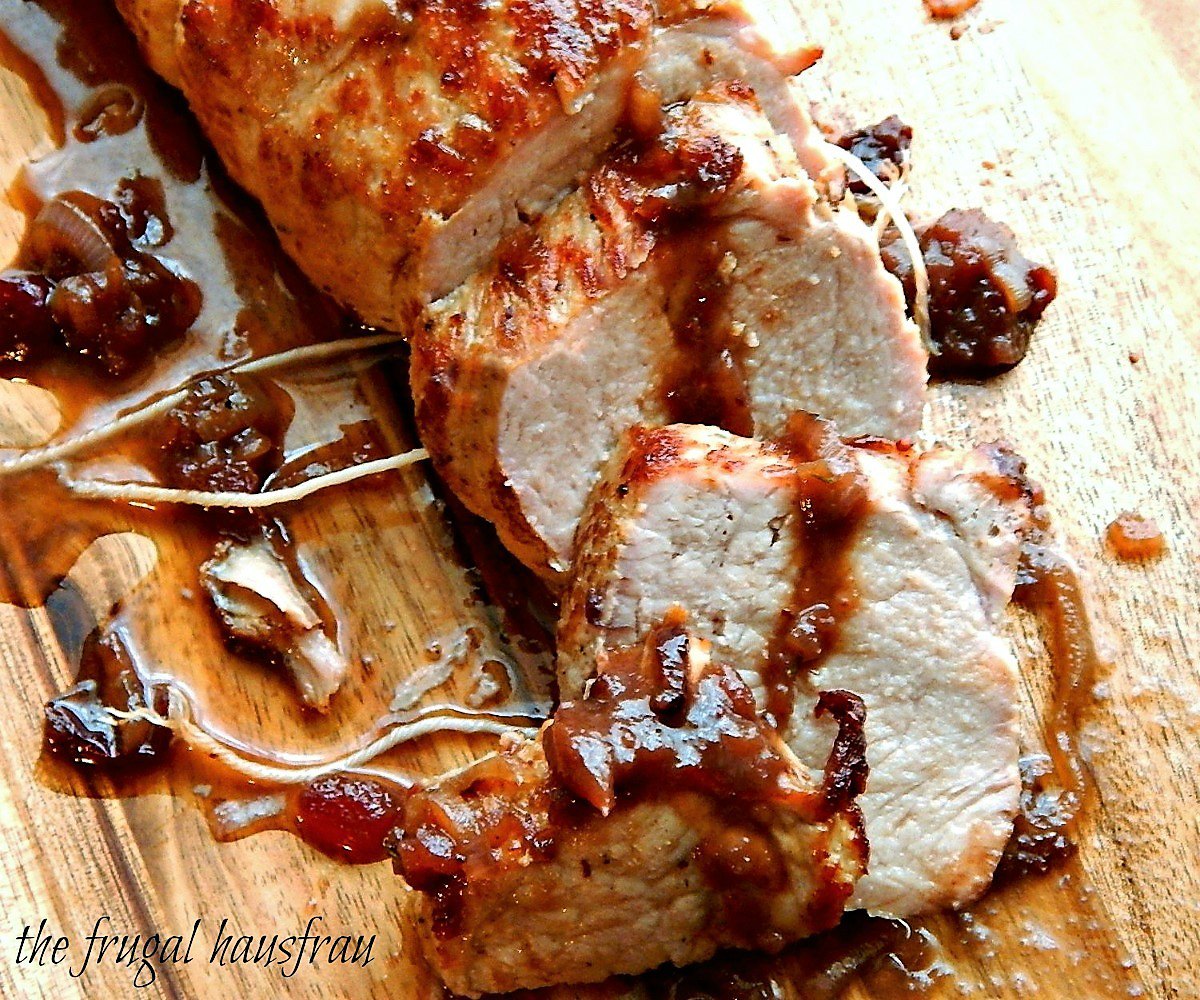 If you’re looking for a fun way to use up a bit of leftover Cranberry Sauce, this easy and fast Pork Tenderloin with Caramelized Onion Cranberry Compote is it. Of course, you can make it anytime but it is perfect for after Thanksgiving when you *might* already have a little Cranberry Sauce on hand. Don’t we all usually have a little, or maybe even a lot?

If you have no cranberry sauce, you’re not stuck. Think about riffing off of this by using a little good tart jam of another flavor; after all, what is cranberry sauce other than jam, after all. This is really a versatile recipe and would be great with apricot or blackberry, especially.

That sauce of caramelized onions, a touch of balsamic vinegar with the cranberries is fabulous and there’s just a touch of sweet that takes it over the top. And of course, pork tenderloin is always such a nice choice for a dinner but the sauce? That sauce really steals the show. You’ll find yourself eating the tenderloin just as a vehicle to scoop up every last drop of that luscious saucy compote.

I originally made this recipe from a November 1998 Bon Appetit and over the years it’s morphed and changed to this. I simplified the cooking method and changed it up just a little – it has the same ingredients but caramelizing those onions is a game-changer when it comes to flavor, and I went a little lighter on the rosemary.

BA says to serve with roasted squash, corn muffins and boiled green beans with orange zest and end with vanilla ice cream topped with warm chestnuts in syrup. Odd choices, I thought. Maybe because I can’t see squash with the flavors of the sauce and green beans are so hard to find in the winter. I’d be more likely to go with sweet potatoes (probably leftover from the same holiday I had cranberry sauce) and something like Brussels sprouts, maybe roasted at the same time as the pork tenderloin. Just half them, toss them in a little oil, sprinkle with salt and lay them out on a sheetpan. If you put them in at the same time as the tenderloin, they’ll be done about the same time as the pork tenderloin is done resting. Stir them and turn them about 1/2 way through the 25 minute cook time.

You’ll want to brown the tenderloin on all sides, then transfer it to a pan and bake it off. In the photos, I went to 160 degrees and as it rested, it went up to about 165, which left it thoroughly cooked and still juicy. These days it’s safe to not cook pork to well done like this, so cook for less if desired. Just use a thermometer and you’ll always get it just to your liking.

I mentioned the caramelized onions earlier; I think it really makes the sauce. Just take your time and cook them slowly in the same pan the pork was browned in; they’ll pick up all that flavor and turn golden and luscious. Then in goes the rest of the sauce ingredients and they’re reduced, all done as the pork cooks away. At the end, don’t forget to toss in any juices from the pork cooking and resting!

Using up leftovers is one of the best ways to save money; they’re the most expensive food in the house. You paid for them transported them cooked them and stored them so that’s not just money invested, it’s time. And while I mentioned you can replace cranberry sauce with a good jam, cranberry sauce is infinately less expensive.

As far as the pork, you’ll likely find pork tenderloin on sale during the fall and multiple times during Holiday Shopping Weeks. Because tenderloin is almost always packaged these days be producers, I’ve got a little strategy on how to buy on sale and apply coupons. See my post on How to Buy & Prep a Tenderloin for more information. Make sure to look at it if you’re thinking about buying a beef tenderloin for Christmas or New Years, too.

Melt 1/2 tablespoon butter in heavy large ovenproof skillet over medium-high heat. Sprinkle pork with salt and pepper. Sear pork on all sides. Transfer to an oven-proof plate or dish and roast until a thermometer inserted into the center registers 155 to 160 degrees F, about 15 to 20 minutes.

Meanwhile, melt remaining 1 tablespoon butter in the skillet over medium-high heat. Add onion and rosemary; sauté until onion softens and begins to pick up color, about 10 to 15 minutes. Add broth, cranberry sauce and vinegar and whisk until cranberry sauce melts, about 2 minutes. Bring to a boil and cook until the sauce has reduced enough to coat the spoon thickly, about 6 minutes. Season with salt and lots of pepper.

When pork is finished, transfer pork to work surface. Scrape any juices from baking pan as well as any juices given off by the resting tenderloin to the cranberry mixture. Slice pork and serve with sauce.