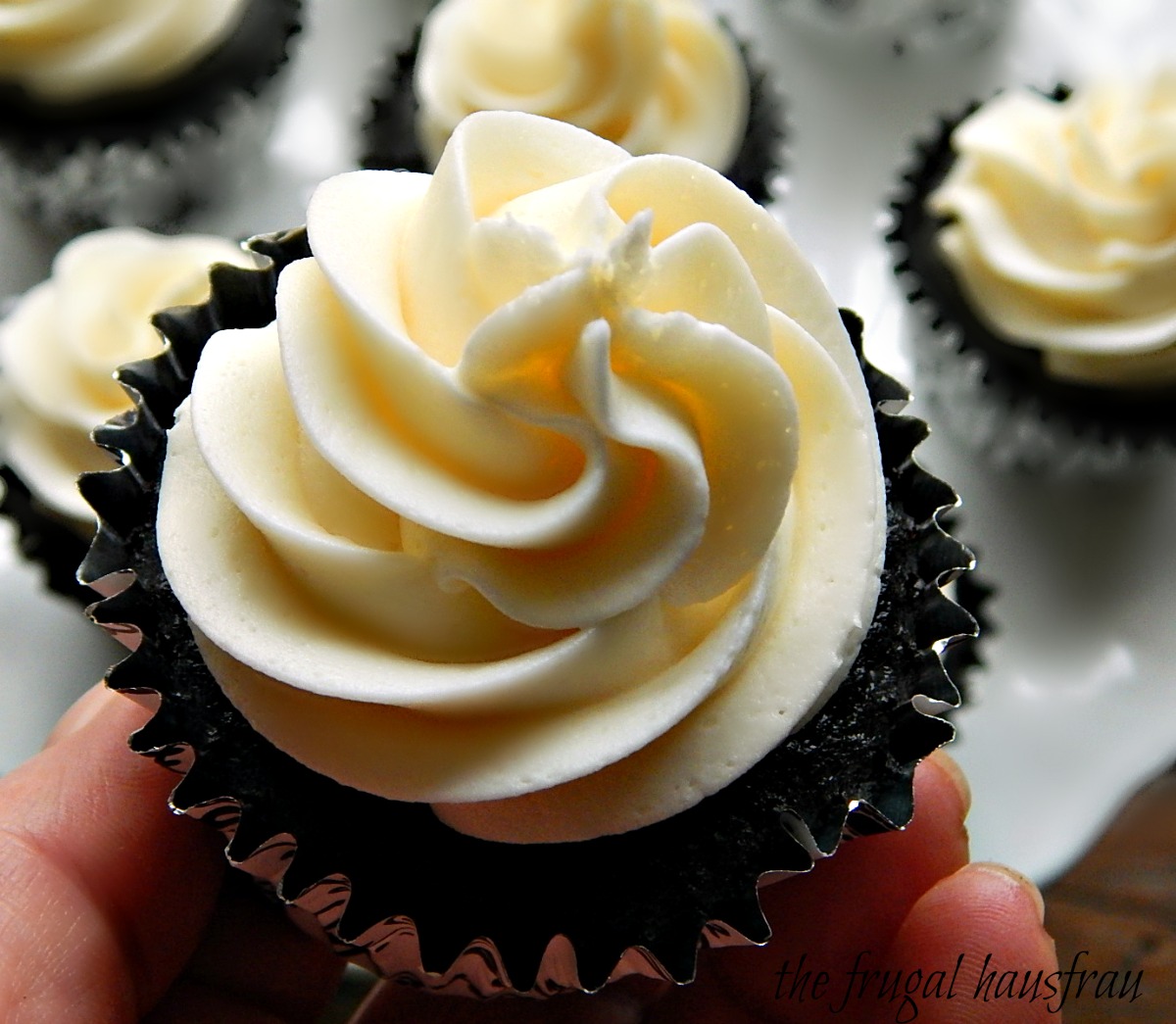 If you saw my Best Chocolate Cupcakes the other day, you probably got a peek at this Vanilla Buttercream. It’s gorgeous, isn’t it? And you may have scrolled down the page until you saw my “Pinterest Fail” using the same buttercream recipe. *Sighs*

American Buttercream as it’s called, is one of the simplest frostings you can make, but I thought I’d post both pictures of both my success and a fail so you could see the good points of this frosting along with the bad. And that frosting I tried to make cute little ghosties with was so, so bad!

American Buttercream is fast, easy, inexpensive (and safe) and can be spectacular and versatile – it goes so well with any chocolate as well as fruit flavors – think how this would be on strawberry. And while not absolutely traditional, think about topping something Red Velvet with this frosting.

I had a bit of a Pinterest fail when I couldn’t get the frosting right for the cute little ghosties – but I think I recreated Donald Trump!

On the downside, American Buttercream can be cloying, but there’s a little trick for that. Instead of using milk in this frosting, use cream. It rounds out the flavor and enriches the frosting – and while we’re not talking about a lot of cream, trust me, this makes a difference.

Let’s talk about the real possible pitfall of this frosting. Temperature. Because this is an all butter buttercream it’s going to be finicky and vulnerable to the same temperature changes as the butter in it. If your butter is too hot or too cold, while making the frosting or serving it, there’s a big possibility of a “fail.”

Mine was too cold when I frosted the ghosties. And I was a bit out of practice with this frosting. That’s because I’ve been using my blogging buddy, Carlee’s White Chocolate Frosting in almost everything for the last few months! So I thought I nailed it, but obviously not, lol!

For best results with a buttercream, you’ll want to have your butter at the cool side of room temperature, which by definition is 68 to 72 degrees F. The closer to 68, the better. The butter should hold its shape when bent without cracking or collapsing.

I like to put my butter out the evening before and I don’t always put it in the kitchen. In the summer, I know my lower level is just a bit cooler and in the winter, when I turn my thermostat down at night, I’ll put the butter on my gas stove with a bowl over it, to catch just a bit of that heat from the pilot light.

When the butter is beaten, which is always the first step of the recipe, make sure that it is beaten enough to lighten in color and increase a bit in volume. That’s when you know it’s just right. This process actually warms the butter up a bit. Then you’ll add the sugar in stages so it mixes well. If the sugar is a bit clumpy, you’ll want to measure and then sift unless a recipe specifies otherwise.

As far as the powdered or confectioner’s sugar – just like flour, it can be a bit drier in the winter; you’ll need to adjust the amount of cream in the recipe to smooth out that buttercream and get it to the perfect consistency.

That’s a judgement call – you may need less or more than a recipe calls for, but when your spatula runs through the buttercream, it should be smooth and fluffy, but leave a bit of a trail that’s distinct just like you’ll see it when you pipe. Buttercream will also thicken up just a bit as it sits – unless it’s too warm. If you go too far, you can add a touch more powdered sugar.

When deciding to use this frosting, think about things like where you’ll be serving it and how it’s being transported. This isn’t the frosting to have on a cake or cupcakes that are sitting out on a table on a hot summer day or tossed in the back of a car with the sun beating down. Using half butter and half shortening will help keep the buttercream a bit more stable and a lot of bakeries use all shortening.

Also be aware if the temperature is too cold, the buttercream will stiffen and harden just as butter will. If refrigerated, you’ll want to bring back to room temperature.

So let’s recap the steps for a successful American Buttercream:

Cut butter into chunks. Using the whip attachment, whip butter several minutes, scraping down occasionally, until butter has increased in volume and lightened in color.

Add half of the powdered sugar and mix on low-speed until incorporated, again stopping to scrape down. Add the vanilla extract and mix to combine.

Add the rest of the powdered sugar and beat on low-speed until sugar is incorporated, again stopping to scrape down as needed. Increase speed to medium-high and beat for 2 to 3 minutes.

Turn back to low and add the heavy cream by the tablespoon, starting with a tablespoon or two, then adding more if needed. Turn mixer up to medium high and whip until light.