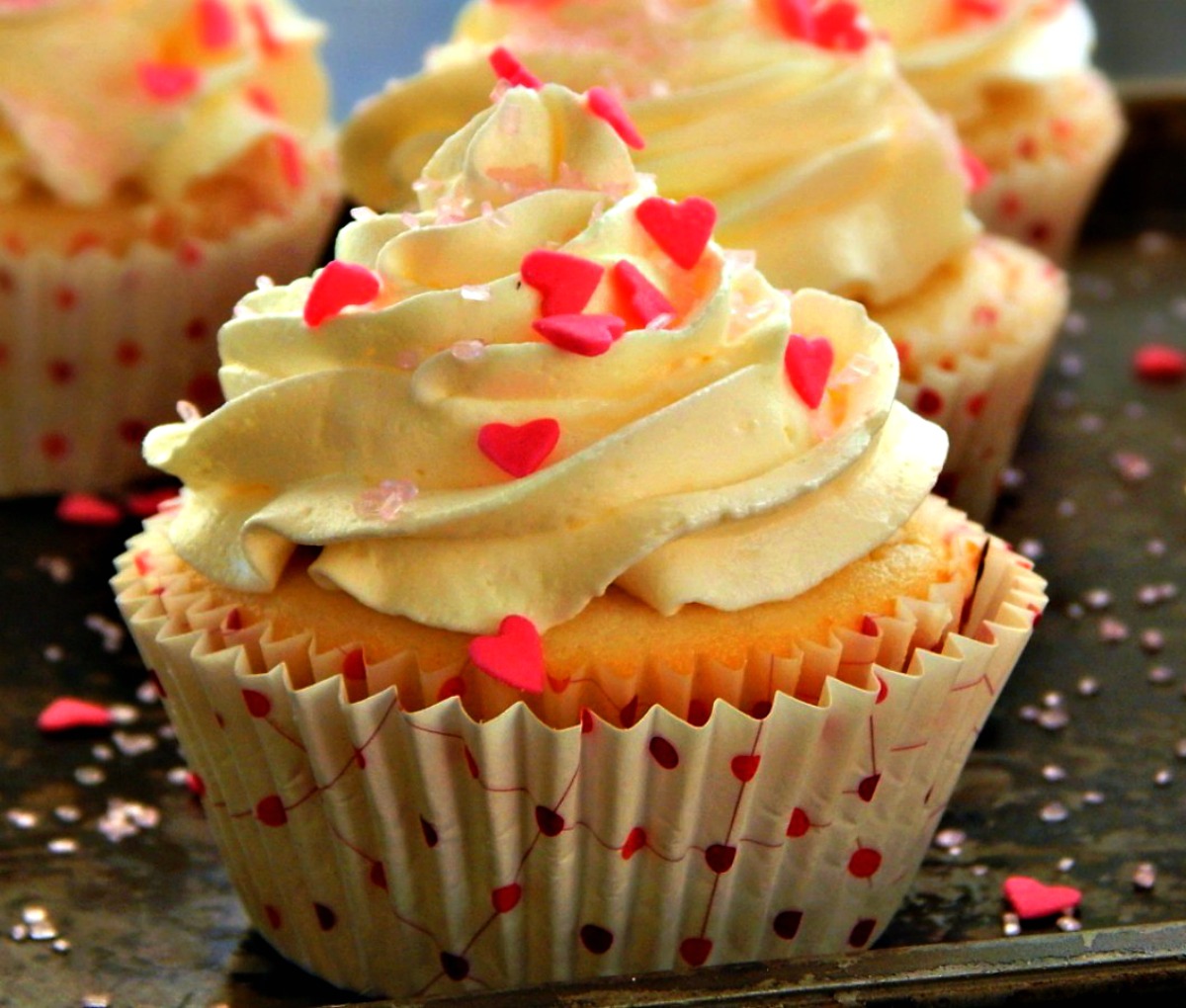 Happy Valentine’s Day! Valentine’s Day is often thought of as the day we celebrate our sweetheart. Flowers, chocolate, cards, and cupcakes are all appropriate. Yeah, see how I worked that Cupcake in? Slick, huh? In my defense, these are Raspberry Filled Cupcakes with White Chocolate Buttercream. It’s not to be missed.

I thought Raspberry Filled Cupcakes with White Chocolate Buttercream would be the perfect thing for Valentine’s day. St. Valentine is the patron saint of love, young people and happy marriages, and I think you’ll agree that these cupcakes are a happy marriage of the delicious filled cupcake and white chocolate buttercream. You might say they’re a match made in heaven!

Usually, I talk about how delicious whatever my food I’m making is, and these Raspberry Filled Cupcakes with White Chocolate Buttercream are deserving of a bit of raving, but I have an agenda, today. See, poor St. Valentine has had a tough time of it – while it’s certain he existed, there may have been more than one Valentine. And so the Church doesn’t recognize Valentine’s day as an official holiday, but what is lost is in all the happy sentiment is the deeper meaning behind Valentine’s day.

Valentine felt strongly about his freedom & his religion; he defied the law of the time and secretly conducted weddings. He stood up for what he believed and it cost him his life. Today, many are afraid of speaking up in these uncertain times. While we might not be in danger of losing our lives, there are accusations of being whiners and of spreading “hatred” and worse. I’ve especially been afraid to speak up on Facebook & my blog. Honestly, I enjoy all of you who come here and have been hesitant of offending. And I wonder who wants a cupcake with a side of lecture…probably no one!

But disagreement, discussion and discord is not “hatred.” Like St. Valentine, we can look for love where we can, celebrate love as we find it, but never waver on the deeper issues, as uncomfortable as it might be for us. Most of us have a moral compass that alerts us to what’s right and what’s wrong, no matter what our political beliefs – let’s not be afraid to use it.

In the meantime, have a cupcake. They’re wonderful. I wish I could have given one to that poor boy who was separated from everyone he knew and held in handcuffs in the airport last week. I wish I could give one to Abi and her two young children held at Dulles for 20 hours without food. “They cried a lot,” their cousin said. And I cried with them. They’re from Wilmar, Minnesota, a town of about 20,000 smack dab in the Midwest. I never want to forget that day…and so I post it here.

But back to the cupcakes. They’re marvelous & I hope you enjoy them as much as we did. I know many, probably most of you, know you’re sharing your love as you cook and bake for your family. Let’s always stop and give a thought to those outside of our own circle who need your love and caring, too. Even if it’s difficult. Even if it’s uncomfortable. Even if all you can do is take a minute and speak out for what’s right & wrong.

These gorgeous white cupcakes are only very slightly adapted from Sally’s Baking Addiction. I love that site and often refer to her when baking. Do check her post which has a lot more information on these cupcakes, making them, storing them and the process. The instructions in my recipe below are changed up just a bit to work with my raspberry jam filling.

I’m referring you to my buddy, Carlee from Cooking with Carlee for her White Chocolate Buttercream. I just love the combo of white chocolate and raspberry, don’t you? If so, you’re going to love this White Chocolate Buttercream on these cupcakes. Note that in order for the frosting to be thick enough to pipe, I just dribbled in the cream until the frosting smoothed out rather than using the full amount Carlee calls for in her recipe. Make sure to use a white chocolate bar, not white chocolate chips which might not melt completely and may leave little nubbins of chocolate that will clog your piping tip.

There is no doubt the filling part is fussy but oh so worth it. I lucked out and found that an apple corer helped a lot. Just carefully push it in, then use something to push the removed cupcake from the corer. Any small, hollow cylindrical shaped object should work. Leave a little space when you add in the jam and put a bit of the removed cupcake over; it will keep the jam from spreading over the top of the cupcake and/or bleeding into the frosting after you pipe it on.

Saving Money on this Recipe:

Buy any baking goods on sale and the best sales are around holidays where baking is a “thing.” The winter holidays are a great time to buy as is the Easter/Lent season, although there are great sales on some items around Valentine’s day. Especially chocolate and white chocolate. Learn to stock up during sales and buy enough to last until the next anticipated sale. Aldi will have great deals on baking items, the best prices on butter and they have a great “white chocolate” bar.

Cream is always at a fabulous price at Aldi, too. and might be at a decent price during holiday sales. It has a long shelf life, so buy ahead of when you need it, while it’s on sale.

Preheat the oven to 375°F. Line muffin tins with cupcake liners. Line a second pan with 3 liners – this recipe makes about 15 cupcakes. Set aside.

Whisk the cake flour, baking powder, baking soda, and salt together. Set aside.

Using a handheld or stand mixer fitted with a paddle attachment, beat the butter on high speed until smooth and creamy – about 1 minute. Add the sugar and beat on high speed for 2 minutes until creamed together. Scrape down the sides and up the bottom of the bowl with a rubber spatula as needed.

Add the egg whites, vanilla extract, and vanilla bean. Beat on medium-high speed until combined, then beat in the sour cream. Scrape down the sides and up the bottom of the bowl as needed.

With the mixer on low speed, add the dry ingredients until just incorporated. With the mixer still running on low, slowly pour in the milk until combined. Do not overmix. You may need to whisk it all by hand to make sure there are no lumps at the bottom of the bowl. The batter will be slightly thick.

Pour/spoon the batter into the liners – fill only 2/3 full to avoid spilling over the sides. Bake for 18 to 19 minutes, rotating pans once, or until a toothpick inserted in the center comes out clean.

Allow the cupcakes to cool completely before filling & frosting.

Note: To substitute regular flour for the cake flour, when measuring, place 3 tablespoons cornstarch in the bottom of your 1 cup measuring cup. Fill the remainder of the cup with regular flour and level off. Measure the 3/4 cup of flour as normal.

To fill, remove a small portion from the center of the cupcakes, saving the pieces. Fill with about 1/2 to 1 teaspoon jam, leaving a slight space at the top. Replace with a portion of the removed piece.

Use the recipe from Cooking with Carlee. The original recipe calls for 1/4 cup of cream, but in order to make the Buttercream thick enough to stand up to piping, I shorted the amount and use 1 to 3 tablespoons. Just dribbled a little in by the tablespoon until the frosting smooths out. You’ll see it happen and it will be unmistakable. The amount of cream can vary depending on the humidity and how dry the powdered sugar is as well as slight variances in the white chocolate.

Make sure to pipe at a lower room temperature; this frosting will be finicky if the temperature is warm. Most of all, follow Carlee’s instructions to not use chips, which may not melt completely smoothly, causing your piping tip to repeatedly clog.

I’ll be sharing Raspberry Filled Cupcakes with White Chocolate Buttercream at Fiesta Friday, co-hosted this week by Ai @ Ai Made It For You and Petra @ Food Eat Love. Stopover, visit their blogs – I know there are a lot of special dishes this week!