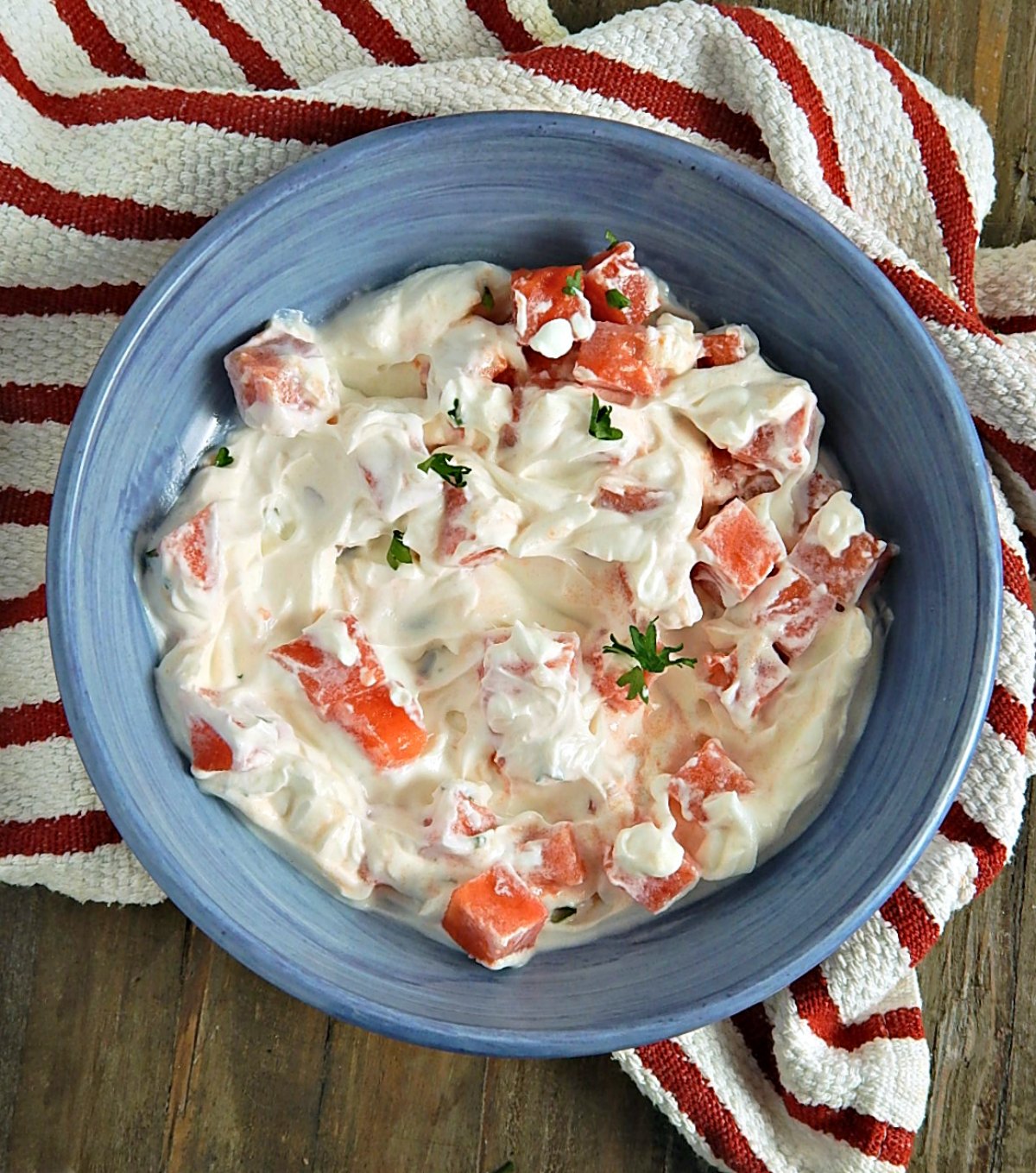 I first became aware of Watermelon Yogurt Salad from the commercials of one of those Greek Yogurts. The idea didn’t really appeal to me much. That was until at my folk’s house, my StepSister stepped in and mixed a quick one up from a bit of watermelon we had languishing in the fridge.

At it’s most basic, this “salad” is just cubed up watermelon served up with some good Greek yogurt. Serve the watermelon perched on top or mix it in, it doesn’t matter. But if you want to up your game a bit, all kinds of things can be added.

A drizzle of honey in the yogurt is nice and I like to finish the salad off with a few herbs. And when I say a few, I mean a few. Like 1/4 teaspoon of chopped fresh basil and the same amount of parsley, The herbs can really hijack the flavor. A dash of salt (and this is where you pull out your good sea salt) makes everything just sparkle.

If you want to lean still more to the savory side, the yogurt can be turned into a dressing with a little olive oil, vinegar, the zest of a lime or lemon and a lot of black pepper and/or your favorite herbs and the watermelon can be jazzed up by a heavier hand with the herbs. And more assertive herbs can be added, rosemary, a pinch of red pepper flakes, a little oregano or marjoram. The tweaks that can be made are almost endless.

There really is nothing to making this salad. Its just a toss together thing. It is a salad you won’t want to make too much ahead of time, though, because the watermelon can and will continue to give off juices. It still tastes delish, but the yogurt will thin out. The watermelon can be tossed in a strainer to drain off some of the juiciness before making the salad if you want.

As far as the recipe, lol, cut up watermelon. Add some yogurt. Serve! You don’t get simpler than that. Then go a little fancier if you want. I would highly suggest a large flake sea salt, though, to finish. It’s so much fun to get that little spark here and there as you’re eating the Watermelon Yogurt Salad.

If you make too much Watermelon Yogurt Salad, it can get a little runny, just like my other favorite yogurt-based fruit salad, Lemon Poppyseed Fruit Salad. Drain and refresh with a bit more yogurt or toss it in a blender for smoothies.

Watermelon is usually feast or famine at my house. I know you can buy the precut watermelon, but it’s never as good and extremely pricey for what you get, usually, 4 to 10 times as much if the $ per pound is worked out. And that’s even including the weight difference due to the rind. Smaller watermelons are at the store, but it’s still a lot for me to use up. I do have a few tricks up my sleeve (like juicing some for a cocktail, but that will have to wait until summer when the melons are cheap and good!)

When you buy a watermelon, look for them on sale during the peak of the season and pick one that seems heavy for its size. That’s more important than color or minor blemishes. Turn the melon over. The blotch on the bottom (where the watermelon rested on the ground) should be creamy colored not an anemic white. Give it a thump. The watermelon should sound hollow. You can hone your skills by comparing the sound of the watermelon you’ve picked with several others especially if you’ve spotted one with a white splotch. When you cut watermelon, use a clean knife and a clean counter or board and it will last longer in the fridge. A large rubber band will easily hold any plastic wrap in place.

A lot of fugal people make their own yogurt and it’s not that hard. It’s one of those things that just becomes habit, I guess. I make it now and then and always use my daughter’s Simply the Best Yogurt, Ever recipe. When comparing like quality, the homemade yogurt is a bargain. Other than making your yogurt, watch for sales pricing. Yogurt keeks for weeks past the “Buy by” date. Also be open to new brands and be open to buying at Costco or Aldi. I’ve found good Greek yogurt at Costco runs about the same price as my grocery store but is a much larger container.

Mix yogurt with honey if desired. Place in serving bowl. Top with watermelon, sprinkle with herbs and sea salt. Mix when ready to serve.