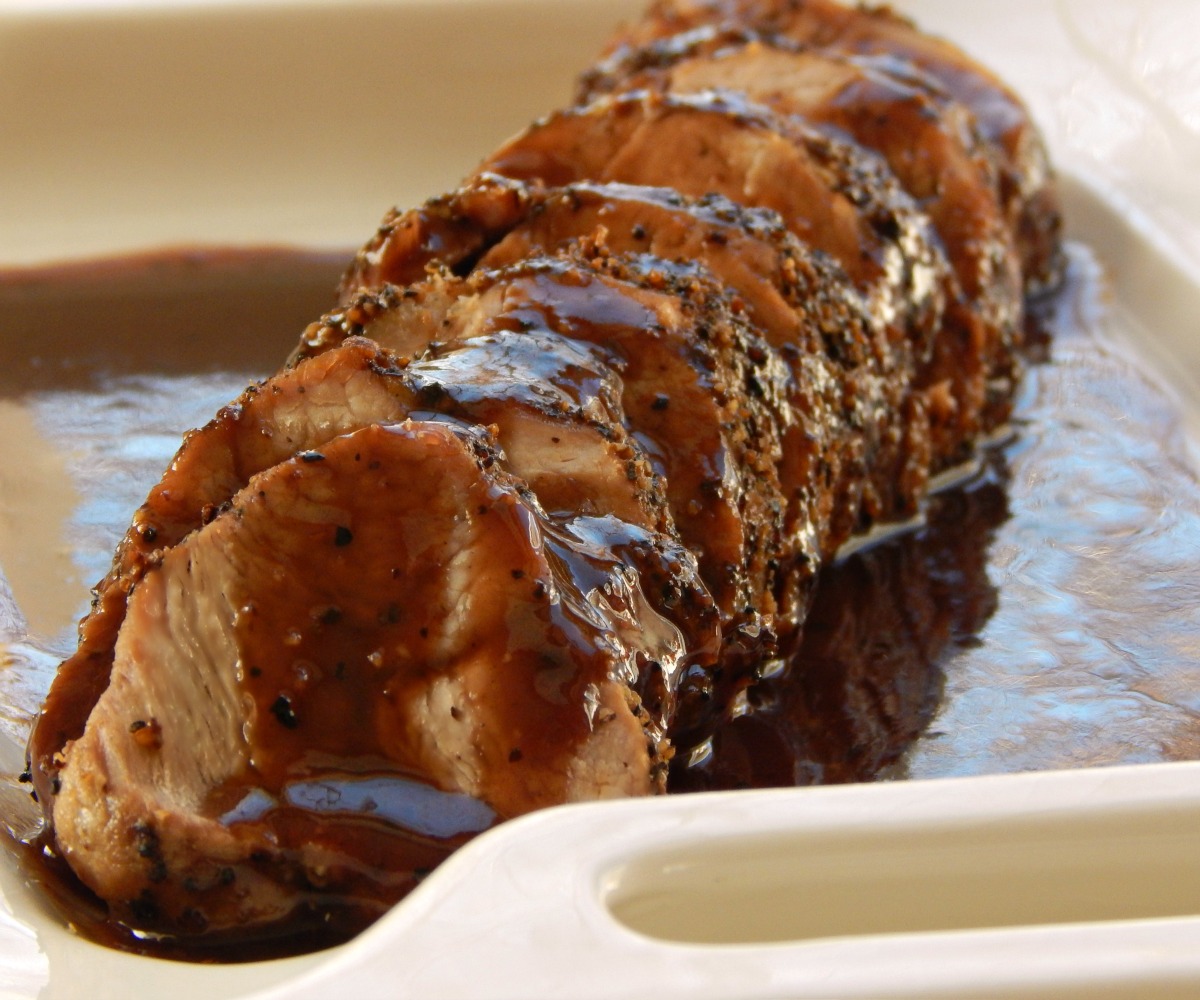 Everyone needs an easy and elegant option for a special occasion dinner – this gorgeous Pork Tenderloin with a peppery crust and simple pan sauce is one of the most requested for birthdays and celebrations at our house. My recipe for Pork Tenderloin with Sauce Poivrade is just the thing when you have company, too, and it’s easy enough to knock out on a weekday.

Pork Tenderloin with Sauce Poivrade is adapted from a much longer and complicated recipe for Pork Chops from Thomas Keller of the famed French Laundry. This is one of those recipes that’s going to taste like you spent all day in the kitchen but can easily be done in 30 to 35 minutes or so. Ya gotta love that! And of course, I included Thomas Keller’s more complicated sauce in the notes, too, just in case you want to go there…

About Pork Tenderloin with Sauce Poivrade:

I think my Pork Tenderloin with Sauce Poivrade is proof that everything “tastes” better in French! While pork tenderloin is always tender and juicy, it has a mild flavor. That means it’s just about the perfect foil for any type of flavor you might want to add. The simple rub of salt & freshly cracked black pepper is amazing on the pork tenderloin, but what really takes it over the top is the “Sauce Poivrade.”

The Sauce Poivrade sounds almost too simple to be true, but it’s a rich, velvety sauce just full of classic flavors. Heck, a quick glance at the ingredients might have you wondering, but ya gotta trust Thomas Keller. I hafta say I wondered myself when I saw red wine vinegar and jam and then when I got to the cornstarch I was a bit taken aback. I think I have an idea that anything with cornstarch is going to be like a cheap diner gravy but in the hands of a master chef (that’s you, now, and me, too, when you make this, lol) it works beautifully.

When you serve Pork Tenderloin with Sauce Poivrade you can go with a classic pairing of a good mashed potato and a green veggie like my Simple Steamed Broccoli or Brussels Spouts (I love my Bacon Brussels Sprouts with this dinner). If you want to get a little fancier and serve something a bit different, try my rich, silky Pureed Parsnips. The parsnips have a sharper flavor that plays off the pepper in the Pork Tenderloin with Sauce Poivrade. Cauliflower does the same thing, so if you want a healthier option, try my Parmesan Cauliflower Mash or Instant Pot Cauliflower Rice. And hey, you won’t go wrong with a wild rice mix, either if you’d like to go that route.

The recipe for Pork Tenderloin with Sauce Poivrade is pretty straightforward. The only piece of advice I can think of is to use a meat thermometer to get your pork to just the temperature you’d like. It’s safe to cook pork from a rarer 145 degrees on up to 160.

Oh, and do use freshly cracked black peppercorns for this recipe. If you use powdered pepper you won’t have the same results, but just fyi, if you’re really in a pinch, you need a fraction of the amount of powdered as freshly cracked.

Now for the more complicated sauce as Chef Thomas Keller makes it just in case you want it. My simpler stream-lined sauce is in my printable full recipe, below, but there is no doubt this is absolutely outstanding although makes this recipe more of a project & expense:

Use about a pound and a half of riblets (from the butcher or save your bones when you trim ribs or pork chops), roast until brown (a cast iron skillet is great for this) at 425 degrees.

Remove and simmer with 2/3rds cup of water, scraping up drippings and stirring to extract as much from the bones as possible, simmering until water is nearly gone. Do two more reductions.

Continue with the rest of the recipe, at adding in the black pepper and so on.

In the past, we often went out for special dinners, but it’s become harder to justify when you can put a delicious, restaurant-quality dinner on the table for less than the cost of one plate when eating out. This complete dinner for four (if you’ve shopped well) is about the same cost as the premium meals (burger, fries, drink) at McDonald’s.

Pair Pork Tenderloin with Sauce Poivrade with lots of budget sides for a reasonably priced meal. Leftovers, if any, can be thinly sliced and made into sandwiches, especially if that sandwich is something like a Cubano that relies on things other than just a few slices of tenderloin for heft. Eaking a second meal out of a first, more expensive one is one of my strategies to stay in budget, although tenderloins, to be honest, are not huge and at our house, with this meal, nonexistent!

While pork tenderloin isn’t “cheap” it’s an elegant and delicious cut for far less than many of the “fancier” options. If you’d like some hints on bringing Pork Tenderloin home at a budget price or want a review on how to “prep” a pork tenderloin, take a peek on how to Buy and Prepare a Tenderloin for cooking; that post covers both pork and beef tenderloin.

Beware of producers selling pork loin cut down to a tenderloin size and passing it off as tenderloin. Usually, size is a dead give-away (they’re generally larger than an actual pork tenderloin) and somewhere on the label you’ll see the words “tender loin” instead of the single word, “tenderloin.”

Rub tenderloin with salt and freshly cracked black pepper and sear in hot pan with olive oil. When browned on all sides, remove to a small ovenproof dish (set the pan aside off the heat for the sauce) and roast tenderloin until a thermometer reaches 145 (pink in the middle) to 160 degrees in the thickest part, about 25 minutes or so for pork cooked as shown in the photos. Remove and tent with foil for 10 minutes.

After the tenderloin is in the oven for about 15 minutes, in the pan you seared the tenderloin in, add 2 cups of chicken broth, the jelly, and the red wine vinegar. Bring to a boil and reduce to about one cup. Taste, stir in cracked pepper as desired. (If serving children, keep the heat level in mind when you add that pepper.) Stir in the cornstarch mixture and simmer a few minutes to thicken. Taste and add salt if desired. Keep warm.

Slice tenderloin thinly on the diagonal. Mix any accumulated juices into the sauce. When serving, serve three to four slices per person, drizzle a bit of sauce over each portion and pass the rest of the sauce.

Notes: The best results will come from using a home-made or really good quality chicken stock and the currant jelly, which is not as sweet as most jams/jellys. Substitutions can be made, but try to stay with a good quality dark jelly or the sauce will be overly sweet.

Tonight, I’ll be linking Pork Tenderloin with Sauce Poivrade up to Throwback Thursday, of which I am now (Yay!) a cohost! Stop over and see all the great recipes and party ideas and check out the other co-hosts, too: Quinn of Dad What’s for Dinner & Alli of Tornadough who started it all and Meaghan from 4 Sons are Us. See ya there!

I’m also dropping by to Angie’s Fiesta Friday! I’ve already seen some of the great recipes featured there this week! Wow! Thank you, Angie, for putting on this extravaganza! She’s been hosting for 93 consecutive weeks! Helping her out this week are Jhuls @ The Not So Creative Cook and Kaila @ GF LIfe 24/7.

I’ll bring this by to Freedom Fridays, too, hosted by Love Bakes Good Cake (that’s so true, isn’t it?) She’s teamed up with My Turn for us and With a Blast to bring you the best “no rules” party around!

I’ll also be linking to Saucy Saturdays No 19 – a food and craft link party!!