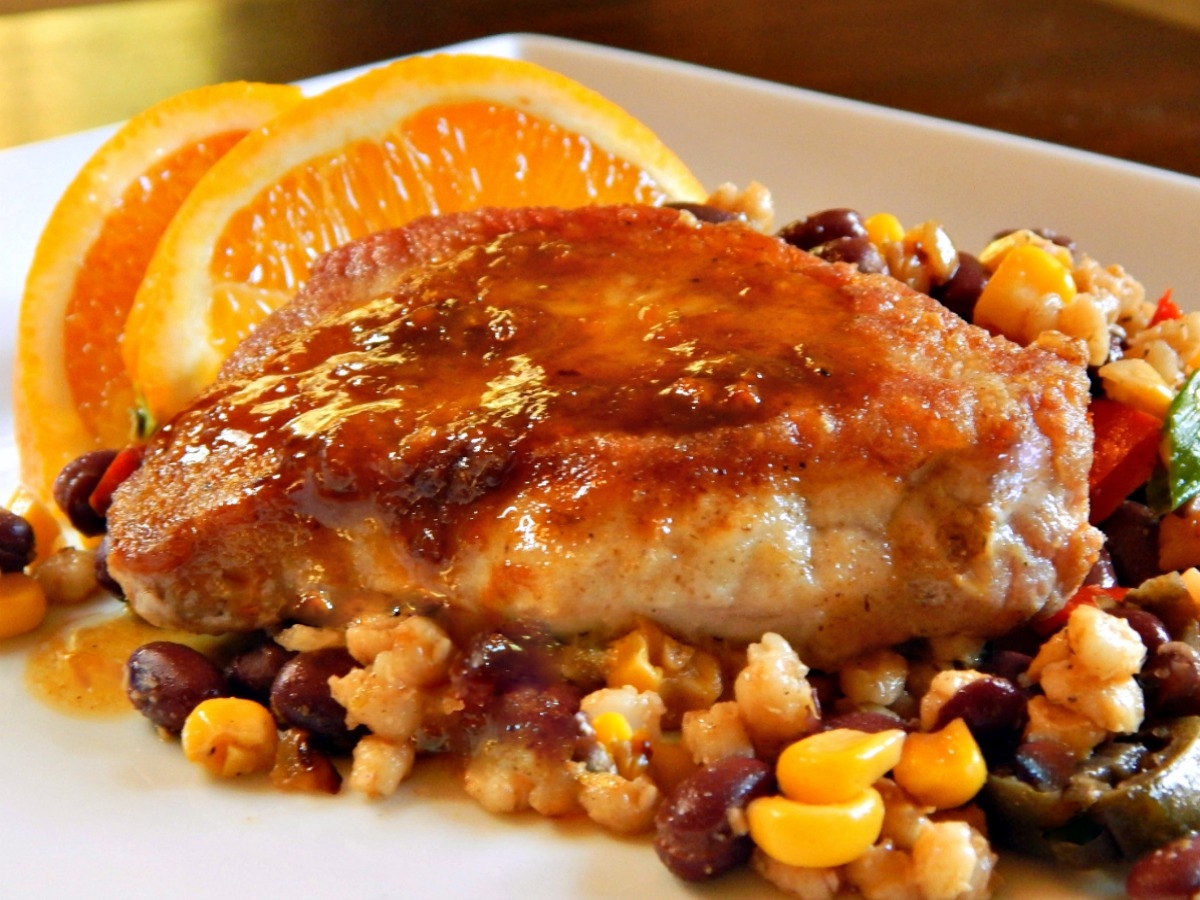 You can have a plain old pork chop any day of the week, but why, when in a few minutes more you can pull off this gorgeous little dish and look like a hero? Cumin Dusted Pork Chops with Citrus Glaze are beautifully cooked pork chops served up in a garlicky, citrusy glaze tempered by the earthy cumin. The flavors in that glaze just pop.

Cumin Dusted Pork Chops with Citrus Glaze is so good, you’ll seriously want to lick your plate and so simple it will feel like a cheat.

This is a recipe from my Stepmom, clipped and filed in one of her books. She had several of them, all chock full of recipes. When it came time to make dinner, Pat was so funny. I took the books down out of the high cabinet and once she got the right one, she opened it up to the page and pointed to this recipe and that was that. To this day I’m not sure if that was just a random point or if she meant to pick this recipe, but I’m glad she picked this one!

Cumin Dusted Pork Chops with Citrus Glaze originally came from Bon Appetit, which is kind of funny because I have gotten that magazine for years (read: decades) and must have overlooked it. It’s a shame because it is truly a gem and I could have been making it all along! I adapted it a bit, changing out the orange for a combo of citrus and adding in a little zest to up the flavor ante – but if all you have on hand is an orange, no worries. It’s still a great dish. I also cut back on the cumin just a hair – it can easily overwhelm and a little less lets the garlicky citrus flavors come forward.

The original recipe suggested serving with a black bean/rice salad from the deli – I like to serve it with a black bean, barley, corn, and pepper saute that I made up to mimic a “Protein Blend” I saw in the frozen food aisle. I call it Southwestern Protein Mix and it’s super delish. I make it with barley but quinoa or any other grain will work, too.

The Cumin Dusted Pork Chops with Citrus Glaze really are like a cheat to make. They’re so fast. Maybe 10 minutes. Just saute the pork chops till their done to perfection and while that’s happening, zest and juice your citrus. When the pork chops are done, add a bit more oil to the skillet (oil carries flavor) and reduce all that citrusy goodness down to a glaze. It’s a beautiful thing!

If you don’t happen to have all three types of citrus, use one or the other or whatever combo you do have. No stress, no worry, it’s going to be gorgeous anyway!

Honestly, usually, I have a lot more to say about cooking a recipe but this one is so simple there’s just nothing more to say! Maybe don’t overcook your pork? And to tell the truth, I was a little tempted to add a drizzle of tequila to the sauce. I can’t help but think that would be delish!

If you’d like to get your chops on the cheap, buy a pork loin and slice it into chops just how you like them. Package & freeze in sizes that make sense for your family. Pork loins are large but go on sale for a pittance, especially in the fall. I like to go with some thick like a double cut pork chop and some thinner so when I decide to make dinner I have options to choose from.

When choosing citrus, along as it’s fresh, don’t let the color sway you, especially when choosing limes. Weigh several fruits in your hand and choose the heaviest for the size. They’ll be the juiciest. To get more juice, especially if the citrus is hard, microwave for a few seconds, then roll on the counter first.

Mix flour, cumin, salt and pepper on a shallow plate. Coat pork in the seasoned flour, shaking off excess.

Heat 1 tablespoon oil in large nonstick skillet over medium-high heat. Add pork; sauté until cooked through and nicely browned, about 3 minutes per side. Transfer to a clean plate.

From the kitchen of http://www.frugalhausfrau.com, adapted from Bon Appetit

Tonight, I’ll be linking up to Throwback Thursday, of which I am now (Yay!) a cohost! Stop over and see all the great recipes and party ideas and check out the other co-hosts, too: Quinn of Dad Whats for Dinner & Alli of Tornadough who started it all and Meaghan from 4 Sons are Us. See ya there!

I’m also dropping by to Angie’s Fiesta Friday! I’ve already seen some of the great recipes featured there this week! Wow! Thank you, Angie, for putting on this extravaganza! She’s been hosting for 93 consecutive weeks! Helping her out this week are Jhuls @ The Not So Creative Cook and Kaila @ GF LIfe 24/7.

I’ll bring this by to Freedom Fridays, too, hosted by Love Bakes Good Cake (that’s so true, isn’t it?) She’s teamed up with My Turn for us and With a Blast to bring you the best “no rules” party around!

I’ll also be linking to Saucy Saturdays No 19 – a food and craft link party!!