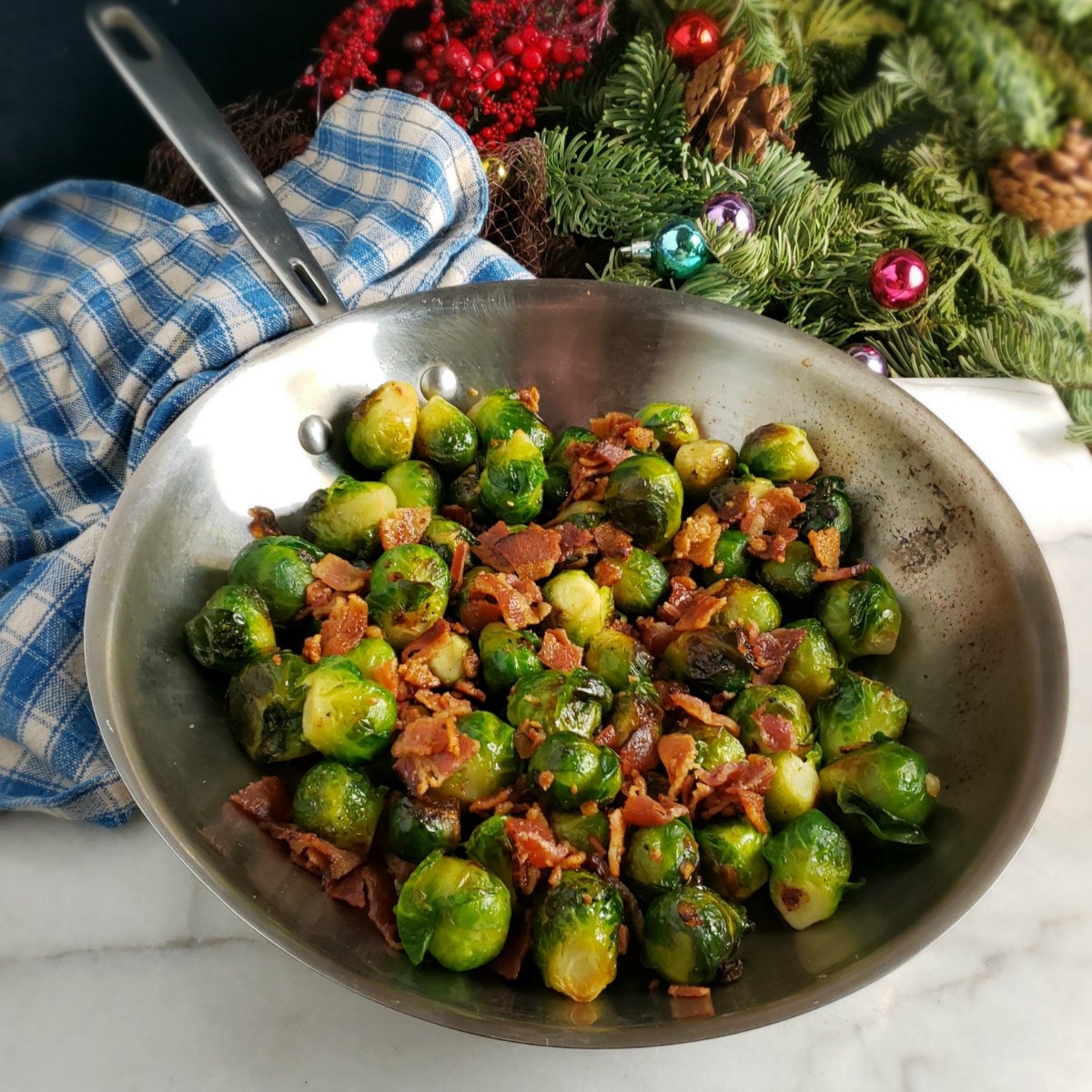 Bacon Brussels Sprouts! I love Brussels Sprouts but I gotta admit when I first heard of cooking them with bacon I was…a little aghast! I really had a hard time wrapping my mind around it. My first thought was why mess up a perfectly good vegetable with bacon? Well, the answer is of course, if you’ve had them, that they’re just so danged good!

Now, I still cook/steam Brussels plain with butter, and I still love them that way, but those Bacon Brussels Sprouts? They turned out to be like a gateway drug. They were among my first “fancy” Brussels, but I haven’t stopped there. I’ll show you a few more of my absolutely addictive Brussels, below. After we talk about this recipe, of course!

These days there are all kinds of recipes for Bacon Brussels Sprouts, but if I do say so myself (and since this is my site, I can, lol) this recipe is really the best I’ve ever made. It rocks. See there’s one little trick that works so beautifully. The Brussels are par cooked, just cooked enough really to soften them up just a bit. That helps them accept all that flavor from the bacon and helps them cook and brown up. And as we all know, you can’t go wrong with Golden Brown & Delicious! GBD!

And that cooking method is a great no effort way to get professional-looking results. You’re gonna think you’re at a high-end restaurant. As a matter of fact, one of my fave meals to serve Bacon Brussels Sprouts with is a special one: my fave Valentine’s Day Dinner, my Beef Medallions in a Red Wine Reduction. Of course, you don’t have to go so fancy with your Bacon Brussels Sprouts. They’re like a perfect pair of jeans and go with just about anything from down-home casual to chi chi.

What makes this recipe turn out so well and makes it so easy to make without a whole lot of “tending” is cooking the Brussels Sprouts first in water or if you want more flavor, Chicken Stock. Just be careful to only cook them until they’re crispy/tender because they’ll cook more in the bacon drippings. And once they go in the bacon drippings they hardly take any time to brown up thanks to that first cook.

While the Brussels are simmering away cook the bacon. Starting out with just a little water is the best way to render out the fat and make the little lardons of bacon super crispy. You can use any bacon but if you want this to be as special as possible, here’s where you might want to splurge on a good, thick cut bacon. I usually just slice across the whole package to get the needed amount and with regular bacon 1/16th equals a slice. Thick cut varies, but is usually about 11 slices to a pound if you buy it at the store, so about a 1/11th of the package equals a slice. Easy peasy!

Once the Brussels are drained, remove the rendered bacon and set it aside (do try not to nibble away on it, lol) and then toss those Brussels in the pan along with the finely diced onion and garlic. Just make sure the cut side of the Brussels makes some contact with the pan, but you’ll need to toss those Brussels, gently, several times. Add the bacon back in, a little salt & pepper if you want and you’re good to go.

If you want to take these over the top, it’s not in the recipe, but any hard grating cheese, Parmesan or Romano, maybe Asiago (it’s assertive) can be grated over the top. Just sayin’!

What to Know About Brussels Sprouts – don’t waste the leaves, toss in salads or your smoothies

Some of my other Favorite Brussels Sprouts Recipes:

I mentioned it, so I want to highlight a few other faves and as you can see, I love love love me some Brussels Sprouts! I’m thinking if you’re here you might feel the same way!:

There’s my newest BS recipe, which is so rich it really is more of an appetizer than a side, Roasted Balsamic Brussels Sprouts. They’re insane! Another nibble is these Zesty Pickled Brussels – trust me on these coz I know, I know, they sound a bit odd but they’re positively addictive.

Another fab recipe can be an appetizer or a side, Restaurant Style Brussels, and they have a lemony, butter caper sauce. One of my fave of all recipes on my site is Cream Braised Brussels. They’re cooked OG, nice and soft and they end up being glazed with the cream. They’re so homely and so good! It’s a tough decision though between those and these Brussels with a Parmesan Frico – the Parmesan Cheese coats the Brussels then melts and onto the pan making kind of like a little skirt of chewy, crunchy cheese. Ya just gotta try ’em! Getting back to the healthier side, a Brussels Sprout recipe fit for the Holidays has got to be Roasted Brussels Sprouts with Pomegranates and Walnuts Those jewel colors just scream Christmas!

If you watch Food Network you might know Chef Michael Chiarello. His Fennel Spice Rub takes these Brussels Sprouts next level. And yes, I do have a Shaved Brussels Sprout Salad. It’s outstanding with Feta, Berries, and Almonds. Oh and there’s a second, my Shaved Brussels and Kale Salad. A little chicken makes that a main dish. That just leaves (but I’m always adding so be sure to click the link “Brussels Sprouts” at the bottom of the page) my Roasted Sweet Potatoes & Brussels Sprouts. The White Balsamic Vinaigrette drizzled over takes them to the next level!

Bacon, before it’s recent popularity used to be dirt cheap but no longer. Usually bacon will be on sale right before any holiday so watch for specials. Since it takes so little room, it’s an ideal freezer item. When pieces are needed for a recipe, slice through the bacon (I slice right through the package and all) the short way.

Brussels Sprouts have gone down in price since they’ve become so popular. They’re seasonal in the fall but available all year round these days. Some of the best pricing, though, is during the winter holidays (Thanksgiving and Christmas) so you can usually pick them up on the cheap. Check my post on Winning at the Grocer, Winter Holidays.

They do on sale sporadically throughout the year, but if you have an Aldi nearby or are a member of a Buyer’s club, you’ll usually find better pricing there. If your Brussels are wilted or yellowed, don’t toss. They’re usually fine underneath. Damage is sometimes sustained at the top of the sprout, that can be trimmed off as well.

Trim the Brussels sprouts by removing the tough outer leaves and stems. Halve lengthwise. Cook the Brussels sprouts in boiling salted water or broth for 6 to 8 minutes until just tender. This is going to vary depending on the size of your Brussels.  Don’t overcook these – you’ll be browning them next.  Drain and set aside.

Heat a large nonstick skillet over medium-high heat. Add bacon and two tablespoons water. Saute for about five minutes or until bacon renders fat and begins to brown. Remove the bacon from pan with a slotted spoon. Discard all but one tablespoon of the drippings.

Add the Brussels Sprouts to the pan and return pan to medium-high heat. Toss Brussels to coat, then add finely diced onion and sliced garlic. Saute until the Brussels Sprouts begin to pick up some color, stirring and tossing frequently. Add the bacon back in and serve. Taste for salt and pepper and add if desired.