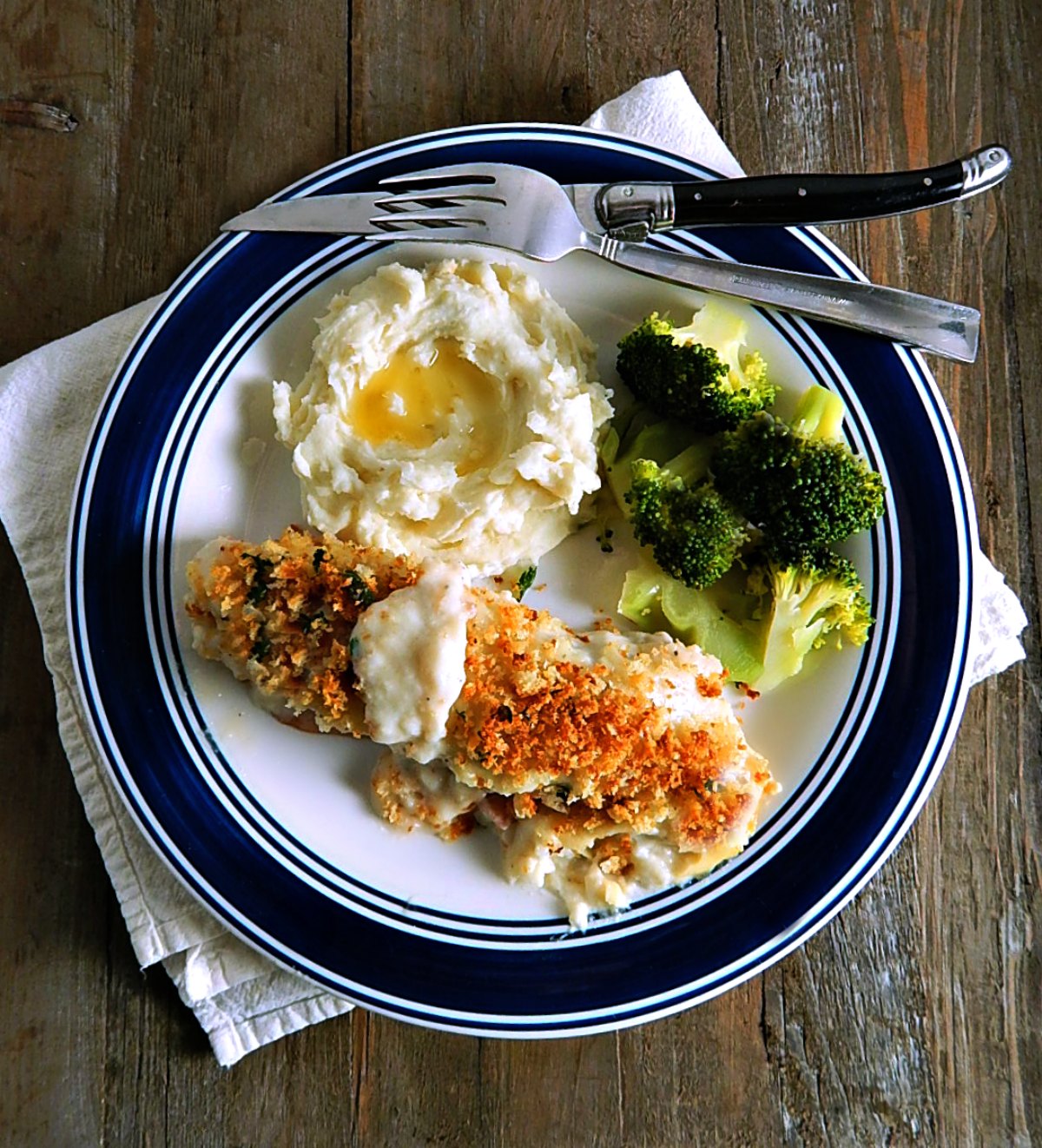 Chicken Cordon Bleu Deconstructed has it all. Gorgeous chicken, wrapped in ham, a delicious Mornay sauce with a touch of Sherry and it’s all sprinkled with marvelous herby, toasted breadcrumbs. My only regret about this casserole? Not making it sooner.

My son’s girlfriend and I spent the afternoon together the other day, chatting it up and making this dish. Since she’s a new cook, we started with the breadcrumbs. A boxed variety will do, but if you sprinkle any dish with the herby breadcrumb topping, you’re gonna up your game.

We moved on to the Mornay Sauce, which is a White Sauce with cheese added. In French a white sauce is called a Bechemel and is one of the five “Mother Sauces” of French cuisine. A white sauce is the base of so many sauces and gravies so it’s a good one to master and I have a post all about White Sauces & What To Do With Them if you want to take a peek. Then we turned that White Sauce into a Mornay Sauce by turning off the heat and slowly adding about 3/4 cup of cheese, bit by bit, stirring after each addition so it wouldn’t separate, break and turn grainy.

That got us talking about all the things this Mornay is used for, Macaroni and Cheese for one. Cheesy Scalloped Potatoes, for another. And in between all this, we did just what my son always suspects when we’re together. We talked about him! 🙂 Not as much as he thinks we do, though! We found time to talk about families, and friends and movies, and whatever else came to mind.

Snuggle the chicken rolls into a casserole dish, top with the Mornay sauce and bake. When it’s almost done, sprinkle it with your fancy, dancy homemade breadcrumbs (or store-bought ones) and give it a couple of minutes more in the oven. Done.

The first time I made Chicken Cordon Bleu Deconstructed, I was a little dismayed when I took out the first chicken “roll” and saw there was quite a bit of liquid in the bottom of the casserole dish. Then I realized what looked like a mistake was actually a bonus. All that Mornay sauce mingling with the juices from the chicken made the best sauce, ever. Just stir it all together and spoon a little over the chicken and it rocks.

This dish is quick and easy to put together and Chicken Cordon Bleu Deconstructed is fast – it only takes about 30 minutes to bake. It’s also pretty easy to increase if your family is a little larger. Just increase everything by half if serving six, and double if serving 8. I originally designed the casserole with four servings, but when I made it the next time, I made six, as you can see in the latest photos on the page. Well, on second thought, maybe you can’t, but trust me there are six servings in my blue casserole.

Chicken Cordon Bleu Deconstructed is pretty inexpensive to make, especially since the casserole uses half of a chicken breast per person. It seems like a lot more, once it’s rolled and the sauce and breadcrumbs go on. Always look for your chicken on sale. I like to get the big family packs when they’re at a low and divide them up in portions my family will use and freeze until needed. Chicken will usually hit a low once every quarter.

Lunchmeat isn’t something I purchase a lot – I’m more likely to slice my own cooked meats (see kitchen slicer) because lunch meat can be pricey. My folks used to like sandwiches every day, so I got used to scoping out the sales. Lunchmeat is another item that’s usually less if you can find a larger bag on sale, and again, it can be divided and frozen. It can sometimes seem a bit wetter when thawed. Usually, that doesn’t matter in a sandwich, but blot it with a bit of paper towel if that bothers you. I bought the chicken and ham for this recipe from Aldi.

Cheese is an item I really look for on sale or at Aldi. If the cheese isn’t opened, it keeps for weeks in the fridge and can be frozen if needed. When thawed it can be crumbly, which is fine for casseroles, but not so good for slicing or snacking. Keep your block of cheese clean, don’t use the counter to cut it on (counters can be so dirty) and use a clean knife. Immediately slip any remaining the cheese right back into a Ziploc if there’s leftover and it will keep much longer.

Easy to make casserole that has all taste of the classic Chicken Cordon Bleu.

Preheat oven to 350 degrees. Butter a small casserole, large enough to snugly hold the chicken in a single layer.

Salt and pepper chicken and sprinkle with a pinch of paprika. Lay several slices of ham out, enough to make a rectangle a bit larger than the chicken breast. If desired, put a log of cheese on each breast. Roll and wrap the chicken in the ham. Place in casserole and repeat for the other breasts. Lay all into the casserole, seam side down and spread the sauce over. Use a butter knife to slightly separate the rolls so the sauce can seep down.

Allow to rest for about 5 minutes before serving. Remove Chicken and stir remaining sauces and juices together in pan.

* Prepare bread crumbs while chicken bakes. Melt butter in a small bowl, add breadcrumbs and stir together. Add the parsley and salt. Mix.

Melt butter, add flour and stir to form a roux. Add milk in small additions, stirring until smooth. Bring to a boil and simmer, stirring now and then until thickened, two to three minutes. Add the tarragon, salt, and pepper and wine. Turn off heat and add grated cheese in small handfuls, stirring after each addition until the sauce is smooth.

Note: If sauce seems very thick, it can be thinned with a little more milk.

Roll the Chicken in the Ham, line it up in casserole; not usually a huge fan of lunch meat, but it works here!