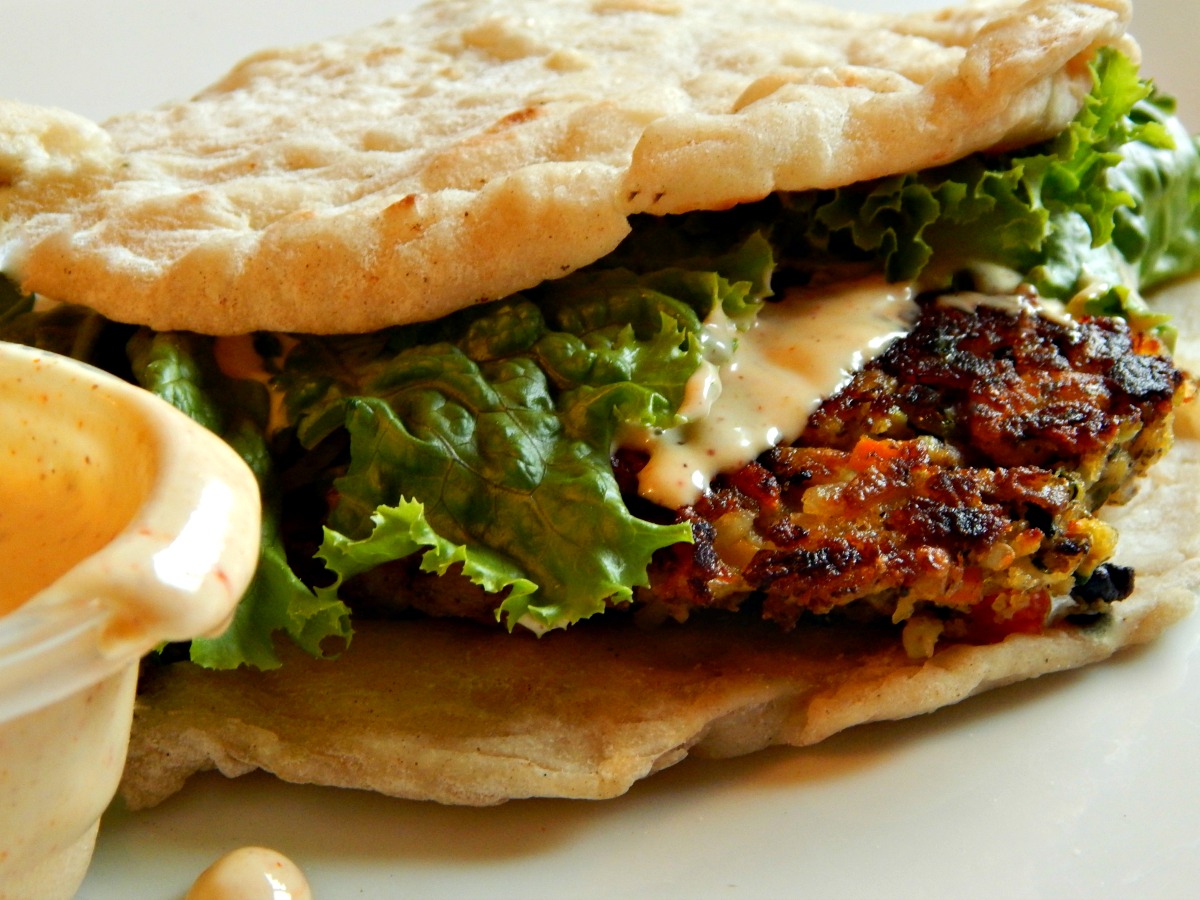 Diners, Drive Ins & Dives is on Netflix this season and this episode features the Sparrow Tavern in Astoria, New York – a run down rock & roll type bar with gourmet style. One of their star items was the Sparrow Veggie Burger and even the carnivores were going on about it. After I made them, I can see why – they’re flippin’ AWESOME! A bit of work, but the best Veggie Burger I’ve ever had!

There was no actual recipe, but with a few rewinds I sailed blithely into the kitchen. The taste was fantastic! The burgers, not so much – they crumbled into what looked like a hash. I searched online for hints, but it seemed everyone who had posted about this burger had come up with the same initial recipe I had…they just preferred not to mention the flaws. Shove it all in a Pita, get a shot and who cares, huh?

It became apparent that my attempt to go light on the grains, potatoes and Panko (what I deemed the less healthier aspects) in the recipe was a partial cause of my failure. Too much moisture was another. Then there was the cooking time/temperature. A bit of tinkering, a few adjustments in the recipe and cooling the burgers before cooking made a huge difference. These burgers need to be handled with care, but they’re vastly improved.

Frankly, there’s a good bit of work here, but its all worth it, I promise! These burgers really are great. Even Kraig, who can easily eat pounds of meat, asked for seconds, then asked if he could make one up later that evening. Then wandered into my room in the a.m. and said, “I was thinking about making up a couple veggie burgers, do you want one?” Yeah, I do! I love it when a veggie burger can bridge the gap between vegetarians and those who follow a Standard American Diet.

The potatoes, mushrooms, barley and brown rice all had to be cooked. I maximized my time by making larger amounts. What I didn’t use was bagged and tagged and tossed in the freezer (short-term only) for down the road. My pressure cooker helped speed this recipe along, too. You do have a pressure cooker, right? 🙂 It’s no big deal if you don’t but some of these whole grains take a long time to cook, stove-top.

Had I planned ahead and made and served corn, potatoes, mushrooms and/or the peas earlier in the week for a dinner or two, making enough extra to use in this recipe, things would have really moved along quickly. I also left the skin on the potatoes, carrots and zucchini – healthier & easier!

This recipe makes eight good-sized, six-ounce burgers (depending on how large the zucchini and carrots are) but the burgers, after being baked and cooled, freeze well. Separate them with a bit of parchment or plastic and keep them in a Ziploc, ready to pull out and saute at a moment’s notice. I’ve started doubling the recipe just to have them stashed in the freezer. You’ll need a huge bowl if you do – I had to use my Dutch oven!

At the restaurant, these Veggie Burgers are served with a Sweet Cayenne Mustard Sauce (it is fantastic!) and frisee lettuce in a Pita Bun. I used my Super Easy Flat Bread with Romaine and red onion – these tend to be a bit *meh* on a hamburger bun. Accompanied at the restaurant by Sweet Potato Fries with rosemary and onion, my Stupid Simple Sweet Potato Fries make a great (and easier) substitute.

Eight burgers ran me about $3.75, not counting buns, Sparrow Tavern’s Sweet Cayenne Mustard Sauce or extras, leaving plenty in the budget for all kinds of add-ons and sides. Talk about a bargain! Sure beats one burger for about 10 bucks at the restaurant. Better, it costs about half that of the cheapest stamped out, premade hamburgers – and these rock!

Using hands, heavily mix all ingredients except oil until it forms one cohesive mixture. The mixture should not feel “wet” but rather very thick and heavy, and the mashing should be firm enough to distribute all ingredients through out the mixture, but not so hard as to break open the peas. Refrigerate and leave for at least one hour, overnight is fine.

Measure out six-ounce portions (this works out to about a cup, loosely packed.) Form into a tight ball, really pack it. Place on a well greased baking tray. Gently press and form into uniform patties, rounding edges.

I found it easy to form patties by placing mixture into a one cup measure, pressing down firmly, packing to about 3/4 cup, then tapping the mixture out on the baking tray and then forming.

Bake in a preheated 350 degree oven for 45 minutes. Do not turn patties. Rotate sheets from top to bottom about halfway through if using more than one baking sheet. Remove from oven, let cool, then cover and refrigerate. Once refrigerated, the patties are easier to remove intact from the pan with the help of a thin spatula.

When ready to serve, heat a tablespoon of olive oil in a non-stick pan. Add desired amount of patties and cook until golden brown, flipping once. It’s best to cook quickly over a fairly high heat, starting with the side that was on the bottom when baked. Over cook and they can be a bit mushy and crumbly, under cook and they won’t be crispy, so look for a good golden brown color.

from the kitchen of http://www.frugalhausfrau.com, adapted from Diners Drive Ins & Dives

Zucchini and Carrots should be grated carefully, then strained if necessary

Related Post: If you’d like to read a review of the Sparrow’s Veggie Burger, read Yum Veggie Burger. She’s reviewed a LOT of Veggie Burgers, and Sparrow is in her top 10.