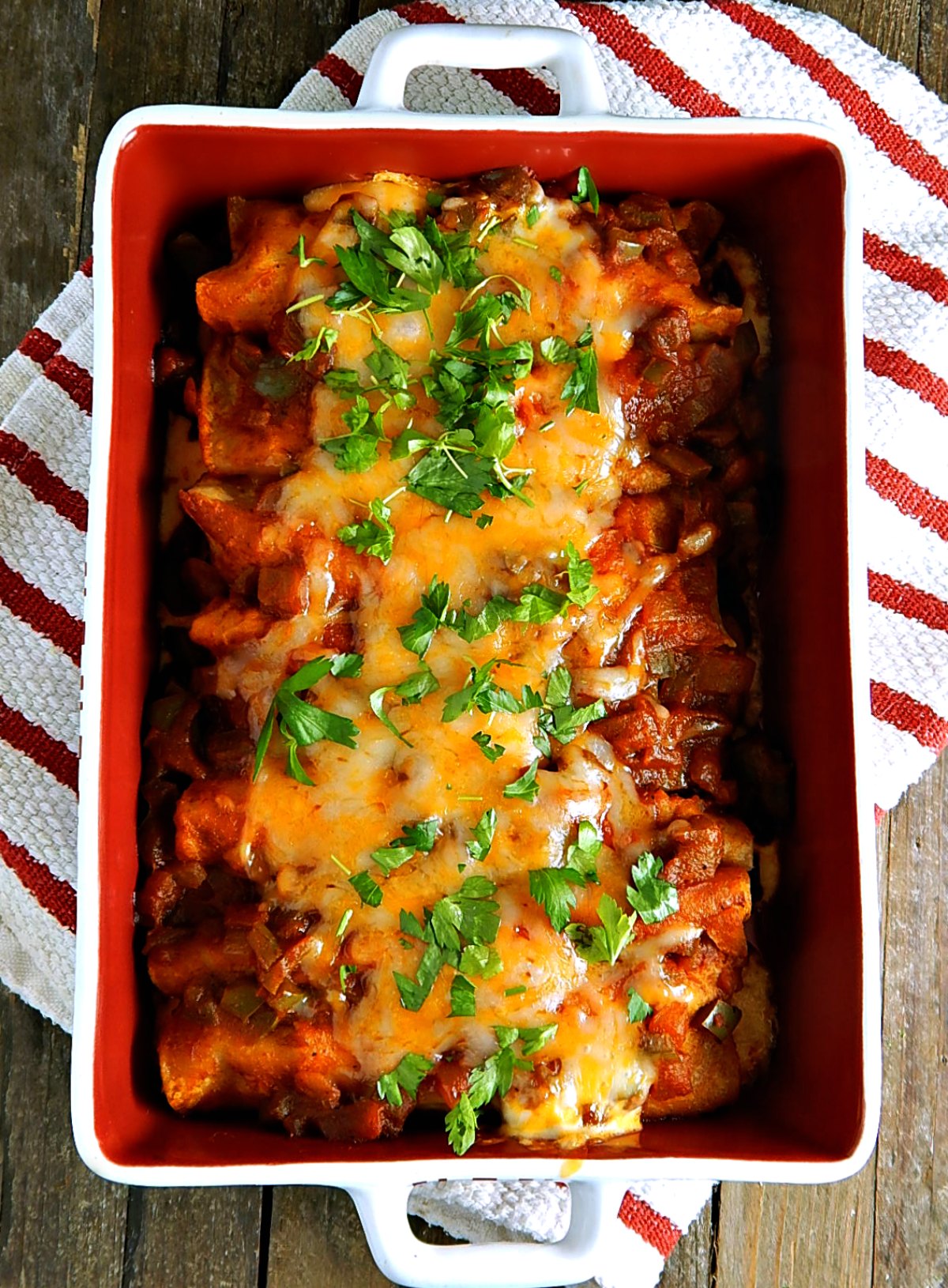 Ya gotta know I love me some me some Mexican, Southwestern or Tex Mex food (see my collection of Recipes for Cinco de Mayo or Anytime), and these old school Chicken or Turkey Enchiladas are one of our longtime family faves. I’ve been making them since I was just a kid – and that’s been over 40 years now (dang, I’m getting old!) and they’re just as good today as they were then. I guess you could say they’re a classic!

About Turkey or Chicken Enchiladas with Ranchero Sauce:

I think probably most people know Ranchero Sauce, like this Simple, Classic Ranchero Sauce, whether they know it or not. It’s a fast, fresh “garden” sauce and usually has a veggie base of onions and bell peppers along with some kind of tomato sauce. The hallmark flavor is just the faintest sweet/sour taste from just a touch of vinegar. It’s like the Spanish sauce that’s often on omelets and it’s the same type of sauce I use for my Eggs Poached in Rancheros Sauce, for Huevos Rancheros and these other classic Enchiladas, Three Cheese Enchiladas with Braised Pork & Ranchero Sauce. Well, I guess you can tell I like Ranchero a lot!

That Rancheros Sauce really sets off the rich creamy, cheesy filling in these enchiladas. And that filling just couldn’t be easier! Especially if you start with leftover chicken or turkey as a base. And no worries; if you don’t have any leftover, you can just poach your chicken and then that poaching liquid can be used in the sauce instead of chicken broth. Then that chicken or turkey gets mixed up with two kinds of cheese, a creamy Mexican type cheese or plain old cream cheese along with some Cheddar, Monterrey Jack, or Colby.

There’s not much to making Turkey or Chicken Enchiladas with Ranchero Sauce. I like to use a flat, wide skillet for the sauce since the enchiladas have to be “dragged through” it before being rolled up. Then I just snug everything together to make the enchiladas in kind of an assembly line. First, there’s the skillet for the oil to condition the tortillas (more on that, below), the skillet with the sauce, a plate to land them on with the filling nearby, and finally the casserole dish. If everything is close together and in reach, you’ll avoid a potential mess.

The most important thing for this or any enchilada recipe is to “condition” your tortillas. (Although admittedly, I sometimes make these enchiladas with flour tortillas, too, then you can skip all the conditioning process.) There are various ways to do this and I think I’ve seen them all, but there is only one way that’s going to give you the absolute best texture on your tortilla so it won’t get soggy or fall apart after it’s filled and baked. And it’s a bit of a pain but just takes minutes.

You’re going to heat each tortilla in a small bit of oil, just until the edges crisp up a bit but the tortilla is still flexible. Now you can try shortcutting by spritzing your tortillas with oil and baking them, just watch carefully, or just spritz with oil and use them as is. Results of the final enchiladas always vary with the last two methods. See photo at the bottom of the page of how the tortilla should look.

Saving Money on Turkey or Chicken Enchiladas with Ranchero Sauce:

This is a very cost-effective meal, especially if you pick up your ingredients on sale, use leftover chicken or turkey and serve your Chicken or Turkey Enchiladas with Ranchero Sauce with a budget sides like Mexican Rice or Refried Beans.

Grocery store cheese is the cheapest option but think about the fact that more flavorful Mexican cheeses will allow you more “bang for your buck,” a bit more flavor for a smidge more cost if budget allows.

Recipe originally priced November 2011 for $5.46, repriced March 2014 for $4.16 – the difference? I’ve gotten much better at recognizing and shopping good sales on cheese!

In a large skillet, saute onion and bell peppers if using (no need to saute Poblanos or the canned chiles, just add them when the onions are done) in oil until softened. Slowly stir in the tomato sauce and stock along with chili & cumin.

Bring to a boil and simmer, uncovered, about 15 minutes until slightly thickened, stirring now and then. This sauce should still be quite loose because the tortillas will be dipped in them.

Add the sugar, vinegar if using and salt & pepper to taste. Simmer a minute or two longer to blend the flavors.

Note on Sauce: Many Ranchero sauces contain just a touch of vinegar which lends a slightly sweet/sour vibe. If you’d like, add about 1/2 teaspoon white or apple cider vinegar to the sauce. Increase sugar to 2 teaspoons.

Place all cheeses (room temperature if using cream cheese) in a bowl. Gradually add milk of your choice, blending. Add onion and stir in. Add shredded poultry and mix together well, breaking up the poultry as it is mixed. (If the poultry is warm, this may be easier.) Taste, add the salt if desired.

Note: The onions inside the enchilada are not cooked, so don’t go overboard on them; if there are too many, they will overwhelm the filling. Other than that, all these ingredients can be played around with a bit – add more cheese or not as you desire. Changing the volume may change the amount of filling in each enchilada.

Prepare a 9 x 13″ casserole by coating with cooking spray and cover the bottom with about 1/2 cup of sauce.

Heat about a quarter inch of oil over medium-high heat in a skillet just large enough to hold tortilla. Test for readiness by dipping an edge of the tortilla in the oil. If small bubbles form around the tortilla, the oil is hot enough. Lay out a large plate to place the tortillas on after their dipping and prior to being rolled. (hint: make this an “assembly line” of the oil, the sauce, the large plate and then the casserole.

(see photo, above in text of post, on color and texture of tortilla when it should be removed from oil)

Working with six tortillas at a time, and using tongs if possible, lightly fry each tortilla in a skillet with oil (about 1/4 inch deep) until it just begins to crisp and takes on a bit of a golden color, but doesn’t become totally crisp: place tortilla in oil, immediately turn it over and fry for a few seconds. When the edge begins to firm up and the tortilla shows a few bubbles, turn again and fry for a few seconds more. The tortilla, when finished, should only have a slight crispness and still be quite flexible.

Place a scant 1/3 cup of filling on the top tortilla in the stack, roll, and place in the casserole, seam side down. Repeat with the next five tortillas. If tortilla begins to crack, try rolling from a different edge, keeping the crack to the inside of the roll. Repeat process with the next six tortillas.

There should be enough room in the casserole dish for a row of 10 and two tortillas in the space on the side. When pan is filled, cover with what sauce remains, making sure that the edges have a bit of sauce on them. (While a spoon works, it is often easier to resort to clean hands.)

Cover pan with foil and bake at 350 degrees for 15 to 20 minutes until hot and warmed through. Uncover, sprinkle with cheese and bake three to five minutes longer. If not using cheese, uncover and let tortillas crisp up a bit, about the same amount of time. Placing cheese in a strip down the middle always makes it seem like “more.”

This tortilla is just right – a bit of golden color, the edges are firm and it has a few bubbles, but it is still flexible.

When using cheese to top a casserole, use a better, stronger cheese. Then rather than sprinkling it over the top, try adding it judiciously. Here in this casserole, I left the edges “nude” and sprinkled all the cheese down the middle. That means a lot less cheese is used but there still is that melty, stringing cheese goodness we all love – only a lot less of it. The same amount would have been “lost” had it been evenly sprinkled over the top of the whole casserole.

This makes 12 enchiladas – if your family is smaller, you could certainly freeze and then reheat 1/2 of them – since they keep so well in the fridge, we generally have part at the beginning of the week, and the rest for a second meal later.

6 thoughts on “Chicken or Turkey Enchiladas with Ranchero Sauce”