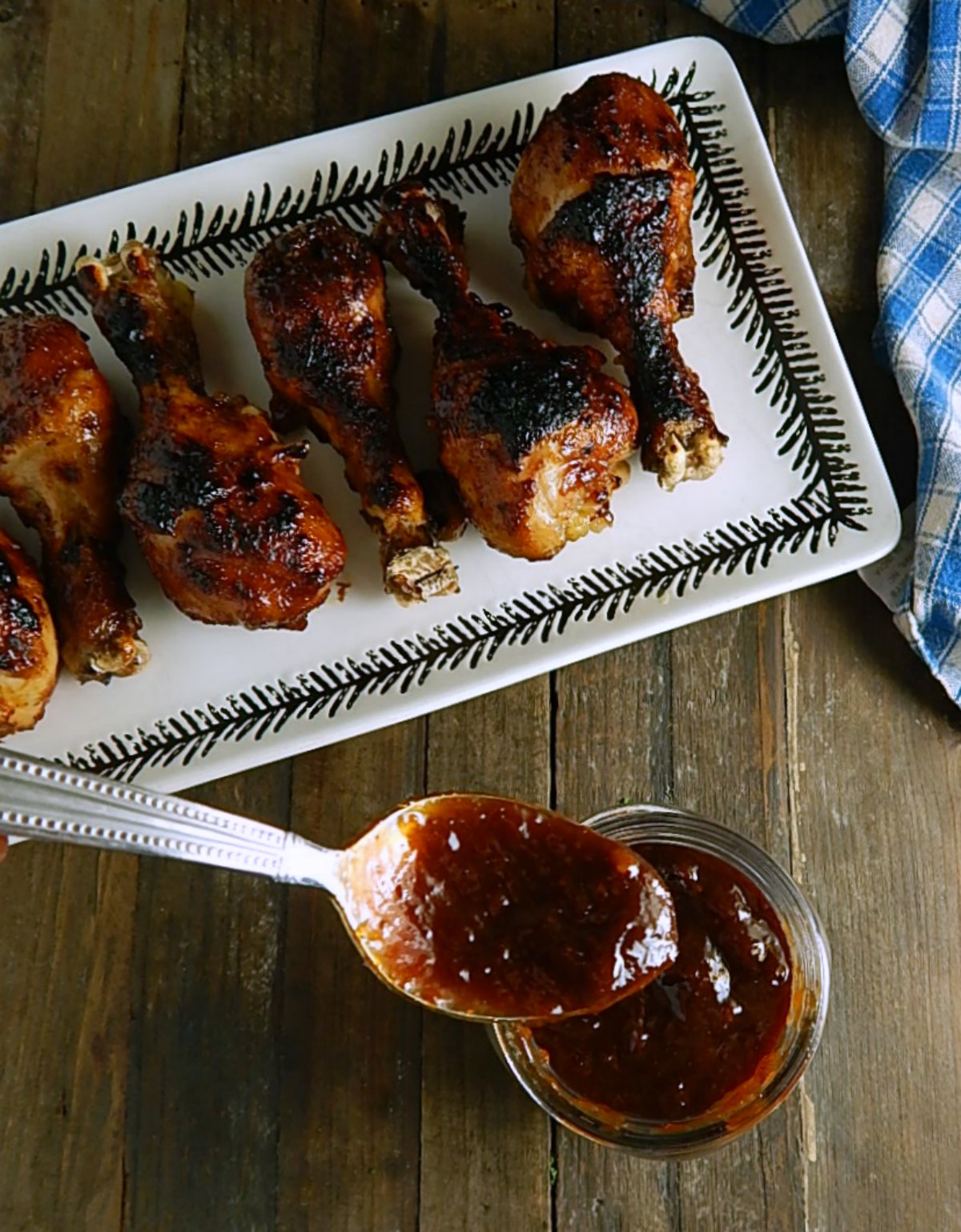 I have a true confession. And don’t get too excited to hear some juicy tidbit. It’s just that I’ve never been a huge fan of chicken legs and/or drumsticks. It was these Instant Pot Barbecued Drumsticks that converted me. Done in the Instant Pot, this budget cut of chicken becomes absolutely luscious, beautifully rendered and moist. A short stint under the broiler with your favorite barbecue sauce crisps the skin and gives Instant Pot Barbecue Drumsticks lovely caramelization. If you’re not feeling the broiler, you can’t go wrong with tossing these on the grill to finish.

Heck, if you time it right, maybe no one will even need to know they started out in the IP. You can be manning the grill, tossing these on before company comes or the kids gather for dinner and you don’t really need to let anyone know you’ve only been there a few minutes. Just act as if you’d been standing out there for hours, the sun beating down, sweating in front of the hot grill, loving tending these drumsticks. That is guaranteed to earn you a “free” beer or at least some brownie points, right? And no one will be the wiser.

I didn’t mess around when I made these Instant Pot Barbecue Drumsticks. They’re just about addictive! I went with a family pack, dusted them with a not so secret (anymore) super simple rub, and tossed them in the IP. And yeah, don’t expect them to look good when they come out. It’s the second stage of cooking, the broiling or the grilling that’s gonna turn these into absolute crave-worthy drumsticks. You’re going to want to make a lot; they’re going to go faster than my deplorable, labra-dorable, Chance, after one of the wild rabbits my neighbors feed!

For the best results, you’ll want a good, thick, sticky-sweet barbecue sauce so you get all that caramelization, one with a good amount of tang for balance and just a little kick to keep boredom at bay. I’m talking maybe a Classic Kansas City Style Sauce (my homemade Kansas City Barbecue Sauce is so good recipe coming!) or even better, my Grape Jelly Barbecue Sauce, Upgraded. Honestly, I’d go with the Grape Jelly Barbecue Sauce on these every time, it’s so tasty and super easy, but hey, I’m all about the options. If you don’t want to make a sauce, just use (and no one is paying me) Sweet Baby Ray’s or one of your favorites.

I actually made these a little while back and I’m trying to remember what I served them with. I think it was my luscious Instant Pot Collard Greens (recipe coming soon to a blog near you) and Cheesy Grits, but you cannot, simply cannot go wrong with cole-slaw and potato salad! The grits and collards are classic barbecue pairings but nothing beats a backyard cookout feel more than coleslaw and potato salad. It almost makes me miss picnic tables. You couldn’t go wrong with any baked beans or a little cornbread, maybe? I have multiple recipes for all of those things here on my site (Have I been blogging too long?) so just toss the name of what you’re looking for up in my search bar at the upper right. Maybe a menu of “barbecue” sides is in order before summer ends.

As I wrote this post, I realized that this recipe is not unlike my Instant Pot Barbecue Wings in that they go from the IP to the broiler or grill. Check them out if you’d like, they have a fun White Alabama BBQ Dipping Sauce which would be fun on these drumsticks, just in case you want to gild the lily.

I was inspired by the Kitchen Whisperer’s recipe for Pressure Cooker BBQ Jelly Drumsticks, but I wanted to keep this recipe super simple, but still kickin’ so I went with just a couple spices on the chicken legs, but ones that pack a bit of a punch. It’s never a bad idea to overseason just a bit when you use the Instant Pot; it cooks under pressurized steam and that can wash a bit of the rub off, so don’t’ sweat the amount of chipotle powder. It’s going to be just perfect when finished. If time allows, dust those drumsticks up a bit ahead of time and let them sit. You could even go overnight. I gave them just a few minutes and they were just fine.

Keeping the drumsticks so simple will give you bit of time to whip up either one of the two barbecue sauces I mentioned, the Grape Jelly Barbecue Sauce, Updated or the Classic Kansas City Barbecue Sauce. And it will give you a bit of time to get out a side or two. Just in case you don’t want to make a whole meal just of the drumsticks, which now that I think of might not be a bad idea, lol! If you do decide to make something like cornbread and are using the broiler on the drumsticks, watch your timing so the cornbread is out before you need the broiler.

One thing about the IP, it does need liquid in the bottom. All the drippings and some of the spices collect in the liquid in the bottom of the pot and it’s kind of an amazing brew of flavors. I like to use that, along with any leftover barbecue drumsticks as a base for a soup of some sort. Like maybe my Barbecue Chicken Chili. With all that flavor you really don’t need much actual chicken in the chili and the chili already has lots of protein from the pintos, the cheese, and the dairy, so you can easily get by with just a little leftover chicken. If you’re using those lovely juices from the pot, they’re a little salty; watch the salt in what you’re making with it.

I already mentioned that chicken legs, or drumsticks as we call them in the States, are truly a bargain. In my neck of the woods, I’ve seen them drop down to 49 cents a pound in the large family packs.

While there’s no doubt they are bigger and meatier than they used to be in the past, you’ll still probably want to count on serving more than one to adults and teenagers, so keep that in mind, and these are so good, it’s hard to resist seconds. Still, even at that bargain price, you’ll most likely want to serve them with some good sides to supplement the meal.

When you stock up on drumsticks at the low and portion the larger family packs for future use, keep all of the above in mind when deciding how many you want to portion into each package for your family.

No need to man the grill, unless you want to, for these fun sticky sweet Instant Pot Barbecue Drumsticks.

Mix the spices together. Dust the drumsticks with the. Add 1 cup of water to the instant pot, then the rack, then add the drumsticks in, standing up, fat side down.

Seal the Instant Pot and set to High Pressure, 13 minutes. When finished, let release naturally for 5 minutes then release the remaining steam manually.

If using the broiler, set oven rack about six inches below the broiler unit. Set up a rack, heavily sprayed, over an aluminum foil-lined (for easy clean up) sheet tray. When the chicken legs ae finished cooking in the Instant Pot, remove them and place on the rack, in two rows, the fat side towards the center. Brush with barbecue sauce, place under the broiler and broil, turning the sheet pan front to back if necessary or moving it around until the sauce has somewhat dried and the legs are caramelized in spots. Turn the legs over and repeat. Be patient; this process will take 8 to 10 minutes.

If using the grill, add the chicken legs to the grill, brush with barbecue sauce, then close the lid for a minute or two. Once the sauce looks a little dried, turn over, brush the top side and grill until you see grill marks and some good caramelization where the chicken meets the grill. Turn the legs over and caramelize what was the top side.

I’ll be sharing Instant Pot Barbecued Drumsticks at Fiesta Friday #291 hosted this week by Diann @ Of Goats and Greens and Jhuls @ The Not So Creative Cook.