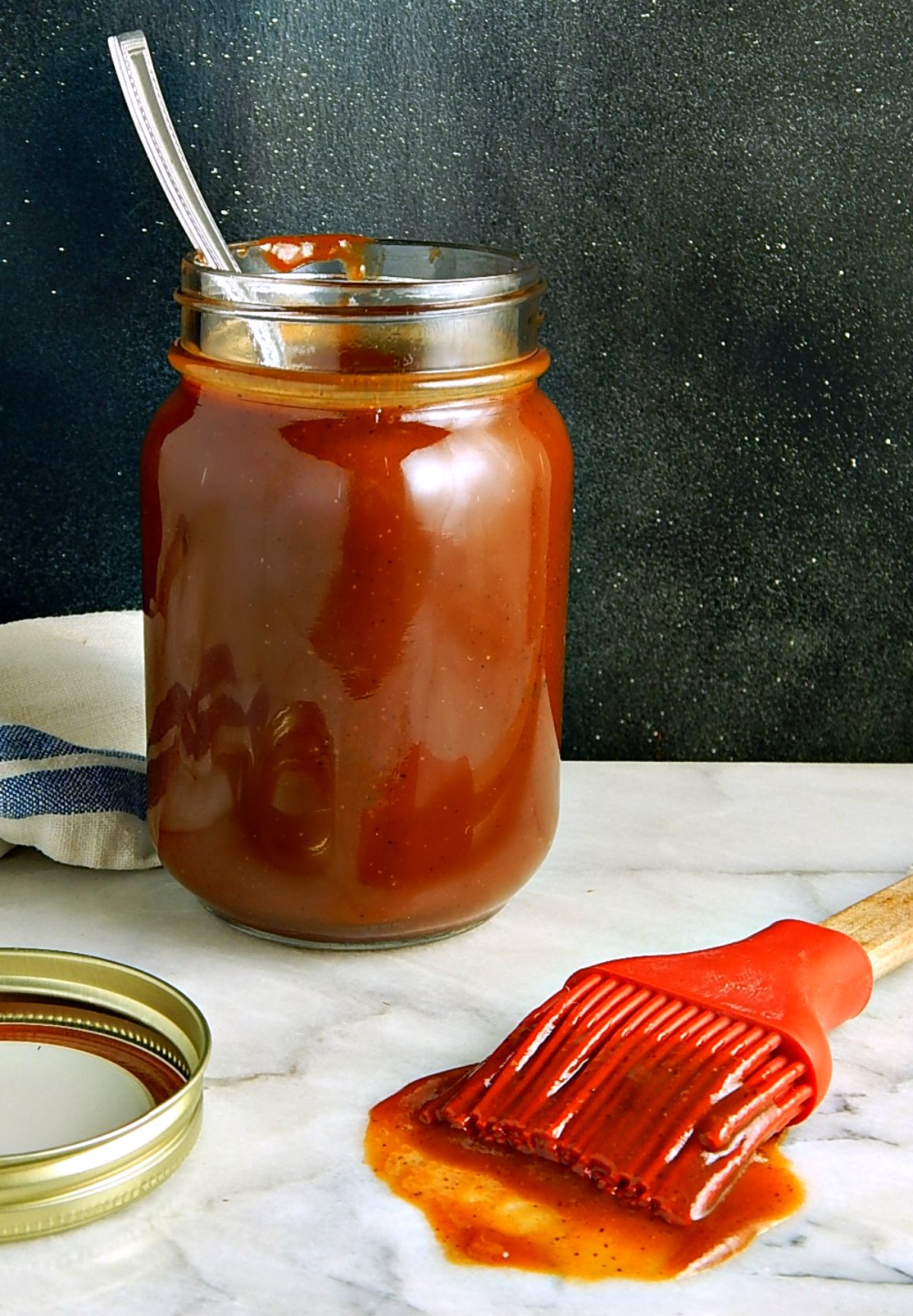 Kansas City Barbecue Sauce is my ultimate comfort barbecue sauce. Growing up in the Midwest, that’s just what we used, or should I say what my Dad used. It was always glossy, on the sweet side with just a bit of a kick at the end. And it was always used on his grilled chicken.

Now Dad didn’t do any smoking or barbecuing, but he had grilling down to an art form. He pretty much stuck to the Midwestern standards, huge burgers, stuffed hot dogs, grilled chicken, steak, either individual ones or this Teriyaki London Broil. And he cooked foil packets of the most amazing potatoes to go alongside. That being said, he didn’t make any of his own sauces but I bet he would have loved tinkering with them had it only entered his mind.

When I first started making my own barbecue sauces, I was inspired by Famous Dave Anderson, who early on (1996) opened some of his barbecue joints here in the Twin Cities. We used to go to the one in Calhoun Square; they had live blues which we loved.

Shortly after, my son and I randomly met Famous Dave at a bookstore in a mall (he was very personable) and so of course, I bought the book. And it was from that book that I first learned how to make barbecue. The kids refused to touch my first attempt, ribs. They were convinced the bark was because they were burnt! But back to the sauce. This really is my favorite “sweet” sauce and I think well worth making. Just think of the street cred!

The strange thing is I cannot for the life of me remember what I made that I originally used it on. Because I don’t usually randomly make barbecue sauce just for the sake of making it, although this one is that good. I could just eat it off a spoon! And I have. As the commercials for one of the hot sauces say, “I put that &@#$#@ on everything.” Most recently, it went on my Barbecue Pulled Pork Nachos.

This is an easy barbecue sauce to make. Just start out with a pan that’s a bit bigger than you think you might need; as it gets close to being done it can start to sputter. If it does, give it a quick stir and turn the heat down a bit.

You start off sauteeing and onion in butter for this sauce, and it really has to be butter because as it cools, that’s part of what thickens the sauce. Then everything gets dumped in except the liquid smoke. Do you guys use liquid smoke much? It’s a little intense, so you’ll want to be careful (like don’t pour it into the measuring spoon over the sauce) but it’s pretty amazing stuff. I included it on my Top Secret Super Stealth Arsenal of Ingredients. It keeps literally for years. Mustard powder is on that list, too.

But back to the sauce. The onions are chunky, and you can deal with them in one of three ways.

The sauce thickens as it cools, so it’s always a bit of a judgment call as to when it’s done.  Err on the side of it being just slightly thinner than you want the final product to be. If it’s too thick when cooled, just add a touch of water and stir it in. If it’s too thin for you once cooled, your only option is to heat it back up and simmer it longer.

Now as you can see, this barbecue sauce, like so many, is built primarily on condiments. It’s a great way to get a lovely smooth texture and lots of complex flavors. Watch for most condiments during the Summer Holidays and stock up at a low. Your second chance is right now, around the Superbowl. Most of these items won’t hit a low price again until Summer. If you’d like to see more of my Holiday shopping strategy, check out Winning at the Grocery.

Watch for spices and herbs to be on sale around holidays, too, and late spring always brings the big Catalina sales (that’s where your store spits out a piece of paper giving you dates to come back and instructions to buy so many items to get a coupon to use like cash at your store) on McCormick’s line of spices, herbs, and extracts.

Thick and sweet with just a bit of heat, this barbecue sauce is a classic!

In a large Dutch oven (use a large one to contain any sputtering), heat oil until shimmering over medium-high heat. Add onion and a pinch salt, and cook until softened, 5 to 7 minutes, stirring often.

Whisk in broth, vinegar, molasses, brown sugar, tomato paste, ketchup, mustard powder, hot sauce, chili powder, garlic powder, and pepper. Bring sauce to a low simmer and cook, stirring occasionally, until thickened and reduced to about 4 cups or to desired thickness, watching closely at the end, about 20 to 25 minutes. (It will thicken more ss it cools.)

Off heat, stir in liquid smoke. Let sauce cool to room temperature. Taste and add salt or more pepper if needed. For a thinner, smoother texture, strain sauce before serving and for a thicker texture, blend the onions in.

Store in refrigerator; keeps well for three to four weeks.

I’ll be sharing at Fiesta Friday #312, where I am co-hosting this week. I’ll also be sharing at the Weekend Potluck #413 at South Your Mouth & What’s For Dinner Sunday at the Lazy Gastronome. Be sure to stop by if you’d like to catch up on your favorite bloggers in one place every week.