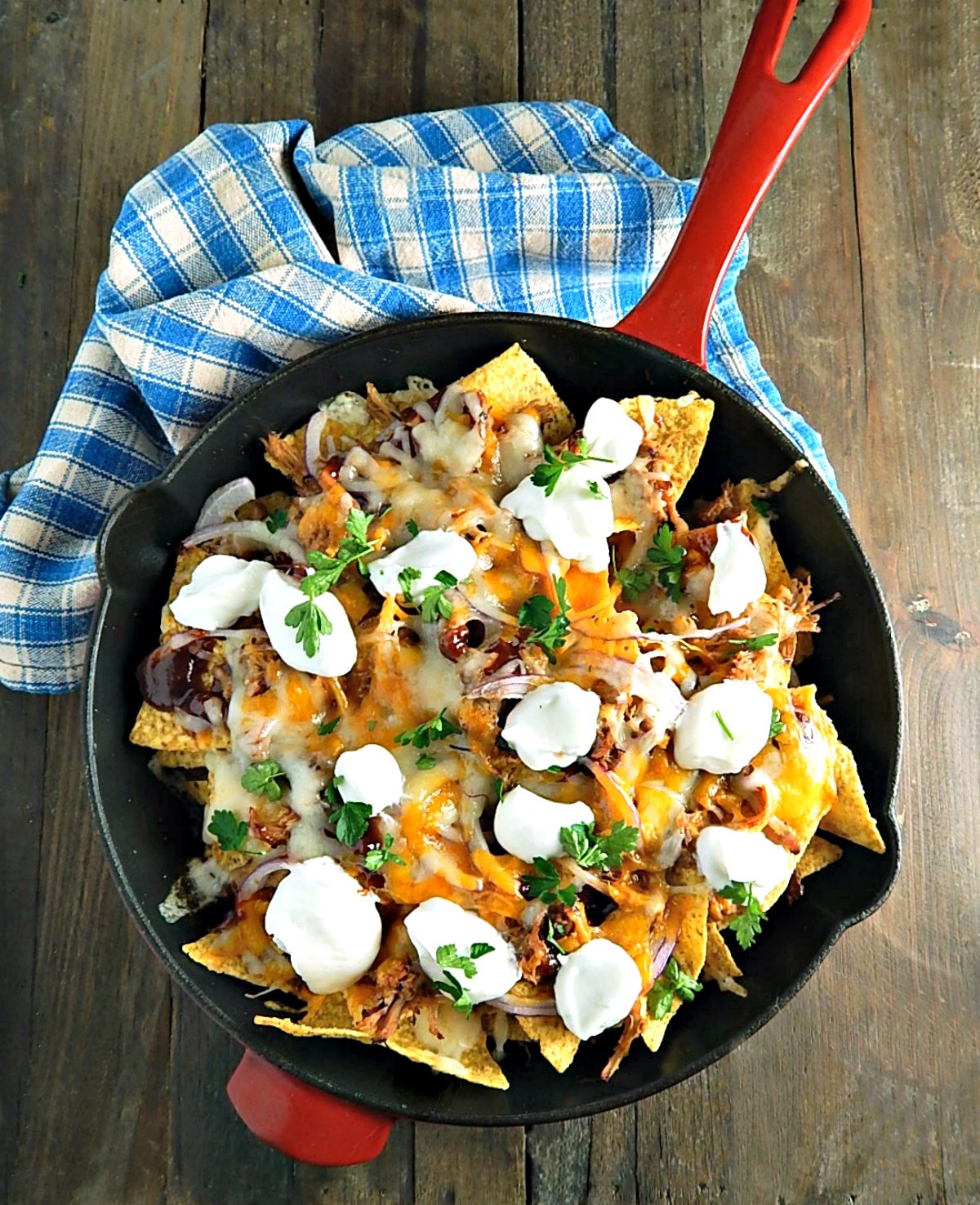 Yanno when I accidentally came across the video below I knew I had to make some Mega Dope Chos. I apologize to you before you ever push play, this is so bad on so many levels. But it made me laugh, and made me make nachos. And what better time for a killer (or mega dope) Nacho recipe than for the Superbowl. So here’s my Barbecue Pulled Pork Nachos.

Of course this year, for Superbowl 2020 in Miami, the line up is the San Francisco 49ers and the Kansas City Chiefs playing. Oh gosh, so many ways to theme your party! With my apologies to the fabulous food scene in San Fran, I kinda think I have both teams covered. Nachos as a nod to the great Mexican American found all over California and of course, who doesn’t love Kansas City Barbecue! Maybe I should apologize to KC, too, because the BBQ in these nachos is an easy slow cooker or Instant Pot recipe unless you want to smoke your own. But never mind all that! These nachos are fabulous!

So I gotta give you a disclaimer! First of all when it comes to the Superbowl, I’m all about the food, the commercials, and the Clydesdales. And not necessarily in that order! And probably I’m one of those that ends up in the kitchen. For me, that’s where the real action always is.

I gotta say, I don’t eat nachos much, which I think (hope) helps balance things out because when I do, I usually go all out, especially if it’s for an occasion, and these nachos qualify. Layers of chips and pulled pork and cheese on cheese, all drizzled with your fave bbq sauce. Then dolloped all over with sour cream. Now, I’m wondering why I don’t get more Superbowl party invitations, and hoping, too, my Doc isn’t reading this, lol!!

Now you’re gonna want to finish these off with all of your favorite nacho accompaniments, even though I didn’t add much for the photos! Hey, I was more interested in taking a few pics and serving while everything was still warm, ooey, gooey cheesy deliciousness! Maybe try my easy Refrigerator Pickled Jalapenos and/or one of my salsas. See my Condiments & Sumpin Sumpins menu for a whole array of possibilities or use your own favorite homemade or store-bought.

Getting the Pulled Pork Barbecue:

I’m frugal, and so I would never spend my time and energy making just enough barbecue for a recipe like this one. Instead, I would shop carefully and pick up a pork shoulder at a low, probably a six to 12 pounder, either cut it into portions or stuff it as is in my freezer and when I want pulled pork, cook it up. Then I’d serve my pulled pork, probably in sandwiches and make sure I stashed enough away in packets (frozen if not using right away) for recipes like this.

But you want to make this today or at least soon if you’re here! You’ll need to pick up a roast, and you’ll need one of at least two pounds because it’s difficult to make a long braised recipe like pulled pork (no matter what method you use to cook it) with anything smaller. If you can’t find a small pork shoulder, ask and see if the store will cut one down. If it’s boneless, and you want to buy that much, you can cut it yourself when you’re home.

Two pounds of pork shoulder should give you enough pork for 12 to 16 servings or so, depending on how much you lay on those nachos and what you call a serving. It’s all so variable. Too much pork on your nachos can be just too much, though. In my photos, I made a much smaller amount of nachos by the way, and used about a cup and a half of my pulled pork. FYI. If you have extra pulled pork and need inspiration, check out my post on Leftover Pork. I highly recommend using leftover for my Grandma Pizza, which inspired these nachos!

So It’s your choice, make a lot of pulled pork and use and/or stash the leftovers. Make less, and make a ton of nachos (maybe for a party like the Superbowl) or have fewer leftovers.  I’m giving you my fave methods to make “barbecued” pork shoulder. Cut the recipes down if needed. Just click on the photos to take you to the recipe. And don’t overlook that you can always get pulled pork (it will be more expensive) at a restaurant, your store’s deli area, or by the tub in many groceries.

Once you have your pork, there’s really nothing to the recipe. Get your fave chips, your pulled pork, thinly sliced red onion and have your cheese and barbecue sauce at the ready.

As far as the cheese, use what you want, but I like Cheddar for the most flavor and Monterrey Jack for its great meltiness. And I don’t like to combine them, but layer them on one by one. For best melting, grate your own.

Assemble in a skillet (or several) or on a sheet tray, depending on how much you’re making: chips, pulled pork (make sure it’s not wet), onion, cheeses, barbecue sauce and repeat.

Two layers work best, three at the most, just to make sure it melts all the way through. Even with three, I like to toss the nachos in the oven for a few minutes to heat through, then add the top layer. It’s so important everything be hot and bubbly in the middle before the outside becomes too done.

So we already talked about the pulled pork. Let’s talk chips & cheese!

Chips are almost always on sale throughout the summer, around sporting events and holidays. You can pick them up at the buyer’s club if you’ll go through that amount, but usually, you’re better off timing your urges with the grocery store sales. Honestly, at full price (and even on sale) they’re not cheap…you can have sales priced salmon for about the same amount as the per pound of chips! I think there is a reason they usually don’t come in one-pound bags; most people would be even more shocked with easy to make comparisons! Shop carefully!

Cheese is an item that is on sale so often, it’s not that hard to keep stocked up at a low. Again, an item that’s on sale around sporting events and holidays and periodically drops to a low throughout the year. Aldi has great prices, rivaling grocery store sales pricing. Your buyer’s club might. Crunch the numbers. Beware of sliced or shredded. Sales often include both along with the blocks but sometimes the packages don’t contain the same number of ounces as the blocks do. Stock up at a low; it keeps for weeks unopened in the fridge. And do know the highs and lows in your area so you know what a good sale and what a great sale is. If you buy too much, in a pinch it can be frozen although it will be crumbly once thawed and suitable only for things like casseroles.

Servings and ingredients can vary so much; This is a recipe to get you in the ballpark to make your nachos for a crowd.

Bake for 8-10 minutes until cheese is melted and bubbling.

I’ll be sharing my nachos at Fiesta Friday #312, where I am co-hosting this week. I’ll also be sharing at the Weekend Potluck #413 at South Your Mouth & What’s For Dinner Sunday at the Lazy Gastronome. Be sure to stop by if you’d like to catch up on your favorite bloggers in one place every week.