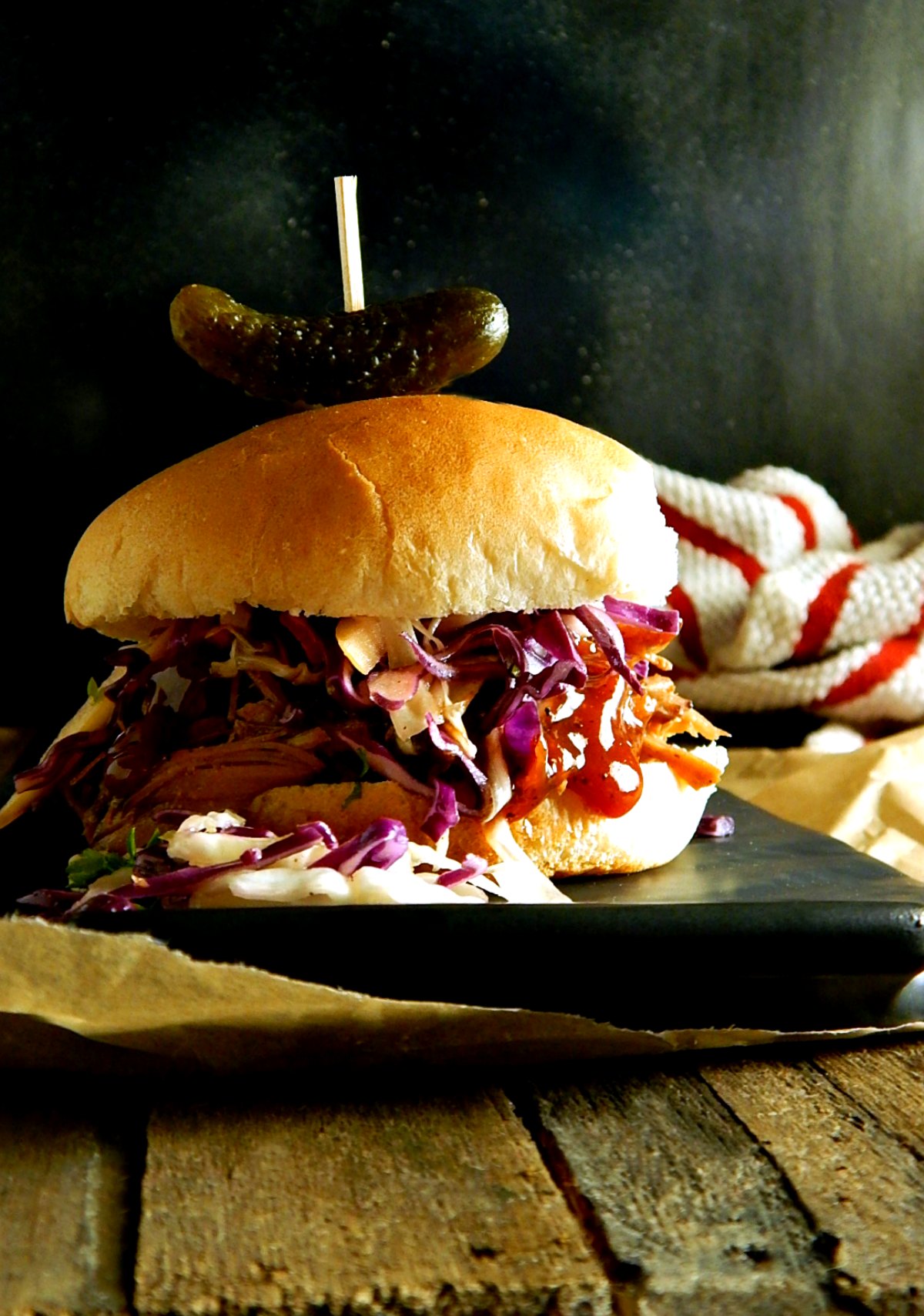 I always love to make a Slow Cooker Pulled Pork. It’s so easy and there’s nothing like a set it and forget it recipe. Of course, this Slow Cooker Pulled Pork takes a bit of time but that’s pretty much time while you’re doing whatever you have to do. And then there is that tantalizing aroma filling your kitchen, driving you nuts, until the moment you open that slow cooker to this glorious pork and snitch that first bite before you even take it out. Don’t you tell me that’s just me!! I know you do it, too. Or maybe it IS just me?

And while nothing can be compared to a bonafide Pork Butt, also known as Pork Shoulder, smoked in a barbecue, this recipe, done in the slow cooker, yields absolutely moist, tender and delicious results. And it could hardly be simpler.

Making a pork shoulder, especially in the slow cooker because it’s so hands off, is one of my favorite things to do. Um, food-wise, at least. And while some items can be a bit iffy in the slow cooker, Slow Cooker Pulled Pork isn’t one of them. The slow, moist environment does wonders for that cheap cut of meat, rending out a gorgeous, silky, unctuous pulled pork and surprise, it even forms a “bark” – the wonderful bit of chewy, crispy crust that’s so prized by people who love real deal barbecue.

If you’re having a party or a buffet, there’s hardly a more economical or well-loved item to toss out on the table. Served on buns, a little goes a long way. Put out the “fixins” and don’t forget the slaw. And of course, Slow Cooker Pulled Pork practically creates a casual party atmosphere which is great if you are on a budget – keep the sides casual, too. Potato salad & baked beans come to mind, and if you are drawing a blank on options, think about what your fave bbq joint has on their menu.

I’m going to give you all my secrets to make the best Slow Cooker Pulled Pork, and most of these hold true for cooking any barbecue style pork roast or pork butt as they are sometimes called, no matter what the method.

Pork Butt is generally found in sizes ranging from the six to 12-pound range, and sale prices, depending on where you live, might range from $.89 to $1.99 a pound. Sometimes, I’ll divide a roast like this up to make several different meals and sometimes I’ll cook up the whole roast in the slow cooker like today.

This roast was a 10 pounder, at a great price, probably because I bought it the week before the Superbowl, $1.49 a pound. Cooked, it made about 5 1/2 pounds of shredded pork after the excess fat and the bone was discarded – I say about, as there was some snacking and smacking away of hands as I stood at the counter shredding the meat. This weight should hold true whether smoked, baked or cooked in a smoker, and it works out to a cooked price of $2.70 a pound, dry. That’s a fantastic bargain any way you look at it, and it gives you a base point to compare if you’re ever considering buying precooked pulled pork in a tub.

A cup of the shredded meat (lightly packed and dry, no sauce) weighs in at about 5 ounces, so this roast yielded about 17 1/2 cups of shredded meat. This should give you an idea of how much making your own compares in cost to something like a Curley’s, Lloyd’s or another purchased brand of barbecue. Granted, you’ll still have to add a sauce (which will add weight and cost), but the pricing of $.86 cents a cup is looking pretty good by comparison! I’d guess that around 1/3 of a cup is about right for a sandwich, depending on the size of the buns.

What to do with all the Juices from making Slow Cooker Pulled Pork:

The roast gave off about a quart of juices (four cups) after it was defatted and a little used to moisten the meat. You paid for it, go ahead and use it. It doesn’t go to waste at my house and hopefully, now, not at yours. Since the juices have picked up some flavor from the rub, think about flavors that go well with the flavors of the rub you use: Cayenne, Chili Powder, Garlic, Onion, etc. I’ve listed a few possibilities, but check out my Soups, Chowders & Chilis menu for even more inspiration.

All these flavors will be marvelous in soup/stews that have a natural barbecue flavor like my Vietnamese Pork Noodle Soup (no it’s not Pho) Georgia Brunswick Stew or this Barbecue Chicken Chili (just sub in the pork for the chicken) and the broth can easily be nudged into the realm of Mexican flavors, too. Think about Pork Chili, a Chile Verde, or a Pozole. Save out a few good-sized chunks of the pork, refrigerating them to firm that natural collagen back up. Carefully cut and add them back into your soup or stew towards the end of the cooking and you’ll have marvelous, tender chunks and not just shreds in your finished soup or chili.

Pulled Pork from the Slow Cooker

Remove any skin and excess fat (down to 3/8ths of an inch) on the top of the roast. Score through the fat down to the meat every inch or so in both directions.

Sprinkle and gently pat the rub onto the bottom side (non fat side) of the roast. Turn over onto plastic wrap and sprinkle and pat the rub on the top. Wrap in plastic and refrigerate for at least two to three hours and up to overnight.

Place in crockpot and cook on low for 8 to 11 hours. Cool in juices for 30 minutes or so, until easy to handle. Shred while still warm. Toss with about a cup of the juices (or a barbecue sauce, like Pride of Deer Camp Barbecue sauce) and refrigerate.

Note: Post updated, text & photos, January 2019. Thanks to my daughter, Jess for the lovely platter, a part of an hors d’oeuvre set, to my Sis in law, Joan who sent me a pic of a “flight” three sliders that got me thinking, and my friend Jaxx, the Bearded Hiker, whose post on Alabama Sliders (Roll Tide) inspired me to spear pickles! Jaxx, I told you I was stealing your idea!