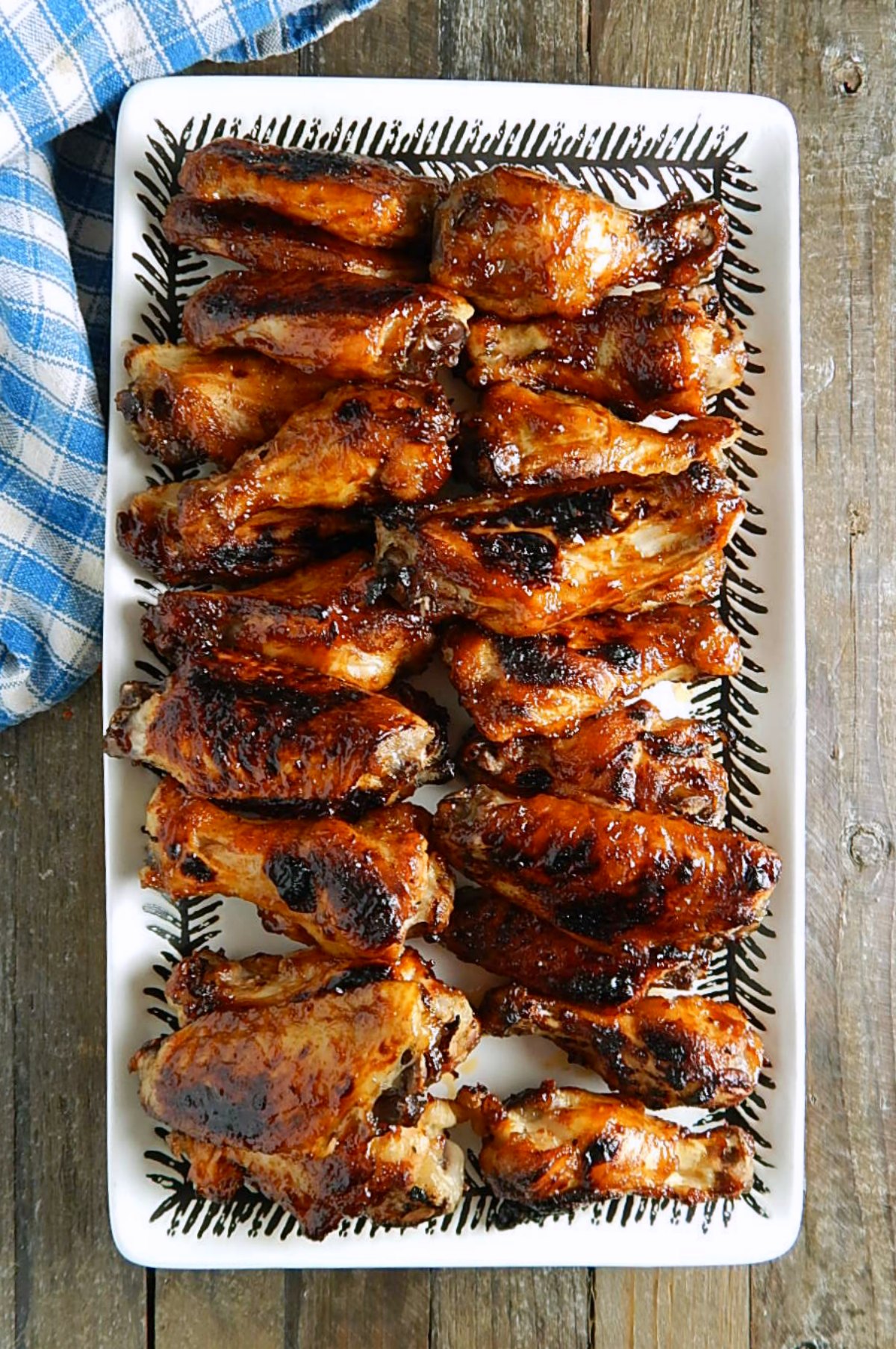 I always think of Wings, Sports Bars, and Football together. Like they’re connected in my mind, and in my head, you can’t have any them without the other. But Wings are great anytime you want to have a sporty get together and with March Madness upon us (the NCAA Men’s Basketball Tournaments if you’re not in the know) why not have your wings on the couch, in front of the TV? You can knock out some pretty great Instant Pot BBQ Wings at home, pretty darned fast!

And ya gotta know, I’m not going to leave you high and dry if you don’t have an IP. I have another wing recipe on my site that I love, Thai Chicken Wings and that method will work great with the barbecue flavors of these wings. I’ll put that method in the recipe. below, too in case you don’t have an Instant Pot. Then you don’t have to be paging back and forth if you’re cooking these wings in the oven. But if you’re using your IP? Finish them off under the broiler or on your grill.

And speaking of barbecue, I love that these Instant Pot BBQ Wings are dusted with rib rub (maybe one of mine or your favorite) cooked to perfection in the Instant Pot and then brushed with sauce to be broiled (or grilled if you lean that way) into sticky, caramelized glory. Now me, I think most wings, in general, are all right. They’re something I wouldn’t turn down if you get my drift, but the big fan of wings is my son, Kraig. And these def got a big thumbs up from both Kraig and his girlfriend, Tweety. And yup, even from me. And yup, they were big sticky thumbs up!

I think people try to cook everything in their Instant Pots these days, and I do love mine and use it all the time – but there are some things that really shine in the IP. Chicken wings (and ribs, too) are one of those things. With the IP you can cook any wings with precision to the point of absolute tenderness and they render beautifully, juicy and flavorful.

Of course, those wings don’t look too attractive right out of the Instant Pot, so this is def a two-step process. You’ll take those sad-looking little wings, brush them with your fave barbecue sauce, preferably something a little sweet (I love Sweet Baby Rays) and toss them on the grill or in the oven. That transforms them into a thing of beauty. A tasty thing of beauty!

Then, just because sometimes I have to guild the lily, I serve these Instant Pot BBQ Wings with my Alabama White BBQ Dipping Sauce. Talk about taking these wings next level. Get the napkins, wet naps or whatever you need, or maybe just lick your fingers…you’ll have a glorious feast on these wings.

The recipe for the IP wings couldn’t be easier. Toss your wings with your rub, cook them off in the Instant Pot and then toss them in the oven or on the grill to carmelize to crispy, chewy deliciousness. I do prefer a smoother, shiny type of a barbecue sauce, just a bit on the sweet side because it will caramelize better. Just choose a barbecue sauce you love and you can’t go wrong.

While the IP recipe is super simple, the oven method does require a few more steps, brushing the wings and turning them several times. It’s not hard, it’s just a little fussier, but the results are absolutely worth it. They get brushed, baked and go in and out of the oven, building up that sweet, sticky deliciousness. The deets are in the recipe, below.

I do think the oven part of this recipe, if you use the oven instead of the grill when you caramelize your wings, or if you are baking your wings instead of using the Instant Pot, is best done on a wire rack. A good rectangular wire rack that fits over one of your sheet pans is a handy thing to have around the kitchen for this recipe and others. It also makes a great cooling rack for cookies or cakes just out of the oven.

A while back I wrote a post on Wing Prices – Comparing the Options. Number crunching doesn’t come easily to everyone and wings are one of those items that can be a little mind-boggling with all the different kinds, package sizes, and weights. Honestly, it seems like wings are usually a bit pricier than chicken breasts or thighs. It’s no wonder so many of the commercial enterprises are serving “boneless wings” which are just strips or chunks of either the breasts or thighs.

And while some people prefer the boneless wings, there’s something to be said about the incredible flavor and juiciness of the actual chicken wing! Just know what you’re buying and maximize your dollar. Best thing? The stores respond to sporting events so you know they’ll be a sale during the Superbowl (see Superbowl Savings) on condiments like barbecue sauce and on wings and you will probably see a sale or two around March Madness and other events, too.

I’ve gotten in the habit of saving any juices from the bottom of my IP to add to any soups or other dishes I might be making; this time, when cooking the chicken wings, the IP juices really weren’t very flavorful; I opted not to save, but that’s up to you. Always give what’s in the bottom of your pot a taste – no sense in wasting flavor! If you’d like to see some examples of my IP recipes, check out my Instant Pot Recipes page.

You’re gonna go crazy for Instant Pot BBQ Wings with that gorgeous caramelization – no Instant Pot? No worries. Oven directions are here, too.

Add one cup of water to the bottom of the Instant Pot. Add the rack that comes with your IP. Toss the wings and drummettes with the desired amount of rib rub and add on top of the rack.

To finish in oven: While the Instant Pot is releasing, Line a large sheet tray with foil for easy cleanup. Set the oven to broil, arranging a rack about five inches from the heating element. Pat the chicken dry and toss with 1/2 cup of the sauce. Arrange on the rack, drummettes towards the outside of the rack with the thickest part near the edges, the rest of the chicken in the center. Broil for about 4 minutes. Remove the chicken, turn over, baste the (now) top side of the wings and drummettes with a little additional sauce and broil for an additional 4 minutes.

When broiling, watch closely; ovens can vary in temperature. Broil until golden brown with some caramelized spots.

To finish on grill: While the Instant Pot is releasing, heat grill to medium-high if using gas; if using charcoal, prepare and start grill when the chicken goes in the instant pot. Remove the wings from the Instant Pot, pat dry and toss with 1/2 cup barbecue sauce. Grill until caramelized on one side, then baste with a little of the remaining sauce. Turn over and continue to grill until the second side is caramelized and browned in spots.

Preheat oven to 400 degrees F. Line a baking sheet with foil (for easy clean up) and set a rack on top of the sheet tray.

Pat the chicken dry and toss with 1/2 cup of the sauce. Arrange on the rack, drummettes towards the outside of the rack with the thickest part near the edges, the rest of the chicken in the center.

Bake for about 15 minutes, then remove the chicken and lightly baste the chicken with part of the remaining 1/4 cup of sauce, turn and baste the top side. Place the chicken back in the oven for 10 minutes.

When broiling, watch closely; ovens can vary in temperature. Broil until golden brown with some caramelized spots.

The wings may be prepared ahead up to the final basting when using the oven method and up to the broiling or grilling stage and then finished on the grill or under the broiler when needed.