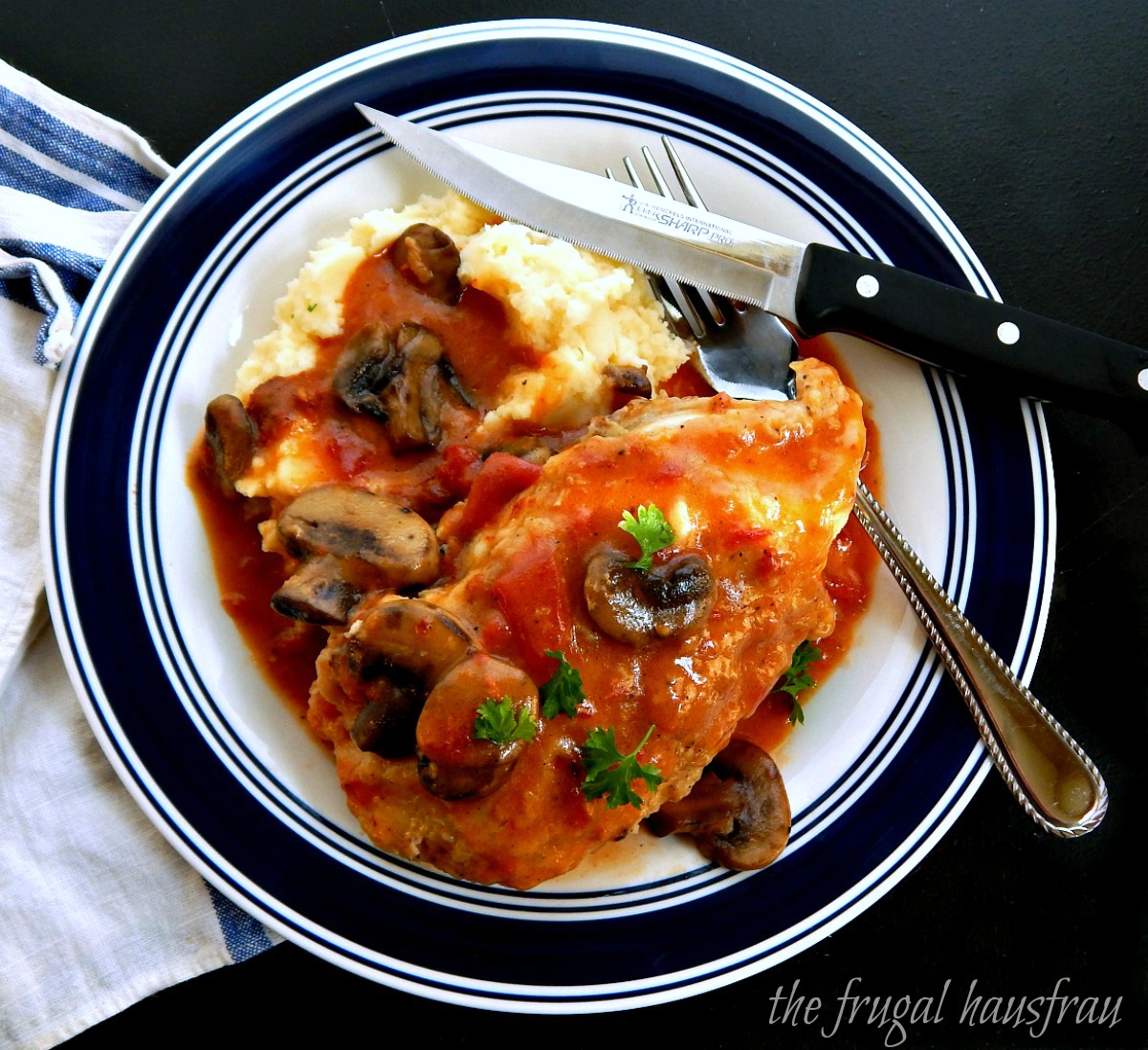 Those were the days my friend. What really sticks out in my mind was making this dinner for my Mom, Aunt Mary, and Uncle George along with some friends they met while we were all on vacation in California. Somehow the friends were invited over spontaneously for dinner, and they entrusted me, a very young me, to do the cooking. I’d made this before, but I couldn’t remember all the deets.

Mom & I ran into town, stopped at a bookstore, looked it up, didn’t buy the book, lol, and then picked up the groceries. My Uncle was in charge of wine and was told (in California, no less) that there was no such thing as a white Bordeaux. I corrected him (and me not yet 21 and not legal in the state at the time, lol!) and off he went to a different wine shop, and somehow we all pulled it off…and we had a lovely dinner with good food, good wine, and good company. RIP to all of the older generation, now gone.

About Chicken Bordeaux from the New York Times Cookbook:

I don’t know if I’m a good cook, even today. People tell me so, and they eat (most of) my food which usually turns out great (except it seems when I visit my daughter and cook for her family. I always mess up something…what is UP with that?) but I think what a really have is a knack for is finding or creating recipes that have what I call an “easy elegance” and/or recipes that coax the most flavor out of simple every day (and/or cheap) ingredients.

Chicken Bordeaux from the New York Times Cookbook is one of those recipes that does both. When you get down to it, it’s just a skillet meal, chicken breast, a little pan sauce. Mushrooms and tomatoes. Wine. Coz a little wine never hurt anything, amirite? It’s the flavor explosion from all those things combined that makes this dish stand out.

Now that I’m decades older, and know a lot more about food, I can see that this recipe also has a lot of downhome components that spark a comfort factor, too. You can see elements of the old standby, Southern Tomato Gravy. Only it’s fancied up with the wine and the mushrooms. It turns out that Craig Claiborne was Mississippi born; maybe he pulled from some of his roots.

It’s not that often anymore that I cook with the whole (well technically, each side of the breast is a “half”) bone-in, skin-on chicken breast these days. So often I’m in a hurry and boneless, skinless is always faster. This is a recipe that you’ll want to allow a bit of time for, and maybe pick up an extra bottle or two of wine while you’re at it. It really is company-worthy.

Even so, the ingredients are few, the instructions pretty simple. You’ll just dredge the breast in seasoned flour, brown in garlic-scented oil, cook through, then build your sauce, or gravy. There’s not much to it but there’s a pretty high payoff in deliciousness!

All that’s needed is a little patience and a bit of tending; that chicken does take a good amount of time to cook through in the skillet, about 25 minutes before the sauce/gravy is started. Then it goes quickly…so make sure your mashed potatoes ae cooking while the chicken is. Preferably, have someone do the actual mashing while you work on the sauce and it will come together quickly at the end.

We’re having what I hope is the last hurrah of winter, another blizzard, so Chicken Bordeaux is a perfect recipe. The great thing about Chicken Bordeaux from the New York Times Cookbook is that none of the ingredients are expensive – they’re all pretty common. It’s just the way they’re put together that makes this seem all gourmet.

You might have to search or ask (like my Uncle George) for that White Bordeaux. It’s not necessarily pricey. If you have to sub, maybe look for a Sauvignon Blanc. That grape comes from the Bordeaux region, too. Look for a Sauvignon Blanc with crisp rather than fruity flavors and if the store doesn’t have little notecards with the descriptions, ask. Most good-sized liquor stores and wine shops, and even a lot of smaller ones have someone on staff just to help. And they don’t make you feel like an idiot and they might even point you in a few different directions, depending on your budget. Their job is to get you to feel comfortable and get you to want to come back, not to dump the priciest option off on you.

I’ve talked a lot lately about chicken and how cheap it is right now, after Easter. Hey, something has to be done with all those chickens that laid all those eggs! Mushrooms I always buy on sale, often around holidays. Turn the package upside down and poke a few holes for longer storage. So let’s talk tomatoes: I’m a fan of buying larger cans of whole tomatoes and dicing, crushing or blending myself. They’re so much better than buying them already canned like that. If I only need part of a  can, I’ll divide the larger can & freeze half. Look for sales with coupons and stock up at the low.

An elegant but easy meal that straddles the line between comfort and gourmet.

In a large skillet, melt the butter and saute the mushrooms. Add the garlic and cook for an additional minute, until garlic is fragrant. Remove and set aside.

In the same skillet, heat the oil over medium-high heat. Season the flour with salt and pepper. Coat the chicken with the flour, reserving the remainder of the flour. Add chicken and brown on all sides.

Cover and cook over low heat for 25 minutes, then drain the oil from the skillet. Push chicken aside and add the tomatoes, crushing as they’re added and tomato juice and heat through.

Mix the water with the flour to form a slurry and add to the tomatoes in the pan, stirring to blend and cooking enough to thicken the mixture. Whisk in the wine, then add the mushroom/garlic mixture along with any juices they’ve let out. Move everything around to distribute evenly. Cover and simmer another 20 minutes or so, or until the chicken is tender.

I’ll be sharing Chicken Bordeaux from the New York Times Cookbook at Fiesta Friday #219, hosted this week by Jhuls at the Not So Creative Cook. Do stop by their sites when you have a minute – Fiesta Friday is a fun link up from some of the best bloggers and you’re going to fall in love with Juhl’s site!

22 thoughts on “Chicken Bordeaux from the New York Times Cookbook”