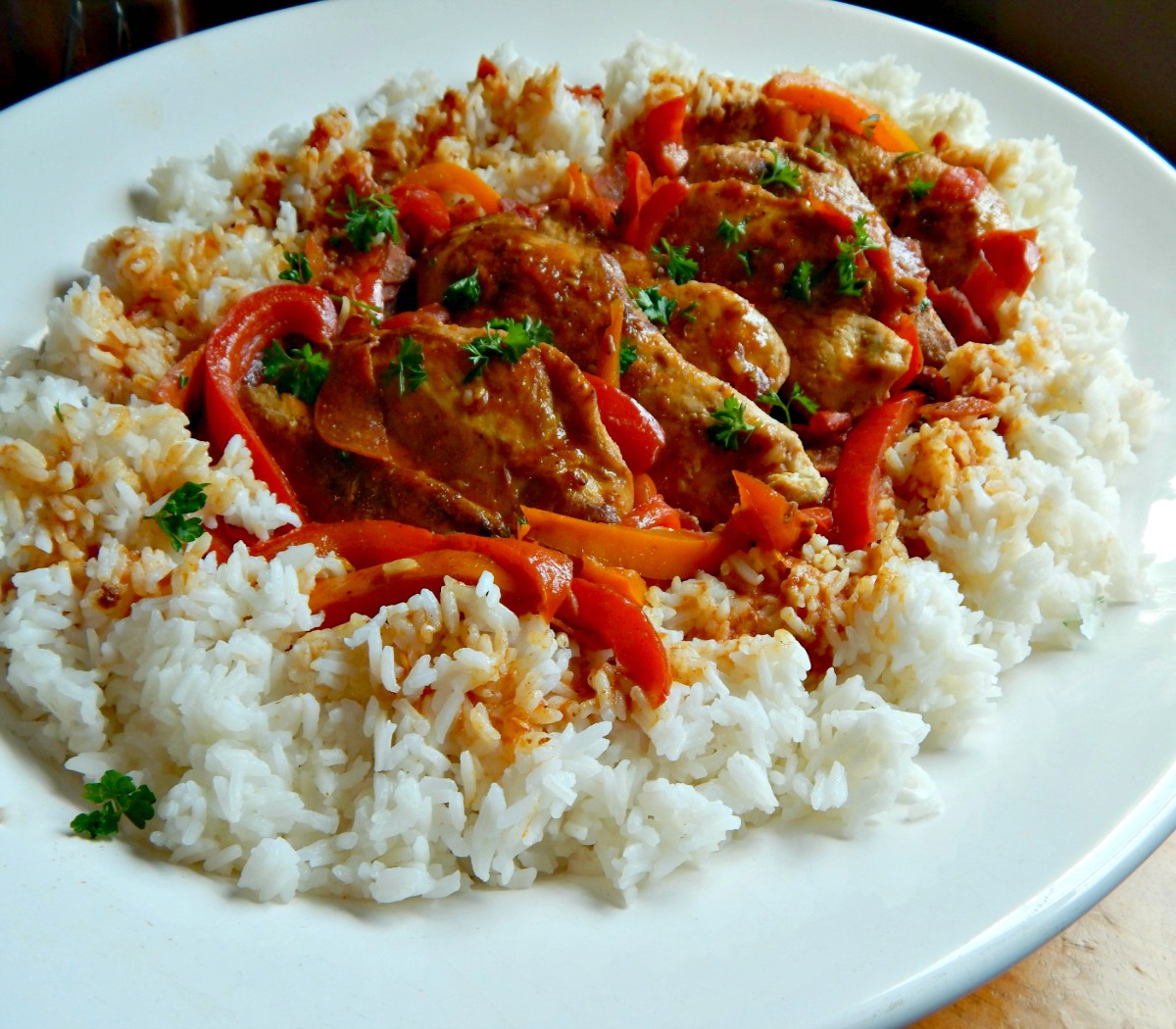 Let’s take you back to 1969:  Jack LaLanne was on every afternoon, followed by the very dashing Galloping Gourmet. We know him today as Graham Kerr, and I can still see him flitting about the kitchen. One day he made Basque Chicken and my baby sister, who must have been around six, begged Mom to make this dish. Poulet Basquaise became a family favorite – I hope it becomes one of yours, too.

Had baby sis talked my Mom into writing down one of Jack LaLanne’s fitness routines, we’d probably all be buff to this day…instead, we all cook – but, hey, no one seems to care about much when they tuck into this incredible chicken dish flavored with wine, sausage and peppers, with a bit of rice to soak up the flavorful sauce.

Living in a small Iowa town, Mom had to use pepperoni instead of the elusive csabai sausage Graham Kerr called for; a good pepperoni, not the presliced is best. A Spanish chorizo would work, too. I stream lined it (one pan only) to make it quick enough for a week night. Sometimes I add a little saffron – it gives a boost to the flavor.

The cooked peppers and tomatoes, although just shown here as a component of the dish, are known as “piperade” or “piperrade” in Spanish. They can actually serve as a dish on their own, and you may recognize them as a “Spanish” sauce served with eggs or omelettes. The rice & sauce together taste like a really gourmet “Spanish rice” which makes sense when you consider that the Basque Region straddles ares of Northwestern Spain and South Central France.

To shortcut this even more, if peppers are at a great price, I’ll cook up a large batch and divide up to freeze which makes this dish almost “instant” on any old week-night. Other times, I may simply substitute a Sofrito for the peppers.

This dish taught me the art of “fortifying” flavor – saving aside and adding in a few of the important ingredients in a second addition toward the end of the cooking process to reinforce the flavor. The combination of the wine and tomatoes that have been cooked longer along with the bit more added in toward the end of the cooking gives you a really complex spectrum of flavor.

Even better the next day, you may want to consider doubling the recipe. My mother liked to put the rice on a platter, make a well in the center and fill it with the peppers and chicken. Then she’d pour the chicken and sauce in the middle and sprinkle it with parsley. I did that for the photos – tres dramatic, but to tell you the truth I usually just serve this “stove-top” and everyone helps themselves! See “Put your Own Spin on It,” below, for some variations.

In a large skillet, heat olive oil, add chicken breasts and brown on one side.  Turn and add pepperoni.  Cook until fat is rendered from the pepperoni, then add garlic and saute for just a moment.  Next add peppers, 1/2 of the tomatoes and 1/2 cup of the wine.  Cover and simmer for about 20 minutes or so, until chicken is just done.

Remove the chicken to a platter and tent to keep warm.  To the skillet, add in the rest of the tomatoes and wine and simmer for a few minutes to concentrate the sauce.  Stir in parsley.

Serve the chicken over a bed of rice topped with the pepper mixture and pan juices.  A marvelous presentation is to place the rice on a platter. make a well in the center and fill with the chicken, peppers and sauce.

When cooking a meal, make your meal “Kit” for next time; your own convenience food. This could be taking a time-consuming component and doubling, tripling or more and bagging it up for making the same dish later.

This works great with things that can be easily frozen, like the peppers for this dish, or with dishes like Chili, Spaghetti, Tacos, Fajitas, etc., that have a whole lot of spices that can be measured out in multiples, labeled and put aside for future meals.

Sofrito, in cup portions; See how thick and jammy it is.

Put your Own Spin on It: