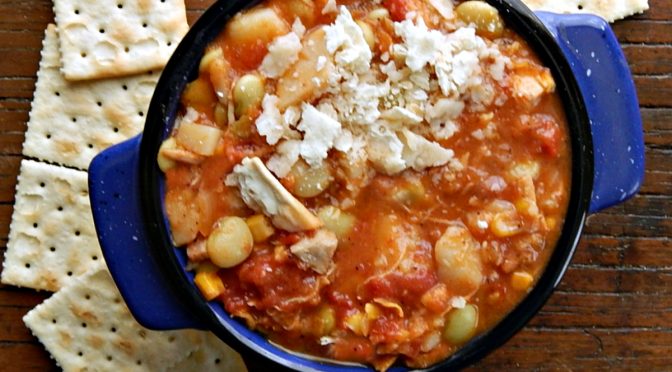 How do I know about Brunswick Stew Virginia Style? Back in the ’70s, we went on one of the very few family vacations that didn’t include dogs (My Dad raised Goldens and showed extensively), probably to try to instill some sort of family bonding combined with patriotic zeal to renew our faith in Family, God, and Country.

Worst trip ever. Seriously. It was 1976, the bicentennial and it was DC in August. And it was a whirlwind of activities, tours and walking in the ungodly heat. Dad remained steadfastly optimistic, goal driven and determined we all have fun whether we liked it or not. That might have gone over better if he had ever let us stop at a restroom. Seriously, it was enlightening and we did learn a lot, but for me? The best part was the food!

We traveled all over the area & one thing my parents never did was cater to the taste of children or skimp in any way on the restaurants. No “kids” menu for us. It was an eye-opener. Fresh lobster pulled from the sea. Regional specialties. And the quaint taverns and period food. Which leads me, after this long ramble, to Brunswick Stew Virginia Style.

My first taste of this style of Brunswick Stew (I think!) was the Chowning Tavern‘s Brunswick Stew, and their recipe is in the Williamsburg Cookbook Mom picked up. Once we were home, bedraggled & somewhat defeated, Mom made Brunswick Stew and several other recipes from the book. (I have to stop to give a shout out to this Teriyaki Steak that became a huge family fave and I still make to this day.) I remember we liked the Brunswick Stew but weren’t thrilled about it, so I thought I’d do a bit of research.

What I found was I know a little about BS (I guess I better spell out Brunswick Stew from now on!) but I know much less than I thought I did though, after skimming through Brunswick Stew: A Virginia Tradition. Wowsa! It’s kind of an amazing read. The Colonial or Virginia Brunswick Stew is a whole different animal than the barbecue joint type Georgia Brunswick Stew I make, even though they look quite a bit alike and share a lot of the same ingredients.

Brunswick Stew for Meal Prep or not.

My Brunswick Stew Virginia Style is a bit of a departure from the Chownings Tavern Brunswick Stew. I wanted to make it as a part of my Meal Prep Plan and use already cooked chicken. This is a great recipe for the Meal Prep Chicken, leftover chicken or rotisserie chicken. In my Meal Prep Chicken posts, I basically made up a lot of chicken (which can be made in the Instant Pot or can be baked) and used it as the basis for five full meals. This Brunswick Chicken was the last meal of the week and it’s a great one to have for meal prep because it can be made ahead, divided into servings and frozen.

I did quite a bit of comparing of recipes and methods for Virginia Style Brunswick Stew and that led me a post by Apple of my Eye. Her recipe, combined with a few touches from Chownings and one or two of my own makes this an easy and very doable recipe to get on the table. No cauldrons involved or hours of cooking!

You’ll start out with a little bacon and onion sauteed together for that down-home flavor, then the rest of the ingredients are basically dumped in at the right time and simmered together. Easy peasy! But when you taste your Brunswick Stew Virginia Style, you’ll swear it had been simmering away for hours. If you don’t want to start out with cooked chicken, add your chicken in with your chicken broth and cook it along with the tomatoes and potatoes. You’ll need about a pound of chicken breast.

Just about any recipe that calls for cooked chicken, as long as that chicken has been bought on sale, is going to be frugal. Know the highs and lows for chicken in your area and pick it up on sale. In my town, chicken breast runs from 99 cents a pound at a low and up to $4.99 or more at a high. That’s a $7.00 difference for two pounds! If it’s in a large family pack, break it down and freeze in amounts your family can use. I used breast, but thighs would be great in this recipe, too.

Follow that same strategy for bacon, but plan on buying your bacon during holiday sales when it is almost always at a rock bottom low. You may find it advertised in a bundle with eggs and/or hash browns. Compare the pricing. Since bacon hardly takes any room, it’s an ideal freezer item. I usually keep some just for recipes, take it out and slice off what I need, then toss it back in the freezer.

I used frozen limas and canned corn in this recipe, but any will do, canned, frozen or even leftover, and this is a great recipe to think of if you’ve made corn on the cob and have an extra ear or two. It’s never as good just reheated the next day, but you won’t know the difference in a stew like this. If you want to use canned, frozen or fresh veggies it’s up to you. Buy them, though, in the late summer to fall when they’re at a low, especially if it’s a pantry staple like canned veggies. If you use coupons, frozen or canned vegetables can be picked up for pennies.

Add bacon to a big pot or Dutch oven, turn heat on and cook until it softens and renders. Add onion, then broth, tomatoes (undrained), potatoes, sugar and Lima beans.

Bring to a boil, then lower heat to medium-low and simmer until potatoes are cooked and very soft, about 30 to 35 minutes. Add the corn, drained or creamed corn (it makes the stew thicker) and chicken and cook at a low simmer until the chicken has softened and begins to break down and the stew is very thick, watching it closely at the end so it doesn’t scorch. Timing will vary, about 10 minutes.

Season heavily with salt and pepper. Add a dash of hot sauce or a little vinegar, if desired. Serve with crackers, cornbread or biscuits.

This recipe is a part of my Meal Prep Plan. If following that plan, freeze two portions of this stew for lunches.

If you wish to use raw chicken, add about a pound of chicken in with the chicken broth, tomatoes, and potatoes. If chicken is very thick, it can be sliced in half horizontally. When done, pull it out, shred it and return it to the pot.

I’ll be sharing Brunswick Stew Virginia Style at Fiesta Friday #211, hosted this week by Diann @ Of Goats and Greens and Antonia @ Zoale.com.