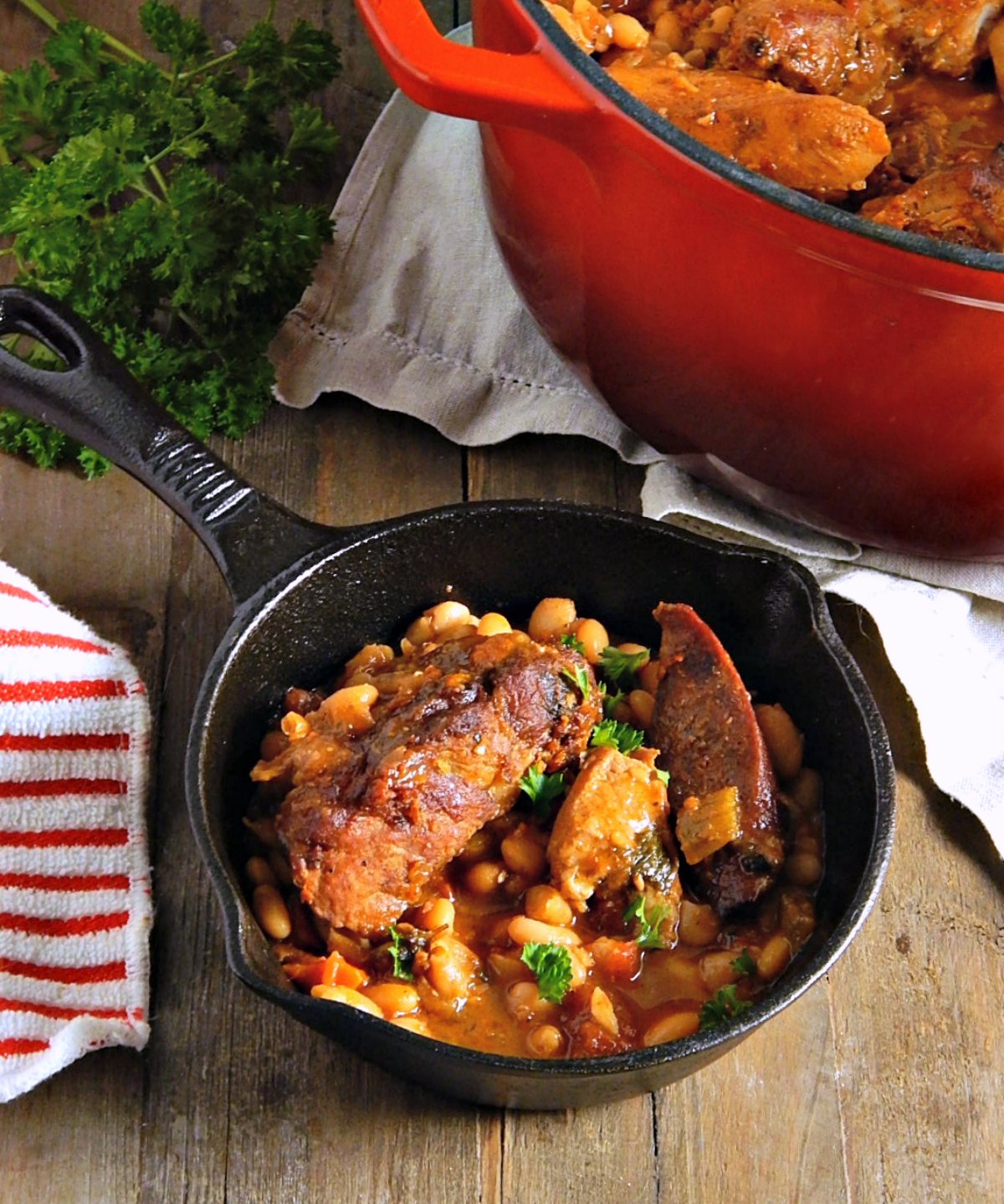 It’s easy to always think about St. Paul & Minneapolis, the Twin Cities, as a Swedish/Norwegian city and we do have a large population. Maybe our weather made them feel at home. But it’s just as easy to forget that our earliest settlements were French and/or French Canadian. So in honor of our French, here’s a “Bean Pot” or if ya want to be fancier, I’ll just call this a Minnesota Cassoulet Bean Pot.

My Minnesota Cassoulet “Bean Pot” isn’t your everyday fare. This is weekend food for sure, the beans started the previous day, then slowly simmered and finished off in the oven for a glorious rich celebration of a dinner. This is just proof that beans can indeed be fabulous! The whole dish is rich, silky and unctuous. I just had to get fancy and say it – but then this is a pretty fancy pot o’ beans!

I fell smack dab into a little French neighborhood when I moved to Minnesota, and live in a 1942 French Colonial built by a man named Larpenteur. There’s not too much “French” left in the neighborhood these days, although many neighbors are French, some houses have pillars and you’ll see a little of that French blue, here and there on shutters. Two of the original homes were just recently lost, one in a fire and another knocked down just this last week. And a dear friend was involved with Our Lady of Lourdes for years and I had the pleasure of helping with making their French Meat Pies a few times. So as soon as I was served a “Bean Pot” years ago at a friend’s sister’s house, I recognized the French in it immediately and knew I had to make my own.

This recipe is actually a really over the top “Bean Pot.” It has beans of course, and a lovely sauce and fantastic flavor but it’s just loaded up with all kinds of meat. Pork shoulder and chicken, moist and cooked to perfection, a good amount of smoky bacon for flavor and then the star of the show, and here’s the Minnesota part, Kielbasa or smoked sausage. It’s really my fave part of the whole dish.

I adapted this recipe over the years, a bit here and a bit there, from a kind of famous recipe by Sandy Hillmer, Wisconsin Cassoulet. She won the Parade Magazine’s Best Recipe of the Year in 1996. I just basically changed a few of the spices, added more sausage, changed the chunks & cuts of meat so they wouldn’t dry out in the long cooking process and tinkered just a bit to suit me. And of course, I changed the name – after all there’s a bit of rivalry between Wisconsin and Minnesota!

Mostly, though, I played around with the cooking times and methods and made something that to me says more Cassoulet than Bean Pot. If you want, this can be simmered on the stovetop and it will give you more of a Northern Minnesota, Wisconsin, Michigan “Bean Pot” vibe and that will cut some of the cooking time off. So my Minnesota Cassoulet “Bean Pot” is a lot like my neighborhood. It’s different now, but if you know what you’re looking for, you’ll see the layers from the past with fresh eyes and realize just how much is still there.

This recipe is pretty simple and straightforward to make, but if you’re cooking with beans, there’s always going to be some judgment calls. You just never really know how long they are going to take and every once in a while, you’re going to get this pot of beans that just takes forever. While, after soaking overnight (it does make for the best beans) you can make this all in the same day, I personally like to cook it most of the way and finish it the next. That way, if it takes longer it’s not that big of a deal.

Any bean dish like this is not the recipe to think of in terms of “I’m having company at five and beans take about two and a half hours so I’ll start it at two thirty!” You’re talking long, slow cooking, so it’s more like an “I’ll start it and it’s done when it’s done” kind of recipe. Oh, and btw, this recipe takes a lot more than 2 1/2 hours. More like 3 1/2 to 4 hours, but after it’s simmering away it’s pretty much hands-off. You’ll just need to add things at the right time and check on it now and then. So you’ve got to babysit it a bit.

Do start all your browning of the meats and veggies as soon as you put on the beans to start simmering. It might not look like that big of a deal to do the browning, but you need to get a good amount of color on all the meats, they’ll have to be done in batches, and it’s a commitment in prep time to get all that done. It’s going to be so worth it though. You’re gonna love it! (By the way, a simplified version of this recipe won the first prize when cooked by my son’s scout group at a Voyageur’s Rendevous up in Northern Minnesota a few years back. Proud Momma moment!)

Beans are always cheap, especially if you’re buying a variety available in your local area. Look for places that sell a lot and have a high turn over. I spoke a lot about buying beans in my post on Brining Beans, Traditional or Instant Pot Method if you want to check out that post.

While most recipes involving beans involve just a little meat and are naturally frugal, this particular recipe has a volume of meat that’s almost stunning. I told you it’s not your every day old bean pot! Feel free to cut back if you’re on a budget. Pork shoulder is downright cheap if you time your buying correctly. Pork Shoulders are usually large cuts (see Dealing with a Large Pork Roast) and you probably won’t use it all. Have another recipe in mind for the rest, maybe this one, Oven Braised Pork with Root Vegetables (the first recipe on my blog!) or follow the tag at the bottom of the post “Pork Shoulder Recipes” for more ideas.

Always buy chicken at a low and freeze in portion sizes for your family. Smoked Sausage is usually at a low in the fall and around Superbowl. Stock up on it for the year if you like using it. And get yourself a freezer, if you don’t have one. It’s great for those meat specials and wonderful to freeze part of large recipes like this that might have leftovers. You might get tired of them served up for a couple of nights or subsequent lunches, but boy you’ll be happy when you pull it out on a cold, dark deep winter night. Be watching for some more leftover ideas, coming soon!

Drain and rinse soaked beans. Place beans in a large, heavy pot and just cover with water. Add in celery, bay leaves & parsley sprigs. Bring to a boil, partially cover and turn down to a simmer. Maintain at a simmer for about 30 minutes, then remove the celery and the parsley. Skim as needed if there is any foam on top.

In the meantime, in a large, heavy skillet, cook bacon to render fat, reserve bacon on a large dish. Add the sausage and lightly brown, remove to the same dish. Add in the chicken, brown well on all sides, working in batches and adding additional oil as needed. Remove to the dish, keeping separate from the bacon and sausage. Add pork to the skillet and brown well on all sides, and again remove, keeping separate from the rest.

If at any point in the browning process, the drippings in the skillet seems to be darkening or adhering to the bottom of the pan in a way that will burn, stop browning the proteins and add the onion, celery and carrot. Deglaze with a bit of water if necessary and cook until lightly onion is translucent. The vegetables will pick up color during this process. Continue on with the proteins, adding additional oil if needed.

If the oil isn’t in any danger of burning, continue on with the proteins, then move on to the vegetables.

Add garlic to the skillet with the vegetables after the onions are translucent and cook for one to two minutes longer.

Stir in the bacon, kielbasa, and parsley, arrange the proteins so that, for the most part, are under liquid and beans. Bake, uncovered for 45 minutes to one hour until beans are completely tender and the top of the casserole has darkened. Check from time to time and add more broth or a little water down the sides if the casserole appears dry.  When finished, the top should be dark, the beans tender but not falling apart and a little soupy. Add additional water as needed.

Serve in large, shallow dishes sprinkled with parsley if desired. Watch for and remove bay leaves as serving. Pass with red wine vinegar.

I’ll be sharing my Minnesota Bean Pot Cassoulet at Fiesta Friday #247, hosted this week by Antonia @ Zoale.com and Laurena @ Life Diet Health. There’s lots of fun fall dishes & Halloween Party food already linked up there! Stop by and check it out.