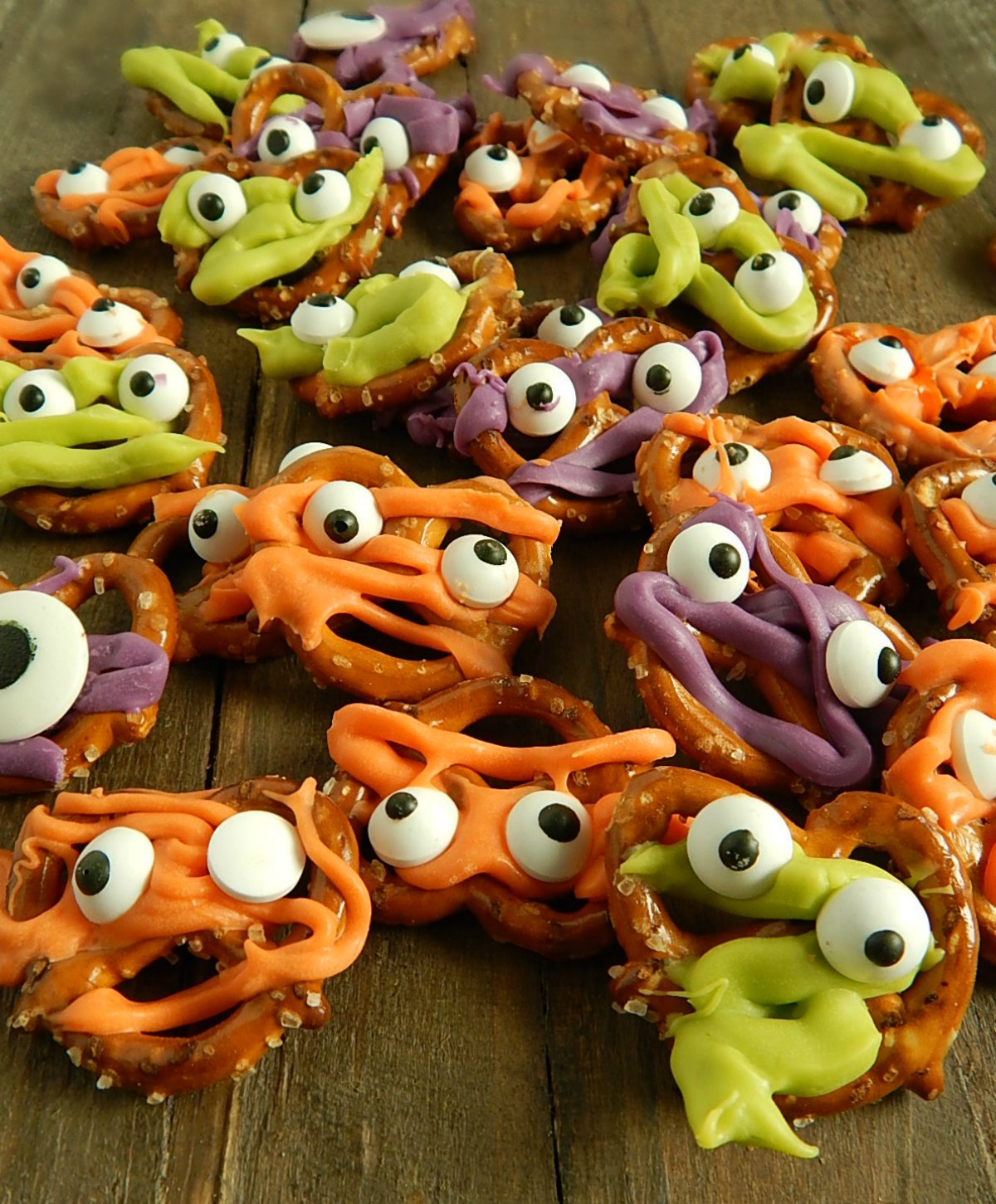 I’ve been seeing little Monsters all over the Internet now that Halloween is looming, and I couldn’t resist trying my hand at them. And no, these aren’t scary Monsters! They’re adorable and they’re Halloween Pretzel Monsters, made with pretzels of course and some fun Candy Melts.

The combo of the Salty Pretzels and sweet, almost white chocolate candy melts made for a tasty treat! They’re surprisingly good salty/sweet deliciousness. And I learned a few things along the way when making these Halloween Pretzel Monsters.

This was my first time working with Candy Melts. Honestly, this is one of those “I saw it and just had to make them posts” and I ran right out to pick up those Candy Melts at Michaels. It wasn’t until I was getting ready to post this for you that I came across this information from Michaels that has a lot of helps and hints. Another hint, just from me – if you are concerned about healthy ingredients, don’t read the label, lol!!

If you know me, I’m not so much about fussy procedures and processes. I’m more about having fun and really wanted to make a few items that I wish I could make with my grandkids. So I did a little experimenting with dipping and frosting to try to make a variety of little treats. I really settled on the pseudo “mummies” because I think they’re darling and they’re so fast to make, so fun and required what amounts to no skill, what-so-ever! Just a little piping and a quick hand with the eyes – make them fast or better yet, make a few at a time because once those melts harden, you’ll need to “glue” the eyes on with more candy melt but if the pretzels haven’t hardened up yet, the eyes stick right on with no problem.

For decorating, I bought a kit with a mix of different decorations, eyes and mustaches and hearts and so on. Depending on how many of these you wish to make, you might just want to go with a bag of eyes. They come in different sizes.

While the piped mummy type monsters are the easiest, the pumpkins were pretty easy, too. Those were dipped, then “frosted” with the candy melts and I used a toothpick to make the vertical lines like a pumpkin has. Before they dried, I dipped the mustaches that came with my candy kit in the candy melt and attached them for a stem. Once they were dry, I used a little orange gel, the kind used to write on cakes, and then sprinkled with edible sugar glitter. They were pretty but not stackable. It turns out that the gel didn’t harden. Ooops!

The dipping for the other random monsters was a bit more problematic for me, so go with your skill level! Sometimes the holes filled in with the candy melt, sometimes they didn’t and sometimes it was a mixture. I’d say just roll with it! You could fill in the holes for the eyes if you want, let the candy melt harden and then dip them. A toothpick can be used to open up the “mouth hole” if you want. I used a toothpick to make some little spikes. Honestly, they were too fussy (and messy) for me, and I went right back to the piped monsters.

The biggest thing to know about the candy melt, other than to be really careful and follow the directions on the melting, and don’t get ANY moisture in it, is how quickly the candy melts harden! On the pretzels, in the bowl, and in the piping bag.

I used to make a lot of truffles and learned when candy making, sometimes it’s helpful to pull out your old electric heating pad (cover it with a towel – you don’t want the candy on your heating pad!) and use it to set your bowl of candy melt on if you’re dipping or your piping bag if you’re setting it down.

It’s also helpful to work out a system. Figure out what kind of little monster you want to make and pay attention to your set up. And you’re probably going to want to work with one color at a time, and I recommend to work with just a bit of the candy melt at a time. If you want to, you can buy special bags to pipe with that are microwave safe. Then the bags can be popped back in the microwave if they need to be reheated.

When adding the eyes, I wish I would have laid all the eyes out, upside down, then picked them up with a toothpick dipped in the melt (so the eyes would stick to it) and turned them right side up onto my monsters. That would have given me cleaner eyes that didn’t have any smudging from my (by then) candy melt covered fingers!

One more hint: Don’t stir your candy melts with a fork or spoon; use a rubber spatula or maybe a plastic spoon, so the candy melt can be slipped off easily. If you use your flatware it’s a lot harder to get off cleanly and likely will be wasted. It washes off easily, though.

Halloween Pretzel Monsters – I learned I could only get the eyes on about a dozen at a time before they hardened.

Candy melt isn’t pricey. It was less than a bag of chocolate chips, but if you’re working with different colors and want to buy several bags, it can start adding up! There are 12 ounces in each bag. Of course, going with a full coverage is going to take longer, and cost more per pretzel. And the full coverage pretzels, inho, were really just too much melt for the amount of pretzel. I liked the more conservative piped ones better.

When I piped, the green pretzels (I snipped the opening in my Ziploc bag a bit larger) took 3 ounces (1/4 bag) of pretzel melts to make about 30. On the orange & purple ones, which have a more conservative amount of piping (smaller hole in the bag) I came up with about 40 to 45 of the little Halloween Pretzel Monsters.

So if you’re thinking about bringing or making Halloween Pretzel Monsters, you could potentially knock out a lot of these puppies in a pretty decent amount of time by piping, and do it all for a pretty reasonable amount of cash! Especially if you have someone helping out with the eyes, and especially if you consider using something else for the eyes rather than the candy googly ones. The eyes really were pretty pricey. Think about using m&m’s or white chocolate chips, pointy end down. If you’re really crafty and have it around, a little dot of black frosting could make a pupil.

Whenever I make candies like this or anything dipped in chocolate, I like to work on the plain, old-fashioned wax paper. Then when finished, gently shake off any salt. Any candy melt will peel right off. Save it, and turn the Ziploc bag inside out and save that, too. Put it in a clean Ziploc by color and use it to make some kind of candy bark, later.

Speaking of storage, Halloween Pretzel Monsters are pretty sturdy, but with rough handling, some of the piping can come off. You might want to store them gently piled on a sheet tray rather than bagging them.

I’ll be sharing my Minnesota Bean Pot Cassoulet at Fiesta Friday #247, hosted this week by Antonia @ Zoale.com and Laurena @ Life Diet Health. There’s lots of fun fall dishes & Halloween Party food already linked up there! Stop by and check it out.