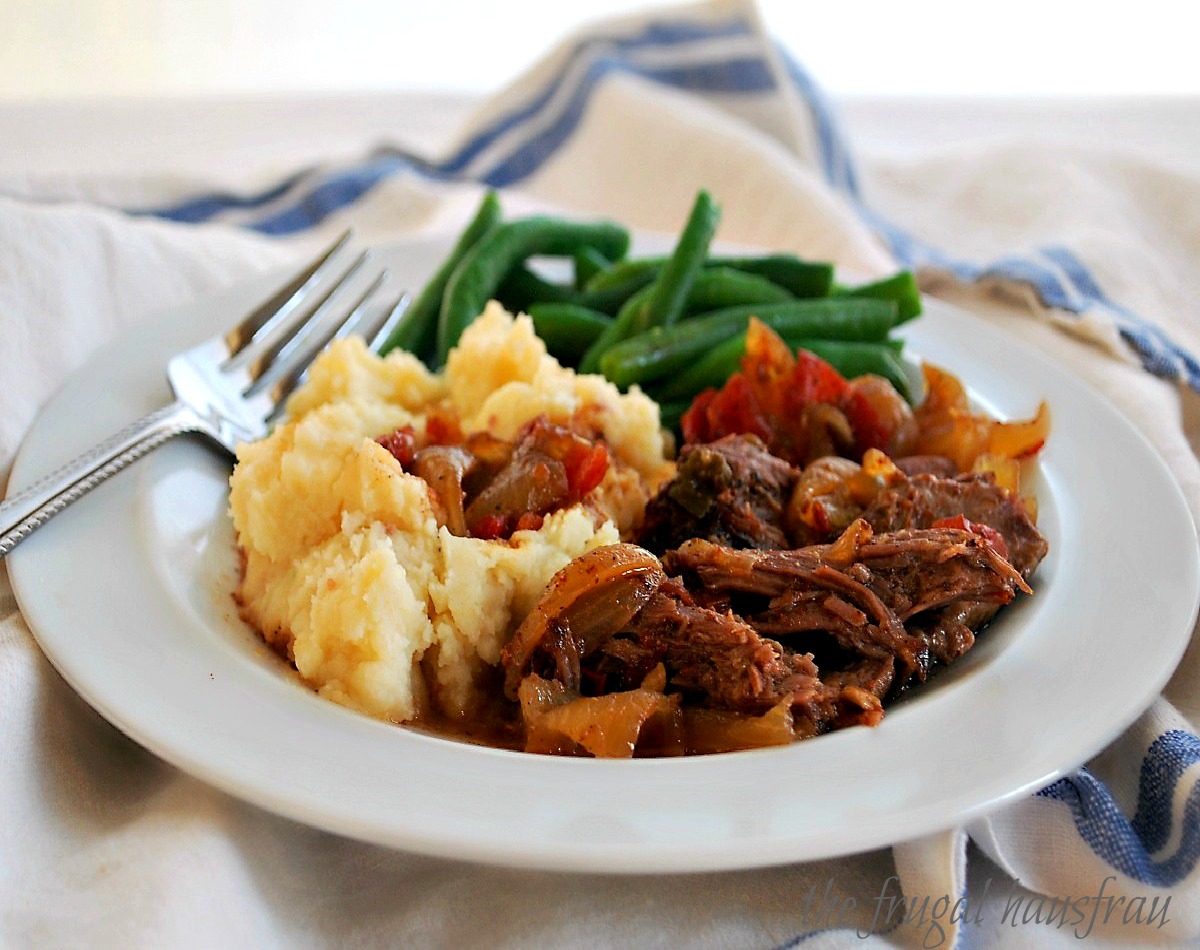 If you’re looking for a simple dinner with flavor to die for, this is the one. Mexican Pot Roast. Perfect for a family, easy to make and a bounty of succulent, tender meat for dinner (and if there’s any left) some of the best leftovers, ever.

This is a fabulous dinner with just enough spice to make it interesting, so it’s super versatile. And you can control the heat by using the lesser amounts of chipotle and cayenne in the recipe or if you’re a heat seeker, pass your fave hot sauce at the table.

What you have here is a luscious pot roast cooked to fork-tender along with onions, tomatoes and the spices. I like to chunk up the beef so it swims in the gorgeous sauce that forms as the roast cooks. We served this pot roast with all the saucy juices over mashed potatoes the first night. Why I don’t know because it seems a distinctly Midwestern thing to do, but we loved it. It was kind of like a Mexican Swiss Steak!

If you’re thinking mashed isn’t your style with the Mexican spices, this would be marvelous with polenta or grits. Both are corn products and I can’t help but think that either would be kind of a nod to Mexican cuisine.

I shredded the leftover Mexican Pot Roast (which was even better the next day after sitting in all that sauce) to refashion the leftovers. Some went on marvelous Navajo (Indian) Tacos and later in the week, we had tostadas. Both of those recipes really only need a little bit of beef so they were a great way to stretch it.

There are all kinds of other potential uses for leftover Mexican Pot Roast. Quesadillas are always popular at our house and f there’s enough, how about an enchilada filling combined with lots of melty cheese?

This recipe couldn’t be easier to make. I like to brown up the pot roast (use a heavy Dutch oven or something that has a tight lid) and I just add the onions right in with the beef to brown alongside when I turn it, then when the beef is browned, in goes the garlic.

The spices are mixed in with the tomatoes and poured over the beef, then a little water is added, down the side so as to not wash all the spices off the beef. Bring everything to a boil, turn down to a bare simmer, cover, and simmer, adjusting as needed for about three to three and a half hours. Do check the water level towards the end; you want everything in that sauce to have reduced but don’t want to risk any scorching.

This really couldn’t be easier to make. When all finished, I do like to chunk up the beef right into the sauce. It’s a great way to flavor all the beef, but also stretches it a little, too.

Much as I love Pot Roast I gotta admit some of these old-school country type meat & potato meals don’t always give the best “bang for your buck,” even though the Chuck is one of the least expensive cuts, sometimes less than ground beef. Shop for your meat well, picking it up when it’s on sale. Watch for great sales in the fall after the beef go to market and in January through February; Christmas is known for big roasts, New Year’s and Valentines are prime holidays when steak is served and often after these holidays, the lesser cuts of beef are plentiful and drop in price.

Dividing a roast like this over several meals is a great strategy to overcome the cost of a potentially pricey cut of meat. Serve it as a “main” the first night, so it’s the star of the show. Then find a dish or two that not only doesn’t feel like a “leftover” but only uses a bit of the main protein. Essentially, you’re dividing the cost of that one potential “budget breaker” roast into three meals, all distinctly delicious in their own right.

If you’re inclined, a bit of this roast, leftover, freezes well, especially with some of the juices. Having a little Mexican Pot Roast in the freezer is like having a stash of gold when you need something fast for dinner, and you won’t be dining on leftovers for days in a row.

Season all sides of the roast with salt and pepper. Add two tablespoons oil to a heavy Dutch oven or other pot that has a tight lid and heat over medium-high heat. Add the roast and sear on all sides until browned, adding the additional olive oil as needed.

When the roast is turned, add the onion and cook for several minutes right alongside the roast, stirring now and then, then when the roast has browned nicely, add the garlic and cook till fragrant, about a minute. Mix together the tomatoes, chipotle chili, cayenne, and ground cumin and dump it over the roast. Add enough water (go down the side of the pan so you don’t wash the vegetables and spices off the meat) to nearly come to the top of the roast. Bring to a boil, reduce to a low simmer and cover tightly.

Continue to simmer very slowly for three to three and a half hours, checking the liquid level towards the end so the sauce (which should be nicely reduced) does not dry out, until the roast is fork-tender. Let the meat cool a bit and gently break it into chunks and return to the sauce.

I’ll be joining the folks over at Fiesta Friday with this recipe. Cohosting this week are Zeba @ Food For The Soul and Jhuls @ The Not So Creative Cook.