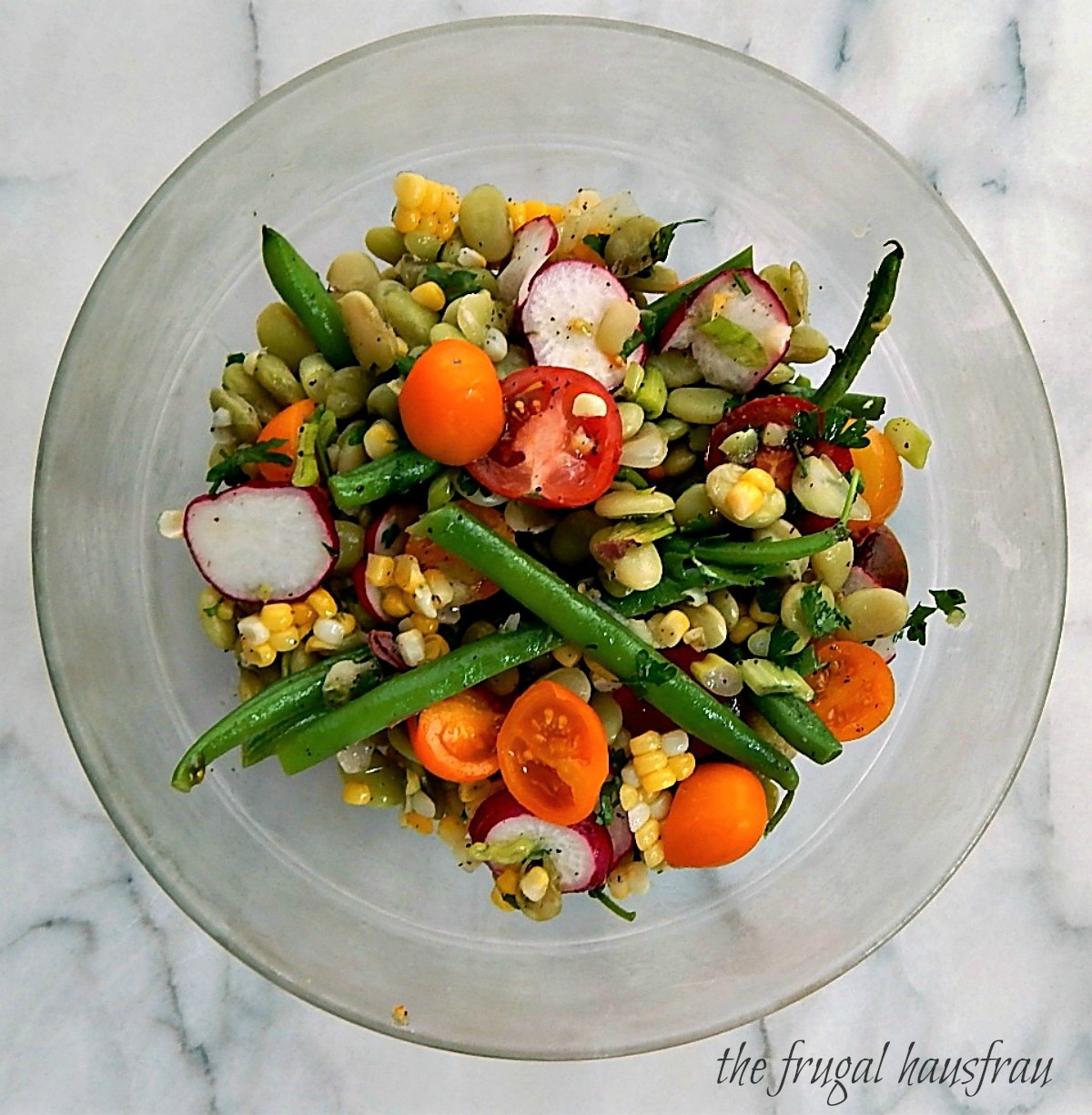 I had to adapt his recipe a bit (sorry Chef) but kept in everything good and retained those Southern roots – there are corn and baby limas, fresh green beans, and garden-fresh tomatoes. A few radishes add a crunch and a home-made vinaigrette (based on broth) drives those flavors home.

In his original recipe, the chef doctored up some chicken broth with a piece of country ham as a shortcut. Since I never have country ham just hanging around, but I usually have a ham bone, hock or ham broth stashed in the freezer, I changed things up.

I made ham broth using my homemade ham stock recipe, then simmered the limas in that rich broth and let them sit. Really, for the flavor, making the broth is SO worth it (and then you’ll have broth for soup later, too.) The broth gives a hit of salty sweetness that is beautifully balanced by the bite of the brash cider vinegar.

I know making ham stock for a salad is a lot of work, and most people aren’t going to be all about it. Maybe next time you make ham stock set aside a couple of small packets in your freezer for this salad. If you don’t have a ham bone (or broth) or country ham, think about using some bacon drippings in the dressing to replace some of the olive oil. Maybe you have a powdered or other instant stock to use; you can try that, too.

I went full on Lima bean in my recipe and left out the Fava beans that were in the original recipe – I mean really, the combo of the two beans seemed a bit strange and Fava beans (pricey little things) just didn’t seem to follow the country roots of the recipe. What I ended up with was a masterpiece! This is truly a fave now at our house!

Summer Bean Salad – since the beans are cooked, this is ideal for leftover beans.

In a pot, bring the ham broth to a boil. Add the lima beans, cook until tender (15 to 20 minutes) remove from the heat and let cool in the cooking liquid for 1 hour. Set a fine sieve over a large bowl and strain the beans. Transfer the beans to a serving bowl to cool. Set aside 1/3 cup of the cooking liquid to cool.

Reheat the broth to a simmer and add in the green beans. Cook until crisp tender, remove from liquid and add to the lima beans. Reserve the broth for another use.

Add the corn and remaining vegetables to the bowl with the lima & green beans. Top with the parsley.

In a jar, add reserved 1/3 cup ham broth, olive oil and vinegar along with salt and pepper and red pepper flakes. Shake well and drizzle over vegetables. Gently toss, taste for flavor and add more salt and pepper as desired.

Note: If you don’t want to make a ham broth for this recipe, the original recipe says to take 2 quarts of chicken broth and in a large pot, combine the stock with 1/3 cup of olive oil, 1 tablespoon of salt and 1 teaspoon of black pepper. Add a 2 ounce piece of country ham, optional, and the crushed red pepper and bring to a boil. Reduce the heat to moderately low and simmer for 15 minutes. Then proceed with the recipe.

I’ll be posting this recipe to Angie’s Fiesta Friday #184, hosted this week by  Petra @ Food Eat Love and Jhuls @ The Not So Creative Cook.