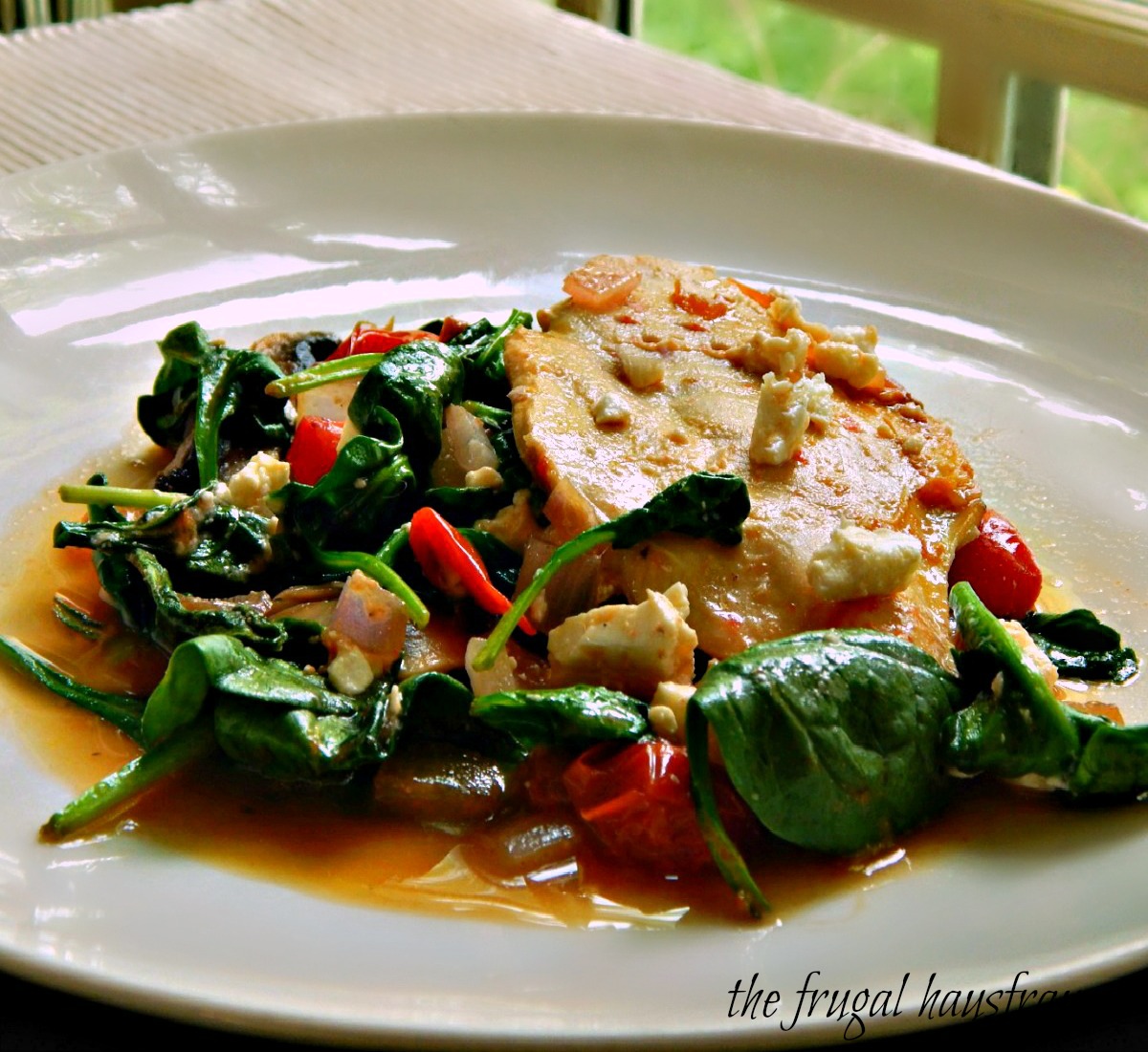 I watched an episode of Diner’s Drive-Ins & Dives the other day, Land to Sea and they featured the Black Pelican Oceanfront Cafe in Kittyhawk, North Carolina. I was wowed by the Black Pelican Citrus Rosemary Brined Chicken with a Saute of Vegetables, and I couldn’t get it off my mind. Of course, I looked for the recipe and couldn’t help be bummed that it wasn’t one of the recipes given on the DDD website.

Luckily I was able to rewind and following along, came up with a pretty reasonable version. Now when I say reasonable, I think I’ve come up with a recipe where the chicken breast carries all the flavor of that citrusy brine and is accompanied with that lovely medley of red onion, cherry tomatoes, mushrooms, and spinach. It even has the finishing touch of a bit of sharp Feta over the top. I wish my photos did this beautiful dish justice!

This isn’t exactly like the Black Pelican Citrus Rosemary Brined Chicken. What I haven’t included in the recipe is the Airline Breast that the Black Pelican used; an airline breast is something most of us home cooks just don’t see (that’s a chicken breast with the first wing joint attached) and I did skip the way the Black Pelican marked the breast on the grill, then finished it off. I just didn’t want to go outside to the grill or dirty a grill pan.

I subbed in chicken cutlets to make this a quick cooking dinner. It takes about 15 minutes to toss together, minus the brining. All of the flavor, a fraction of the time! While the Black Pelican served their Black Pelican Citrus Rosemary Brined Chicken with Smoked Gouda Mashed Potatoes and Demi-Glace spooned around, I just wanted to go healthier and lighter and I serve just the Chicken and the Vegetable Saute. It’s fantastic.

Actually, that whole combination of flavors, the Citrus Brined Chicken, the Smoked Gouda Mashed Potatoes and the Demi-glace seemed so odd that I gave it a try one day, long after I initially posted this recipe. I figured it had to be either crazy or crazy good but I prefer the simpler version. To each his own, I guess! I used the Cook’s Illustrated Cheater’s Demi-Glace if you want to give it a try. If I wanted a carby type of a side, instead of mashed potatoes, I think I’d emphasize the Greek leanings of the dish and serve it with a simple rice pilaf or orzo, maybe quinoa or crispy, roasted potatoes.

Note that the chicken is marinated overnight, so plan accordingly for the best flavor. Then it’s simply the matter of sauteeing the chicken and setting it aside, then proceeding with the vegetables and a final spritz from the reserved citrus. The veggies cook quickly; it’s pretty much a stir-fry. When finished, the Feta sprinkled over gives it such a nice bite and wakes up all those flavors.

I took photos of this dish twice when I made it, in the initial ones, the chicken didn’t even look like chicken but it does show how juicy the veggies are. I made another stab at it when a made the dish another time. The chicken looks better but you don’t really get how juicy the dish is since I used a deeper platter. There is a lot of very thin delicious “sauce.”

This is a gorgeous dish and there’s no reason not to go with your favorite vegetables or your favorite cheese, for that matter as long as you are making it at home. Who knows, I might toss in a bit of zucchini next time or some bell peppers. Maybe I’ll sprinkle it with little chunks of goat cheese instead of the Feta.

The cost of this dinner for four ran about $7.00, made just as shown. Never pay full price for chicken – it goes on sale too often. Stock up when it’s at a low and break down into sizes that work for your family and freeze.

Generally, there is some sale on citrus in my area every few weeks; I try to pick up extra when it’s on sale. Make sure to keep it bagged and check after you’ve refrigerated it for condensation. If there is any condensation, turn the bag inside out and return the citrus to the bag.

As far as the spinach, don’t fall for the bags; they’re generally 4 to 10 times the price per pound as the loose spinach. It’s hard to compare; the bags are priced in ounces the loose in pounds. You can easily shave a buck or so just by subbing in cut tomato for the cherry, maybe more depending on the time of year. As far as the mushrooms go, when you get them home, turn them over and poke a few holes in the bottom of the package. That gets them out of the condensation and they’ll keep longer stored upside down like that. Watch for mushrooms on sale around holidays.

Juice the citrus halves that aren’t reserved for the final dish, below, and add rinds and juice into a medium-sized bowl. Add the rest of the ingredients, mix, cover and refrigerate overnight.

Add olive oil to a large skillet and heat over medium-high heat. Remove cutlets, discard brine, pat chicken dry and cook two to three minutes per side until cooked through. Remove, cover and reserve.

Add onion and cook for two to three minutes until starts to soften. Add mushroom and cook until golden brown, stirring now and then three to four minutes. Toss in cherry tomatoes and cook until slightly wilted, a minute or so. Squeeze juice from the reserved citrus overall and add in any juices from the chicken. Add spinach, toss and cook until only slightly wilted, tossing with tongs. Aadd a lid for a minute if needed. Keep in mind that spinach will continue to cook and wilt from the heat of the dish after the pan is removed from the heat. Taste and add salt and pepper as desired.

Add chicken to plate or platter, surround with vegetables and saucer. Garnish with Feta.