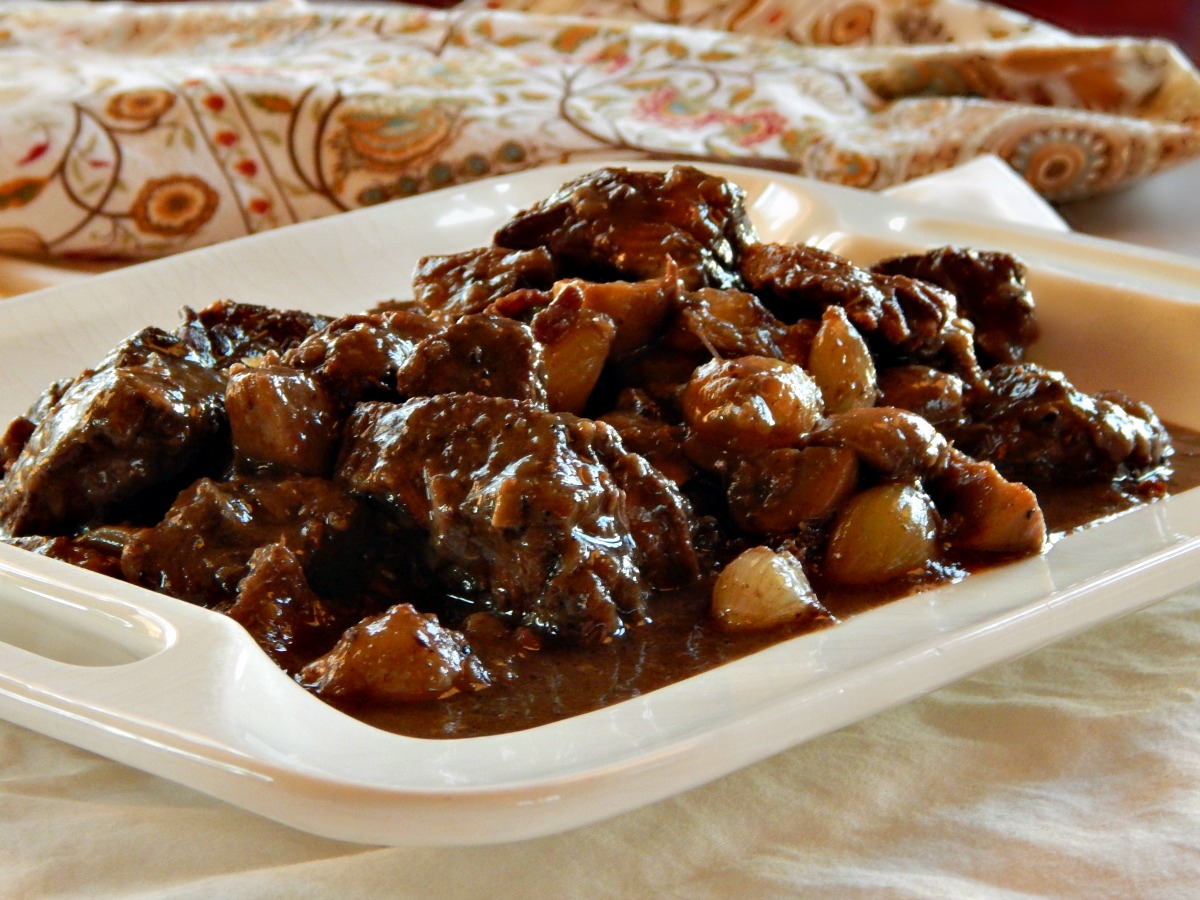 I don’t know about you guys, but I’m crazy about stew. I just love it on a cold wintery day, cooking low and slow and if it’s fogging over the windows as it slowly braises, even better. I think it adds to the whole ambiance! I have several fave stews but of all of them, this is hands down the one I crave the most. It’s my Beef Stew with Wine (or not) and Bacon.

Beef Stew with Wine (or not) and Bacon. Serve over mashed or noodles.

I’ll find just about any excuse to make stew (and usually a storm or a snow day is one of them) and usually, there are potatoes in them or they’re served over potatoes; what can I say, I’m a Midwest girl at heart. This stew is the exception. Because it’s so much like Boeuf Bourguignon, it usually goes over noodles. It just seems right. But you do you.

About Beef Stew with Wine (or not) and Bacon:

I think I hit above why I like a stew so much (and I should post more of them) because I usually make them on cold snowy days when we’re around the house, usually snowed in. It makes me think of my son (or before him my daughter, and before they were old enough, me) shoveling outside in the fresh cold air, the snow pristine and then coming into the warmth, shaking and stamping off the snow, cheeks red and feeling alive. Feeling that we’d accomplished something. And loving that because of the snow, we don’t really have to do anything or be anywhere, unless it’s down to the park on foot, dragging the sleds behind. Big snow days in Minnesota are like bonus days.

When you’re snowed in, time is suspended, and even sounds are muffled (well, except the plow, snow blowers and kids playing) and you’re in your own little world. That’s the best time to slowly braise this stew in the oven and maybe even bake off some bread to go with it. Something like my Crusty Bread if you’ve planned ahead. And for an afternoon, at least, maybe with the fireplace going and a board game out, all is right with the world.

I do think this stew is best in the oven and you don’t need a snow day, but you do need a good chunk of time, around three hours or so. You’re gonna be so rewarded! Whether you use wine or not, you’re gonna have an absolutely stellar stew, reminiscent of Boeuf Bourguignon w/o having to use the whole bottle. Isn’t that the best when you have your stew and maybe just a bit of wine left to share at dinner?

Making Beef Stew with Wine (or not) and Bacon:

This stew builds layer on layer of flavor (I think it was adapted from Cook’s Illustrated, so you know it’s great) starting with the bacon which is rendered and reserved. Then the drippings are divided into two pans (one later to cook the mushrooms) and in the other, the beef is browned in batches (adding a little extra oil or butter as needed) after being tossed in a little salt and pepper, then the chopped garlic goes in.

Once they’re nice and softened, you’ll build your gravy, starting with a roux. Sprinkle flour over the veggies, stir it around as it cooks for a few minutes (that’s the roux, then toss in your wine. Scrape all the browned bits up (that’s the fond, the flavor) as it comes to a boil. In goes in the meat and the bacon, stock, thyme and bay leaves, On goes the lid and you’re home free for about an hour and a half while it braises, but need to cook up the onions and mushrooms when the stew is close to being done.

If you don’t wish to use wine, you’ll add more stock instead of the wine and to give it the rich, dark winey color and the slightly fruity flavor wine adds, put in a little dark jam, preferably not too sweet (avoid the kid’s grape jelly if you can and go for something like a red or black currant or a good blackberry, although in a pinch I have used others) and a tiny bit of vinegar just to take the sweet edge off the jam. Both of those little tricks are in my My Top Super Stealth Arsenal of Ingredients. Hey, no one’s ever called me dramatic (eye-roll).

And of course, don’t forget to cook your little baby onions up according to the package directions (frozen onions are so helpful); I usually just microwave them. And at the same time, saute the mushrooms in those reserved drippings. When the mushrooms are cooked through and delish, take them out and toss the cooked onions in the mushroom pan so they can pick up some golden brown color. Then everything goes in the pot, the mushrooms, onions and the bacon you’ve set aside, to bubble away and blend all the flavors, about 30 minutes or so.

Saving Money on Beef Stew with Wine (or not) and Bacon:

A good beef stew is never inexpensive to make and this one isn’t an exception. Serve it with lots of potatoes or noodles to help stretch it, some good bread or rolls, and a lovely salad preceding the meal doesn’t hurt. It’s a bit of a help that it only uses a little wine, and of course, it’s a bit less expensive if the no alcohol version is used. I often keep a “hands off” jar of dark jam I use mainly for cooking in the fridge; the fancier jars of red or black current or blackberry tend to cost a bit more. Watch for jams at a low in late summer to early fall when the warehouses are full and they’re priced to move.

This is a full eight servings, though I have a hard time controlling one of my kids (you know who you are) who could likely finish off the pot by himself! It’s a large stew, a little pricey and could hardly be called a bargain meal unless sit’s served more than once. I try to set a little aside to make my Shepherd’s Pie (photo above) with leftovers; check the recipe if you want (I often make it with leftover pot roast and gravy but stew is just fine, too) but basically it amounts to placing the stew in the bottom of an ovenproof skillet or casserole, adding a few peas if we feel like it, maybe some carrots, topping wth mashed potatoes (we like ours with cheese) and baking. “Leftovers” that are just as good or even better than the original meal are a great way to maximize a pricier dinner.

Beef Stew with Wine (or not) and Bacon

Serve with a green salad before, lots of noodles or mashed potatoes and a nice bread or rolls to sop up the gravy and you’ll have a stellar meal! Try to save a little back if you wan to make Shepherd’s Pie with the leftovers!

Preheat oven to 300 degrees. Fry bacon in a large pot, remove and reserve when done. Remove two tablespoons of the drippings and place in a medium-sized saute pan. Leave the rest of the drippings in the pot.

Sprinkle meat with salt and pepper and brown, half at a time, in remaining drippings. Add a little oil or butter if needed. Thoroughly brown the meat on all sides for best flavor.

Remove meat, set aside and saute onion in same pan for four to five minutes until softened. Add garlic and saute one minute.

Stir in flour and cook till lightly colored, about one to two minutes. Deglaze with wine and bring up to a simmer, scraping up browned bits. (If not using wine, deglaze with the 1 1/2 cups chicken stock.)

Add in the stock (or the rest of stock, vinegar and jelly/jam if not using wine), beef, thyme and bay leaves and bring to a simmer, again. Cover and place in oven for one and a half hours until meat is nearly tender. In the meantime, prepare the mushrooms and onions.

Saute the mushrooms for five to seven minutes in the reserved drippings until soft and tender and slightly browned. Remove the mushrooms and add the onions (already cooked) and saute until browned, about two to three minutes. Add mushrooms and onions to stew, along with the reserved bacon, recover and return to oven and cook another 30 minutes or so, until the meat is tender.

This can be served over noodles or mashed potatoes.