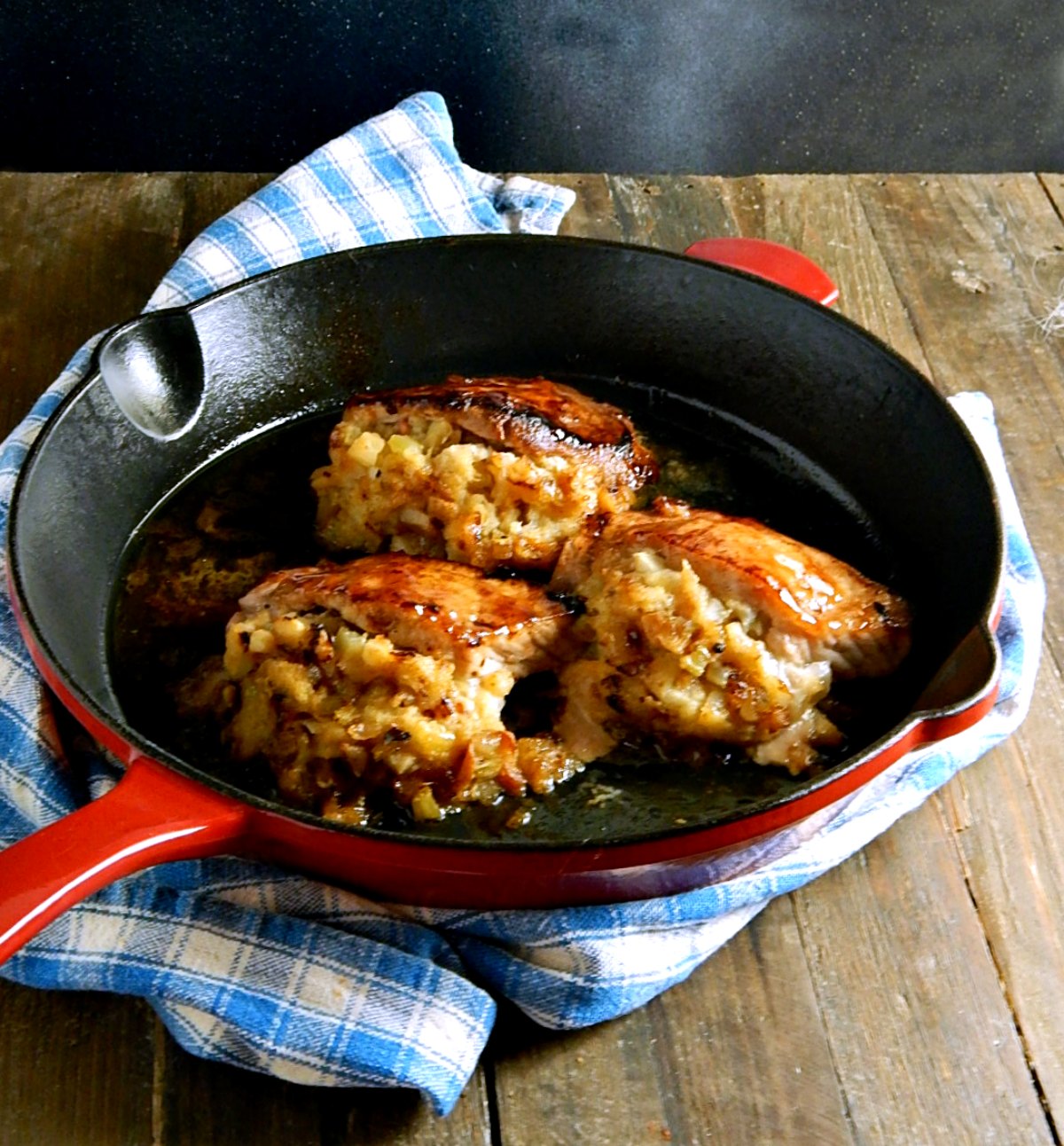 The slightly sweet, slightly tart apple brings out the best in pork, and in the Midwest, applesauce with pork chops is kind of a thing. At home, sometimes we had stuffing with our pork chops (raise your hand if your Mom jumped on the Stove Top Stuffing when it was introduced in 1972.) It’s safe to say, though, we never had a gorgeous dinner like these Apple Glazed Stuffed Pork Chops that combine the best of both worlds!

These beauties (the photo does not do them justice) combine the best of both worlds: stuffing and apples. Originally inspired by Tyler Florence, who uses a similar brine on his Pork Chops and an Apple Stuffing in his Roast Pork, I’ve combined the two in a simplified, more do-able recipe, Apple Glazed Stuffed Pork Chops.

Stuffed Pork Chops are almost always done with chops cut from the loin, the leanest part of the pig. Without a lot of fat, loin chops can run the risk of being a bit dry. Not so with these succulent stuffed chops. The short brine adds both flavor and moisture and the stuffing inside ensures they are moist throughout. The glaze lends beautiful color to the outside of the chop without running the risk of overcooking while trying to get a bit of brownness.

These are one of my favorite “special occasion” dishes for family birthdays or celebrations. They seem so special and elegant but really they’re just everyday ingredients “transformed.” They’re a fave of my son, Kraig, and the last time I made these stuffed pork chops, we ate in the living room.

He set his plate down on the coffee table, stepped back in the kitchen to get hot sauce (I hate that he uses it on everything when I work so hard to make all the flavors just right in my recipes); I was on the other side of the table and before I even had a sec to move, our big old labrador, Gibson jumped up with alarming alacrity, swooped in and grabbed Kraig’s chop, and still moving, in two big gulps swallowed one of the huge chops down..So you can say these are “Lab Approved.”

The kitchen was 10 steps away but as Kraig turned around he shouted out – you let him get my chop? I replied “Let him? Let him? I had no idea he could even move that fast!” Apple Braised Green Cabbage is a perfect foil for these chops, milder than the many of the Red Cabbage Braises so popular today. Not only a bargain side, but the flavors also play off each other beautifully.

I’m always tempted by the stuffed chops I see at the grocery store, but I’ll take you through the simple process of stuffing your own. You’ll have dinner for four for less than the cost of just one lovely store-bought chop.

Don’t be tempted to skip the brine; it really helps keep the loin chops moist. An hour or two is best but even 15 minutes helps. The stuffing can be made while the pork chops brine, then it’s just a matter of quickly browning on one side and baking in the oven (they can be grilled, too, just be really careful while turning not to lose the stuffing) and glazing them now and then. I like to double the stuffing and freeze half; it’s handy then for another meal and could potentially be used for chicken breasts, too. It won’t be enough for a side on its own.

The glaze is apple concentrate, and while it’s optional, I recommend heating it and boiling it for a minute or two to make it dark and sticky; it gives a beautiful color and concentrated flavor. Watch it closely…if you burn it, it will have to be tossed. If you find it’s too thick as it cools, thin with water by the tablespoon.

I’ve never made a gravy or a pan sauce with this recipe, but you could if you really want to take it over the top; a cream gravy would balance out the apple flavor nicely.

An extra step for a gorgeous glaze. Boil the concentrate down to a thick, almost caramel-like consistency.

Put out 12 to 20 bucks and buy a Pork Loin and slice your own chops “to order.” Make an assortment of thicker ones for special meals and thinner ones for quick dinners, package them and stack them in your freezer. (Sharpen your knife first!) You’ll save a ton of money over buying loin chops at the store. Precut chops in my store run $4.99 or more per pound regular price, $2.99 at a great sales price. Pork loins drop to a low of 99 cents a pound in my area, sometimes, but rarely, for less.

Look for apples in the fall at the best price, and watch for them in January and February to lower in cost. In January, the apples in the cold storage need to be sold off quickly, and there is a glut of apples coming out of gassed storage.

When buying wine, really shop the sales and speak to the employees. You’ll be able to find great wines for a pittance if you have a knowledgable wine person. They’ll ask what you’re making and be able to direct you to several options within your price range, many times options you may not have thought of or even know about. (Unless of course, you’re a wine expert, yourself.) Sign up for mailings or emails for their best sales, which are usually in the fall and spring.

As far as apple concentrate, buy this on sale with a coupon. Celery never really seems to go on sale in my area; don’t leave the top open; some swear by wrapping the package in foil; I usually just crimp the top closed with a chip clip and it makes a difference. Onions are cheaper in larger bags; check Aldi, but check closely before you buy. I’ve found some bad onions in their bags before. Store away from potatoes in the dark. Save your onion/celery scraps for stock. In the fridge, if you’ll use within a week or in the freezer for longer; keep adding as you go along until you’re ready to make stock.

In a non aluminum mixing bowl, combine brine ingredients and stir until salt and sugar are dissolved. (Kosher salt is best, but table salt will work because this is a short brine; on longer brines, avoid salt with iodine. Use 2/3rd the amount of the kosher salt if you’re using plain old table salt, in this case 2 tablespoons.

Cut a pocket in the pork chops with a very sharp knife for the stuffing, carefully bringing the pocket as close to the edges of the chop as possible without going through. Place the chop on a flat surface and gently press with the palm of your hand on the top. Cut about a 2 to 2 1/2 inch opening along the side of the chop that isn’t lined with fat – if the whole side of the chop is opened up, the stuffing may fall out, so try to keep the opening small. Take small slicing, sawing motions, continuing to go deeper into the chop, keeping the knife horizontal.

Open the chop and feel inside to make sure you’re getting it open as much as possible. Make the pocket as large as possible, getting into the sides.

Remove chops from the brine and quickly rinse, then pat dry inside and out. Discard brine. Stuff each chop firmly with a quarter of the stuffing mixture.

Heat oven to 350 degrees. In an oven proof skillet, lightly brown one side of the chops in a little olive oilr, turn over and glaze with the apple concentrate. Place in oven and bake, uncovered, until chops are cooked through and center of stuffing is hot. Stuffing should register 160 degrees. Baste chops with apple concentrate every 10 minutes.

Total baking will be 20 to 30 minutes for boneless, 35 – 40 minutes for bone-in. Depending on how thick the chops are and how much they were browned, and how hot the oven is, they can be done several minutes earlier – the oven thermometer is your best bet in getting the chops at just the right temperature.

Drizzle the pan drippings left in the pan over the chops before serving.

Prepare grill for indirect heat. Place stuffed chops on grate away from heat. Cover grill and cook until chops are cooked through and center of stuffing is hot. (It should read 160 degrees on thermometer.) Baste with apple concentrate every 10 minutes. Cooking time will be 25 to 35 minutes for boneless, 40 to 50 minutes for bone-in.