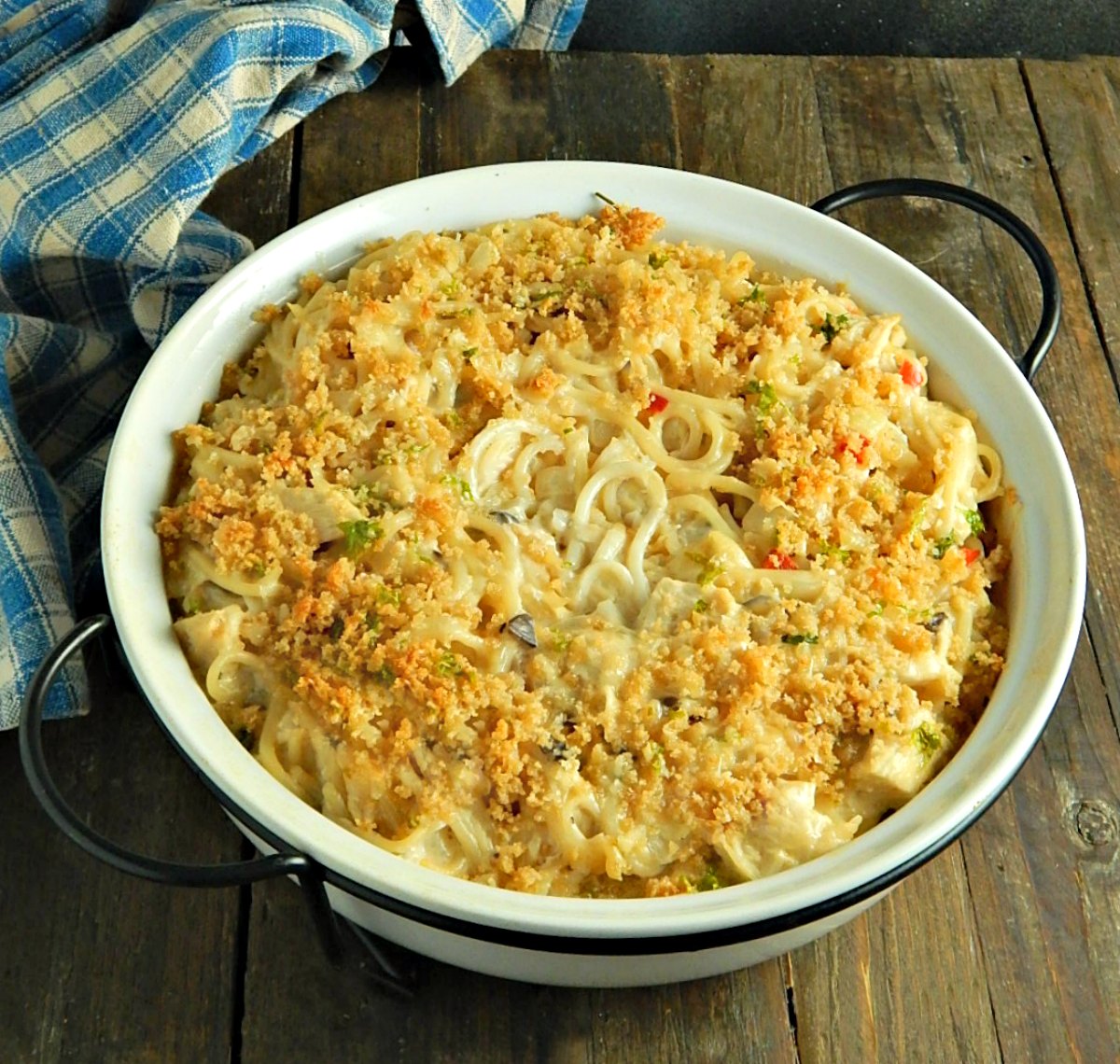 Turkey Tetrazzini, a creamy turkey and pasta casserole is like a little black dress; it never really goes out of style. Developed by a chef for a favorite Opera singer, the name Tetrazzini, might sound all fancy, but the flavors are familiar. And it’s always a crowd-pleaser.

There’s another dish that kind of morphed off this one, Chicken Spaghetti. The first time that came on my radar, I was like, “Whoa, that’s Tetrazzini!” It seems like more liberties are usually taken with Chicken Spaghetti (it can be really over the top with lots of cheese & add-ins) while Tetrazzini has pretty much stayed the same old classic recipe it’s always been.

So if you’ve never had Tetrazzini, its pure comfort food. It’s a gorgeous, silky dish of spaghetti, linguine or fettuccine, and usually, these days, turkey. It’s often made with leftover Turkey in the days following Thanksgiving. It really is fabulous, creamy and subtle with just a little touch of Sherry. The ingredients don’t sound like much on their own, but the bit of sherry elevates the Tetrazzini.

And when I said that Tetrazzini has remained classic, I gotta say this dish is usually made these days with a can of cream of mushroom soup, something that original Chef probably didn’t use. Hey, I wasn’t in the kitchen with him, but I’d say that’s a pretty close guess! That might not be so classic but it makes it very easy.

This dish is really good with the canned soup, but it’s not that big of a deal to make just the right amount of white sauce to sub in for that canned soup if you’re opposed to it or can’t eat it for any reason. My Cream of Anything Soup can go in the Tetrazinni instead, along with a few mushrooms sauteed in butter, for a kind of upgraded version. On its own, Tetrazzini is light on the vegetables; be sure to serve it with a side (a green vegetable like asparagus or broccoli would be great) and/or a good salad.

As is, with the canned soup, this is a great “learner” dish to show your kids on the days following Thanksgiving when they’re home from school; it’s actually one of my 12 Days of Turkey postings, a compilation of about 40 great recipes to make with leftover Holiday Turkey. Tetrazzini is just as good with any leftover chicken, too. And hey, do you ever have any leftover spaghetti, fettuccine or linguine hanging around in the fridge? Try this!

No leftover Turkey or Chicken for this recipe? Simply simmer about eight ounces to a pound of turkey or chicken breast in water for about 10 to 12 minutes until cooked through. Remove and cool until it can be handled, then cube or shred. Don’t discard the water right away; instead, use a 1/2 cup of it for the water called for in the recipe if you aren’t using milk.

If you like the idea of the pimento for a little bit of taste and color, but don’t normally have it on hand, try a little bell pepper, either roasted bell pepper added when all the ingredients are tossed together or plain old bell pepper sauteed with the onions.

To Substitute a Homemade Sauce for the Canned Soup in Turkey Tetrazzini:

If you would like to make Tetrazzini without the canned soup, leave the canned soup out. Then saute anywhere from 4 to 8 ounces of mushrooms, diced or sliced, along with the onion in the recipe.

Sprinkle two tablespoons flour over the vegetables once they are tender, cook for a minute or two, stirring, so the flour will lose it’s “raw” taste. Slowly, while stirring, add in 1 1/2 cups of milk and stir, simmering until the mixture has thickened and coats the back of a spoon. Then proceed with the rest of the recipe, but make sure to add a generous amount of salt and pepper.

To Freeze and Reheat:

Turkey Tetrazzini freezes very well when using the Cream Soup version, not so well if substituting. It’s a great recipe to double and freeze. Line your casserole with foil, leaving a good amount hanging over to fold over once frozen. Fill and freeze. Put the breadcrumb topping in a small Ziploc. After the casserole is frozen, remove from the casserole, wrap the Ziploc with the topping and the casserole in a second layer of foil and label. (It’s never a bad idea to include instructions for reheating.)

To reheat, remove from oven, place back in the original casserole and that overnight in the fridge. Uncover when ready to bake and sprinkle with topping. Bake for 20 to 25 minutes until hot throughout. If still slightly frozen when put in the oven it may need a bit more time.

Very inexpensive to make, the casserole can be brought to the table for “song.” I couldn’t help myself since this was named after an Opera singer, after all. Aw, forget I said it! This is really brought in at a budget since it’s based on using leftovers for the poultry, which hopefully you picked up on sale in the first place.

While Canned Soup isn’t horribly expensive, it’s usually a savings to use the option with the butter, flour, and milk instead. If you do use canned soup regularly, watch for it on sale, especially around the Thanksgiving and Christmas holidays. Use coupons if you have them (they’ll be lots around that holiday season, electronic and paper) and stock up for the year. Seriously. The price will never be better.

Watch for cheese on special; regular old grocery store cheese goes on sale often, so there is never any sense in paying full price. It keeps for weeks, unopened in the fridge, and can be frozen if necessary. Once frozen the texture changes; it becomes crumbly but it’s fine for casseroles like this.

Saute onion in butter till tender. Blend in soup, sour cream or yogurt, milk or water, cheese, and sherry. Heat through. Add in the pimento if using, then toss in the turkey or chicken. Stir gently to coat. Add in the pasta and toss gently, quickly. It will look pretty “soupy.” Taste and add salt if desired.

Turn the contents of the pan into a greased casserole. Sprinkle with bread crumb topping, if using, and bake at 350 degrees for 15 – 20 minutes.

Bread Crumb Topping: In a small bowl, mix together the breadcrumbs, Parmesan cheese, and melted butter. Stir in parsley.

Note: See the additional hints on the page for cooking chicken or turkey for this recipe and for replacing the canned soup with a homemade version.