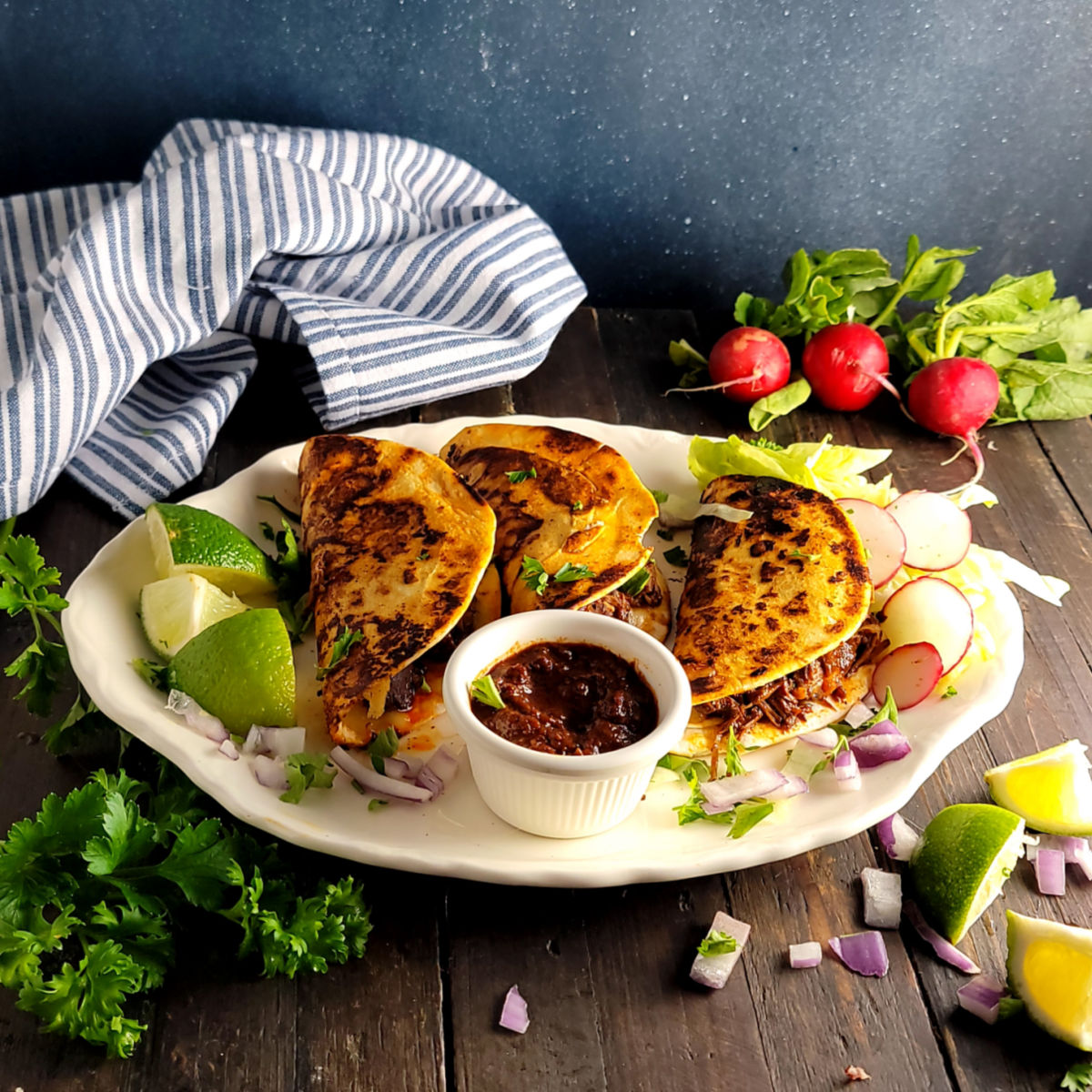 Birria de Res & Birria Tacos have been trending all over the place in the last couple of years and for good reason. If they’re not on your radar yet, Birria de Res is a classic, a Mexican “stew” of beef, slowly cooked, earthy, rich, fragrant, and just a little spicy. And the tacos made from it? Out of this world crazy delish.

It was two teenagers that bought Birria north of the border and took it next level! They turned that guisado (stew) into quesabirrias, basically the birria beef and melted cheese in a tortilla, the Birria taco. But they didn’t stop there. They went all extra: they dipped the tortilla into the juices floating on top of the stew before filling then griddled the tacos, searing that flavor into the tortillas, making the tacos slightly crispy and melting that cheese. And just for good measure, they took those same juices and served them as a dipping sauce. That they called “consomme.”

You can read all about their story and the story of the Birria Taco on Eater. It’s the stuff that the American struggle and American dream are made of. But speaking of dreams, I made these with a friend last weekend (yes, I have a friend now in Georgia, lol!) and I am dreaming about making these Birria tacos again and again and again!

You can’t go wrong with these tacos, except the dipping and griddling are a little fussy. The stew is perfect to make ahead and like most stews and chilis, will only get better with a little time in the fridge. All the accompaniments can be prepped ahead. And if you have an actual griddle, you can turn these out pretty fast.

The stew portion is easy to make but does have a few steps. First, cut your beef and marinate it in a mixture of vinegar, salt, and pepper. It can be done right in the pot you’ll cook in. You’ll want to cut off the excess fat or any sinewy fat, but do leave some of the softer fat and marbling so the tortillas can be dipped into it. (It will float to the top of the finished stew.)

Now, if you’ve ventured into Mexican and Southwestern cooking, or if you follow my site, you might be familiar with a time-honored technique used in many recipes, where the chilis, spices, and/or vegetables are cooked, usually toasted or roasted, and then blended into a sauce. In this case, it’s an adobo sauce. For this recipe:

A few of my fave recipes on this site use this toasting and/or roasting and blending method, so I hafta give a shameless plug! This Pueblan Style Chicken Tinga is a fave. You can never go wrong with this Puerco con Chili Verde. My Fire Roasted Salsa is fabulous. A very similar dish to Birria de Res is New Mexican Carne Adovada.

I chose three peppers in this recipe, partially for the flavors they add, partially because I’ve seen other recipes that use this combo, but I gotta admit, in part because they are all readily available in most areas. You’ll be able to find the powders for the three chiles in some areas and online, but more of that in substitutions.

If other chiles suit you, feel free to use what you like!

Vary your heat level with the number of Chile de Arbols you use. I chose six which was just right for me. I like a bit of heat but I don’t go for over-the-top heroics if you know what I mean! My partner in crime broke out in a bit of a sweat but I noticed he used quite a bit of the dipping sauce, whereas I didn’t, and that’s where most of the heat is.

Remember, you can’t take away the heat (although the cheese does help mellow it a bit) but you can always add salsa or hot sauce to your portion. In retrospect, I suppose if you do go way too over the top, you could remove some of the heat by rinsing the sauce off the beef but what’s the point of that? Remember, too, with almost any dish containing chiles, especially dried ones, the heat often intensifies with storing so it may taste hotter the next day.

It took a few tries to find a method we felt really worked for griddling the tacos, and I still think maybe we should have used a little extra oil to really get a good crisp. I probably went a bit overboard when trimming the beef and removed too much fat. We used as a preference flour tortillas, but the same method applies to corn.

I highly recommend a griddle, stovetop, or electric for these tacos! Doing this in a large skillet will work but will take a bit more fussing and moving and the tacos will be a bit harder to manage.

How to doctor up canned refried beans

The accompaniments are so important; the cheese just “makes” the taco and everything else adds a fresh vibe to the dish! Especially important, IMHO, is the lime! The bit of acid is a game changer!

What to serve with the Birria Tacos (or the Birria de Res? My vote for the tacos is rice and beans. You could make my Arroz Verde (Green Rice), my Restaurant Style Red Rice, an Instant Pot Red Rice and/or my Instant Pot Refried Beans or simply doctor up canned refried beans to make them taste more like a restaurant’s.

For the stew, you could do the same, but make sure to have warmed tortillas on the side. Being in Georgia now, I can’t stop thinking how good that stew would be with my Instant Pot Polenta or my Simple Cheesy Grits. Just sayin’!

Birria was originally made with goat or lamb, while Birria tacos are usually made with beef. I can see this made with pork shoulder rather than beef, the price would be lower and you’d have lots of lovely (or deadly, lol, if you look at it that way) fat to dip your tortillas in.

When using beef, chuck is my choice, brisket would be amazing. If budget allows, using a beef with bones (like short ribs) in addition the chuck makes for an amazing combination.

Now I mentioned using powdered forms of the chiles (and spices) rather than taking the time to toast your own. I haven’t tried the recipe using powders but I have made my own “single” chile powders (as opposed to “chili powder” that you buy in the store) before. I’m curious, and if you are, I can get you in the ballpark amount-wise if you’d like to give it a go.

How to Store Leftover Birria de Res & What to Do with It!

Store your leftover Birria de Res in an airtight container in the fridge for three to five days. Know two things: it may intensify a bit in flavor with storage and the stew may thicken up. If it becomes too thick, add a little water.

If you’re “over” the tacos, use any leftover beef for the now-famous Birria Ramen (I don’t have a recipe, you’ll have to search one up) or on a quesadilla. Try going Chipotle Mexican Grill style and roll some of the meat and sauce up with rice and beans in a big, fat burrito. I would just die for some of the meat to layer into a pile of Nachos with lots of cheese & pickled jalapenos!

This recipe uses a good amount of chuck (brisket would be excellent, too, but even pricier) so watch for the sales! I paid nearly twice as much this time because I went backward (for me). Usually, I pick items like chuck roasts up when the sales hit and then decide to make something with it. This time, the craving hit, and then I was stuck paying full price.

All the “Mexican” type items, from the chiles to the tortillas are best bought at a Mexican or Latin American market if you have one in your area. If not, pay attention to the demographics in your area. A store out in the burbs might be a lot pricier and may not carry all the items you need. A store, even in the same chain, that caters to a wider range of customers would be a better bet.

I thought these would make a perfect treat, too, maybe for the Superbowl this year, if only I’d gotten this post out earlier. Birria de Res & Birria Tacos are def an LA favorite but these are good anytime, anywhere!

So how about you? Are you rooting for the Los Angeles Rams or the underdog, the Cincinnati Bengals? Or maybe you’re just all about the halftime, the food, and/or the commercials? I gotta admit I’m always a sucker for the Budweiser horses, especially when they include the labradors! Here’s the Superbowl 2022 Clydesdales commercial.

For the Birria de Res

When ready to cook, preheat oven to 350 degrees F.

Marinate the beef: Add beef to cooking pot, drizzle with vinegar and add a liberal amount of salt and pepper. Toss to combine.

Add the cinnamon, cloves and allspice to blender and pulse to break down.

Place the onion, tomatoes, and garlic on a foil-lined sheet pan and place under broiler. Broil, turning as necessary, and remove items when softened and slightly charred.

In the meantime, heat a large skillet over medium-high heat. Add the Ancho and Guajillo chiles and toast, turning often, until fragrant and beginning to puff. (Some older chiles may not puff but will become more pliable. Place in a bowl, cover with 2 cups of very hot water and add weight to submerge them. Leave for 15 minutes then add to the blender along with the soaking water and blend, pulsing as necessary, to create a homogenous mixture.

Pour mixture over beef, adding enough water to reach the top but not cover the beef. Cover tightly. Place in preheated oven and bake for 2 1/2 to 3 hours until meat holds together but shreds easily. If at any point, the level of the liquid drops low, add a little additional water. If, when finished, the sauce isn’t a pourable consistency, add a little water.

Serve in tacos with some of the juice as a dipping sauce.

Dip one side of tortilla in the juices on the top of the stew and add, coated side down to a griddle set to medium-low heat. Add the cheese (be generous) across the top. Add beef (shredded or in chunks) in a line just off-center. Once the taco begins to brown on the bottom, use a spatula to flip the half without beef over the top of the beef, forming a taco. Continue to cook slowly until the bottom half is crispy and browned, then turn over and cook the other side.

Serve warm with some of the juices from the Birria as a dipping sauce, along with your favorite garnishes.

The number of servings is a guestimate & dependent on how you serve (as a main dish stew or a taco) and how much you serve.