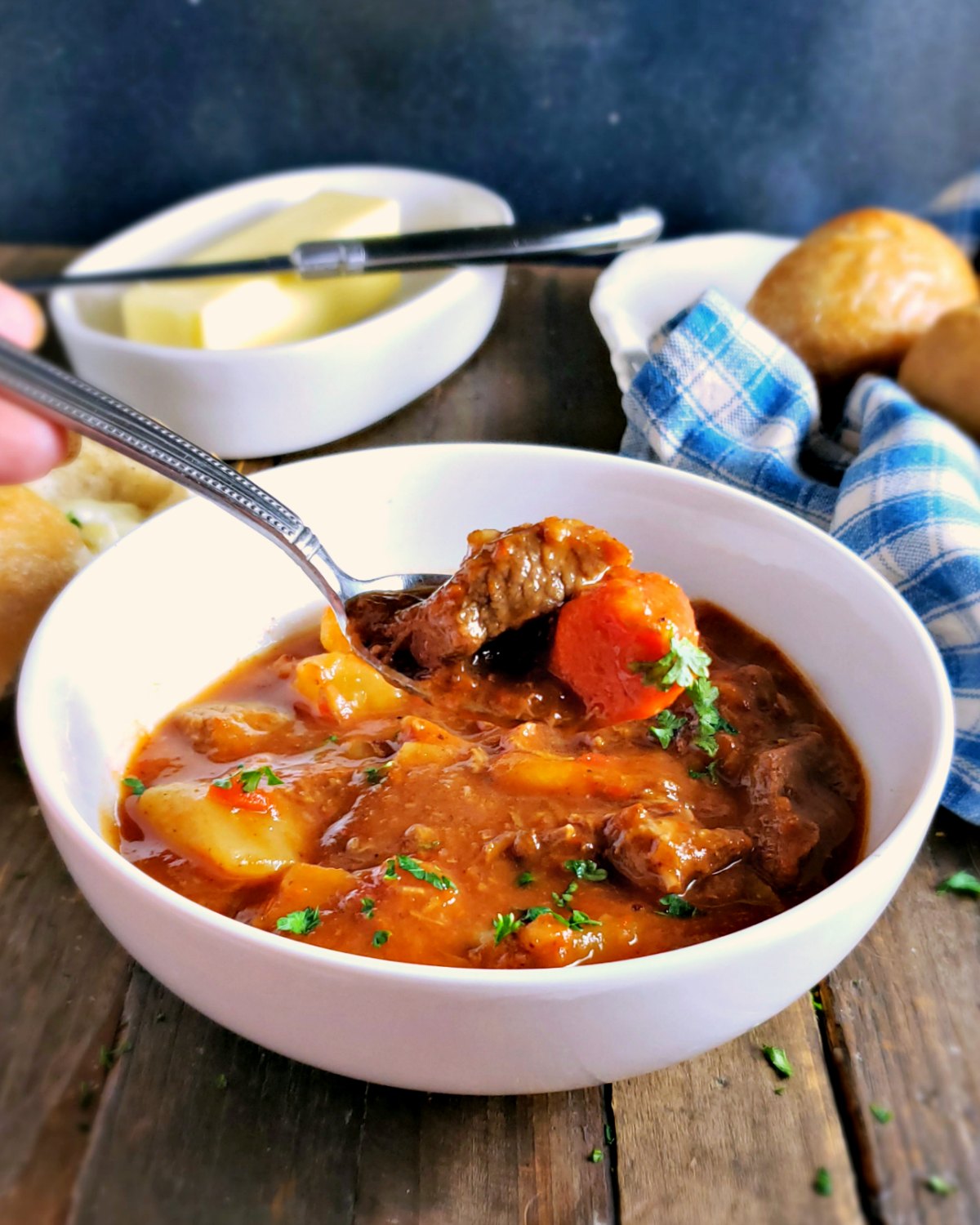 When I was looking for a recipe for the simple stew I grew up with, a friend came through for me, the same friend who passed on what has become our family’s favorite Thanksgiving stuffing. Here’s the recipe for the easiest stew, ever, Old Fashioned Beef Stew. You might see this same stew sometimes called Five Hour Stew and you’ll see why soon enough!

I knew right away that this was exactly the stew I was looking for because it has one key component in it. Tapioca is used to thicken the stew and it adds a beautiful gorgeous shine. I did vary the recipe just a bit over time but not by much!

This really is an old fashioned stew. The kind of stew a family would make to stretch a little beef and get dinner on the table back in the day. It’s the kind of simple, plain down-home cooking I just about crave sometimes! There’s no doubt I do a lot of cooking and am always about finding flavors to tantalize the taste buds, but hey, sometimes you just have to come home and if you can’t do that in person, you just might be able to do it at the dinner table.

What you’re going to find in this stew is beef, salt and pepper and an array of veggies, standard stew veggies, and a good proportion of them. There are the potatoes (which I always think of as the star of the show), onions, carrots, and celery, peas if ya want (I never do!) canned tomatoes, a little salt, and pepper and a touch of sugar. Trust me on that one!. And of course the tapioca.

What you’re not going to find is any wine, bacon, garlic, spices or herbs, Worcestershire sauce, pearl onions, mushrooms or anything “fancy” at all. As much as I love some of the other stews I make (check this Beef Stew with Wine or Not) it’s kind of amazing how good just the taste of food can be, standing on its own.

I can still remember Mom standing me on a chair next to the sink, showing me how to peel the carrots and potatoes for this recipe. I got the peeler, she just used what today we’d probably call a paring knife. Honestly, back then I don’t think she even had so much as a Chef knife or anything that would pass as one! And her little knife was used for everything, and almost everything was held in her hand as she cut (no cutting board) and dropped it right in the pot, with the exception of the beef, which was sliced right on the butcher’s paper.

I don’t think tapioca is as popular in the States it was in the past (unless you’re making bubble tea which is a different type.) So just to clarify, the tapioca that you’ll typically find in an American supermarket comes in a little red & white cardboard box, or at least the only brand I know of does, and you’ll find it right by the jello and puddings. You’ll find standard tapioca which takes longer to cook and Instant tapioca, which is used in this recipe.

And while tapioca is used as a thickener as in this stew, in pies & cobblers & other desserts and sometimes other items as a gluten-free (depending on the tapioca) alternative, it’s also used in tapioca pudding. As a matter of fact, homemade tapioca pudding is pretty amazing, especially if you’ve only had it in the little pudding cups or at a cafeteria before. Maybe it’s time to post a recipe for that, too. It’s surprising how little tapioca is needed for a recipe, but it does keep just about forever in a dark, cool cupboard.

When I say this is a simple stew, I really mean it. All the ingredients are added to the pot and the pot is closed and percolates away, low and slow in the oven until finished, five hours at a low heat. Don’t lift the lid or peak, or at least not until close to the end, and only if you want to check the liquid level, which might be a good idea the first time you make this if your oven isn’t accurate.

There is no browning of the meat (which can be a cut from the round or chuck; I prefer chuck), no sauteing of the vegetables. I suppose you could if you wish, but it kind of goes against the simple, stewed flavor of the recipe. The only thing to keep in mind is that while you don’t have to have perfect cuts, you’ll need to pay a little attention to the size of the veggies so everything is done when the beef has reached that beautiful tender stage.

This stew can be made in the slow cooker, too. I’m not that comfortable leaving my house with the oven on, so I only cook this stew in the oven when I know I’ll be around for the full five hours. The slow cooker does a fabulous job, too, and I feel safe with it bubbling away on my counter. I add a little less water and more time when this is in the slow cooker.

Much as I love Pot Roasts and Stews, I gotta admit some of the old-school country type meat & potato meals don’t always give the best “bang for your buck.” In this case, a more modest amount of meat is stretched with a lot of veggies, which is always a great strategy for keeping in budget. Do shop well for your more inexpensive roasts like chuck or cuts from the round, stocking your freezer when they’re at a low.

Generally, you’ll find the best pricing in the fall as well as a week or two after any Holiday in which more pricy beef cuts are served. That’s usually going to be January and February. After the Christmas roasts and the New Year’s and Valentine’s day steaks are over, something has to be done with the remainder of the beef.

Stretch this meal further, serving with rolls or maybe with grits or over polenta, and squirrel away any leftovers to come back later, maybe as a pie or Shepherd’s pie. It will seem like “more” served in a pie form! Check out my post on Steak Pie, Beef & Guinness Pie or Shepherd’s Pie from Leftover Pot Roast for the methods and timing and just sub your leftover stew in.

Basic veggies like this are generally cheap, most less than a dollar a pound. All are going to be less $ per pound in the larger bags. Keep onions and potatoes separate and store in a dark, cool place. A closed paper bag works well; don’t keep them in plastic if you’ve bought them that way. Carrots go in the fridge, but make sure the bag is ventilated and not sitting in the ridges of your veggie drawer. Turn them around now and then and they’ll stay fresher longer. Simply close the plastic bag over your celery (clip it, staple it, tape it) and it will stay fresher longer.

Shop well for your pantry staples and get in the habit of picking items that you use often like canned tomatoes up at a low whether you need them or not if you aren’t fully stocked; usually, they’ll hit rock bottom pricing once a quarter. You don’t ever want to run out of your basic pantry items and have to pay more.

Place all ingredients, using 2 cups water, in a Dutch oven with a tight fitting lid. Stir together. For easier cleanup, wipe down any residue from stirring that is above the level of the food. Cover and bake without lifting lid for five hours.

Place all ingredients slow cooker, using one cup of water. Mix, cover and cook on low for 8 hours or high for 5 until meat is tender.

Taste before serving and adjust seasoning to taste. If stew seems too thick, feel free to add a little water.

I’ll be sharing at Fiesta Friday #314 hosted this week by Liz @ Spades, Spatulas & Spoons and the at the Weekend Potluck #414 at South Your Mouth. Be sure to stop by if you’d like to catch up on your favorite bloggers in one place every week.