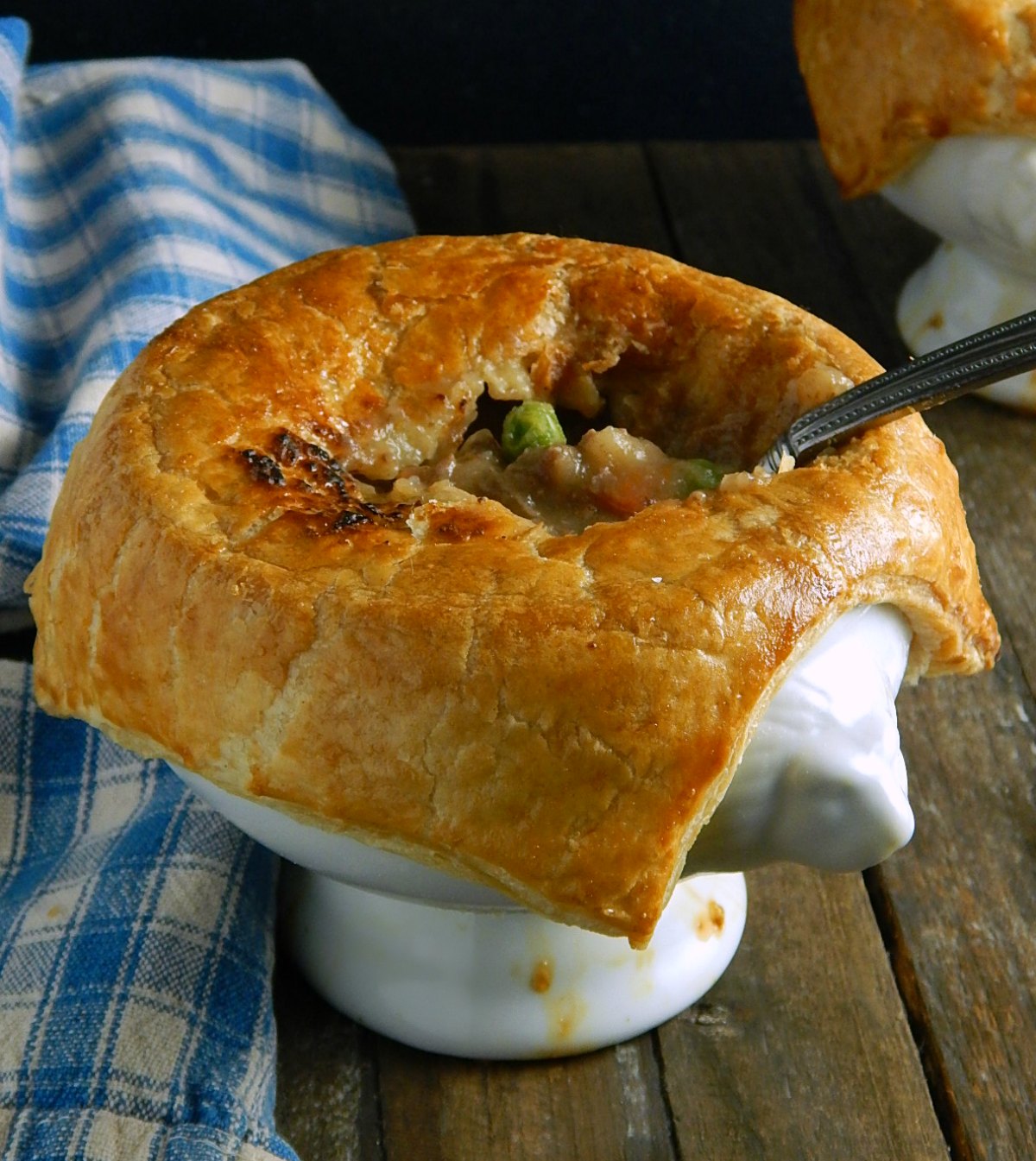 This Beef & Guinness Stew is a wondrous thing – a rich, heady stew that rides the fine line between the richness of the gravy and slight bitterness of the Guinness; a stew that balances so closely neither sweet or bitter is detected; instead all melds into one glorious and delicious concoction. And of course for a special occasion like St. Paddy’s I couldn’t resist taking that stew and turning it into Beef & Guinness Pies.

See, the only thing that can make this stew better is to top it off with rough or a puff pastry!  Of course, that’s only if ya want to, and I know you do! Or maybe that’s just me? Let’s just say if you do, you’ll look like a genius when you bring this to the table!

I’ve made stew for as long as I can remember but never had a “recipe” till I was in my 40’s. I just tossed them together and no two were alike. Then the world of cooking exploded with magazines, shows & the internet. I gotta say, that upped my stew game!

Somewhere along the line, for St. Patrick’s Day, I started making  Beef  Guinness Stew from the Simon Pearce Restaurant. (I might need to move to Vermont just to be by that restaurant. I have several of their recipes on my site, including this Vermont Cheddar Cheese Soup.) It was definitely and still is a fave.

Then my baby Sis told me about another Beef Guinness Stew. She gave me the recipe, wasn’t sure where it originated, but I recognized it as a version of the Cook’s Illustrated Guinness Stew. I dumped the Simon Pearce stew for a while and we became very close friends for a time, the Cook’s stew and I. He never knew, but I cheated, now and then, with others.

If only I could combine the best of all the stews I’ve made in the past, say 45 years or so, including my two faves, and come up with my perfect Guinness stew! Well, that’s what I did.

I’d want it to be an Irish stew that harkens back to my childhood but upgraded.

And yeah, everyone “knows” coz we’ve heard it a zillion times from all the “experts” Irish stew is made from lamb. What all the “experts” are missing is the “nature” of the Irish stew. Just like a string of Irish ancestresses on my Grandma’s side, dwindling back into obscurity did, I’d do just what the Irish have always done. I’d make do with what I could get.

I’d choose inexpensive meat, and a modest amount, which here in the States means beef, not lamb. I’m sure Catherine Therese, Irene Mary Barnett, her mother, my great-grandmother, Elizabeth “Lizzie” Maloney, and her mother, Bridget Foy, would approve. As would Mothers of the men they married, Lizzie’s mother in law, Mary Ann Mead and her mother in law, Bridget Sullivan.

And they’d fill out that stew with veggies, whatever they could get their hands on, to stretch it: a choice or a mix of potatoes, parsnips, rutabagas, turnips, carrots, peas, onions and these days, celery. And they wouldn’t be too particular. The most important thing would be to fill everyone up & preference or taste probably didn’t matter. These days, we’re lucky – we can put in just things we like.

What these ladies might not agree with is the Guinness! Actually, they probably never heard of it and I’m betting they never tasted it, God rest their souls. Even though Guinness was founded in 1759 in Dublin and is as Irish as can be, I do want to note that just dumping some in your stew probably doesn’t make that stew more Irish. It will make it more deep, dark and delicious, though!

There is a potential problem with adding beer to stew, especially a beer as deep and dark and bitter as Guinness. Tasting and adjusting are important with any stew; different ingredients like stocks, vegetables, etc., all affect the balance, but in this stew, the bitterness of the Guinness has got to be dealt with.

I like to add just a touch of a dark jelly or jam. Something like a black currant or blackberry, and in a pinch, even a spoonful of grape. It adds a richness and just a bit of sweet to offset the bitter. You can try a little white or brown sugar, instead but trust me on that jelly or jam!

Now the jelly and the Guinness in a stew might have my ancestresses rolling in their graves. I wish I had them around my table in their frocks with their braids wound around their head, just so I could see their eyes widen as they tried these Beef & Guinness Pies. I’m guessing they’d be in for a big surprise and probably would want seconds!

This stew has to be made ahead because it needs to be cool when the pastry topping is added. That’s a great make-ahead strategy if you want to knock it out a day or two before. Any stew is actually better made ahead, anyway. And note that this stew makes just enough for four servings & the servings will seem a little skimpy & won’t seem like much w/o that pastry.

Besides puff pastry, there are other options for topping your pies: mashed potatoes, garlic mashed potatoes, colcannon, or pie crust. In a pinch, a roll of crescent rolls laid out with the seams pressed together will still be delicious. And I know I’ve been talking about puff pastry, but it might surprise you to find out these Guinness Pot Pies in the photos aren’t made with real Puff Pastry; I used the recipe for my Empanada dough. It’s basically a kind of “rough” puff or cheater’s puff.

Of course, you don’t have to have a topping to make this stew; it can be served on its own but I highly recommend doubling the recipe or more! When I top the stew, I take special care to make sure the beef & all the vegetables are small because that makes it so much easier to eat. When I serve the stew on its own, I leave the beef & veggies chunkier, and since it will take just a little longer to cook, I add just a touch more broth. Just watch the cooking time.

The directions for the puff pastry are important. The space at the top keeps the puff from steaming and freezing helps to keep it from sinking as much. Thaw the puff pastry overnight in the fridge and when ready to top, work fast so it stays as stiff and cold as possible.

Check under Savings for St. Patrick’s and if Easter is early and the sales have started, Easter & Lent, Leveraging the Sales for what items to shop for at great prices around St. Paddy’s Day. During the Easter sales, you might even find lamb at a semi-affordable price.

If you plan on making this stew for St. Pat’s, shop ahead for your beef. The best sales on the lesser cuts like chuck are always going to be after any holiday when pricier cuts of beef are featured, and that’s usually January (Big roasts are often served at Christmas, steaks for New Years) and February (Valentine’s generates a lot of sales on higher-end steaks.) Something has to be done with all the rest of the beef!

I hope you’ll enjoy this stew and these Beef & Guinness Pot Pies as much as we do!! And have a happy and safe St. Paddy’s day!

In a Dutch oven, cook onions in 1/2 of the butter and half olive oil, over moderately low heat, stirring, until the onions begin to soften. Place a lid on and cook slowly for several minutes, then remove and continue to stir now and then until softened and beginning to brown. Add garlic and cook until fragrant. Transfer to a bowl, and reserve.

Trim and cut beef, removing any hard bits of fat, sprinkle with salt and pepper, and toss in flour. Heat the remaining butter and oil in the Dutch oven over moderately high heat until the foam subsides. Add in the meat and cook until browned on all sides, stirring as necessary and working in batches if needed. Shake the remainder of the flour over the meat if any is left, stirring for a moment or two.

Add in the Guinness, stirring and scraping the pan, then add the broth, reserved onion mixture, thyme, sage and bay leaf and about 1/2 teaspoon of salt. Check the liquid, it should be nearly to the top of the meat. Add more broth or a little water if needed. Cover, bring just up to a boil, then turn down and simmer gently for an hour and a half, stirring occasionally.

Add in your choice of vegetables, stir, checking the liquid in the pan. It should not be so thick that the stew is beginning to stick on the bottom. Add a touch more broth or water if needed. Place the lid back on and bring back to a gentle simmer and simmer until meat and vegetables are tender, about another hour. Stir in peas.

Taste and adjust seasonings, adding more salt and a little jam to taste and a dash of Worcestershire if desired.

Divide stew into serving dishes and chill for at least 30 minutes. Fill ramekins, leaving about 1/2″ of space.

Roll out pastry dough on a lightly floured surface with a lightly floured rolling pin into a 13-inch square, about 1/8 inch thick. or large enough to cover each ramekin with a square of pastry. Trim edges and cut dough into quarters.

Stir together egg and water and brush a 1-inch border of egg wash around each square. Invert 1 square over each bowl and drape, pressing sides lightly to help adhere. Put several small slashes in the center of the puff pastry. Brush pastry tops with some of the remaining egg wash and freeze 15 minutes to thoroughly chill the dough.

Preheat oven to 425 degrees, set the oven rack to the middle and put a lipped (not an airbake) baking tray on the shelf, Place pies on pans and bake until pastry is puffed and golden brown, about 20 minutes. Reduce oven temperature to 400°F and bake 5 minutes more to fully cook dough. If the puff pastry has browned, but isn’t quite yet done, it can be covered loosely with a sheet of foil to prevent further browning.

My nutritional calculator indicated the Puff Pastry adds about 256 calories.