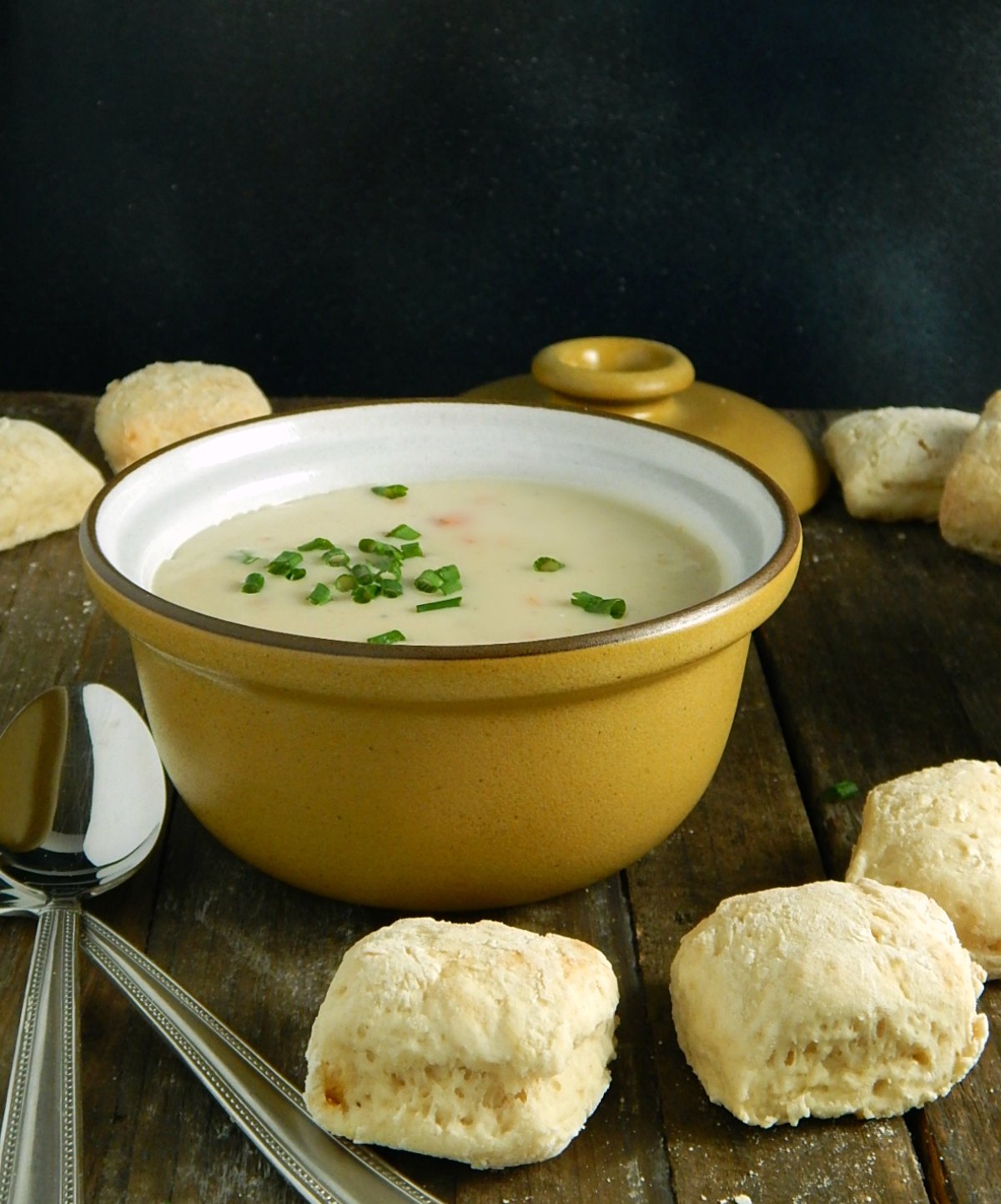 I have another recipe or two on my site from the Mill at Simon Pearce. There’s this Connemara Soup, made with leftover Corned Beef and it really is to die for and then there’s the Simon Pearce Quechee Quiche which is really an over the top extravaganza. And when I had the idea I wanted to try the Simon Pearce Vermont Cheddar Soup I wasn’t really thinking about an Irish recipe or anything for St. Patrick’s day – I just wanted a delicious cheese soup. But with St. Patrick’s Day around the corner, this would be a fantastic heart-warming soup for a dinner or party.

I do have a few cheesy soups on my site (here’s my menu for Soups, Chowders & Chilis) and they all have one thing in common, besides cheese that is! No matter what they’re made with or what kind of soup it is, any soup with cheese ranks high on my list of comfort food. Simon Pearce Vermont Cheddar Soup is no exception.

And just like you might expect from a fine dining establishment like the Mill at Simon Pearce, the Simon Pearce Vermont Cheddar Soup has just a touch of sophistication, too. Just a touch – everyone’s going to go gaga over it! The flavor’s outstanding (especially if you use a better cheese, but it still fantastic with grocery store cheddar and the texture is exquisite.

Serve it garnished simply with a few chives or as I saw in one photo on yelp with fried shallots (just use the recipe I have for Copycat French’s Onion Rings but use shallots – yeah, really!) Serve your soup with a Spring salad mix (here’s my menu for Side Salads) and a bit of bread, maybe my easy, overnight no-knead Crusty Bread or Simon Pearce’s Rory’s Scones like in my pics. That recipe is coming up next; they’re little baby soda breads. Which reminds me, you might like my Ballymaloe’s Irish Soda Bread with this, instead.

I had some trouble with the recipe for Simon Pearce Vermont Cheddar Soup…made as stated it was too thin and not very attractive and didn’t look at all like the photos I’ve seen. I fixed that in the recipe, below. Cheese soups like this thicken over time, and I’m guessing at the restaurant since soups like this are held for service, it’s made on the thinner side to compensate for that.

And maybe the original recipe wasn’t changed for the home cook. Which leads me to say that if you happen to have leftovers, they may need to be thinned with a little milk because it will be much thicker the next day. Reheat those leftovers slowly, stirring often whether using the microwave or a pan on the stove.

So this soup has all the flavor of the original Simon Pearce Vermont Cheddar Soup – I just fiddled with the proportions and slightly with the method. Although it’s not the absolute exact recipe, it’s still outstanding and has just the perfect amount of body and a gorgeous, silky texture. I believe the original recipe is in their book, “A Way of Living” just so you know.

The only other things you need to know about this recipe is that I made it a bit easier. My hands can’t take the grating of the carrots and celery. I just processed the onions and celery together in the food processor and cooked them in the butter and then minced the carrots and tossed them in the microwave instead of in a pan of water to cook, drained them and then stirred them in at the appropriate time. That keeps them from turning the lovely white Cheddar soup orange.

The most important thing to know about this soup: Don’t use a pre-grated cheese and when you add the cheese, turn the heat off and add cheese in small handfuls, stirring after each. Only add the next handful once the previous one is completely incorporated. This is so important and it going to keep the soup from separating (breaking) or the cheese from becoming grainy. Work slowly and be patient and you’ll be sure to have smooth and luscious soup.

First of all, this soup can be made with any Cheddar, from a higher-end Cheese like an aged Vermont or a good Irish or other Cheddar (I used Cabot from Costco – it was a splurge but not outrageous, especially considering how big of a pot of soup this is) or even a grocery store Cheddar. Or a combination, if you don’t want to go way out, of both a pricier and a less expensive Cheese. Shop well for your cheese if you’re buying at the grocery, look for coupons on the producer’s sites, hang tags at the store and sales. If you’d like, this can be made with a yellow Cheddar, instead.

But if you don’t have either Aldi or Costco nearby, try to stock up on items like butter, especially during any holiday sales. Butter keeps well for months in the freezer and cream will keep literally for weeks in the fridge. The high-fat content helps keep it fresh.

Simon Pearce Vermont Cheddar Soup is not just a soup, it’s an experience. From Simon Pearce Restaurant this is cheesy, silky & perfect on a cold day!

Melt butter in a large, heavy Dutch oven. Add the onions and celery and cook until softened, about 8 minutes. Add garlic and stir in, cooking until fragrant. Add the butter, whisking to form a roux and cook for a minute or two until thickened.

Add in the chicken stock, a bit at a time at first, whisking well after each addition until the mixture loosens up enough to add the rest. Add in the thyme and continue to cook, whisking often, bringing up to a simmer, until the soup begins to thicken enough to coat the back of a spoon and leaves a distinct line when a finger is run across, about 15 minutes or so after coming to a simmer.

While the soup is cooking, add the carrots to a small, microwaveable bowl with 1/4 cup of water, cover, and microwave until just tender, two to three minutes. Rinse and drain well. Once the soup has thickened, stir the carrots into the soup.

Turn off the heat and in small handfuls, add the cheese, whisking after each addition until melted and smooth before adding the next. Stir in the cream. Taste and adjust seasoning, adding salt and pepper as desired. If necessary, add half and half or milk to bring to desired consistency. The soup should be still warm enough to serve, if not bring up to temperature slowly and gently, but do not boil.

Garnish with chives or fried shallots.

Slightly adapted from the Mill at Simon Pearce