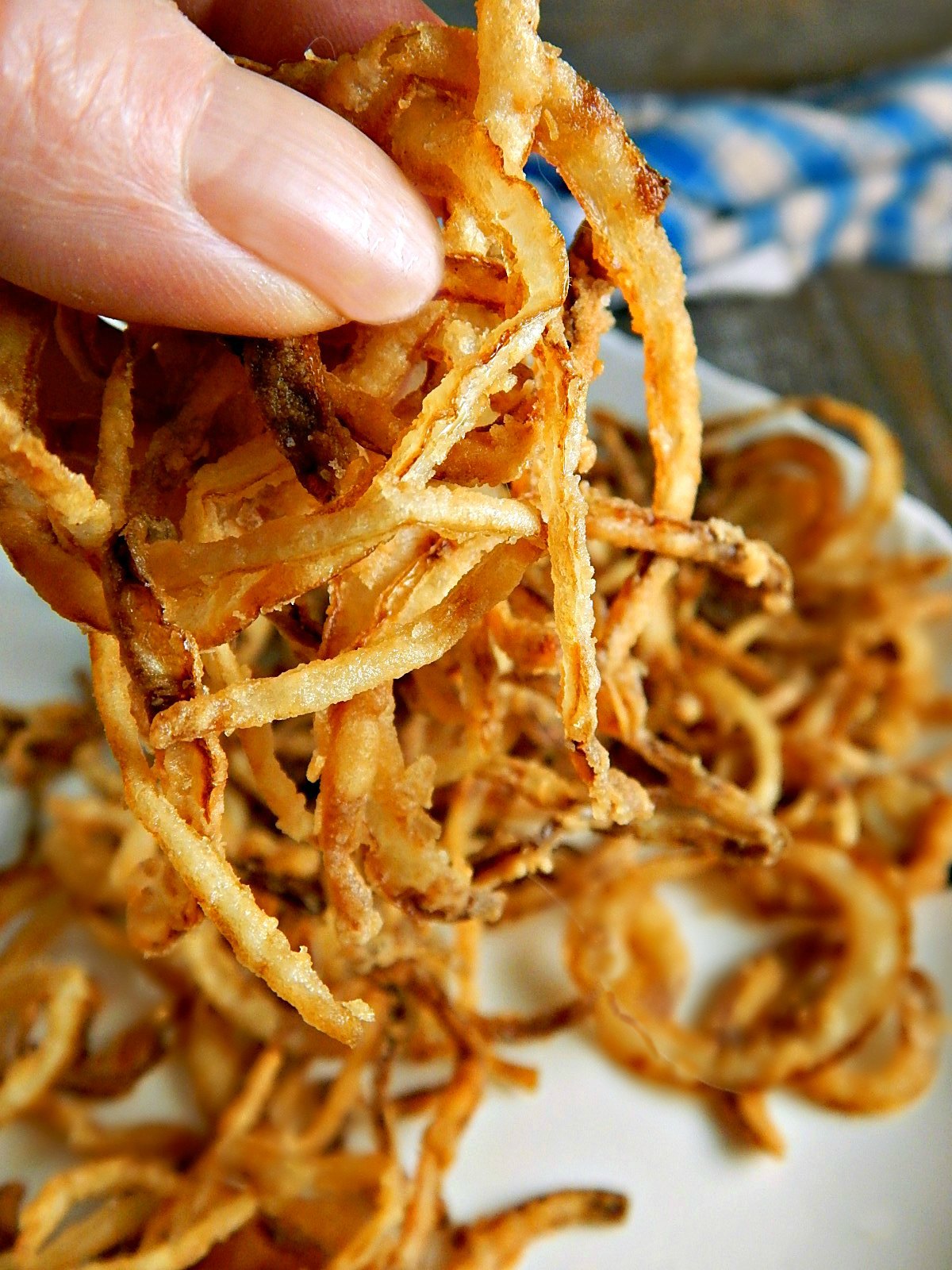 Are you a lover of French’s Onion Rings? Or are you like me and only use them once a year in that Thanksgiving Green Bean Casserole that nobody admits they like but everybody eats? I guess I’m just not that big of a fan French’s Onion Rings – or at least I wasn’t until I made these Copycat French’s Crispy Onion Rings.

Copycat French’s Crispy Onion Rings are a total game changer! Seriously better than the original. I didn’t really make these to eat (although I did eat them all, and then made more!) but there is a method to my madness. I made them to top my Bourbon Barbecue Pot Roast Sandwich. I’ve since used them to top other sandwiches, too, like my Bistro Steak Subs. These onion rings are minutes to make and make everything they’re on crazy good!

If you’re not familiar with French’s Onion Rings, they come in a package and what you get in that package are some of the thinnest, crispiest onion rings you could imagine. The downside is that the French’s Crispy Onion Rings don’t taste as fresh as homemade and you can’t control the ingredients.

This copycat version of onion rings is just about the simplest onion ring you can imagine. Unlike my favorite Crispy Vidalia Beer Battered Onion Rings (they are pretty darned incredible if I do say so, but they are quite a bit more complicated) the French’s copycat version is just thinly sliced onion rings dropped in flour and fried. Easy peasy! Made in minutes! They cook quickly and cook all the way through so there is no moistness at all. The thin onions just meld with the flour into one cohesive, crispy, crunchy deliciousness.

After I made my Copycat French’s Crispy Onion Rings to top my sandwich, I started thinking about what other ways they could be used. So I googled, and wow, there are like a zillion recipes using them. Who knew? Well not me, apparently! Check out this post from Taste of Home, for one, that lists 30 recipes that use these onion rings. I’d happily scarf down more than a few of those dishes – if I don’t keep eating the onion rings first!

The biggest thing to know about making these rings is that the onions have to be very thinly sliced. And I do mean thinly. Use a mandolin if you have one, and if not, sharpen up your knife. It helps to slice a thin slice off the part of the onion that will sit on the cutting board so you have a stable base. A thin slice won’t affect the smaller onion rings and actually has the advantage of creating a cut on the larger ones. It works great.

The Copycat French’s Crispy Onion Rings cook very quickly in hot oil, 375 degrees F. Cook them in small batches because once they’re done, they are done and will need to be removed asap! Use a skimmer to pull them out of the oil and don’t cook a batch larger than you can pick up with one pass of the skimmer or the ones you leave behind will be too well done by the time you make a second pass. Remember that fried foods darken up just a bit more after they come out of the oil so err on the lighter side of brown.

You won’t need much oil to make Copycat French’s Crispy Onion Rings. Just an inch or maybe a bit more because they’re pretty small. I like to stir the onion rings around so that I have fabulous little tangled up onion rings, just like French’s.

This recipe is so cheap to make. It’s just a fraction of the cost of the actual French’s. And they’re so much better and just take a few minutes. Now that I figured this super easy and fast recipe out, I’ll probably be making them more often. I’ll probably be using this recipe with shallots, too, for some of my Asian dishes.

I don’t know if I’ve ever seen onions on sale at the grocery, but I do like to pick mine up at Aldi where they are usually much cheaper! I go through a ton of onions as I cook. Probably, literally! So I always buy mine in the largest bags available (they’re usually the cheapest per pound) and store them away from my potatoes.

The oil is the priciest item. Here is an instance when I don’t use olive oil, but instead a good vegetable oil. It has a higher smoke point. Generally, if I make one fried recipe, I make another, too, just to get more bang for the buck out of that oil. If you want to keep it, strain it well. Keep it in the fridge or freezer, although it will be fine at a cool room temperature for a week or two.

Heat oil to 375 degrees F. In the meantime, slice onions and toss them into a mixture of the flour and salt. Gently shake off any excess flour. Drop by the handful into the hot oil. Cook two to three minutes, stirring often, until golden brown.

Remove onion rings from oil using a skimmer; place on paper towel or a paper bag to drain. Salt while hot.

I’ll be postingPerfect Instant Pot Mashed Potatoes at Fiesta Friday #241, hosted this week by Zeba @ Food For The Soul and Debanita @ Canvassed Recipes