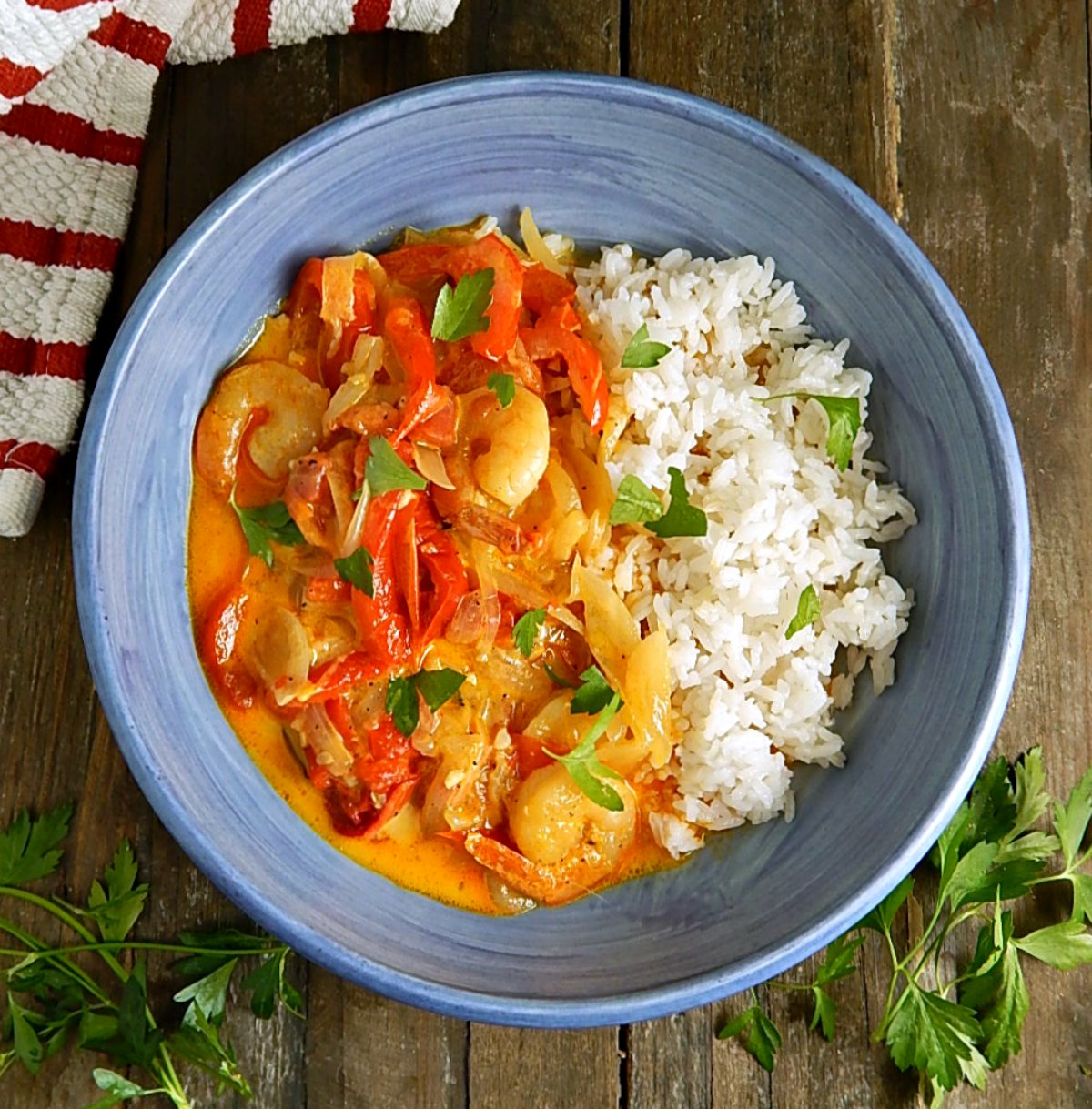 So how about it guys, do you read magazines any longer? I get so much information online that they sometimes seem obsolete. And yet I manage to subscribe to a couple of food magazines because they are just so inexpensive. And they inspire me – when I manage to get them open and actually read them! That’s how I fell in love with the idea of this Moqueca Brazilian Seafood Stew – I saw it in Food & Wine Magazine.

I was leafing through that issue and was instantly obsessing. Hello, Moqueca! Where have you been all my life? In Brazil, apparently, where it’s been made for over 300 years and is practically a national dish. I fell so in love, I actually had to show the pictures and recipe to Kraig (my son) and Tweety (his girlfriend) as I vowed to make it asap. Kraig was like, “Ok Mom…” There might even have been an eye roll. Believe me, there was no eye roll when we ate this!

So just in case you’re like me and haven’t had or heard of Moqueca, it’s called a “stew” and it’s onions, bell peppers, and a little tomato, along with saltwater fish and sometimes seafood, all swimming away in a chile spiked coconut broth. And it’s so good, I wish I had a big ol’ vat of it and I’d swim along, myself. And just in case you might be worried about the words chile spiked, this dish doesn’t have a lot of heat, just a little “personality.” And if you’ve never heard the word pronounced, you can hear it on this guide. The “q” sounds like our “k” and the “c” is hard.

In order to pull off Moqueca in Minnesota (and in budget) I had to make a few compromises, and just used shrimp instead of a mix of fish and seafood. You can’t go wrong with shrimp, amirite? Unless you’re allergic, then I’ll eat yours, lol! Seriously, I think my version is absolutely fabulous, although admittedly I have no frame of reference, never having had Moqueca before, let alone in Brazil.

I was obsessed enough that I read about 30 recipes, all about the history and looked up every ingredient I wasn’t familiar with. I’m sure my Moqueca would be even more fabulous with tons of different seafood, fresh from the sea, but using the Food & Wine recipe for inspiration, I got to cooking and am blown away by how fantastic this Moqueca is. By the way, anyone want to go to Brazil with me? We can eat Moqueca, drink Caipirinhas and learn how to Samba!

There are a couple of other ingredients I couldn’t get for my Moqueca. You can order them online if you lean that way. One was Dende oil, which is red palm oil and is said to have a distinctive flavor. I used a little Annato oil, instead, for the color. And if you can’t find Annatto oil, I have a sub for that, too. (See below.) Also, a particular chile, a jarred dedo de moça chile was a no go for me, so Fresno chile subbed in but a jalapeno will work, too. I saw a lot of recipes that didn’t use either of those two traditional ingredients, the dende and the dede de moça, so I forged ahead and am so glad I did.

A little extra flavor was added with a shrimp stock; I save any shrimp shells I have in a small Ziploc in the freezer and fortified that with the shells from the shrimp I used, but I also made this without the shrimp stock a second time when I used already peeled shrimp. It’s good either way, so I wouldn’t sweat it if your freezer isn’t filled with weird little bags of this and that like mine is. Use the shells you have them or just use fish stock if you can buy it or sub in some chicken broth.

I also wouldn’t sweat all the ingredients in the stock, especially the “cheffy” touches and unless you easily have them, just leave them out, with the exception of the shrimp and the basic veggies and most importantly the garlic. I’m just saying there is no need to run out and buy a bunch of cilantro, for instance, for a couple of sprigs. So there, now that I have completely bastardized a beloved heritage recipe, I’m just saying, it’s still fabulous.

Do use full-fat coconut milk in this recipe, not something “light” and although I’m sure in Brazil it’s probably usually made without wine, I can attest it does add a little sumpin’ sumpin to the recipe. This is the kind of dish that I would def be more conservative with the shrimp when serving the family but go all out on for company. I thought a half a pound was just about right. And of course, you really can use any size shrimp or prawns you care to use. Moqueca is normally served with rice, and though it’s not traditional, Cilantro Lime Rice (Instant Pot or Not) would be great. I chose to go with plain old white rice, though.

This is whole Annatto Seed

So the substitute for the Red Palm Oil is Annatto oil, which can be bought or very easily made. Depending on where you live, Annatto Oil is another ingredient that can be hard to find and might not be something you’d want to buy even if you find it, if you don’t make a lot of recipes that need it. If you love to cook cuisines from Latin America it might be worthwhile.

A work around is to make your own with Annatto seeds. (I do the same thing for my Pollo en Leche de Coco.) It’s super easy. Pick up a package of Annatto seeds, which are surprisingly easier to find than the premade oil. You’ll be likely to see them in the Mexican section of a well-stocked grocery or at many ethnic markets. They’re cheap and keep just about forever in a tightly sealed jar in a dark cupboard.

To make the oil, add about 2 teaspoons of the seeds to a small pan, add in 2 1/2 tablespoons of oil and gently heat, swirling until the oil is deep red, then strain. Annatto seeds are crazy hard, so make sure not to leave a stray behind. The recipe can be increased and the oil stored in the fridge for future recipes. Another substitute for the beautiful color is even easier, but not as effective: sub in 1/2 a teaspoon of turmeric and 1/2 teaspoon of paprika bloomed in 2 tablespoons of olive oil.

I’ve long given up any grandiose ideas of running down to one of the seafood markets here in the Twin Cities and picking up something that was just flown in (and if you do that, have me over for dinner when you make this!) and frankly, the fresh seafood at the grocery can be iffy and pricey.

For the budget-minded, you really can’t go wrong with frozen. I like to shop the best sales and chuck it in my freezer. It’s all about timing. I find fantastic deals on fish and seafood during the sales that happen in the weeks prior to Christmas (Advent) and New Years, a few good sales before Valentine’s day, and the best sales during Lent (the weeks prior to Easter.) Aldi and your buyer’s club have decent prices on shrimp, too, but they don’t begin to rival a good sale price at the store.

I prefer to buy the easy-peel frozen shrimp. They don’t get so wet, soggy and waterlogged as the already peeled shrimp do when unthawed. To thaw easily, take them out of the freezer the night before, lay them out on paper towels in a glass pan, cover and refrigerate. It makes a difference. To thaw quickly, put them in a strainer and run cool water over them.

Peel and refrigerate shrimp until ready to use. Combine shells, 4 cups water, onion, carrot, celery, cilantro, thyme, garlic, and salt in a large saucepan. Bring to a simmer over medium; cook, stirring occasionally, until mixture reduces to about 3 cups, about 30 minutes.

Pour mixture through a fine wire-mesh strainer into a bowl; discard solids. Set stock aside until ready to use. (Stock can be stored in an airtight container up to 5 days in the refrigerator or up to 1 month in the freezer.)

Bring a large saucepan filled with water to a boil over high. Add tomatoes; cook until skins begin to loosen, about 30 seconds. Using a slotted spoon, transfer tomatoes to a bowl filled with ice water; let stand until cool, about 5 minutes. Remove from ice water; peel and discard tomato skins. Remove and discard seeds. Chop tomatoes into 3/4-inch pieces. If using canned tomatoes, open each tomato, discard andy seeds and chop into 3/4 inch pieces. Extra tomatoes from the can may be frozen in their juices until another use can be found for them. Set aside.

Add wine; cook, stirring occasionally until mostly evaporated, 6 to 8 minutes. Stir in shrimp stock; bring to a boil over medium-high. Reduce heat to medium-low; simmer, uncovered, until mixture reduces by half, about 30 to 40 minutes. Reduce heat to low; stir in coconut milk, salt, and pepper. Add shrimp and cook, stirring occasionally, until opaque and cooked through, 2 to 3 minutes. Stir dendê oil or substitute. Taste and adjust seasonings.

Serve over rice with lime wedges; garnish with cilantro or parsley leaves or green onion.